It may lack the headline-grabbing features of the mainstream brands, but as a home cinema engine the AVR450 boasts a solid spec. In terms of power Arcam quotes 90W per channel (all channels driven) or 125W (two channels driven). 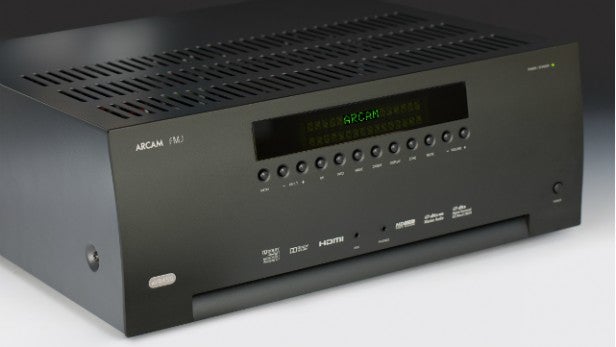 You’ll also find Dolby Pro Logic IIx and DTS Neo:6 for expanding stereo sources to pseudo 5.1 or 7.1. However, you won’t find the newer front height and width modes, such as Dolby Pro Logic IIz, DTS Neo:X and Audyssey DSX – clearly Arcam believes its audience have no need for these, even at this price.

There is Dolby Volume, however, which smoothes out the differences in volume levels between sources and content maintains the optimum EQ regardless of the overall volume level.

Hook the AVR450 up to your router via Ethernet and you can stream music directly from uPnP devices, such as PCs and NAS drives. The unit supports MP3, WMA, AAC, WAV and FLAC, which you can also play from USB drives.

You can also stream internet radio via the built-in vTuner portal, a handy companion to the DAB and FM tuners (the AVR380 lacks DAB). The AVR450 can also upscale video sources connected via HDMI in any resolution up to 4K, but select the Bypass mode to leave video unaltered.

Inevitably some people may wonder why there aren’t more eye-catching features for the money. After all, even sub-£500 receivers from the likes of Onkyo and Pioneer throw in shedloads of features like Wi-Fi, Bluetooth, Spotify and AirPlay. But this is not a machine designed to appease the wireless gadget-toting generation – it’s an old-school amp aimed at cinephiles who want the very best performance. 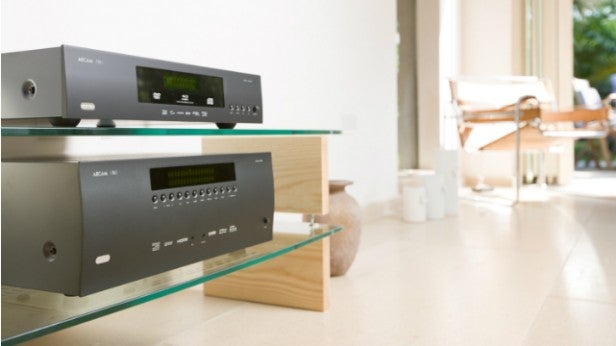 Despite being aimed at those who know what they’re doing, the AVR450 is surprisingly easy to use. Even the doorstop-like manual reads like a beginner’s guide, detailing every aspect of the unit’s functionality as if an eight-year-old was setting it up. But that can only be a good thing.

There’s even an Auto Setup mode, something we thought would have audiophiles running for the hills, but some users might like the convenience. It works in the usual way – a microphone is connected to the front panel and the Arcam plays test tones from each channel to work out the best settings (size, distance, level and crossover).

It also calculates the appropriate EQ filters for your room to cancel out resonant frequencies. Helpfully it’s not one-size-fits-all – the Arcam lets you apply Room EQ to individual inputs in the setup menu (you might like to leave it unaltered for stereo music playback, for instance). As with any auto setup feature don’t treat the results as gospel – it’s always worth checking the results for any discrepancies, but it performed accurately during our test.

The AVR450 is also a breeze to operate, going about its business with minimal fuss and reacting quickly to remote commands. Switching between inputs and tweaking performance is quick and easy. The only area where it falls down is when controlling an iPod (Nano 7G) – you can skip tracks, play and pause but you can’t explore the menus using the Arcam’s remote, plus the lack of cover art is a shame.    Onscreen presentation is simple and unfussy, a far cry from the attractive menus of the Marantz SR6008. The setup menu uses a bright blue background, basic white boxes and black text, which looks like something from the mid-90s but at least the straightforward structure makes it easy to navigate. It’s no-frills stuff, but those who put performance above presentation aren’t likely to be phased.

There’s a vast amount of options to tweak. You can manually configure the speakers if the Room EQ settings aren’t quite right, while network, HDMI, input assignment, zone and sound settings are all within easy reach. 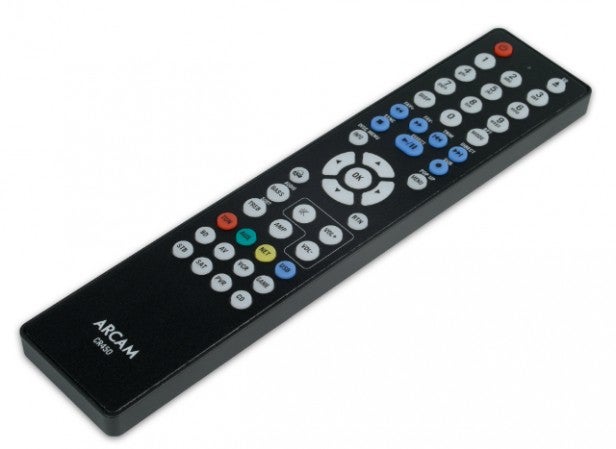 It’s all controlled with a surprisingly simple remote (CR450). This slender zapper houses individual buttons for each input at the bottom, some of which are colour-coded, while the direction pad and playback controls are helpfully located and labelled. You’ll also find bass and treble controls and a button at the top that lets you turn the EQ settings on and off.

It’s also a universal remote, which means it can control up to eight devices and learn commands from your existing remotes. You can also use your iPad to control the AVR450 by downloading the ArcamRemote app.