At first glance the AQ Audio SmartSpeaker may seem like a smart but somewhat unremarkable portable wireless/AirPlay speaker in the vein of the JawBone Jambox or Audyssey Lower East Coast. But it has one very neat trick up its sleeve that makes it a very tempting proposition; pair two of them together and you can create a pair of completely wireless stereo speakers. Does this make it the ultimate wireless speaker? Yes and no… 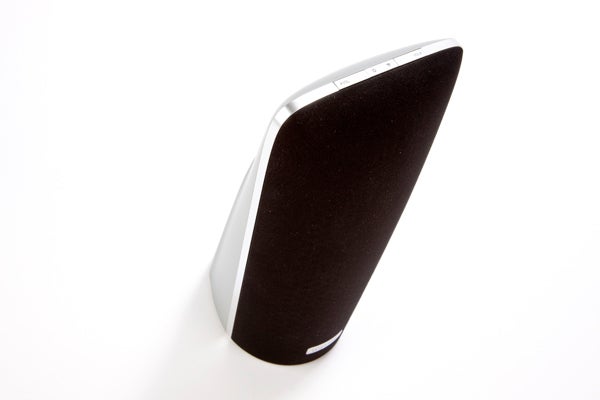 As we’ve come to expect from the recent slew of wireless/AirPlay speakers, the SmartSpeaker is a device designed to impress visually as well as sonically. The flattened tube shape combined with a simple tri-tone black-silver-grey colour combo looks great from almost any angle – even the thick red rubber foot has charm to it. It’s all smooth, unctuous curves in near perfect combination.

It’s not just the shape and colour choices that make it, though. What really sets it off is the subtly high-quality fit and finish. The black speaker fabric is perfectly fitted, the controls are neatly integrated into the silver trim and that grey plastic back feels strong but soft to the touch.

It’s actually a little bit lighter than we might expect given its aspirations of high-quality audio, and that it has a sizeable battery in it. But this does of course make it even more portable. With dimensions of 245 x 135 x 109mm (H x W x D) it’s not exactly pocketable or day-baggable but it’ll fit in a suitcase ready for deployment in a hotel or such, and it’s easy to carry round the house or out into the garden. 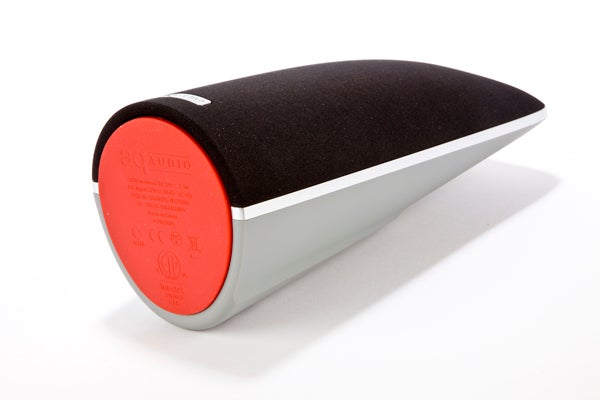 The SmartSpeaker offers two ways to connect to it. The primary way is via Apple’s proprietary AirPlay Wi-Fi audio standard but there is a 3.5mm jack on the back too for connecting any other sound source.

More often than not AirPlay can be a bit awkward to setup but AQ Audio has made things astonishingly easy here. Simply plug your iPhone/iPad/iPod touch into the USB port on the back, using your normal iDevice docking cable, then press the two volume buttons on the SmartSpeaker. A prompt will appear asking if you’re happy for the SmartSpeaker to look up the Wi-Fi settings from your iDevice. Click ‘yes’ and job done. 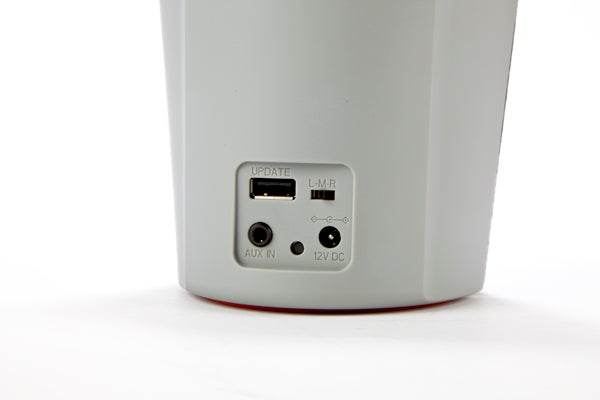 You can also download the AQ Audio app from the app store, which lets you rename each speaker and manually input the Wi-Fi settings.

Once connected you can simply select the SmartSpeaker from your AirPlay devices and start playing. The only downside is that there’s no way to connect over Wi-Fi networks that require web browser authentication, such as found in hotels, public hotspots or indeed our office – a common, and fundamental, AirPlay issue. 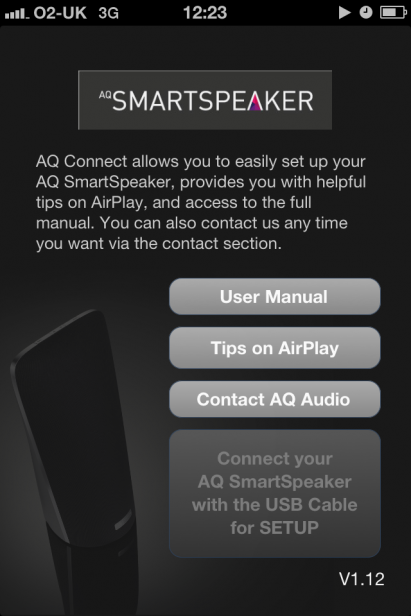 You can also connect the SmartSpeaker to a computer using iTunes. Once the speaker is connected to your Wi-Fi it will appear as an AirPlay option in iTunes and it’s just a simple case of selecting it.

But it’s here that the really clever trick of this speaker comes in. Connect two SmartSpeakers to your Wi-Fi and using the little switch on the back of each speaker you can tell them to be either a right or a left channel, creating a completely wireless stereo speaker arrangement.

Sadly, though, you can only set this up through iTunes at the moment, not using an iOS device, which is a real shame being as this is the device’s big party trick.

On the flipside, you can use the SmartSpeaker to playback the audio from all manner of apps on your iPhone or iPad – apps such as iPlayer or Spotify – whereas you have to install a special extra app on your PC to do this. It’s called Airfoil and you can find the instructions on how to set it up on the AQ Audio website. 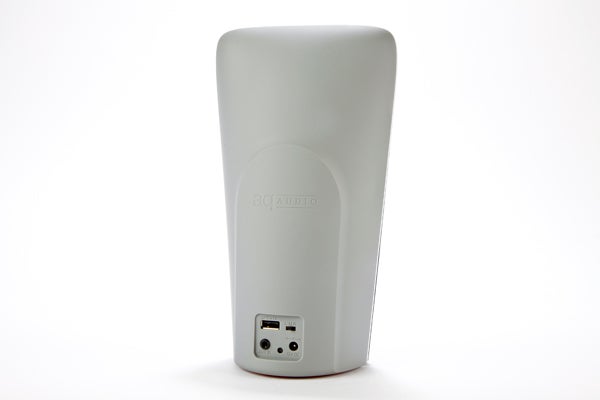 A few months ago that was your lot, and as such we were left wanting in our original review but, as promised, AQ Audio has now released new firmware and apps that significantly boost the SmartSpeaker’s capabilities. For a start you can now download Android and Windows Phone apps for wirelessly streaming from those devices. Plus, you can now setup wireless connection from an iDevice to the SmartSpeaker without an existing Wi-Fi network using AQ Direct. In other words, you can now truly take the SmartSpeaker anywhere and have wireless sound.

These updates have transformed The AQ Audio SmartSpeaker from a slightly niche product to a real all-rounder, though the lack of Bluetooth still makes it a little less versatile than some.

We mentioned the AQ Audio SmartSpeaker seemed a
bit lightweight for a truly high-end piece of audio equipment and sure
enough its sound quality is a little weaker than we remember when we
first listened to it demoed many months ago. That said, there’s still an
impressive amount of power on show here.

With a 25W peak output,
one of these speakers will out pace the likes of the Jawbone Jambox and
Jabra Solemate and fill with undistorted sound a small to medium sized
room or tent, plus it should easily be sufficient to keep you
entertained while in the garden. Pair them together and you’ve quite
clearly got double the power too. 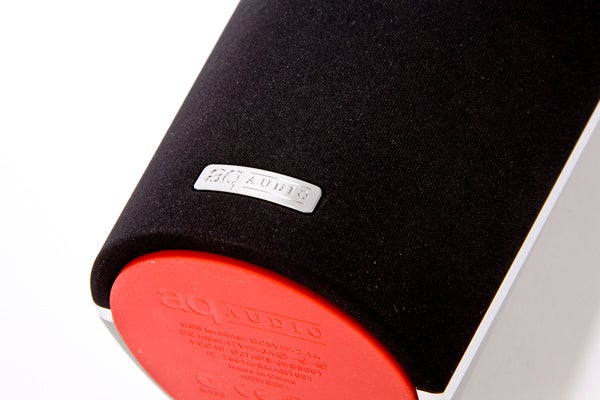 Back
to the bass, though, and it’s about on par with battery powered units
of its size but we have heard better. The Pasce minirig, for instance,
delivers deeper tones and generally has more clout despite being markedly smaller, though
this in turn leads to it having a slightly muffled sound when kicking
out bassy tunes.

More surprising than the slightly weaker than
expected bass is the mediocre fidelity. There’s a lack of sparkle to the
top-end giving a slightly flat feel to music. In fairness, it’s a sound
signature typical of most smaller battery powered audio devices but we
had expected a little more for the size and price. 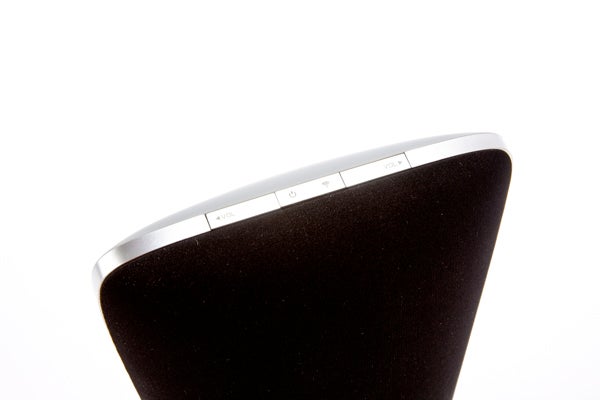 Not
helping our overall impression, however, was the intermittent
connection we were getting over our Wi-Fi. With a router setup in a
downstairs living room and the testing mainly done in a first floor
office, the speakers constantly struggled to maintain a steady
connection, and when they did you could hear that the bit-rate (reduced
by AirPlay because of the poor bandwidth) was very low leading to poor
sound quality. This is less an issue with this particular product as
with AirPlay in general, though, and using AQ Direct mode eliminated this.

As for the signature stereo
speaker setup, we were impressed that they created a convincing stereo
effect, and due to their completely wireless nature it’s easy to place
them wherever you need to get that audio sweet spot. The ultimate sound
quality isn’t exactly Hi-Fi but it’s pretty good and a great option to
have.

As for longevity, AQ Audio’s claimed 10hrs on a full charge
seemed to tie-in with our experience, and the unit charges up pretty
quickly in between uses too. You can also charge your USB devices from
the USB port, saving you having to carry around a separate USB charger. 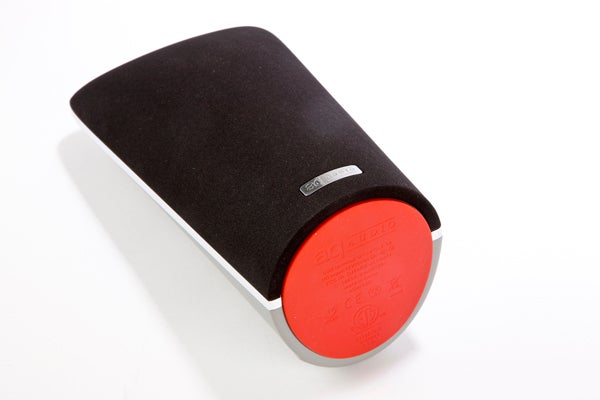 Priced at £159.99 the SmartSpeaker’s audio performance is in line with what we’d expect, and indeed it’s better than most
portable, wireless competitors. The Jawbone Jambox, the Jabra
Solemate and the Braven 650 all offer similar features based on Bluetooth connectivity, have 10-15hour battery life and cost around £150 but the SmartSpeaker out performs them all on the audio front – though it is markedly bigger.

Other alternatives include the irrepressible Pasce minirig
if you don’t need wireless and just want the biggest portable audio performance
from the smallest space. Or, there’s the £329 Libratone Zipp which offers the same AirPlay (with direct mode) technology but a much beefier sound, though at twice the price it’s not without fault either. 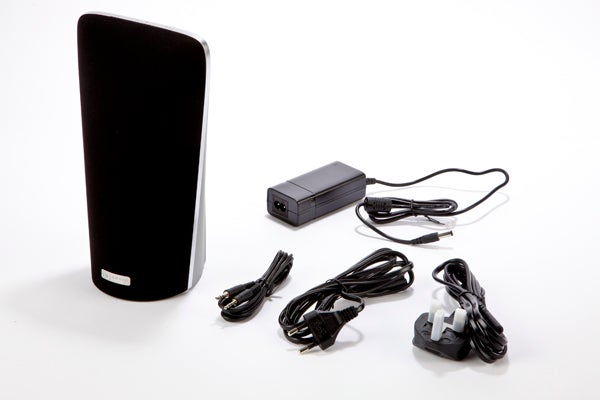 The
AQ Audio SmartSpeaker is a clever and stylish portable AirPlay speaker
that’s beautifully built, sounds decent and whose party trick of being
able to pair up and create a stereo speaker arrangement is unique and
innovative (even if you do need to buy two to do it). And priced at ~£150, it’s bang on in terms of price.

Thanks to its recent updates it’s also now a very versatile system that can be used to offer wireless sound wherever you are. We still think it straddles a slightly odd line whereby it’s large enough to be a bit limiting in its portability yet not powerful enough for regular home listening but considering the features on offer for the price this is a great buy.