The screen on the Watch 2 is the same size and resolution as the Watch, but it benefits from improvements. Apple claims this is the brightest screen it has ever made – and I can believe it; it can be viewed on the sunniest of days without issue.

As with any display of this size, there are limitations. It works as a touchscreen, of course, but also has benefits from Apple’s clever Force Touch technology, so you can access further options the harder you press. Note that this is the same “Taptic Engine” tech that featured in the first Apple Watch; it was improved to offer greater levels of sensitivity as Force Touch in later iPhone models. 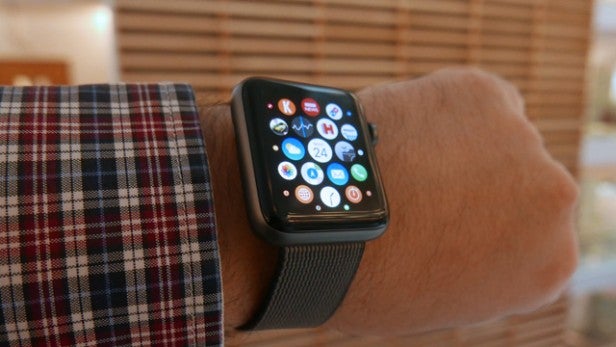 The need to type is kept to a minimum – trying to input the PIN correctly to unlock it is tricky enough. Icons are easy enough to hit and swiping from the edges to access settings works well. Then there’s watchOS 3’s handwriting recognition, which is surprisingly handy in a pinch, too.

You can zoom in by tapping two fingers on the screen but I found this made the text too large to read, requiring me to scroll letter to letter in some apps.

The clever speaker is loud enough to comfortably have a conversation with someone while your hands are otherwise engaged. I’m not a huge fan of talking to my wrist, especially in public, but I found the speaker and mic just about strong enough for me to chat away outdoors with both hands on a pushchair. 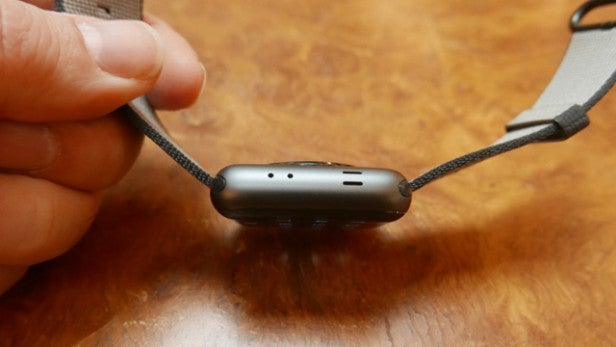 Voice recognition is very good, too. Speak to Siri and she’ll immediately jump to attention to dictate a message, look for something, or start an app.

There’s a brand-new processor in the Apple Watch Series 2, and it makes the smartwatch tick along more smoothly than ever.

I wasn’t of the impression that the original Apple Watch was particularly sluggish, and its only on using the Watch 2 that I’ve come to realise how slow it was. Apps open quickly, with everything being a little more immediate. The biggest difference can be seen when switching between apps. You can now jump from your calendar to the Activity app in an instant.

watchOS 3 now allows developers to keep their apps in the Apple Watch 2’s memory once opened. This means they open up many times faster than before. It makes a huge difference. 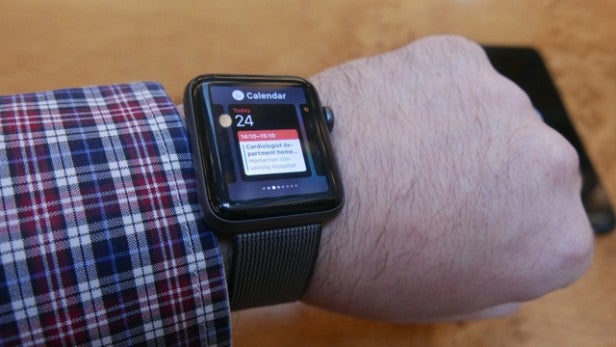 Open apps remain in the dock and you can decide which to pin there. I’ve opted to have the Withings Home app here; I use it as a baby monitor. It means I can see how my child is sleeping in an instant by pressing the side button.

You can pin apps directly from the smartwatch, but the easiest way of managing them is using the Watch app via an iPhone.

This lets you personalise your Apple Watch 2 and tweaks settings that aren’t available on the device itself. There’s an awful lot in the app, and as a result it isn’t the easiest with which to becomes accustomed. But persevere and you’ll find all sorts of tweaks, including altering screen brightness and the hand and orientation you have the watch on. No-one likes an upside down watch face.

As already mentioned, there are now a greater number of watch faces to choose from, and they can be changed more easily than before. Simply swipe right to left to switch faces. Of course, you can still alter what each face displays, so you can add your own shortcuts to apps (called Complications in the Watch app) or have information such as the weather constantly available. 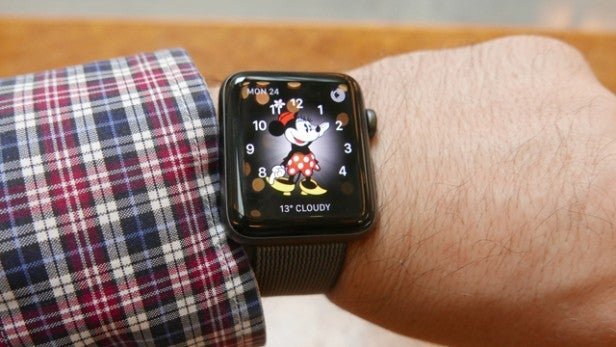 Being able to quickly switch watch faces is a curse as well as a blessing. I prefer a version of the Activity watch face and I’m not fussed about regularly changing it. However, I often inadvertently switched to something I’m not that keen on, such as Minnie Mouse. It’s a minor irritation, but it did happen quite often.

There’s one final addition watchOS 3 has brought to the Apple Watch that’s worthy of a mention: Emergency SOS. Hold down the side button for a few seconds and the Emergency SOS option appears. Press it and the Apple Watch begins to make a loud beep, with the emergency services dialled via your phone – depending on the region you’re in. For example, in the UK it dials 112, while in the USA it’s 911.

Storage is available on the Apple Watch Series 2, but it’s limited. You can use up to 2GB for music and 75MB for photos. That equates to about 400 songs, and is useful if you intend to use the Apple Watch 2 – minus an iPhone – with a pair of Bluetooth headphones while out for a run.