What is the Apple Smart Keyboard?

To make the most out of Apple’s biggest tablet ever – the iPad Pro – you’ll need a full Qwerty keyboard. Currently, there are two available: one made by Apple and the other by Logitech.

The Smart Keyboard we’re reviewing here works both as a keyboard and as a screen protector when not in use. It’s thin, tough, water-resistant and very expensive at £139/$169. 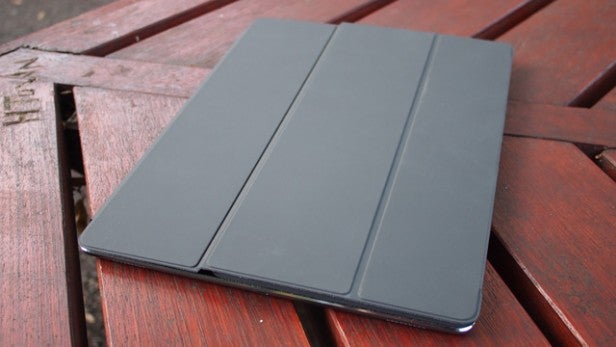 The Smart Keyboard connects to the iPad Pro magnetically, rather than via Bluetooth. Three small dots on the left edge of the Pro allow the keyboard to be powered using the iPad’s battery, as well as allowing for data transfer. This means the keyboard doesn’t need to be set up as a Bluetooth device, nor does it need to be charged, and it’s simple to detach when you don’t need it.

To use it, simply snap it on to the iPad Pro and flip it to typing position. The onscreen keyboard will disappear., after which you can simply start using the physical keys. It takes less than 10 seconds to get it working.

So setup is slick, but what about the keyboard itself? 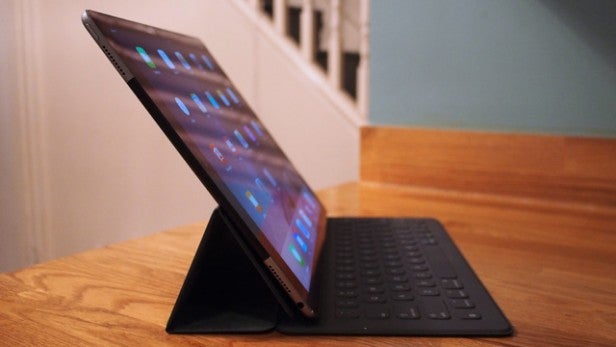 It’s thin and light, and covers the screen when not in use – the back remains unprotected. The keys are covered in a tough layer of fabric that’s not only tactile but also means ensures there are no minute gaps for liquids to get in. If you do spill some hot coffee on the keyboard, you can simply run it under the tap. I’d remove the iPad Pro first, though.

In typing mode, the Smart Keyboard provides a surprising amount of stability. The iPad Pro rests on a strong folded triangle, and the base is stiff and solid. Typing on your lap is just as comfortable and stable as using a laptop. In fact, in some ways more so. This is because, first, the keyboard doesn’t become hot in the way a normal laptop will; and second, the soft fabric that makes up the base of the keyboard provides some extra grip. 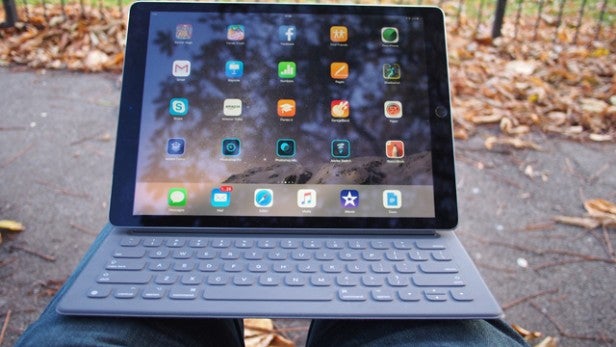 The iPad Pro’s screen can rest at only one angle. It’s quite laid back, which is fine while typing but not ideal for just resting the device on a bedside table for a late-night Netflix session. This is one area where the Microsoft Surface Pro 4’s adjustable kickstand proves more adaptable.

If you’re intent on purchasing the Apple Pencil with the giant iPad, it’s also worth noting that neither the Smart Keyboard nor Logitech’s offering provide any storage for it.

The keyboard is comfortably wide. Not once did I suffer from that cramped feeling often experienced when using a Bluetooth keyboard with the iPad Air 2.

There’s ample room between keys to ensure accuracy is good too, and even though the keys have a low profile, there’s enough travel and springiness to let you know that a key has been pressed. The Smart Keyboard feels more like a proper keyboard than touch-style ones. It’s almost as quiet as them too, which is great if, like me, you’re not a fan of clacking keys. 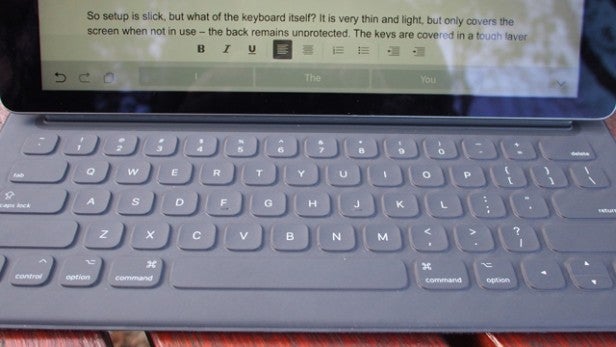 All the keys you’d expect to be present on a Qwerty keyboard are there, with the addition of a language key that lets you easily switch between languages. Currently, the Smart Keyboard is only available in a US layout; a UK version is on the way.

Shortcut functions on OS X versions of apps such as Pages and Keynote also work using the Smart Keyboard. However, not all apps use them at the moment – Google Docs users will need to wait for Google to update the apps with shortcut support, for example.

On the plus side, some app controls drop to the bottom of the screen, near your fingers, when you’re using the keyboard. This makes it simple to make text bold, for example, without moving your hands too far away from the keys.

Unfortunately, there are no shortcuts to tweak the iPad Pro’s settings via the keyboard. If you want to alter volume, brightness or pause then you’ll need to make the changes via the display. The only iOS 9-specific key you get is an equivalent to the Home button. It’s something the CREATE Keyboard from Logitech tackles much better thanks to a host of dedicated keys, making it less of a distraction to make tweaks while working.

Unlike the CREATE keyboard, the Smart Keyboard isn’t backlit, so typing in low-light could be an issue for some. 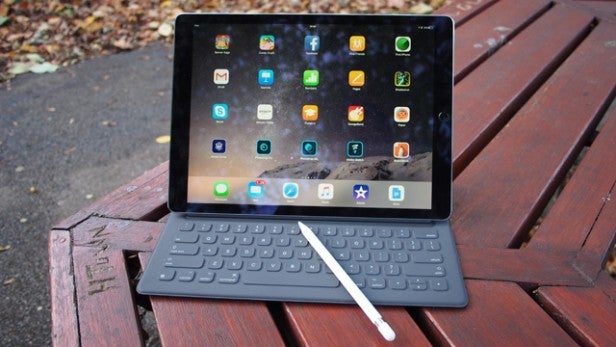 Should I buy the Smart Keyboard?

If you want to be able to type at speed while also maintaining the iPad Pro slim and light frame then the Smart Keyboard is, currently, the only option. However, the single, laid-back screen position, lack of shortcut keys and any rear protection mean that for many Logitech’s feature-packed keyboard will be the better option. It’s also cheaper at £110/$149.

Decent key action, plus the fact that it’s slim and light, isn’t enough to make up for the Smart Keyboard’s shortcomings – the biggest being its price.