With all the talk of the fourth generation iPhone leaks and the much-vaunted iPad, it’s easy to forget about Apple’s MacBook Pro range. It’s understandable really as the range hasn’t seen a cosmetic update since the aluminium unibody chassis was introduced, but that hasn’t stopped Apple from improving the range in its recent update.


This year’s MacBook Pro refresh is notable for two things: 1) the introduction of Intel’s barnstorming Core i5 and Core i7 processors; and 2) the ability to switch between the dedicated graphics and Intel’s more frugal integrated graphics. It’s a potentially powerful mixture, combining close to desktop levels of system performance with battery life claims of around eight to nine hours.


It helps, of course, that the MacBook Pro design still knows no equal a good two years after its release. Like all things, it’s possible to find fault if you try hard enough, but even now when a MacBook Pro arrives in the office it draws envious glances. Even the best imitations, such as the HP Envy 15, struggle to hold a candle to the elegance and engineering quality on show here. 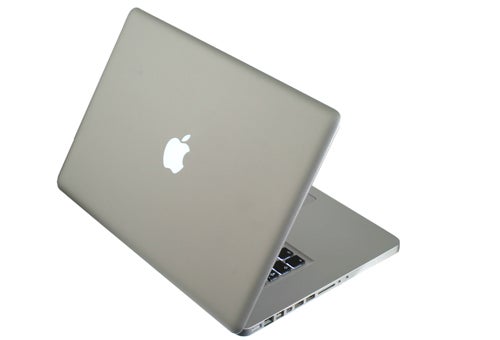 No amount of “elegance and engineering quality” will help you encode an HD video though, which is where the hardware refresh comes in. Our particular model is the entry-level 15-inch spec (MC371B/A), which features a dual-core Intel Core i5 running at 2.4GHz, 4GB DDR3 RAM and a 320GB hard drive. Dedicated graphics is supplied by a 256MB Nvidia GeForce GT 330M, which pumps images to the 15.4in, 1,440 x 900 pixel LED backlit display.


This is an okay spec, but considering you’ll be paying in the region of £1,500 it’s difficult not to feel just a little hard done-by. We reckon the 1,680 x 1,050 pixel display option, which is an additional £80, ought to be the standard. A larger and faster hard drive would be nice, as well; instead you must pay £120 extra just to get a 7,200rpm, 500GB drive. Just 256MB of video memory will prove a limitation if playing games, too.

Such disappointments seem to be a regular feature of any Apple product review, which is one of the reasons (one of many) why the company divides opinion so much. As ever it comes down to how much value you place on the peripheral elements, such as the design, usability and refinement, which are generally missing from rival Windows vendors.

Examples of such refinement can be found all over. Apple’s implementation of the multi-touch touchpad, with its incredibly smooth glass finish and ingenious integrated click mechanism, still makes other laptops feel inadequate by comparison. It’s a fact helped by the excellent integration of multi-touch into Mac OS X, which still has an edge over Windows despite the latter’s recent improvement. 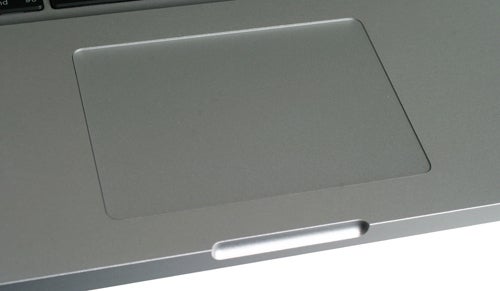 Another example is the display. Okay, so we’d like a few more pixels to play with, but there’s little faulting the actual quality of the panel. Crisp, bright colours, wide viewing angles and deep blacks make the displays on the MacBook Pros among the best you’ll find among laptops. And should you find the default colour mode – which is clearly tailored for videos – not to your liking, you can quickly switch to Adobe RGB or sRGB settings for colour critical work. You can also specify an anti-glare display, but it’s a sizeable £120 extra.


Returning to the input devices, we have the same backlit keyboard found on all the MacBook Pros. Suffice it to say that it’s excellent. Keys have a nice sense of depth and ping back sharply, ensuring brisk and accurate typing. Those new to MacBooks will find the layout takes a little getting used to, but veterans will be right at home. It’s also great how the backlighting, which like the brightness of the screen is regulated by an ambient light sensor next to the webcam, only comes on when it’s warranted. 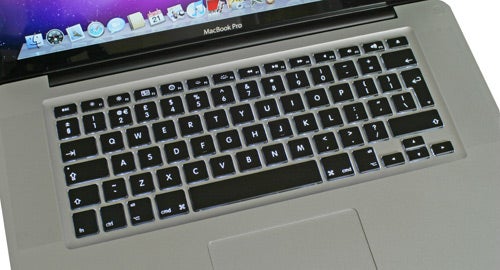 All these plus points are tempered, as ever, by the relatively limited connectivity. Clustered on the left edge it comprises the nifty mag-safe power input, Gigabit Ethernet, a FireWire 800 port, Apple’s mini-DisplayPort output, two USB ports, a memory card reader and two audio jacks. Bluetooth and Wireless-N Wi-Fi are, as you’d expect, included as well. Unfortunately, much to our continued irritation, Apple isn’t offering Blu-ray as an option at all and it looks increasingly unlikely that it ever will.


One thing we’re constantly surprised by in MacBooks, though, is how good the speakers are. While they don’t compete with the elaborate multi-channel systems found on some laptops, the stereo drivers do offer up excellent clarity and plenty of oomph. You could happily enjoy a TV drama, online video or some music without resorting to a set of headphones. 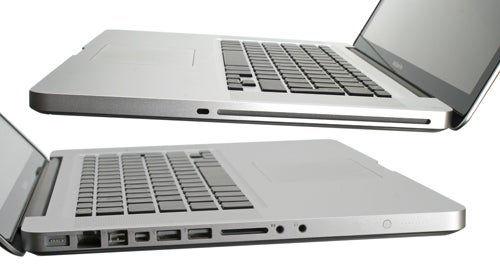 Another more integral part of the MacBook experience is the software. We’ve touched upon Apple Mac OS X 10.6 (Snow Leopard) already, but also included is Apple’s excellent iLife 09 software suite. This encompasses a wide range of utilities, but particularly useful is iPhoto and iMovie – Apple’s video and photo suites that handle both organisation and editing. Together with GarageBand, iWeb and iDVD, they add a great deal of value.

Measuring the performance of Apple systems is always complicated by the narrower point of reference we have; unlike Windows systems, we only get to test MacBooks once or twice a year. We run a couple of tests to measure system performance, one using the popular synthetic benchmark X-Bench and another encoding HD video using Handbrake.

In X-Bench we can see the Core i5 powered MacBook Pro has a decent advantage over the MacBook Pro 13-inch we reviewed last year, but given the disparity in specs this much is to be expected.


What really highlights the speed of the Core i5 is our HD video encoding test. Here our MacBook Pro review unit chomped through our task, which involves re-encoding an MPEG-4 video, in just 191 seconds (3mins, 11secs). Considering this is just the entry-level option, other choices being a 2.53GHz Core i5 and 2.66GHz Core i7, it’s clear the new MacBook Pros should tackle pretty much anything you throw at them.

It’s even more impressive when the outstanding battery life is factored in. We tested this by running a DVD on constant loop with the brightness set to 50 per cent, which lasted exactly 400 minutes (6hrs, 40mins). We’ve known ultra-portable laptops unable to match this result, and our subjective everyday testing showed Apple’s eight to nine hour claims aren’t that far from the mark.


This is a very important point, too, since it makes the MacBook Pro more than just a powerful, desktop-replacing laptop: it’s a powerful, desktop-replacing laptop that you can use all-day without charging. This isn’t something many (if any) similar laptops can lay claim to, which adds a great deal of value for anyone who needs that kind of flexibility.


While the cost of the new MacBook Pros makes it unlikely to convert sceptics, die-hard Apple users will appreciate the evolution of this refresh. Both performance and battery life are increased noticeably and Apple’s design flair and refinement remain unmatched. If you’re overdue an upgrade, or looking at your first foray into Mac ownership, the 15-inch MacBook Pro is a fine option.