Apple’s new Unibody, aluminium manufacturing process was extremely welcome on the 13.3in line of MacBooks, but this October’s product range refresh was of far less significance to the MacBook Pro line-up. Those 15.4in and 17in had already had an aluminium chassis for donkey’s years. In fact, were I feeling cynical, I might accuse Apple of resting on its laurels.


Not, I hasten to add, that sticking closely to a tried and tested formula is necessarily a bad thing. As we said in our review, the last generation MacBook Pro was damn-near flawless, falling down only on price. Arguably, then, aside from a little spit and polish there was little that Apple needed to do with this renewed MacBook Pro range. 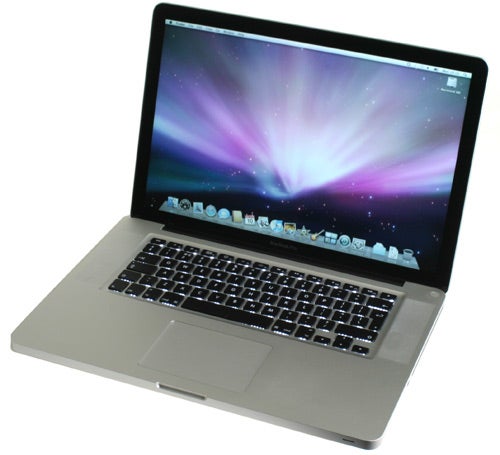 Fundamentally, the last-2008 MacBook Pro can now be looked at simply as a 13.3in MacBook with a slightly larger chassis, some faster CPU options (rumour has it an Intel quad-core mobile CPU will be offered next year) and an additional, dedicated GPU. Apple boasts that this makes it perfect for professionals, especially those using software tailored to be GP-accelerated by the nVidia chips the MacBook Pro uses – Adobe’s CS4 line of products, for example.


I actually think Apple has made a bit of a blunder with the latest MacBook Pro, though. You see, I think most of the professionals that Apple is targeting with this product range would go for the 17in model, not the 15.4in machine. Were I buying for myself, I’d definitely want the 1,920 x 1,200 resolution panel in a 17in chassis – whether that be for editing images, word documents or HD video files. 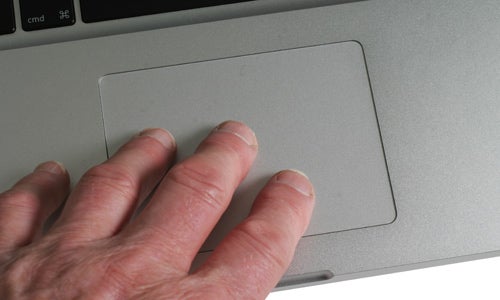 Apple, though, in its infinite wisdom, hasn’t updated the 17in Pro to the new chassis and internals yet, for some bizarre reason. Thankfully Apple isn’t killing off that system, it’s just coming a bit later, but I can’t help but think this review would have been far more positive if a 17in MacBook Pro were sitting in front of me now.


However, I’m getting slightly ahead of myself. The MacBook Pro does have some redeeming features and it would be extremely negligent of me not to give them due discussion. Without further ado, then, let’s dive in.

Aside from the obvious – that is, a larger chassis and high resolution screen – there are a couple of other features the MacBook Pro has over the MacBook. One is the inclusion of a FireWire port, presumable so as not to annoy those professional types who went out and bought FireWire-equipped video cameras knowing that data could easily accessed and edited on the last-generation of Pros.


The other feature the MacBook Pro sports which the MacBook doesn’t is an ExpressCard slot. Once upon a time I would have praised such an addition, but in this day and age I’m pretty ambivalent as most of the additional functionality which used to be provided via the ExpressCard interface is now built into most laptops. And the only feature which often isn’t, HSDPA, is now available in a much more convenient (not to mention universally compatible) USB form.

On the plus side, the illuminated keyboard which was an upgrade item on the MacBook, is standard on the Pro. Personally I am a big fan, although I still prefer the lighting method seen on ThinkPads – a downwards facing LED – as it can also be used for reading paper – perish the thought! The brightness of the LEDs under the MacBook Pro’s keyboard is adjustable, too, either manually or automatically in relation to ambient light conditions. I’d leave that option turned off, though, as I find it frankly useless at setting a suitable level of illumination.


One aspect the MacBook Pro shares exactly with the MacBook is its keyboard. At first glance I was slightly puzzled by Apple’s decision to use the same keyboard on its 15.4in system as on its 13.3in offering, but actually it makes sense. Not only does it save Apple a bit of money, by dint of not having two different keyboard production lines, but actually, the MacBook’s keyboard is pretty damn good and making it any bigger would probably detract from, rather than benefit that. 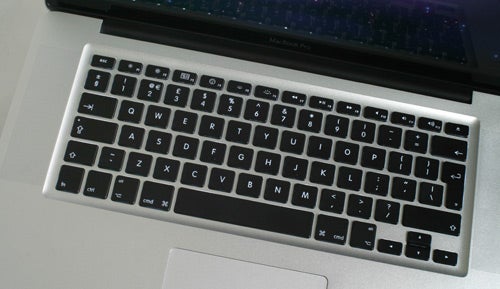 As Andy commented, these new keyboards lack that reassuring ‘click’ on every keystroke that the previous generation have and, indeed, feel that bit spongier. Being used to my current laptop, a Sony VAIO TZ, which has a much more reassuring feedback when typing, I initially found this pretty disconcerting, but after a day or two with the Pro I got used to it. Doing a quick in-office survey the general reaction was ambivalence in either direction, so it’s definitely a matter of personal preference. As ever, if you can try before you buy so much the better.


The multi-touch enabled touchpad is every bit as good here, too, as on the MacBook. Occasionally it seems a little too sensitive and when dragging the fact the pad has edges becomes painfully obvious with alarming frequency, but such niggles are soon dispelled by the sheer joy and ease of use that multi-touch brings to the party.

Aside from those previously mentioned, and the £400 price difference between the base models, there is but one other difference between the MacBook and the MacBook Pro; the latter’s dedicated nVidia GeForce 9600M graphics chip. This comes with either 256MB in the base spec Pro or 512MB of RAM in models upgraded with faster CPUs. Given the lack of (power-hungry) games worth playing on Mac OS and the relatively low resolution of the screen, getting more graphics RAM is not a compelling reason to plump for an upgrade. The MacBook Pro simply isn’t a gaming notebook.


Saying that, the GeForce 9600M does offer a tangible performance gain over the onboard, integrated 9400M. While it is easily possible to get playable framerates in games such as Spore and Call of Duty 4 on both chips, the 9600M allows higher detail settings to be applied before any slowdown is noticed.

Neither chip is going to blow anyone away, but knowing it’s possible to relax with a game or two when all that professional stuff gets too much will no doubt reassure anyone having just splashed out over £1,500 on a Pro.


Of particular note here is that by using an nVidia chipset Apple is able to boast nVidia’s Hybrid SLI technology. This allows the system to switch between either the battery-friendly integrated graphics or the more powerful chip at the click of a mouse. Currently this requires a logout, but my sources at nVidia assure me this is an operating system limitation and as such could be fixed in the future. 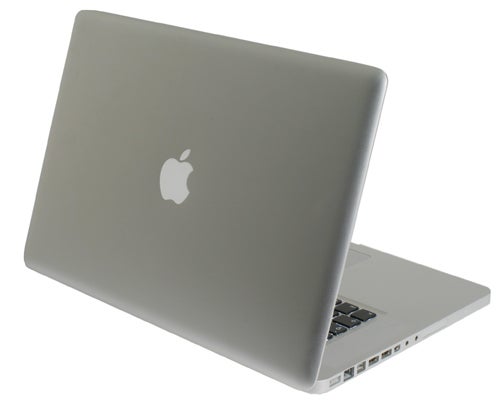 Ideally the full fat version of Hybrid SLI will ultimately be supported, enabling not only seamless switching between integrated and dedicated GPUs, but also allowing for both to run together, providing even more graphics horsepower than a single chip can muster.


Sure the already poor battery life of the MacBook Pro would take a hit in performance mode, but you’re unlikely to be using it too much when away from mains power. Our 2.53GHz model with 4GB of DDR3 managed a reasonable four hours of general use with the backlight set to 70 per cent, which I considered perfectly readable, and Wi-Fi enabled, using the 9600M and a pretty respectable four and a half hours with the integrated 9400M. More sparing use might get that up towards the claimed five hours, but that’s hardly important in what is, after all, a machine that’s not intended to be truly portable.

Unlike the 13.3in MacBook, which only saw the arrival of an LED-backlit display this generation, Apple’s MacBook Pro range has benefited from such an upgrade since June 2007. Sadly our 15.4in example wasn’t that great. While colour accuracy, vibrancy and black levels left little to be desired, such efforts were let down by uneven backlighting, with a couple of very distinct ‘pools’ of light visible in the lower centre of the display.


These became especially pronounced off-plane, although in fairness that’s not a major problem for a laptop screen which will generally be used by one person the majority of the time. What is a fair criticism, though, is the disappointing resolution offered by Apple. That 1,680 x 1,050 isn’t the default offering on a 15.4in system likely to be bought by users doing a lot of graphics work seems mad. That there is no upgrade option at all seems near-unforgivable to my mind. Thank goodness the 17in Pro will almost certainly offer a 1,920 x 1,200 panel option. 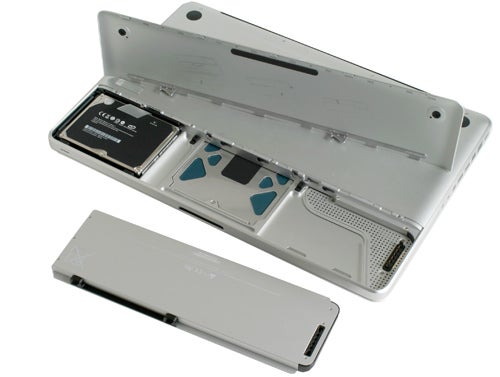 As ever Apple’s pricing for the spec given includes what I like to call a “better OS tax” but others might label a “style over substance subsidy.” And don’t even look at the upgrade list. Apple seems to think that it’s okay to charge full price for the new part when upgrading over and above the base spec, but while keeping the old part for itself. If you think you’ll need more memory in your Apple notebook, buy it separately – it will be cheaper than an upgrade, and you can sell the old module as well.


Still, for the (s)mugs(/s) interested, upgrade options include moving from a 2.4GHz CPU to a 2.53GHz or 2.8GHz option, upping the hard drive from 250GB to 320GB or (for the reckless) an SSD and bolstering the default 2GB of DDR3 RAM to 4GB. The only upgrade worth letting Apple charge for is the CPU, as the other improvements can be done easily by the end user at a much reduced cost. 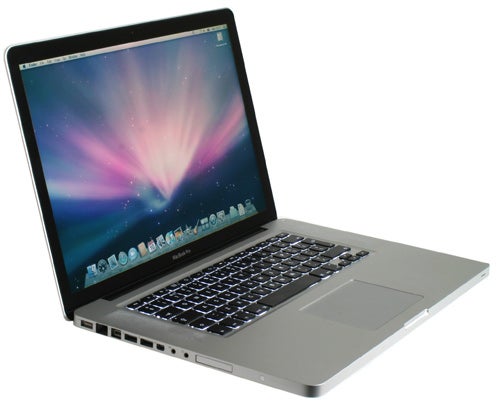 Ultimately the 15.4in MacBook Pro’s biggest issue is the MacBook. Aside from the addition of a dedicated GPU and, obviously, a bigger chassis and screen, I can’t think of anything offered by the Pro which, if I were spending my own money, would persuade me to pick it over the cheaper smaller alternative. Surely the difference would be much better spent on a decent external monitor, if resolution is a particular issue, or component upgrades.


Considered by itself the late-2008 MacBook Pro is simply a disappointing, but just about acceptable upgrade from its predecessor. However, when taking the newly-updated MacBook into account, it becomes hard to recommend the larger, significantly more expensive system over its smaller sibling. Apple has in effect beaten itself out of its own market. 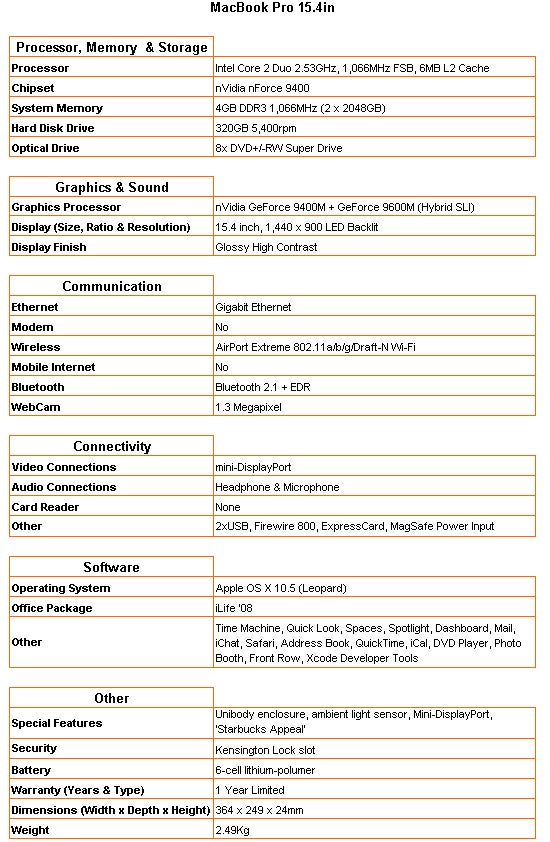