Ever since Apple unleashed the stunning aluminium unibody MacBooks in 2008, its original MacBook looked a forlorn, awkward proposition – an impression confirmed when we reviewed it back in July. Thankfully Apple finally rectified the situation in releasing the now unibodied, polycarbonate MacBook. We’re not given to agreeing with marketing spiel too often, but Apple’s description of it being ‘completely redesigned’ and ‘better-in-every-way’ rings true. Still, at just £100 less than the identically proportioned MacBook Pro 13in, is this enough? 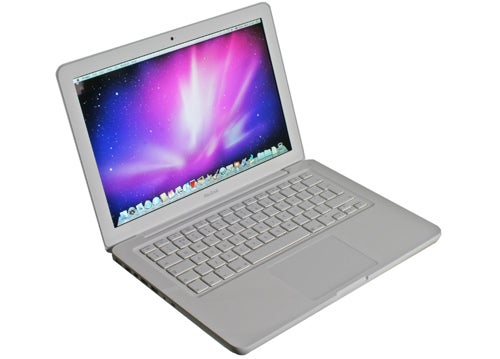 Save for the price difference and the materials used, the MacBook is the spitting image of its 13in MacBook Pro counterpart. In actuality the MacBook is slightly wider, deeper and thicker than the Pro, but we’re talking a matter of millimetres here. Likewise, at 2.13kg, the MacBook is a shade heavier, but it remains very portable nonetheless. Vitally, while the plastic chassis doesn’t feel as luxurious as aluminium, none of the minimalist style is lost in translation and it’s a massive improvement on the old model.


Another key factor for potential buyers is the display, which is now the same LED backlit, 13.3in effort as found in the Pro line. Not only does this have the potential to improve battery life, it also means a brighter, more colourful image. Indeed this new display is one of the best things about the MacBook. Its outstanding viewing angles would put most laptops to shame, while the vibrant colours and inky blacks give videos and photos plenty of punch. No similarly priced Windows laptop can boast a screen half as good as this. 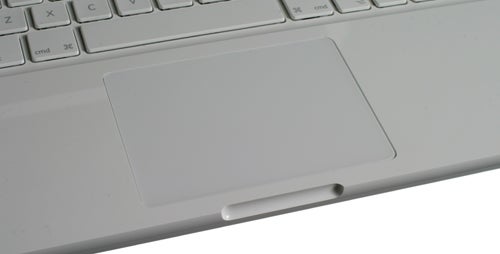 Other features that have made the trip across the divide include the outstanding glass multi-touch touchpad. HP’s Envy 15 showed imitating this clickable pad isn’t easy, only reinforcing exactly how good Apple’s effort really is. Be it manipulating photos, scrolling web pages or simply navigating the OS, its smooth finish and massive surface area make it joy to use. At the risk of sounding repetitive, no similarly priced Windows laptop can boast anything half as good as this.


As ever with Apple you pay the price for these luxurious features in other departments. That said, the base spec of the MacBook (there’s only one) is pretty decent. An Intel Core 2 Duo clocked at 2.26GHz and 2GB DDR3 RAM matches that of the entry-level MacBook Pro, as does the presence of nVidia’s 9400M integrated graphics. Wireless-N Wi-Fi, Bluetooth and Gigabit Ethernet are all standard, too, while you actually get a larger 250GB hard drive versus the 160GB one on the Pro. 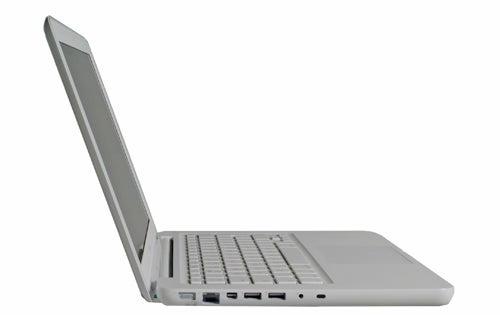 That’s a nice upgrade, but predictably it’s there to compensate for the features you miss. Most notably this includes the backlit keyboard, but also FireWire and, worst of all, the SD card reader. We’ll quite happily live without a backlit keyboard and FireWire (the latter of which has long been a niche connection outside Macs anyway), but in a world where digital camera ownership is more or less universal, the absence of an SD card reader is very hard to forgive.

As the MacBook makes more headlines for the connections it lacks, it’s no surprise those it has are fairly unremarkable. A meagre two USB ports are joined by a Gigabit Ethernet port, a single audio jack combining both input and output duties and the now Apple standard mini-DisplayPort output. There’s the always excellent Mag-Safe power connection as well, of course, but on the whole the MacBook is severely limited here.

It’s a shame given that it excels in so many other areas. We’ve already touched upon the design, which is excellent, but it’s enhanced by the rather nice soft-touch underside that makes it particularly comfortable on your lap. That the MacBook, like its brethren, remains incredibly cool and quiet only enhances its credentials as a proper laptop, as opposed to one that will roast you alive.


This is matched by excellent performance. Boot and shutdown times, always a strength in Macs, are lightning quick and general performance is equally strong. Unfortunately, due to some software issues, we weren’t able to run our previous set of benchmark tests, but given the spec the MacBook should perform similarly the MacBook Pro we reviewed last year – we hope to introduce some new Mac benchmarks in the future.

It’s a similar story in battery life, since the new MacBook utilises the same non-user removable Lithium-Polymer battery that the 2009 MacBook Pro introduced. This has one obvious downside (if you’re struggling, it’s that it’s not user removable!), but it does deliver excellent longevity – Apple quotes ‘up to seven hours’ and we managed a decent five and half hours with Wi-Fi enabled and screen brightness at 60 per cent.


Depending on your preference, the MacBook has a slightly superior keyboard, too. While the Pro has a lighter, shallower feel to it, the MacBook’s keyboard sports a chunkier, deeper action that offers a shade more feedback, albeit with more pressure required for each strike. 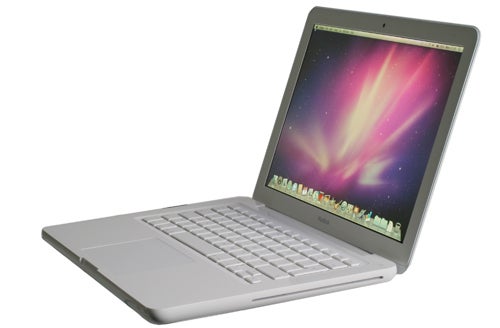 All of which makes the MacBook a product we’d almost recommend outright. It’s only held back by Apple’s obvious preference that people should opt for the MacBook Pro. For just a £100 more at current pricing, it offers so much extra (aluminium chassis, backlit keyboard, FireWire, SD card reader), making the MacBook look somewhat stingy by comparison. We’d probably feel differently were it not for the omission of an SD card reader, but Apple knows this just as well as us, which is why it’s not there.


If you really can’t afford the 13in MacBook Pro, the rehabilitated MacBook is an excellent alternative. Given the choice, however, we’d still recommend the Pro since its benefits outweigh the meagre price difference.