With Apple’s unibody MacBook Pro stealing the limelight it’s sometimes easy to forget that the white MacBook, which first went on sale way back in 2006, is still around. It’s a testament to the strength of the original design that Apple still sees it as a viable option and while the unibody machines feel very different, they still share more than a little DNA with this one. Indeed, this DNA goes both ways since the MacBook now comes with nVidia’s 9400M chipset – a marked improvement over Intel’s integrated graphics offering – which first appeared in the unibody range.


Fundamentally the white MacBook still exists because Apple feels it needs an entry-level system, though not one priced so cheaply that people flock to it and not the new MacBook Pro – that would be very silly! Apple’s official £749 asking price is £150 less than the MacBook Pro, but with the latter severely discounted at the moment and former less so, the difference is closer to £100. This puts the MacBook at a slight disadvantage when there are so many keenly priced Windows based alternatives out there, like the Samsung Q320 and HP Pavilion dv3, that on paper offer a lot more. 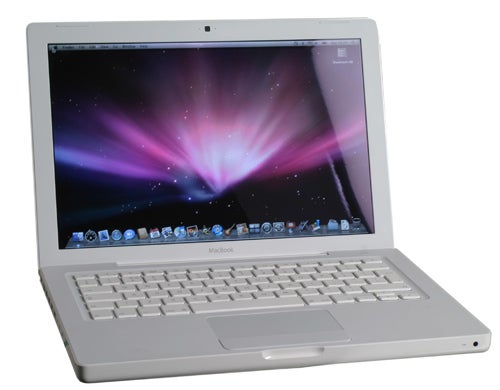 This is especially true given the MacBook also lacks many of the features that make the MacBook Pro so enticing. These include the backlit keyboard, multi-touch touchpad, LED backlit display and the SD card reader, but also some of the smaller touches like the light sensor for controlling display brightness. The MacBook Pro can therefore fall back on these features, as well as its sumptuous design and usability, to argue a case for offering extra value. The MacBook has no such solace. 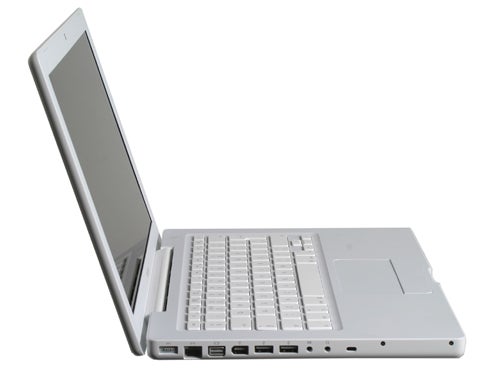 However, one advantage it can lay claim to is a replaceable battery, which might be of some benefit for those Apple devotees that haven’t already abandoned ship in consternation. This system also comes with a reasonable basic spec. Its processor, for instance, is the Intel Core 2 Duo P7450, which shares the same 1,066MHz front-side bus and 3MB L2 cache of the MacBook Pro processor and is clocked only slightly lower at 2.13GHz.


This is actually faster than last year’s unibody MacBook, which used a 2.0GHz variant. Unfortunately Apple spoils things (probably intentionally) by using slower DDR2 RAM instead of DDR3 RAM, though you do get just as much: 2GB. There’s no change to the hard drive either, with a 160GB, 5,400rpm unit doing the duties. 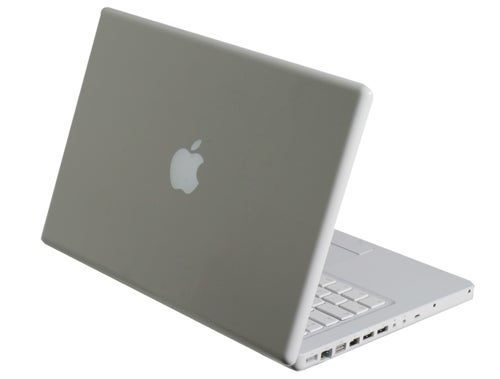 Other standard features include Draft-N Wi-Fi and Bluetooth 2.1, as a well as Gigabit Ethernet. You also get Apple’s iLife 09 multimedia suite, as has been the case with MacBooks for a long time now, which combined with OS X makes for a thorough and great to use software suite. With this MacBook lacking many of the hardware intricacies of the MacBook Pro, its strength in software suddenly becomes a lot more important.

Stepping back from the ins and outs of the feature-set for a moment, one thing that’s easily overlooked is the chassis itself. Even though it’s getting on in years, it does still retain a look and feel that is entirely Apple. However, whereas its all-white finish was a novelty in the early days, it doesn’t have quite the same impact now. It’s just not that exciting anymore.

It’s still a very tidy looking system, though, particularly thanks to its seamless integration of ports and smooth underbelly. These are the facets that really set Apple laptops apart from the rest of the flock, though the likes of HP, Samsung and Dell have closed the gap a fair amount these days.


They also come out on top where build quality is concerned, which has always been a weakness for the MacBook. Apple has addressed many of its problems over the years, but there’s still that pervading feeling that it won’t take kindly to a little rough and tumble. This is particularly evident in the display, whose hinge still feels rather flimsy, while the back is poorly protected from any external pressure – distorting quite badly when flexed.

It’s a fact Apple more or less admitted when releasing the unibody MacBooks, which were designed to eliminate many of the issues created by the composite manufacturing process of the MacBook. Their aluminium chassis also seem much better suited to dissipating heat. For instance, the 13in MacBook Pro rarely spins its fans or gets discernibly hot, even when playing a DVD, whereas the MacBook spins up its fan and gets noticeably warm. It’s not a whole lot worse than most Windows-based laptops of the same size, but it’s definitely less efficient than the MacBook Pro.


It also has less flexible connectivity. There’s no SD card reader, which we regard as a pretty essential addition to the new system, while the FireWire port is only a 400Mbps one, not the 800Mbps of the MacBook Pro. A mini-DVI port is another legacy port, though arguably those with existing adapters will welcome the saving of not buying new mini-DisplayPort adapters. Things are rounded-off by two USB ports, line-in and line-out audio jacks and an Ethernet port. 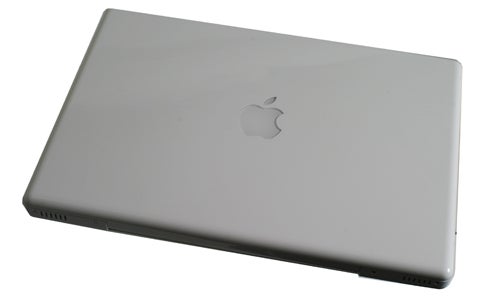 Another area where the MacBook suffers in comparison to the MacBook Pro is with its audio, which is far tinnier and lacking in volume. Again, it’s no worse than many competing laptops, particularly the Samsung Q320, but the HP Pavilion dv3 has both machines soundly beaten here and there’s no denying it offers the more complete multimedia experience.

Unlike the new MacBook Pro, or the Q320 and dv3 for that matter, the white MacBook doesn’t use an LED backlit display, so relies on traditional and increasingly rare CCFL backlighting. This adds weight and thickness to the machine, with the overall weight reaching a fairly hefty 2.2kg.

On the whole it’s a reasonable display, but it’s not without its issues. Like the MacBook Pro, there’s noticeable banding in gradients, though here it’s slightly more severe. Its colour production is also more neutral, which for many may be preferable to the slightly over-saturated look of the Pro. But most important of all it’s not as bright as its LED backlit counterparts, which means it doesn’t cope as well in bright lighting – a fact not helped by the reflective display.


One area where the white MacBook has a slight edge, however, is in its keyboard. While it may not be backlit, its keys have a firmer and more traditional action to them compared to the softer ones of the MacBook Pro. It’s a key action many Apple users seem to prefer and though the MacBook Pro keyboard remains very good, it’s easy to see why people miss this keyboard.

However, if you’ve used the multi-touch touchpad on the new MacBooks, going back to the old one will be a challenge. It’s still a perfectly decent effort and we much prefer its two-finger scrolling to the scroll zones of most Windows laptops, but there’s no denying that the lack of a second button is just plain irritating.


While the MacBook does have a few weaknesses where design and features are concerned, it’s still a very capable performer. As noted earlier, its CPU is actually faster than the one in last year’s unibody MacBook and though in X-Bench it is edged out by the latter, this is largely due to the slower DDR2 RAM. Where CPU intensive tasks are concerned, it’s definitely the faster machine. It should also be quicker than the likes of the Samsung Q320 or the HP Pavilion dv3, both of which use slower 2.0GHz CPUs with only an 800MHz front-side bus and less L2 Cache. Combined with the native efficiency of Apple’s operating system and you’ve got a very perky performer.

This extends to pretty good battery life, too. In the DVD Playback test, which is identical to that used for Windows machines, it lasted two hours and 44 minutes – longer than the Samsung Q320 and only slightly less than the HP Pavilion dv3-2055ea. Unfortunately this is the only like-for-like test we have, so for other metrics we must rely on subjective testing. Here the MacBook also performs pretty well; we got 4 hours and 28 minutes out of the machine while using the system for a combination of word processing, web browsing and video viewing. Unlike the MacBook Pro, of course, the battery capacity will degrade at a normal rate but then it’s removable, so a new battery is never far away.


Overall, though, the MacBook remains an odd beast. If you absolutely must have a Mac and can’t stretch to a MacBook Pro, this is still a perfectly serviceable and competent option. However, if you’re really that skint, buying a refurb or second-hand aluminium version (Pro or otherwise) is worth considering given the improved experience it offers. And, if you’re not that fussed, there are any number of Windows alternatives that offer more features, a more rounded package and a cheaper price. 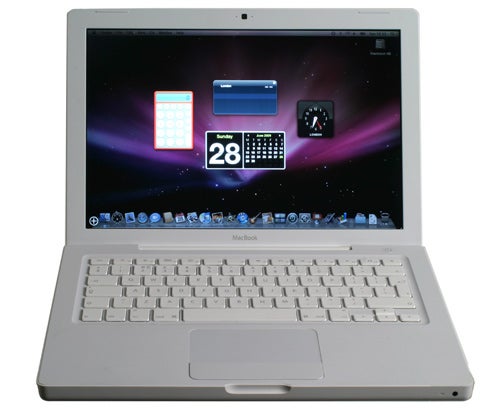 
Aside from a rather stingy hard drive, this is a decent laptop. However, it’s hamstrung by its need to not be ‘too cheap’ and a chassis that’s known to be less than sturdy. If it was retailing around the £650 to £700 mark it would be a very serious contender, but as things stand there are lots of avenues we’d investigate before opting for the MacBook.

In X-bench the MacBook performs very well. In most tests it outperforms last year’s unibody MacBook. Only its slower memory lets it down, but it’s still a very good all-rounder performer.

While battery isn’t quite as impressive as on the new MacBook Pro, it’s still pretty decent. In normal use you can expect around four and half hours or more.