An update to Apple’s Mac mini has been long-rumoured and much-awaited. While the previous generation system didn’t, and I would argue still doesn’t, have a rival in design stakes, the technology within its ever-so-stylish chassis was getting just a bit long in the tooth.


The latest raft of Mac mini’s bring the system back in line with the rest of Apple’s machines upping the base-line system configuration and adding some new top-end options. Not that those changes are particularly evident on the outside; this generation of Mac mini still uses the same basic chassis design as the first systems did back in 2005.


Apple is calling this generation of Mac mini the greenest ever and that philosophy isn’t just extended to the choice of components and manufacturing materials – more on which later.

Macs have always been packaged in a minimalist fashion, but the mini takes that to the absolute limit. Sliding off the piece of cardboard that contains the bundle reveals a single, small, cardboard insert holding a manual and the software discs and covering the bundled mini-DVI to single-link DVI converter and the Mini’s power adapter. Removing these exposes the Mac mini itself, nestled neatly at the bottom of its box.


As standard Apple includes nothing else with the Mac mini, with such accessories as a keyboard, mouse or remote control all optional (paid for) extras. Though in Apple’s defence, most Mac mini buyers are expected to have all these already and would probably resent being charged for kit that isn’t needed.


Despite being the same size as its predecessor, I still can’t get over how small the Mac mini is. The system measures 165 x 165 x 51mm and weighs in at 1.31kg but the numbers don’t do justice to just how tiny the mini seems compared to equivalents, such as the Dell Studio Hybrid and, let’s face it, the mini also looks lovely.

The Mac mini’s aesthetics do detract from its usability ever so slightly. Leaving the front of the mini uncluttered by naught but the so-called SuperDrive and a power-status indicating white LED does sacrifice some practicality; would a couple of front-mounted USB ports really detract from the looks that much?


At least I can’t criticise Apple on the breadth of connectivity options boasted by the Mac mini – at the rear, out of sight of course. From left to right, as looked at head-on, the rear panel sports – deep breath – a power button, power connector, gigabit Ethernet port, FireWire 800 input, a mini-DVI port, a mini DisplayPort output and five USB 2.0 ports above which sit a Kensington lock slot and audio in and out, both optical and 3.5mm.

Of those only two give cause for complaint – mini DVI and mini DisplayPort. Okay, having two video outputs is great and, yes, a mini-to-single link DVI adaptor is included with the Mac mini but why, oh why Apple must you insist on using proprietary display outputs? I suppose, erring towards the generous, I would rather see two mini connectors, enabling the Mac mini to output to two displays, than a single output.


That doesn’t mean, however, I wouldn’t like to see an HDMI port making it possible to connect the mini to a TV without needing an adaptor. Especially as its form factor and design lend themselves to using the mini as an under-TV computer. Perhaps Apple is worried the mini might steal some Apple TV sales were it more geared for use with a television.


Internally Bluetooth – 2.1 + EDR – and Draft-N wireless expand the connectivity options and both work flawlessly, as expected. There’s also a speaker built into the Mac mini which is surprisingly good. I’m not suggesting that it’s good enough for listening to music or watching films, but for the occasional YouTube video or Flash game it’s absolutely fine.

The most notable new component in the 2009 edition Mac mini is the same nVidia 9400M IGP chipset that Apple has used in its unibody MacBook line and which also features in the new iMac range. Unsurprisingly much ado is being made about how this chip makes the new Mac mini X times faster than its predecessor, but then better than the previously Intel GMA 950 graphics chip is hardly cause for celebration.


That said, casual gaming at conservative resolutions and detail levels is certainly possible on the 9400M and the same couldn’t be said of Intel’s GMA 950. The selection of games for Mac OS is limited versus Windows, but titles such as Call of Duty 4, Spore and the ever-popular World of Warcraft shouldn’t trouble the 9400M too much. nVidia’s chip also offers GPU-decoding of HD video content, although as there’s no Blu-ray drive option that’s less useful than it could be; without using an external drive at any rate. 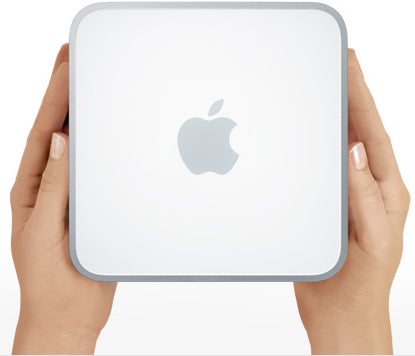 
£649 nets 2GB of RAM and a 320GB hard drive as standard. Both systems can be upgraded to a 2.26GHz CPU but the negligible performance increase brought is unlikely to be worth the £120 Apple wants for doing so. Likewise, adding 4GB of RAM is a further £80 on top of the 2GB configuration, but I doubt most Mac mini users would find it necessary.


If I were buying for myself, then, I’d plump for the £499 Mac mini, cough up £40 for 2GB of RAM and put the £110 towards an external hard drive, rather than upping the internal one, assuming that I found myself running low on disk space further down the line. Actually, come to think of it, I’d probably put the savings towards a copy of iWork ’09 or Office for Mac 2008. Probably the former as it makes a nicer match to iLife ’09 – which Apple includes with the Mac mini.

The only Windows-based system I can think of that is really worth considering as an alternative to the Mac mini is Dell’s Studio Hybrid. Not only do I think the Hybrid looks almost as good as the Mac mini, but it can also be specced nearly identically for around the same price. Moreover, the Hybrid offers a standard DVI output and HDMI connectivity!


Of course at this point the mini pulls out the “I run Mac OS” trump card and, it should be pointed out, also has a significantly more powerful graphics chip. Nonetheless, if OS X isn’t your cup of tea or you want a simple-to-setup under-the-TV computer, the Hybrid is probably the better choice. 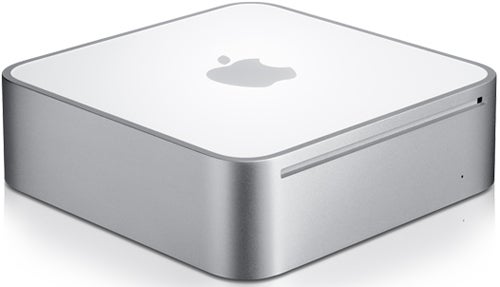 Some competition to the Mac mini also comes, oddly enough, from Apple itself. Unless you’re adamant about keeping your current monitor, keyboard, mouse and such like the iMac – especially the new £1,199 24in system – is a tempting alternative and offers an even more compact and powerful solution.


However, while configuring a system with a faster CPU, a load of RAM or a higher capacity hard drive may well push the price up, none of those upgrades are needed for the kind of day-to-day computing the Mac mini is geared towards. Simply add 2GB of RAM to the base system and the resulting £539 Mac mini will be more than happy to chew through any task the average user could possibly throw at.


For general everyday computing – web browsing, sending and reading emails, perhaps the odd bit of word processing or even kicking back and watching a DVD, the Mac mini is a more than capable machine. That it just so happens to look fantastic and have an almost infeasibly small form-factor is all the better. To see and use a Mac mini is to want one, and I can’t imagine any owner being disappointed with the purchase.