There’s a reason that people always think of Apple’s first iPod – 5GB hard drive, mechanical click wheel and all – as the first MP3 player (even though it wasn’t by a long way). The navigation wheel was such a groundbreaking and intuitive interface that no other manufacturer ever managed to best it. I guess you really can’t re-invent the wheel.


In fact, it took some six years and the launch of the multi-touch sporting iPhone and iPod touch, to see Apple’s wheel-centric navigation interface bested.


Love or loath Apple as a company, there’s absolutely no denying that the iPod touch was simply the most desirable MP3 player going when it launched. That’s not to say that other devices didn’t offer better audio quality, or pack more features – they did – but they didn’t have that “wow” factor that Apple has such a knack of adorning its products with. 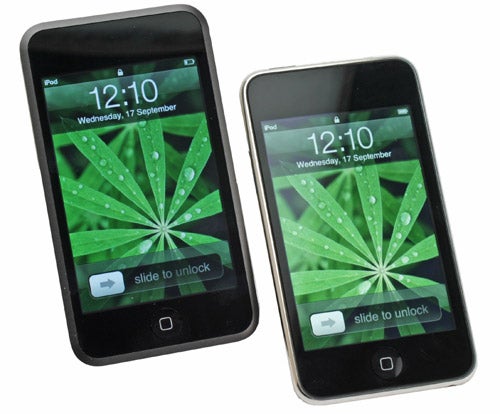 All of which leads us rather nicely to the launch of the second generation iPod touch, of which we’ve cunningly managed to acquire a 32GB version. That’s important because at this capacity I feel pretty confident saying most users will be able to squeeze in their entire music collection. It certainly makes my 4GB original iPhone seem just a little impotent.


On the surface you’d be hard pushed to tell what’s new about the 2nd generation iPod touch. It still has the same super-shiny aluminium back which still seems to hunt down scratches – I know denim is tough, but honestly, I’d have thought metal could take on cotton in a fight and win – and it still sports a 3.5in, 480 x 320 pixel multi-touch display, now the yellow-ish one sported by the iPhone 3G. It also has a slightly more rounded design, which is just about noticeable in the hand.

Look a little closer, though, and there’s one addition to the left edge of the device which is actually pretty baffling: volume controls. Their addition isn’t what’s surprising, but rather quite how Apple thought leaving them off the original touch was a good idea is what has me puzzled. I don’t know anyone who wants to have to take their music player out of their pocket just to turn up the volume!


The other (arguably) major new hardware additions are a speaker – which is good enough for watching the odd vodcast or TV show in bed but not much else – and Nike+iPod support for athletic types. I’d argue the latter isn’t that important in a device this size but if you really want to take something this large jogging with you, so be it.

Sticking to the trend of incremental, rather than revolutionary improvements, the new touch slightly bests its predecessor’s 22 hours music and five hours video playback by offering 36 hours of audio and six of video. Format support remains unchanged and as poor as ever compared to more than a few rivals. On the audio side up to 320kbps MP3, 320kbps AAC (including, obviously, iTunes DRMed tracks), Apple lossless, Audible (formats 2,3 and 4), AIFF and WAV files are catered for. Meanwhile video support is limited to either 1.5Mbps, 640 x 480, 30fps H.264 or 2.5Mbps, 640 x 480, 30fps MPEG-4.


Other players may have better format support – FLAC, Ogg and WMA for example – but frankly you don’t buy an iPod for its audio quality. It’s the interface and design that sets Apple’s players apart from the crowd. You only have to wander around any reasonably sized town for half and hour to be reminded that, contrary to all good advice, most users are content to use the ghastly bundled earphones with their iPods. They probably all rip (or acquire…) their music at 128kbps so it takes up less space, too. That’s just plain wrong if you ask me – Apple Lossless or nothing, thanks. 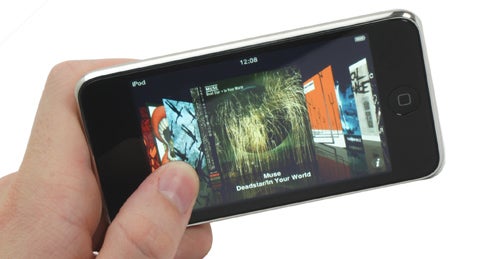 Rant aside (but seriously, if you buy any music player get a decent set of earphones as well, okay?) there’s little to dislike about the iPod touch’s audio performance in general. Firing up Anberlin’s Cities highlighted the traditional iPod pitfalls of a slight lack in punch and clarity.The synth-heavy There is no Mathematics to Love and Loss, for example, while more than listenable, could definitely do with a touch (ho ho) more presence. The less complex Reclusion faired better, with the touch delivering a decently balanced sound and the synth effects nicely punctuating the electric guitar parts without overwhelming them.


Winding back a few years to The Smashing Pumpkins’ Cherub Rock and the situation didn’t differ much, the touch again making a decent show of itself. My biggest gripe is that vocals occasionally had a tendency of getting lost in the mix a little. Whether the touch or The Pumpkins are to blame for that, though, is a matter of debate. Incidentally, swapping from my Shure SE 420s to the bundled earbuds was a truly painful experience – who’d’ve thought it? 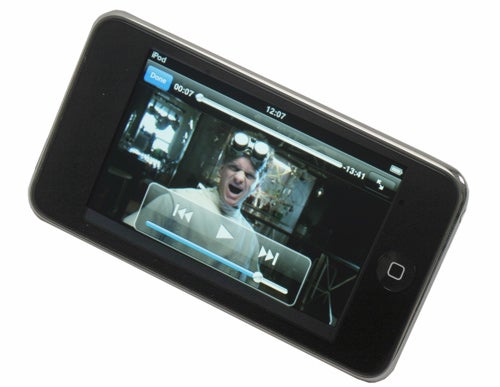 One good thing I can report is that the strange hiss Jon noticed with his 16GB first generation touch definitely wasn’t present with my second gen model – either he had a dud or Apple has fixed whatever problem was previously present. If fidelity is your primary concern then the Trekstor Vibez (although good luck finding anywhere selling one) should be your first port of call, although a player from Sony, iRiver or Creative will also likely best anything from Apple when it comes to pure audio quality.


Video wise, a play through the three-part Dr. Horrible’s Sing-Along Blog – Firefly’s Joss Whedon’s side-project during the writers’ strike – while sitting in bed confirmed what we’ve said before. The iPod touch’s screen really is as small as I’d want to use on a semi-regular basis. That said, the screen is as vibrant, bright and colourful as anyone has any right to ask from such a relatively small device. I wouldn’t want to use it to watch a film, but for TV shows (House, for example) it’s pretty damn watchable.


So far, so good then, and I haven’t even mentioned the most important feature of the touch…

Multi-touch is, without a doubt and entirely obviously, the biggest reason why anyone would consider the iPod touch. The best thing about multi-touch is how intuitive it is – even my grandparents can cope with the concept of pressing the icon labelled with the function they’re trying to get to. Want to move a list of emails to the top of the screen? Just drag them up. Want to navigate through your music as if you had the CDs in front of you? Just turn your iPod on its side and use Cover Flow to scroll through your collection by album art. Actually, I still think Cover Flow is more use as an “ooh, look at me” facility than anything else, but I know Ed is a fan – horses for courses I guess. It definitely garners a few glances on the train, that’s for sure.


Mobile Safari is as (s)good(/s) bloody fantastic as ever it was and is still by far an away the best mobile web browser going by a country mile. Sure, it still doesn’t support Flash but the BBC iPlayer and Youtube are both watchable and that’s more than most rival devices can offer. 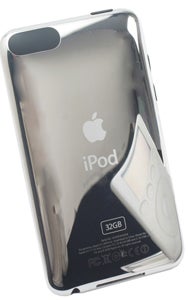 The on-screen keyboard, too, hasn’t lost its brilliance in the last year or so. Whether typing notes or URLs, adding calendar entries or composing emails It never ceases to amaze me how good both the touch screen’s ability to ‘know’ which letter you were jabbing for or what word you were trying to type.


Apple is making a pretty big deal of the iPod touch as a gaming device this time around, too – thanks to the arrival of the Wi-Fi accessible App store. I would pay good money for a few minutes in a locked room with whoever thought calling it “the funnest iPod ever” was a good idea but I at least agree with the sentiment, if not the grammar. Aside from annoyingly requiring an iTunes Store account to download, there’s nothing wrong with the plethora of free games available for the iPod touch. Dactyl is my current favourite and if anybody can best a score of 53 I don’t want to know about it.


Games aren’t the only thing on the App Store either. A slew of paid-for and free applications are available for download and the list is growing all the time. Add to that the ability to buy and download music away from a PC via the wireless iTunes Store and you’ll have to concede that Apple has almost every Wi-Fi base covered – add syncing over Wi-Fi and I’ll be content.

Wired-up, the biggest catch of an iPod – that you have to use iTunes – is made bigger with the latest generation of devices, which will now require iTunes 8. The addition of Genius playlists might be recompense enough for that inconvenience for some, but I can’t think of any other reason for the restriction so it’s a tad frustrating. Would I refuse to buy a touch because of that, though? No, simply put the touch is by far the most desirable MP3 player going.


The iPod touch isn’t really even that expensive considering what you’re getting. The £289 asking price of the 32GB model may sound expensive, but there’s no other device that can compete with the touch’s feature set save the iPhone. And you’ll be paying £400 for a 16GB PAYG iPhone 3G. Heck, I remember paying some £300 for a 20GB third gen iPod back when I was just starting college (2003, for the curious). My point? Value is a relative thing and as a fashion accessories go the touch is impressively practical and arguably pretty cheap.


The £169 8GB touch makes for an especially interesting trade off of coolness against capacity with the 120GB, £179, Classic. I already have an iPhone so I know which I’d pick, but without that deciding factor I’d definitely be thinking it over for a while.


For many £169, £219, £289 for an 8GB, 16GB or 32GB MP3 player will be an unjustifiable expense. That’s rather missing the point of the iPod touch, though. There was precious little wrong with the first version and there’s even less to dislike the second time around.


Living on the bleeding edge is never going to be a value proposition and the touch is still streets ahead of the competition, at least from a technology perspective. Not only that but it’s still eminently stylish and the 32GB offering, while expensive, is pretty practical, too. If you don’t want one you probably don’t want a portable player at all.