Okay. Hands up. We know we’re a bit late on this one, but we’ve only just been able to get hold of the, ahem, brand new (ish) iPod shuffle. We’re at least 99 per cent sure that the delay is a case of limited product samples and nothing to do with our slightly negative initial impressions.


All we can say is that we’ve definitely come to the shuffle with a completely open mind. After all, we rather liked the last one, and while it has been outclassed by a number of rival devices in terms of sound quality, usability and value, it’s still one of the finest micro MP3 players on the market. 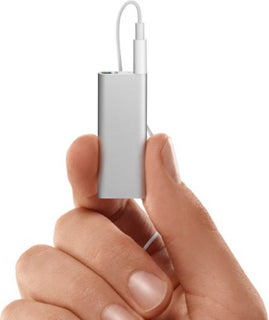 In some key respects, the 3G shuffle makes an even better first impression. I’ve seen an awful lot of players in the last few months, but the Apple’s latest has serious ‘wow’ factor, and it’s all down to a killer combination of size and style. I knew the shuffle was small, but I didn’t expect it to be this tiny. Take it from me, reading that it’s around 4.5cm long, 1.7cm wide and 5mm thick is one thing, but seeing this thing in the metal is something else.


It’s hard to imagine how Apple packed the processing and output circuitry in there, let alone the flash memory and a Lithium Polymer battery. With nothing on the smooth, aluminium body bar a spring clip and a three-way slider switch it’s also probably the most minimalist electronic device of any type I’ve ever encountered and one that looks – in my opinion – ridiculously cool.


The ‘gun metal’ version I have here resembles nothing so much as 2001’s monolith shrunk to ant size. Maybe that’s appropriate, because it feels like a rock-solid, indestructible, inscrutable piece of alien tech.

Of course, there’s a price to pay for all that studied minimalism; there’s no room for a screen, or indeed any playback controls on the shuffle itself. The three way slider mounted on the top next to the headphone output (which still doubles as the USB connector) simply switches between off and Shuffle and Play in Order modes, and the only other feature on the unit is a small LED indicator for battery status.


Controls are, instead, mounted on the earphones, on the cable below the right earpiece. As with the remote built into Apple’s In Ear Headphones, we effectively get three buttons; volume up, volume down, and a multi-function effort. Here’s where the shuffle gets slightly clever. Click this button once and it pauses or plays. Double-click it and it goes forward one track. Triple-click it, and you skip one track backwards. 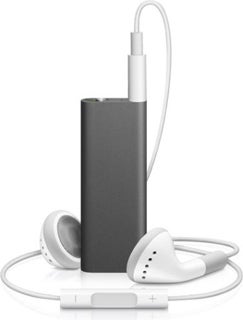 All well and good, but that’s not really a lot of control, is it? Well, Apple has come up with a smarter alternative to the screen this time: speech. Click and hold the button and a robotic voice (male or female synced with a Mac or PC respectively) announces the name of the current track and artist. Better still, this is the first shuffle to support playlists. Click and hold the button longer and you get the name of the current playlist, before the shuffle starts cycling through any playlists you’ve transferred to the device. Hear the one you want? Click again and you’re away. It’s simple, but it works, and it’s a more sophisticated AUI (Audio User Interface) than that on the Sony W202 walkman, with its bizarre “zappin’ in” exclamations.


I understand that MacOS users get a more human voice, but the one Windows users get is perfectly usable. In fact, bar the odd bit of peculiar pronunciation, the only weird foible I found was that, when announcing classical pieces by Wagner, the shuffle would suddenly switch to a strange, Germanic male accent. Still, I guess you might call it appropriate.

In short, while the disadvantage of no screen hasn’t been entirely cancelled out, it’s a lot easier to live with on the new shuffle than it was with the old. That said things still aren’t entirely peach in shuffle land. As Gordon pointed out in his original news story, the implementation of the controls on the earphones themselves rather than an adaptor cable is a real problem, for the simple reason that it restricts what headphones you can use with the device. Prefer Shure, Sennheiser or Klipsch IEMs to the standard Apple models? Sorry. You’re out of luck.


To be fair, third-party ‘phones are expected from Klipsch and Scosche in the near future, and the latter manufacturer has also announced a stand-alone remote-control/adaptor. For now, though, you’re stuck with a choice of the bundled buds or Apple’s In-Ear Headphones. 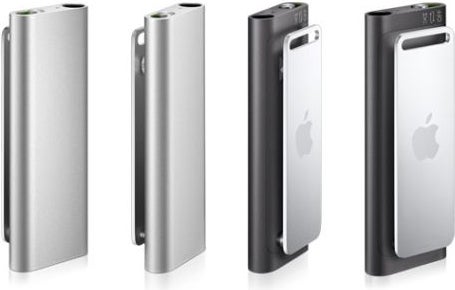 Let’s be clear: the sound through the bundled buds is no worse than the sound you’ll get through most MP3 players with the bundled earphones. In fact, I’ve heard an awful lot worse in the last few months from Far Eastern competitors. The sound lacks warmth and bass and errs towards the over-bright/tinny side of the audio spectrum, but your ears will not fall off through listening and your music won’t sound utterly ghastly. The worst I can say is that the things will not stay in your ears when exercising, and for a shuffle that’s quite a big deal.


Plug in the In Ear Headphones and it becomes obvious that the new Shuffle is – like the last Shuffle – a thoroughly decent little player. The output is clear at the top end, beefy at the bottom end, and strong in-between. Listening to the spectacularly hit-and-miss Timbaland/Chris Cornell collaboration, Scream, I hear a strong grasp of dynamics, punchy beats and bass notes and enough definition to do justice to the maestro’s trademark, razor-sharp production.

I’ve heard Massive Attack’s Safe from Harm sound warmer and more powerful at the bottom end, but again that crisp sound helps bring it to life. The Shuffle feels at home with quieter acoustic tracks like Prayers from Scott Matthews’ excellent debut album, Passing Stranger, though the slightly thin mid-range doesn’t suit Mastodon’s epically heavy Divinations quite so well. The frustrating thing is that I think it could do great things with another set of headphones, but at the moment there’s no way of telling. You can plug in another set, but with no easy way of altering something as fundamental as the volume, using them is impractical.


I suspect there’s also one other trade-off for the small size: battery capacity. Ten hours is adequate, but 50 per cent less than you’d get from the Sansa Clip, Sony’s NWZ-B133 or Samsung’s YP-U4, and about half of what you’d get from the Creative Zen Stone. 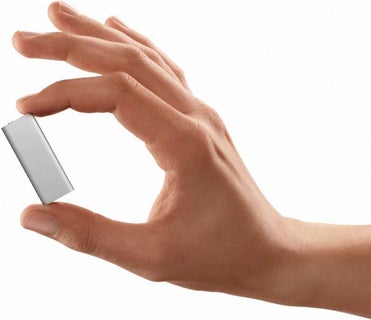 Above all else, there’s no doubt that you’re paying – literally – a high price for the new shuffle’s stripped-back styling. £60 for 4GB is no longer great value in a market where less than £50 will buy you an 8GB Sansa Clip, while a 4GB Samsung YP-U4 can be had for less than £45. Factor in the fact that, should you buy a Clip or U4, a pair of decent budget headphones could be had for £30 to £40, while Apple’s In Ear Headphones will cost you an additional £50, and things look even worse.


Despite all this, it’s almost impossible not to throw some love the Shuffle’s way. It’s gorgeous to look at, easy to take everywhere, reasonable to listen to with the more expensive ‘phones, and – bar one detail – the most usable Shuffle yet. It’s just a shame that that this one detail – the fact that you can’t use it with most third-party ‘phones – has so much negative impact on its value. If you want a stylish micro MP3 player and you can live with the bundled buds, buy away. Otherwise, the previous generation shuffle is still very attractive and widely available. If sound and value for money matter more, however, then the good old Clip just makes more sense.


Tiny size, good sound and sumptuous style come at a high cost, both in terms of value and in terms of having to live with some restrictions. If the shuffle’s caché isn’t all-important, there are better choices out there.