The basic format and design of Apple’s revolutionary iPod has remained unchanged over the years and despite many pretenders to the throne, its popularity has never waned. It’s a design classic and Apple has wisely declined to mess with it.


With the rest of the iPod range, Steve Jobs and co have had slightly less overwhelming success. The first Nano was gorgeous, but beset by problems with its screen. And the first generation Shuffle was innovative, but dowdy in comparison to a lot of the competition – hardly the stuff of techno-lust, and in the time since it first appeared on the scene it’s become even less so.


In fact, that stick design has gone from almost-desirable to dated. Which is why, instead of the softly, softly approach it has taken with its flagship product over the years, Apple decided to give the Shuffle a complete overhaul.

And boy has it done a good job. This second generation Shuffle is more Grand Designs than Changing Rooms and meets every expectation you’d have of a new Apple product. Instead of the polished white plastic that adorns almost every other iPod-related product, Apple has plumped for the clean, colourful lines of an anodised aluminium finish – available in a rainbow of different colours, naturally. I was sent one in a rather natty green and this finish wraps sleekly around the body of the player with flashes of that classic white plastic along the top and bottom edges.


On the subject of radical design decisions, Apple has also chosen to eschew the tried and tested round-the-neck method of toting tiny MP3 players such as this. Instead, it has built a sprung clip – constructed from the same beautifully finished anodised aluminium – onto the rear of the player. 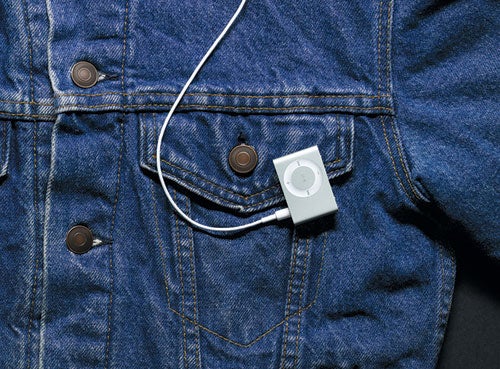 It sounds a touch gimmicky, but I’d say this is a bit of a eureka moment in portable MP3 player terms. It lets you attach the Shuffle pretty much anywhere about your person – on your shirt front, jeans pocket, bag strap, tie – and it’s so light at 15.6g you’ll forget it’s there. For exercise fanatics who like a soundtrack to go with their exercise routine it’s a dream.


The new Shuffle is absolutely tiny, too, much smaller than the previous model. It measures 41 x 27 x 10mm, or just a touch smaller than the screen on my Sony Ericsson K800i. That’s enough room for the familiar circular Shuffle control – play/pause button in the middle, with volume and skip track controls around the outside – on the front fascia and not much more.

The edges of the Shuffle are also very minimalist. One edge sports a small on/off switch, a single status LED and a switch for changing between random shuffle and looping through tracks in the order they appear on the player. On the other edge all you get is the 3.5mm headphone jack.


You’ll notice I haven’t mentioned the iPod connector here. That’s because there isn’t one. In fact in this Shuffle all syncing is carried out through the supplied docking cradle that marries elegantly with the headphone socket. A neat design, but don’t forget the cradle before setting off on your extended travels. The battery life, incidentally, is claimed to be around 12 hours, and I can see no reason to doubt that. 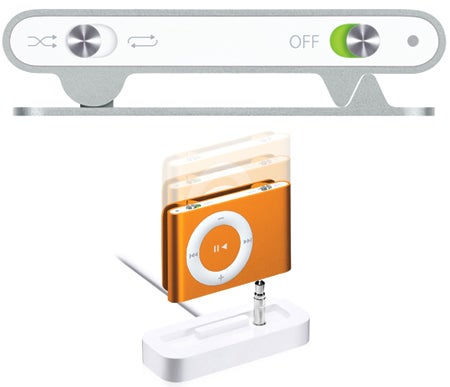 There other smart touches as well. Though there is no dedicated hold switch, the player pauses automatically when you pull the headphones out of the socket, saving valuable battery life. And the teeny docking cradle has a heavily rubberised base making what would otherwise be light and flyweight stay put on your desk surprisingly securely.


All good foundations, but what about the substance? How does this little beauty work and sound? Well, with no screen and identical controls it’s no surprise to discover that the premise behind the new shuffle is the same as with the original. It’s designed to be as simple as possible. Plug it into your computer and iTunes fires up; click a button and iTunes uploads a random selection of songs for you. You can tweak it to be biased towards highly rated songs, or manually select the tracks to upload although this kind of defeats the object. 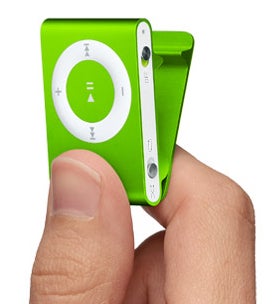 Whether you like this approach depends largely on the sort of person you are. It’s ideal if you don’t want to faff about uploading albums and tracks by hand, and I must admit it’s nice to just plug and go occasionally. But it isn’t great if you’re the sort of person who likes concept albums or a lot of classical (like me), where listening to albums from start to finish is important.


Either way, there’s no denying that it works well and is probably the easiest digital audio player on the market to use. It would be perfect for introducing Granny into the world of digital music – if that’s what you wanted it for.

Assuming the Shuffle approach is for you, the listening experience is a surprisingly pleasing one, especially in a player this cheap. Even the included earbuds aren’t bad – they’re comfortable and do a reasonable job of reproducing the music. But they do lack body, bite, dynamics and most obviously, depth of bass.

If you haven’t already, do yourself a favour and spend £30 or so on an upgrade, because with a decent pair of headphones attached, this little player really sings. With a pair of Shure’s E2C ear canal phones plugged into my lugs I was treated to a well-balanced and coherent performance. The top end was zingy and detailed, the mid-range was focussed and there was plenty of well-shaped bass. 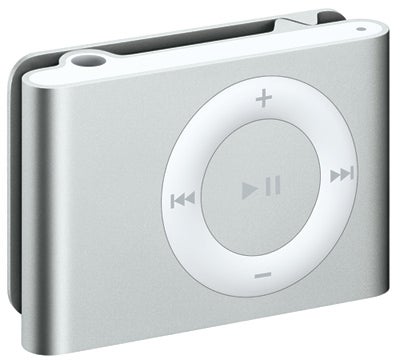 On the downside, the Shuffle struggled with the dynamics of the opening of Mahler’s 5th Symphony and the dramatic rasgueados on classical guitar piece Asturias, but then I’ve still to come across a music player that can produce enough oomph to do either of these performances any justice. With really complicated and full-on material such as Green Day’s American Idiot or The Prodigy’s Firestarter, it can start to struggle at louder volume levels, muddling the mid-range a touch. This is really getting picky though.


Finally, it’s also limited to playing MP3, AAC and AIF files – no WMA here or OGG –but you weren’t expecting Apple to start supporting Microsoft now, were you?


I probably wouldn’t like to have a Shuffle as my main music player, simply because it doesn’t have a screen and I like to have a modicum of control over the order in which my music plays. However, there are many things to like about the new Shuffle and it would make an ideal exercise companion or first-time player. It looks great, the clip-on design is practical and the shuffle approach makes a nice change from the usual, forcing you to sample more of your music collection than perhaps you might otherwise do day to day.


But its best feature is its sound quality. For £50 the only player that rivals it is iRiver’s T50 and, even without the screen, this makes it well worth considering for those on a budget.