You may be wondering why we’re reviewing the iPod photo some four months after it first came out. Well, the hard cold fact is that getting review samples out of Apple or its PR company has been like trying to get blood out of a…well, an Apple.


But it’s undeniable that since colour was introduced to the iPod, it’s been the reference point for all the colour screened competition. And with a little help from our friends at MR Systems, we were able to finally get hold of one so we can see what all the fuss was about first hand. 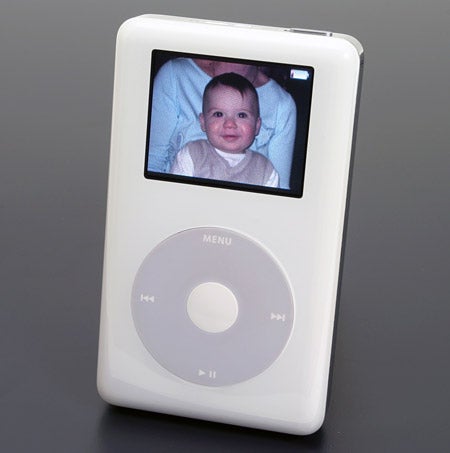 It’s a good thing that we did too, as my impressions of the iPod photo when the player was first released was that it was just too fat to be worthy of consideration. Yes, a colour screen sounded like a good thing but surely it couldn’t be worth the extra bulk? While the 3G and 4G players were pleasingly slimmed down compared to the first two generations, the iPod photos extra bulk seemed something of a step backward. However, once I started playing with it I quickly succumbed to the charms of having a colour screen, which I’ll describe in more detail a little later.


Other improvements over the monochromed units are increased battery life – taking it up to 15 hours if used exclusively for music and five hours when used exclusively for colour slideshows. Inevitably, actual battery life will vary between these figures depending on usage. To get to this figure the photo only has 17 minutes of skip protection rather than 25, which isn’t too much of an issue. It will recharge fully in five hours and fill to 80 per cent of its capacity in three. 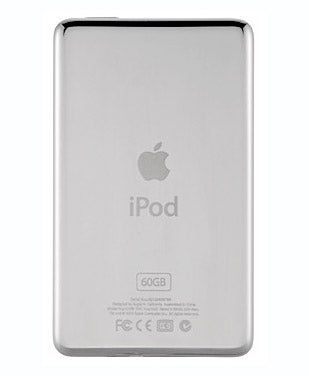 From the front, the iPod photo looks the same as the non-colour fourth generation iPods. The click wheel is a new design classic integrating the four buttons that were under the screen in the third generation unit. For those that aren’t aware, the iPod will play MP3 files natively, and always has, something that Sony has just got round to adding. It will also play VBR MP3 files, Apple’s AAC files, the obscure AIFF format, and Apple’s Loseless codec, which is more space efficient than WAV, which it also supports.


Since Apple has first introduced the iPod photo, it’s actually made some changes. The first was the name, dropping the capital ‘P’ from Photo, to bring it into line with with the ‘mini’ and the ‘shuffle’ players. The photo was also originally available in 60GB and 40GB capacities. The 40GB has since been dropped from the line-up and replaced with a slightly thinner 30GB capacity, shaving off 3mm and reducing the weight from a hefty 181g to 167g. This compares to 158g for the 20GB iPod (pictured on the right).

The prices of the iPod have also been lowered but in a sneaky move a lot of stuff that used to be included as standard is now missing. Gone from the box is the Dock, which also contains an S-Video output, enabling you to hook up to a TV using a better quality connection than the standard composite AV cable. Unfortunately this has been removed from the box as well. You also no longer get a Firewire cable, only USB 2 though most people won’t be too upset by this. Additionally, the carry case is omitted, while the remote control was removed from the standard box with the 4G iPod.

It’s a similar ploy to what Apple did with the Mac mini, offering a reduced spec in order to reach a more attractive initial price while making more money from add ons. Pretty sneaky really.


The integration between iTunes and iPod is one of the things that makes Apple’s player so unique. However, it’s also one of the areas of frustration. iPods will only import music from one PC, and unfortunately it’s no different for photos. It’s understandable for music because of copyright reasons but I can’t see the logic for images. If you plug your iPod into another PC, you can transfer images over onto the disk but not via iTunes, which means that they won’t be viewable on the screen. 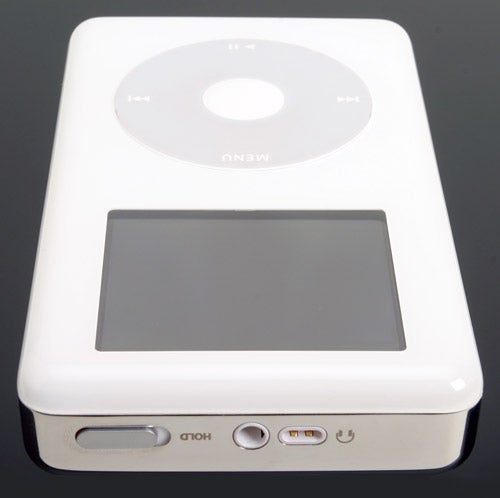 On its first launch the fact that iTunes was the only method of getting viewable imaages onto the iPod was a point of frustration for many users. Many people assumed that that you’d be able to transfer over pictures you’d taken on your digital camera and transfer them over when out and about. You could use the Belkin Media Reader accessory to transfer over pictures but you can’t then view the photos. You’d have to go back to your base PC and then re-import via iTunes. However, Apple has recently announced the iPod Camera Connector, which will finally deliver this functionality. Just plug your camera in and you’ll be able to transfer and view your photos – hallelujah.


One thing that iTunes doesn’t do is provide a database of your images, as it does for music. iTunes is great for organising and renaming your music, but it doesn’t let you do that with images, leaving you to do that in Windows or indeed, Mac OS. Instead you need to go into Preferences, where you can select which folders containing images. This option only appears though once you’ve plugged your iPod into your PC. This defaults to the My Pictures folder but you can point it anywhere you want. There’s also an option to copy from photos prepared in Adobe’s Photoshop Album application. 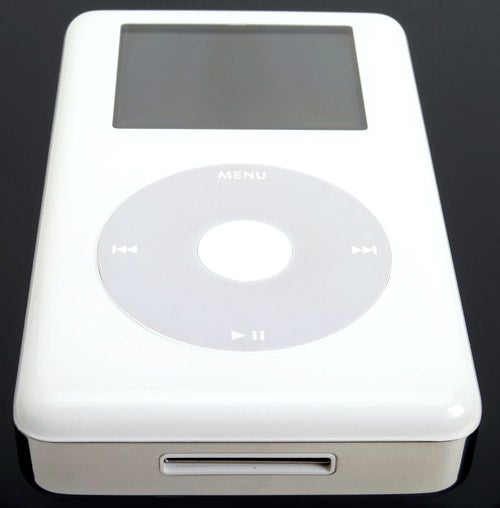 What iTunes actually does is to take the full resolution pictures and optimise them for the 220 x 176 resolution screen. This involves resizing and recompressing them and it does a pretty great job at this, with dithering and compression artefacts noticeable only with close examination. However, I got the best results by doing this manually in Photoshop CS by cropping to that exact resolution. With the images from my own Canon Ixus 500, iTunes put thin black bars at the top and bottom to fit the whole image on the screen, whereas my manual crop fit the screen perfectly, though inevitably that entailed losing part of the image. Generally speaking though you’re not going to want to do this manually as it’s fiddly and time consuming.

Once iTunes has done its work and you’ve copied over the images to the iPod, the clickwheel makes browsing through even a great number of images a breeze, a marked difference from other colour screen units I’ve tried such as the iRiver H10. Even browsing through your music is easier on the colour screen, and in a nice touch, if you’ve added album artwork into iTunes it’s displayed on the screen as the track plays. There’s also a slideshow function for photos and you can set the timings between images and turn transitions on and off. 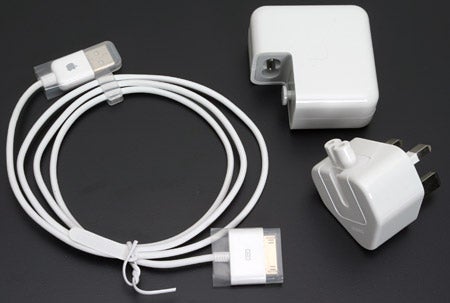 It has to be said though that the while browsing photos is a pleasure, the 2in screen just isn’t big enough to really do photos justice. This is compounded by the fact that you can’t zoom or pan around your images as you can on digital cameras.


So is the iPod photo worth it? Well the price drop does make it more affordable and at the fantasic price of £295 from MR Systems, the 60GB gives you the most MBs per buck of the entire iPod range. I paid £300 for my 15GB 3G iPod nearly two years ago but, I did get a dock, remote and a carry case included, so once you add these things on, the price isn’t as groundbreaking as it first seems. I also personally think that the 60GB is still too fat, so the 30GB could be a better option. 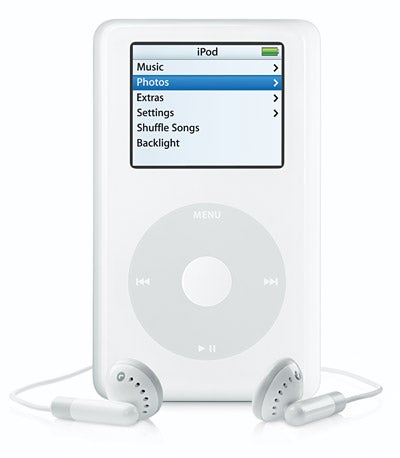 As with mobile phones, once you’re used to a colour screen you won’t want to go back. But if you haven’t already succumbed to the charms of the iPod photo, it’s probably a good idea to hang on another few months. Reports suggest that next generation iPods will boast far great battery life, and with greater capacity disks in the offing too the fifth gen iPod might be a perfect marriage of a colour screen unit with large capacities and a thin housing. It might be wishful thinking, but if Apple could throw in a bigger screen as well, then they’d really be no stopping the iPod photo from taking over the world. You have been warned.


Adding colour to the iPod does make it an even better product to use, for music as well as photos. But while being able to carry round a slideshow in your pocket is great, the 60GB unit loses points for its chunky chassis. I’d recommend hanging on for the next generation, which hopefully will deliver a svelter, more capacious and longer lasting iPod photo.

Many thanks to MR Systems, your friendly, neighbourhood Mac reseller, for loaning us an iPod photo for review. If you want to buy a Mac or an iPod, MR Systems can offer you a bespoke personalised service, which has got to be preferable to buying from a crowded Apple store. Contact Lenny Borg directly on 020 7697 2214 or email him at lenny.Borg@mrsystems.co.uk.