Apple may have blazed a trail in the world of digital music players for the past few years, but in the flash player stakes it’s beginning to fall behind the competition. Not in the number of players it sells, or the amount of legal music downloads its customers enjoy, but in what it’s managing to fit into its smaller players.


It still insists on not squeezing a screen onto its shuffle while other manufacturers’ tiny players are building them in. And its latest nano, despite much of the competition incorporating video playback features as standard, is still sticking to its music-only philosophy, even though it has a lovely colour screen. 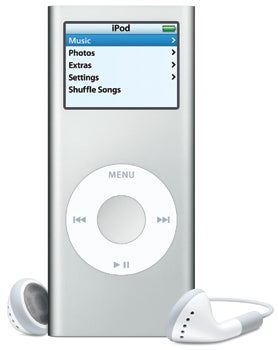 So is it a case of less is more? Possibly. There’s no doubt that the new nano is better engineered than the original nano. Though it looked superb, it was plagued with problems with its screen, which scratched and cracked easily. The problem was fixed by Apple, but not before the reputation of the nano had been damaged severely.


This time there’s none of this fragility and it manages to retain its class-leading looks. Like the iPod mini before it, the chassis is constructed using anodised aluminium in a choice of lurid colours. Unlike the candy bar mountain bike accessories of the early Nineties, however, the nano looks good in its colourful jacket and you don’t have to keep wiping fingerprints off it either. It feels extremely sturdy too. Push the colour screen firmly and there’s no evidence of discolouration or pressure points at all.

But apart from the new colours, and the iPod mini styling, is there anything that revolutionary going on here? Well, on the surface it would seem not. Apart from the styling, the nano seems to be identical to its predecessor. Its top edge still has just a hold control on it, with the headphone socket and iPod connector on the bottom edge. As with the previous nano, this one has the same sync connector as the bigger iPods, so you should be able to use many of the same accessories and use spare or old connectors if you have them lying around.


It still shares the same tried-and-tested click-wheel navigation system, not that this is a bad thing of course. I’ve used many MP3 players over the years and Apple’s system is still up there with the best, allowing you to browse through long lists of albums and tracks effortlessly. It does have its disadvantages – you have to use the hold switch more often than you do with players that don’t have touch sensitive controls in order to avoid turning the volume up and down inadvertently – but its ease of use outweighs this relatively small inconvenience ten to one. And, of course, its integration with iTunes is still brilliant, beating most other manufacturers’ solutions hands down.

Under the hood, however, it’s not the same old nano. The first clue comes in the menu system, which packs in far more features. This iPod may not have video playback, but it does add an alarm, to do list, pin-code locking facility and the ability to sync Outlook contacts and calendar appointments to its armoury. There are also four games here, if you get bored listening to your music on the train.


Perhaps more importantly Apple has given the nano’s battery life a massive boost. The first nano, while acceptable at around 12 hours, often suffered in comparison to the competition. This one isn’t quite up there with the very best, but 24 hours on a charge is not to be sniffed at and should see you through any long-haul trips. 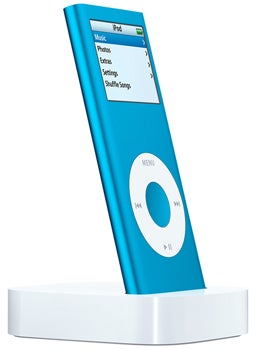 And let’s not forget that the new nano is now also available in larger capacities; up to a massive 8GB, though with the 4GB version you have a choice of more colours. It’s sobering to think that the nano’s largest capacity is 3GB more than the company’s original hard drive-based iPod, first announced in 2001.


The 4GB version reviewed here is good for around 1,000 songs according to Apple, and obviously encoding at higher bitrates will reduce this figure somewhat – something we’d encourage you to do, because the nano’s output is good enough to discern between a 128kbps encoded track and one ripped at 192kbps if you listen with a halfway decent pair of headphones. That’s not to say the earbuds included with the nano are complete rubbish, of course. They’re better than the usual dross, but still not as good as you can get for a relatively small outlay of £30 or more. 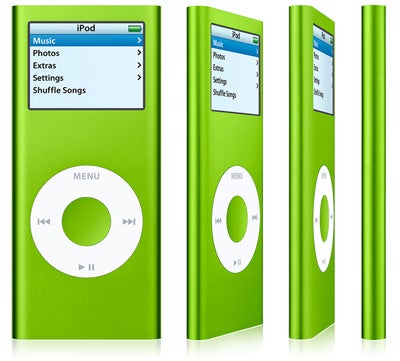 As with the shuffle I looked at a couple of weeks ago, this nano is blessed with plenty of brightness and clarity. The jazz guitar on Joshua Redman’s cover version of Tears in Heaven rings out realistically, and there’s a real kick to the flamenco-style Spanish guitar on Gipsy Kings’ Ternuras. The top end isn’t too harsh either. Play back a little of Sigur Ros’ much-played-on-the-BBC Takk album and the lead singer’s shrill singing never grates or sounds too sibilant.


There’s also enough mid-range oomph to provide rock and indie with drive and entertainment. Listening to Green Day’s classic albums International Superhits and American Idiot were really good fun, from the acoustic refrain of Good Riddance (Time of Your Life) to Boulevard of Broken Dreams, with Billie Joe Armstrong’s gravelly vocals reproduced convincingly over the top of the ripping guitars.

But the nano isn’t up there with the best in class from the likes of iRiver and Sony. It’s in the bass region that the nano falls down. You can hear the entire low end, but there just doesn’t seem to be quite enough body to it. The noisier parts of the soundtrack to Gladiator proved just too much for it, lacking the sheer power and drive to create the dramatic effect necessary, while the full-on wall of sound on Sigur Ros’ Glosoli confounded it completely. Massive Attack’s Teardrop needs a real thump to drive it forward and the nano just didn’t come up with the goods. Of course you can fiddle with the EQ to big up the bass, and the nano even has a bass boost feature, but I found both of these approaches unsatisfactory, particularly the latter which tended to produce an almost distorted-sounding, crunchy bottom end.

The other issue with the nano is the power of its output. Though you’re unlikely to be using it with anything other than ear-canal phones or earbuds, there are some who will consider connecting something larger. If this is the case, I’d suggest you try and give the nano a run out with your headphones of choice first, because, even at maximum volume, it doesn’t go very loud with difficult-to-drive cans. The top-of-the-range Sennheiser PXC 450s illustrate this perfectly, but I could also listen to my in-ear Shure E2Cs at maximum volume for short periods, without giving myself a headache.


In comparison to our current flash player of choice – iRiver’s Clix 2 – Apple’s latest nano has fallen behind the times a little. It does have a lovely colour screen but it can’t play video, its sound quality isn’t up there with the best and, though I haven’t mentioned it up until now, its music sound file support still only extends to MP3 and AAC, not OGG or (obviously) WMA.


So it’s not quite good enough to knock our favourite flash player off the podium, but there are still many good reasons to buy an iPod nano. Its navigation system and software integration is still the best around, it remains the best looking flash player on the market, the battery life is now excellent rather than average and finally, it is very good value at £111.56 for the 4GB player and only about £22 more for the 8GB version.