Available on PS4 (reviewed), PC
Apotheon gives us a vision of Greek mythology that even an ancient Greek might recognise – a world of heroes, gods and monsters, with visuals modelled on Greek art of the time. The talented artists and animators at Alien Trap have brought them to life across screens of virtual textured clay, staying true to the limited colour palettes and stylised forms of the originals. Its sprites seem composed of separate elements, all manipulated independently like the sections of an old shadow puppet.

This is one seriously striking game, where the impact of the visuals helps to make up for the familiarity of its narrative. It’s easy to describe Apotheon as God of War meets Limbo meets classic 2D Castlevania, but this isn’t Greek myth by way of Ray Harryhausen or the usual grab-bag of harpy/skeleton/Medusa cliches. From the way it mixes old-school 2D graphics with modern particle effects and lighting, to its quotes from classical texts, it’s the kind of game that feels arty, and wears its artfulness proudly. 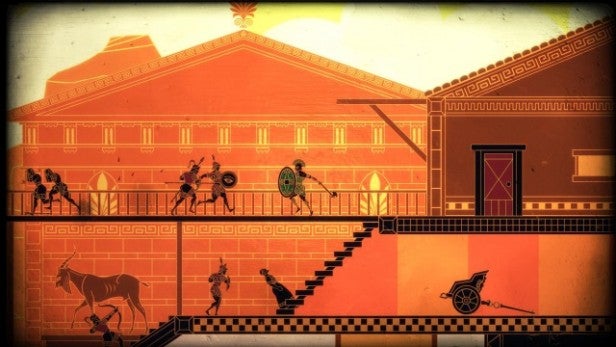 All the same, the premise isn’t a million miles away from God of War territory. Led by Zeus, the gods of Olympus have turned their back on the world of mortals, leaving mankind to wither from lack of grain, meat and sunlight, or die fighting one another for the food that’s left. His village attacked by raiders, a brave warrior finds himself the willing pawn of the goddess Hera, and sent to Mount Olympus to force the gods to – basically – call off the strike. What ensues is a trip through the stomping grounds of the key deities, battling their guardians, completing quests and earning or taking the sources of their power.

Some have descibed Apotheon as a greek-flavoured Metroidvania, in the style of ’90s favourites like Castlevania, Wonder Boy III and Super Metroid, but the comparison doesn’t hold much water. The Metroidvania games are all about exploring large open worlds where certain areas and paths are blocked until you can find the item needed to unblock them. Part of the pleasure is in exploring, noticing the parts you can’t get to, then wondering what you’ll need to get there. 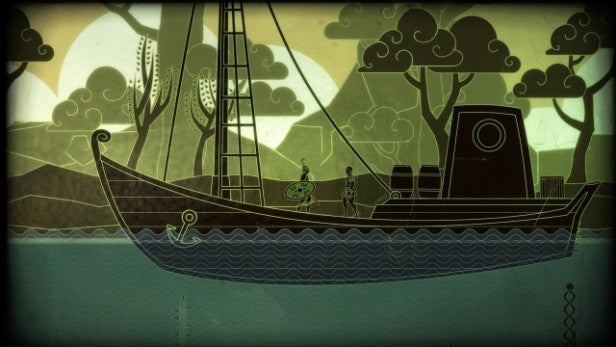 Apotheon does have a large world which you’re mostly free to roam at will, but the whole bit about items and unblocking is nowhere to be seen. It divides its world into discrete zones, each divided into several sub-sections. Completing an objective in each sub-section unlocks the main objective – and frequently a boss battle – after which that zone is pretty much done and dusted. It looks like a Metroidvania title, but you actually play it as a more linear action game.

In other words, it’s a straightforward game of combat and exploration. The latter is pretty good. Each zone has its own distinctive feel, with hidden areas to uncover, secret caches of arms and armour to collect, and layouts that test your ability to navigate and spot potential routes rather than your Mario-style platform gaming skills. There’s a real sense of adventure when you open up a new area for the first time. 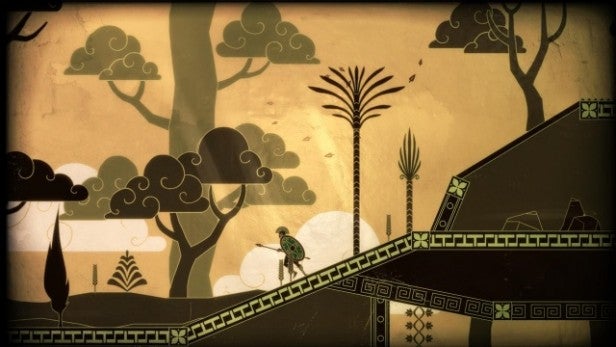 The combat has its strengths as well. Weapons fall into different classes, including daggers, bows, swords, axes, throwing knives, javelins and spears, among other things. Different weapons work most effectively at different distances, and some are much slower or less powerful than others. Ranged weapons can be aimed by shifting a little reticule up and down with the stick on the controller, and you can use shield blocking moves, leaps and rolls to get out of trouble. You’ll face a range of opponents, from aggressive wolves to hulking giants, and each one demands a different choice of weapons, and a different strategy.

Sadly, the combat has its weaknesses as well. There’s something insubstantial and imprecise about the whole feel, where blows don’t seem to connect, and you can easily be swamped by groups of baddies, flailing with your axe or sword but failing to hit anyone. Some fights turn into bizarre slapstick sessions where everyone is bouncing around the area, not actually whacking anyone, and the AI struggles to navigate stairs and platforms.

Most seriously, this is a game where you need to be able to swap weapons quickly mid-fight, not least because your weapons break frequently. Unfortunately, switching weapons means tapping left and right on the D-pad to move between your weapon types, then tapping upwards and downwards to select your weapon of choice. It’s a nightmare in a hurry. 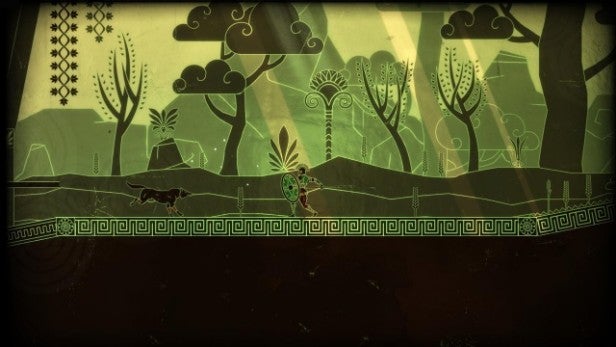 Nor is the action as well paced as a God of War title. Enemies are distributed evenly around the level and the odd set-piece is thrown in here and there, but there’s no real sense that the fights are being orchestrated to add variety or ramp up the challenge. In fact, Apotheon is at its best when it steps away from its combat-heavy core to give you a thrilling hunt-and-be-hunted boss battle, a section full of puzzles or a daring prison escape.

It’s a deeper game than it first appears, with an intriguing crafting system for brewing up potions, traps and explosives, and a mass of collectible weapons that, once discovered, can be purchased again from Olympus’s Black Market. Yet you can’t help feeling that it could have gone even deeper, with experience systems, more interesting weapons, more puzzles and a more adventurous feel. If the gameplay matched the brilliance of its visuals, this could have been an absolute smasher.

Verdict
Apotheon is a game with distinctive and inventive visuals, but one where the gameplay itself is, well, solid. It’s a very decent game with a good atmosphere, but there’s little beyond the graphics to make you go “wow”. Right now it’s free for PS Plus subscribers, and thoroughly well worth the download, but go in expecting a good, old-school action adventure game rather than some innovative indie masterpiece. For all its classical influences, it’s not quite a classic itself.