Hands-on with the barmiest laptop of Computex 2017

Gigabyte’s Aorus X9 was first demonstrated as a concept product at CES in January. Now at Computex, this incredible machine looks set to make it into production and hit store shelves before the end of the year.

With SLI graphics, an overclockable processor, and one of the most impressive chassis designs I’ve ever seen, this might be the new ultimate gaming laptop. Needless to say, for many of us parting with the necessary cold, hard cash – or even 0% interest finance for three years – for an X9 remains an impossibility; a Gigabyte representative told me that it will cost “under £5000”. So only the price of a nearly-new hatchback – but your hatchback doesn’t have dual GTX 1070s, does it? 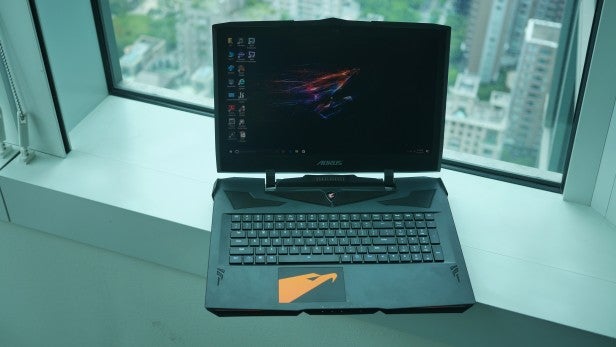 Starting with design, it’s clear that Aorus has thrown everything – including the kitchen sink – at this laptop. The 17.3-inch machine features some incredible details, with an almost sports car-bonnet styling when closed, and spaceship appeal when it’s open.

The area above the keyboard is dominated by fan vents, but sitting between them is a series of LED lights that indicate the current performance or temperature levels of your machine for quick, at-a-glance diagnostics. Gimmicky, sure. Cool? Most definitely. There are RGB lights on the front edges and on the rear vents, too.

The keyboard itself uses mechanical switches. Granted, they’re not proper desktop switches, but in a laptop “just” 30mm tall this remains impressive. They’re probably my favourite laptop-specific mechanical switches, with 2.5mm of travel and a super-responsive, clicky feel.

The hardcore gamers among you will have spotted that there are no gaming shortcut macro keys. It’s curious that there wasn’t the space on a laptop of this size. Each key is individually backlit with RGB LEDs, and you can customise every LED on the entire laptop to do your bidding. 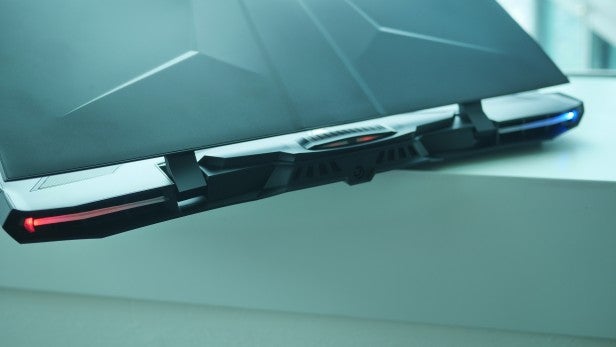 Although no weight figure was provided for the X9, from picking it up I’d hazard a guess that it weighs in the region of 3.5kg, if not a little more.

The screen will be available in a couple of different specifications: either opt for a 120Hz IPS panel with a 2560 x 1440-pixel resolution, or go for a high-end, Ultra HD panel that can cover 100% of the Adobe RGB colour gamut for the ultimate in screen tech.

Aorus includes not one, but two Nvidia GeForce GTX 1070s in the Aorus X9. This setup nets a claimed 30% greater performance than an individual GTX 1080. At a cost, of course. If you do choose the UHD screen, this laptop will play any game at that resolution with ease. 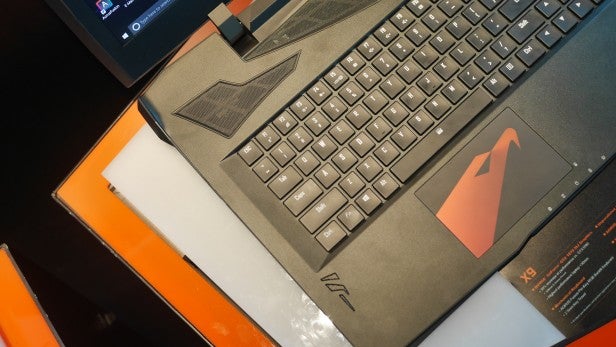 The processor is likely to be an Intel Core i7-7820HK. This quad-core chip boosts to a barmy 3.9GHz, but that ‘K’ on the end of its model name denotes an unlocked clock multiplier, meaning you should be able to overclock the processor if you feel the need.

Sadly, the X9 didn’t have any games installed on it, so I wasn’t able to get any proper hands-on time with the latest titles. I also wasn’t able to hear the fans or get a proper look at thermals. Past Aorus laptops have proved to be a bit loud, although with such a huge amount of cooling gear available, I feel like this should be an easy problem to solve. 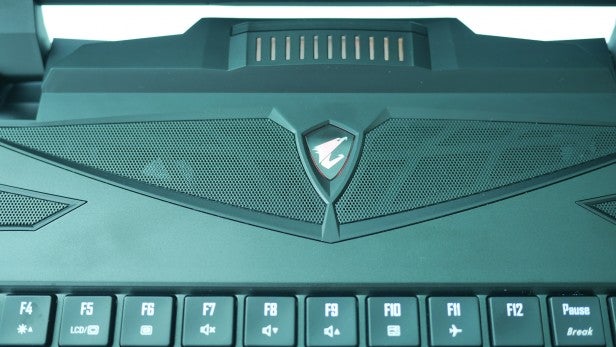 The Aorus X9 is a stunning machine and embodies the Aorus brand perfectly. The company surely won’t sell many, but as a so-called ‘halo’ product that influences future, more affordable Aorus laptops, it’s brilliant. I’d go as far to say that it ties with the Asus ROG Zephyrus as the most technically impressive laptop at Computex 2017.