My benchmarks were run at the X7’s default settings, with the CPU at its peak speed of 4GHz, and the GPU at its first overclocked level of 1,468MHz.

The Aorus had no trouble running games at its native resolution. Its weakest 1440p score was 92fps in Middle Earth: Shadow of Mordor, while it averaged 101fps in Dirt Rally and 106fps in GTA V. Those two latter scores easily beat the Gigabyte. However, the Scan’s GTX 1080 was always ahead.

The GTX 1070 ran my games at 4K, too: the Aorus handled Shadow of Mordor at 50fps and was a little faster in both other titles. 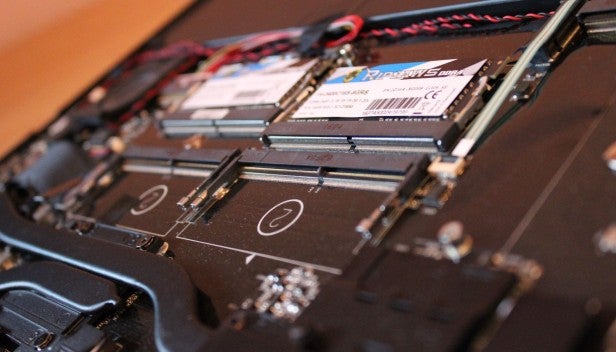 Those results are marginally quicker than the Gigabyte P35X v6, but a long way behind the Scan 3XS LG17 Carbon Extreme. They should also be taken with a pinch of salt – the test games are demanding, but several games are tougher. If those are your favourites, you’ll need a GTX 1080.

The Aorus’s overclocking tools gave the GPU a modest bump. The laptop’s original 3D Mark Fire Strike score of 12,613 improved to 13,065 with the clock boosted to 1,543MHz. That translated to a small gaming boost, with two frames added to the X7’s Dirt Rally result.

The overclocked processor almost kept up with the Scan’s desktop chip. Its Geekbench results of 4,025 and 14,585 are only a few hundred points behind, and the machines were similarly close in PC Mark 8.

The Aorus isn’t the quickest in application tests, but it’s still one of the fastest laptops around – it’ll easily cope with work as well as play. 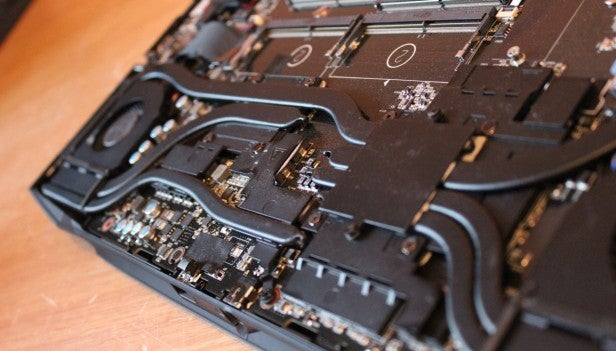 You won’t lose out if you tone down the laptop’s overclock, either. With the CPU reined in to 3.6GHz it lost a couple of hundred points in each application benchmark, but that’s it.

The huge power, overclocking and slim design made me worried for the Aorus machine’s thermal performance – and, sadly, my concerns were valid. There’s a lot of versatility here, but high-end gaming on this machine produces plenty of noise.

By default the Aorus’s fans run at maximum speed, so I stress-tested those settings alongside the system’s default clocks. The CPU and GPU delivered peak temperatures of 98°C and 81°C – the former is particularly worrying – and the machine also made a huge amount of noise.

It’s loud enough to prove distracting, even with headphones. If you’re using the laptop’s speakers then you need to really pump up the volume.

Gameplay saw the fans ramp through three different noise levels. That maximum fan setting runs the spinners at around 5,100rpm, while the normal option drops that to 4,800rpm. That minor drop sees the GPU temperature rise to 85°C and the noise remain just as intrusive.

The quiet option drops the fan speed to 3,000rpm, which makes the fans barely audible – but this option isn’t suitable for gaming: the GPU is severely throttled, with its core dropped to its stock speed of 1,442MHz and the memory to just 2,000MHz. The CPU and GPU temperatures were a modest 66°C and 68°C, but that’s no surprise given the low speeds. 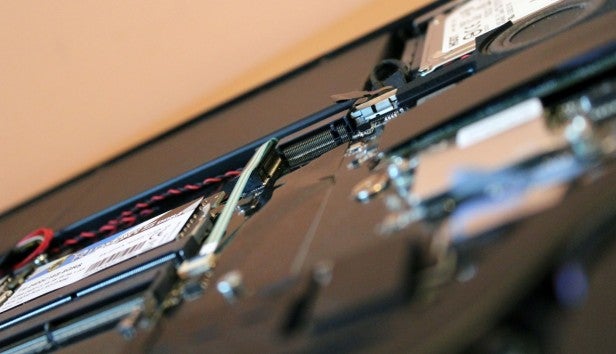 The laptop’s peak GPU overclocking mode made little difference to temperatures, and removing the CPU stress-test also had a negligible impact on noise levels.

The Aorus had issues with heat distribution, too. During gaming tests the keyboard became a little hot, while uncomfortably warm air was pumped from the vents at the back and sides. The underside became too hot to touch.

The fan noise will vary depending on the intensity of individual games but, for the most part, this machine’s thermals are disappointing. It’s louder than its rivals, and that noise is accompanied by high temperatures throughout.

The Aorus’ screen fires off an impressive set of features. This is the first time I’ve seen a laptop with Nvidia G-Sync and a 120Hz refresh rate, which is double the rate of most gaming laptops’ screens.

The inclusion of 120Hz G-Sync means games will run with perfect, synchronised smoothness. It also means the Aorus can run G-Sync with higher framerates than the Scan, which could only manage 60Hz.

The X7’s 2,560 x 1,440 resolution makes loads of sense for this size of laptop. That’s high enough to provide good detail in games, but not high enough to put undue strain on the GPU. It also means there’s no need to use the Windows scaling settings, although pixellation is visible at close quarters. 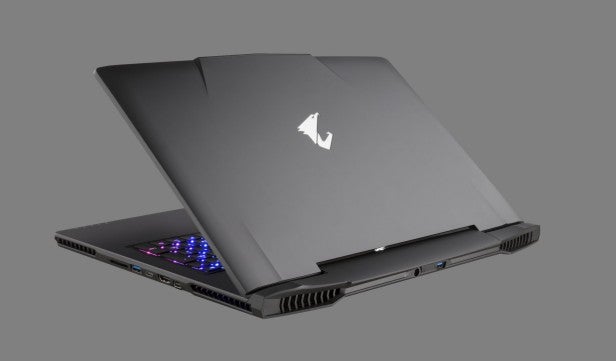 The inclusion of 120Hz G-Sync helps the Aorus out-sync rivals, but both main competitors fight back. The Scan and Gigabyte have 4K panels, and the Aorus’s panel didn’t perform well in benchmarks.

Its initial brightness level of 351 nits is fantastic, but the black level of 0.55 nits is poor – and that means a contrast level of just 638:1. That’s miles behind the Scan’s 1,106:1, and it means colours lack punch and definition between similar shades.

The Aorus’s colour temperature of 7,124K is too cool, and the 81% sRGB coverage level is disappointing, with weaknesses in red, purple, pink and light blue shades.

These tests were conducted with the Aorus’ 6800K mode, which is chosen by default. The Aorus comes with 5500K, 6000K, 6500K and Native Colour options – but, again, none of these modes delivered significant improvements.

Colour temperature declined a tiny bit with each mode engaged, but it never dipped below 7,000K. The average Delta E never veered from 4.3, and other benchmark results remained near-identical to the default results. The screen barely looks different with these modes engaged.

The uniformity results were similarly mediocre. The Aorus’s panel lost 14% of its brightness along the top edge, 13% in the middle and 17% along its bottom row. The colour temperature and accuracy levels barely shifted, but the Scan is far better in this regard.

The X7 v6’s screen is good enough for gaming, especially thanks to pure brightness levels and the inclusion of Nvidia G-Sync.

That said, both rivals are better – and not just because they’re 4K. The Scan is superior in most benchmarks and also includes Nvidia’s synchronisation technology. Gigabyte’s screen doesn’t have G-Sync, but it’s better in benchmarks than both other laptops.

The Aorus has a pair of 2W speakers and subwoofers, and audio quality is great. The Aorus uses its RPG gaming mode by default, and there’s plenty to like: the bass is detailed and deep without proving overwhelming, and the high-end is solid. The mid-range is a tiny bit muddy, but that’s a minor complaint. There’s loads of volume too.

The speakers are miles ahead of the weak units inside the slim, subwoofer-free Gigabyte, and they’re similar to the Scan’s.

I like the Aorus Audio Equalizer app. It’s got a full equaliser and options for modifying the audio for the laptop speakers, external speakers, headphones and microphones.

It also has modes for a huge variety of different scenarios, although these operate with varying levels of success. There’s little difference between the Gaming section’s RPG, Racing, Strategy and Shooter settings. The Movie section’s Action mode is muddy and the Sci-fi option is even worse – but the Horror setting is far too tinny.

The Music options are better. The Rock setting offers superb balance, while the Jazz and Rap settings are a little deeper. I’d never use the Ballad setting, though, as again it’s far too tinny.

Used as our main laptop for the review period
Tested for at least a week
Used consistent benchmarks for fair comparisons with other laptops
Reviewed using respected industry benchmarks and real world use
Previous
Aorus X7 v6 Review Next
Keyboard, Trackpad, Battery and Verdict Review