AOpen seems to be a firm believer in the small form factor (SFF) and has released a wider range of systems than anyone else, bar Shuttle of course. This latest creation from AOpen differs from the ones we’ve seen in the past, not only because it’s using a Pentium M platform, but also because it’s about half the height of previous SFF systems we’ve seen from AOpen. The MZ915-M is one of the smallest SFF systems currently available and measures in at an impressively tiny 200 x 106 x 320mm (WxHxD). 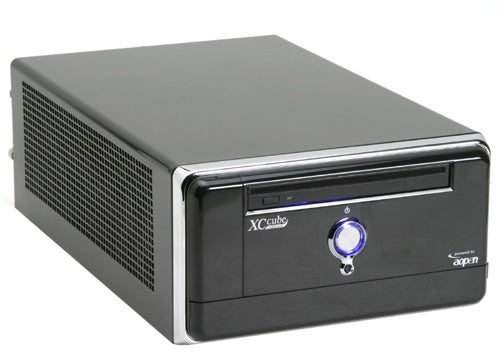 This brings with it certain layout problems, like were to fit the PSU. It doesn’t take a genius to figure out that an external PSU is the best solution to this problem and this is just what AOpen has done. The power brick is similar in size to that of high-end laptops and takes up a fair bit of space. Rather than using a proprietary connector to allow for 12, 5 and 3.3V to be supplied to the system unit, AOpen has fitted an internal power converter that turns the 19V feed into suitable voltages.


In general use with a 2.13GHz Pentium M 770 processor, 1GB of DDR2 memory and a SATA hard drive fitted the MZ915-M never used more than about 60W of power – with a Windows desktop power draw of around 45W. So if nothing else it’s very cheap to run in terms of electricity costs. It is also very quiet with only a single fan – on the CPU cooler – which is thermally controlled by the BIOS. 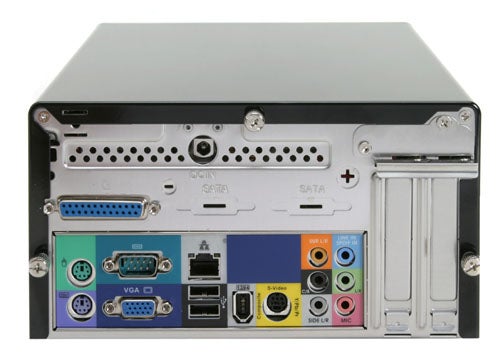 Lifting on the lid you’re greeted by a very cramped interior that is quite hard to work inside, due to the power converter being placed on top of the system. This is not completely removable either, due to it being tied up with cable ties and connected to the various power points inside the case. The processor is easy enough to fit and the CPU cooler is clipped in place in the same way as with previous XC Cubes. It’s slightly more difficult to fit the hard disk and optical drive – you need a slim line laptop style optical drive due to the small dimensions of the MZ915 – but the removable drive caddy makes this easier than it could’ve been.

An adapter is provided for the optical drive to work with a standard IDE connector and a floppy style power connector is used for powering it. AOpen even supplies a replacement front that should fit most slim line drives, apart from the slot-in type which I happened to have at hand. The replaceable front matches the colour of the MZ915-M and if you can’t fit it to your drive AOpen has supplied a couple of strips of tape with the correct colour that can be used instead. 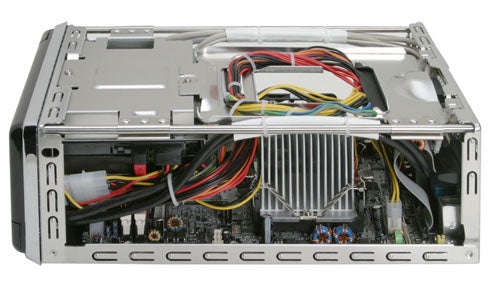 A word of warning here, you can only use a SATA hard drive if you fit an optical drive, as there is only a single IDE header and the cable supplied for the optical drive only has one connector. For those that don’t find the integrated Intel 915GM graphics sufficient for their needs a single x16 PCI Express slot can be used, allowing you to push higher frame rates. However, it’s not easy to find half height graphics cards – that said AOpen has suitable 6200 and 6600 cards that could be used. A single PCI slot is also available, again half height.


Looking around the back of the system you realise that the MZ915-M offers a wide range of connectivity options. There are two PS/2 ports for keyboard and mouse, single serial and parallel ports, a D-SUB connector for the integrated graphics as well as a TV-out connector which allows for composite, S-Video and component video output via a small dongle. Add to this two USB 2.0 ports, an Ethernet connector for the onboard Gigabit Ethernet controller, a six-pin FireWire connector and six audio jacks for the onboard 7.1-channel Intel High Definition Realtek ALC880 controller – one of the 3.5mm jacks doubles up as optical S/PDIF input. It’s a shame that AOpen didn’t include a DVI connector, as this would have allowed for better image quality if you’d wanted to connect the MZ915-M to an LCD or plasma display.

Behind a flap on the front of the system are a further two USB 2.0 ports, six-pin and a four-pin FireWire connectors, headphone and microphone sockets and an optical S/PDIF out. On the left hand side is another flap that hides two memory card readers – a first on an XC Cube – that accept various CompactFlash, SD, MMC, SmartMedia and MemoryStick formats.

The manual is of average quality, covering the steps you need to take when setting up the MZ915-M. However, the manual is fairly generic rather than system specific – also, as is often the case with Taiwanese products the translation leaves a lot to be desired, but it also injects some amusement into the build process. A quick setup sheet provides the information that more seasoned users will need and as there are generally no jumpers or switches that need to be changed around, there shouldn’t be any problems putting it together. 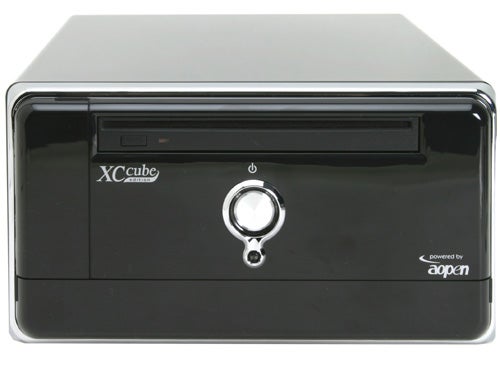 Performance wise the MZ915-M is on par with the Pentium M motherboards we’ve looked at in the past. It might not be quite as fast as the latest desktop PCs but it is virtually noiseless and as a media PC in your front room the MZ915-M makes a compelling case (no pun intended) for itself. There are a few drawbacks such as expandability but AOpen offers an external drive case that connects via USB and can house two 5.25in drives – although to be honest, if you’re desperate for drive space, you’re not going to be looking at a tiny solution like this in the first place. 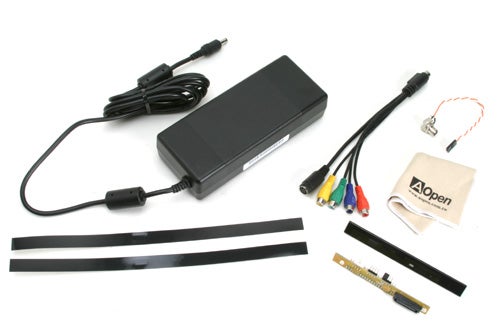 The cost is really the major issue here, but to be fair, the bulk of the cost isn’t down to AOpen. Basically Intel is charging a significant premium for its mobile chipsets compared to the desktop parts, plus the CPU itself is going to set you back a fair whack too. At £235 including VAT the MZ915-M is quite expensive, but for now it’s a one of a kind solution, although I’d expect to see more Pentium M system shrinking down to this size, if not smaller. Considering that AOpen is going to launch its Mac Mini-like Pandora system later this year, it seems like the MZ915-M is only a stop gap.


The AOpen XC Cube MZ915-M is a very small and quiet system, it doesn’t have the power of bigger machines but a system like this isn’t about power. For those looking for a compact media PC to connect to their TV, this could be the ideal choice.