The moment you fire up the AOC, it’s immediately obvious that this is a quality monitor. Viewing angles, contrast, colour accuracy and colour saturation appear as I’d expect them to on a good-quality IPS screen.

What’s more, under test conditions this monitor is no less impressive. Straight out of the box, at maximum brightness, the AOC hit a plentiful 280 nits, while black level hovered at 0.278 nits, making for a contrast ratio of 1008:1. Meanwhile, colour temperature was a touch off, at 5,883K, but still within touching distance of our ideal of 6,500K. Likewise, gamma was 2.12, which is very close to the ideal of 2.2.

Dialling back the brightness and tweaking the colour temperature, I recorded a colour temperature of 6306K, maximum brightness of 158 nits and black level of 0.179. That only makes for a contrast ratio of 892:1, which is a smidgen behind the likes of the Philips BDM3490UC, which maintained its 1,100:1 contrast at lower brightness levels.

Nonetheless, those figures reflect a monitor that doesn’t look grey and washed out, but rather copes well when displaying deep blacks and bright whites at the same time.

AOC claims the U3477PGU can display up to 1.07 billion colours, and sure enough this is reflected in its colour accuracy, with it hitting an impressive Delta E of 0.7 – that’s in touching distance of professional monitors. However, this isn’t an AdobeRGB-capable monitor, so its colour space coverage is only 98% sRGB and 73.2% AdobeRGB.

The uniformity of brightness and colour across this large panel is impressive too. At most, there’s a drop in brightness of 5.9% in the top left-hand corner, as compared to the centre, while the rest of the display is mostly within a couple of percentage points.

Likewise, colour accuracy drifts by at most -1.64%, again in the top-left corner. Both maximums here are well below the level where it would be noticeable to the naked eye.

Unfortunately, it isn’t an entirely clean bill of health for the U3477PQU. While it excels in almost every image-quality test (apart from that slightly low contrast), it puts in a poor performance when it comes to input lag. The Leo Bodnar Input Lag Tester reported the figure varying wildly but never dropping below 24ms, and regularly being upwards of 50ms.

On average, the AOC has an input lag of 35ms, which is two whole refreshes (frames) of the screen for a 60Hz screen such as this. Ideally, input lag should be less than 16ms (one frame), but it is acceptable if numbers creep slightly over that. Once you’re regularly pushing two whole frames, however, you’re at the point where any reasonably competent gamer will notice the lag in fast-paced games.

As such, the AOC monitor simply isn’t a good choice for gamers who often indulge in multi-player FPS games, where reaction time is absolutely crucial to gaming success. 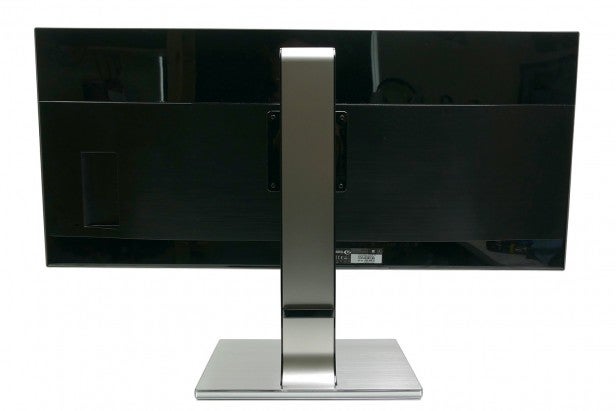 The AOC U3477PQU houses a pair of 7W stereo speakers that will automatically pipe through audio from any DisplayPort and HDMI sources. For DVI and D-SUB inputs, there’s the audio input jack.

Quality from the speakers is pretty ropey. They sound tinny and weak, and although overall volume can be pushed to a reasonable level, there’s a shrill quality that doesn’t make for enjoyable prolonged listening. Also, while the lack of bass is something of a given, there’s a slightly muffled top-end too.

All told, they’re only really good for watching the odd YouTube clip at low volumes, and not ideal for those office moments where a group wants to gather round to watch the latest trailer for a new movie release. All of which makes me thankful for the fact that a headphone jack is included too. 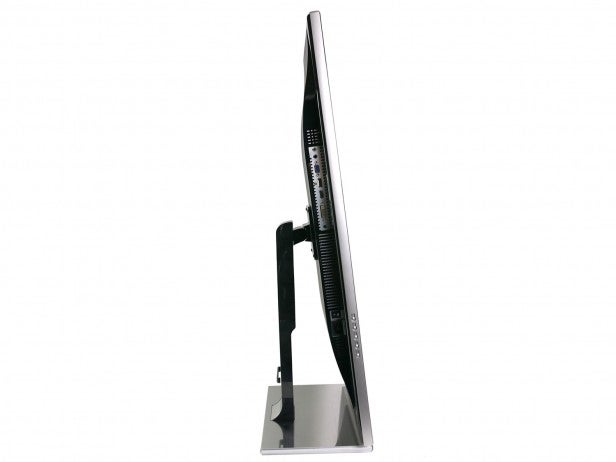 This is an excellent monitor for those seeking the wow factor and screen space of a huge, widescreen monitor, but don’t want to compromise on image quality. Curved-screen alternatives may just edge it on the first of those, but in every other regard the AOC U3477PQU is a better option thanks to its height-adjustable stand and lower asking price.

I have a few issues with the on-screen menus and the weak speakers – but there are few other slip-ups. It’s only gamers who will need to show caution; this screen’s high input lag will affect fast-paced games where reaction time is of utmost importance.

If competitive gaming is high on your list of priorities then this monitor probably isn’t for you, but in every other regard, the AOC U3477PQU is a superb buy.