The AOC U3477PQU is simply one of the most desirable monitors you can buy right now. Its combination of a huge 34-inch panel, along with its ultra-wide 21:9 aspect ratio, high resolution and top-spec IPS LCD tech, means it ticks just about every box in terms of high-end monitors.

It may lack the curve of models such as the Dell U3415W and Philips BDM34U90C, but in return you get a height-adjustable stand and a lower asking price, with the U3477PQU retailing for just under £500.

This is one seriously elegant monitor. The ultra-wide aspect screen itself is impressively slim, but it’s made to look even thinner thanks to it having one of these new borderless panels, where the already-thin bezels are set behind the front panel of plastic. The panel is then set off perfectly by the simple, brushed-metal base and slender stand.

Round the rear of the monitor, a gently bulging section neatly incorporates all the connectivity and the power supply. Although the back is plastic, the combination of a brushed effect and gloss black looks nice enough. 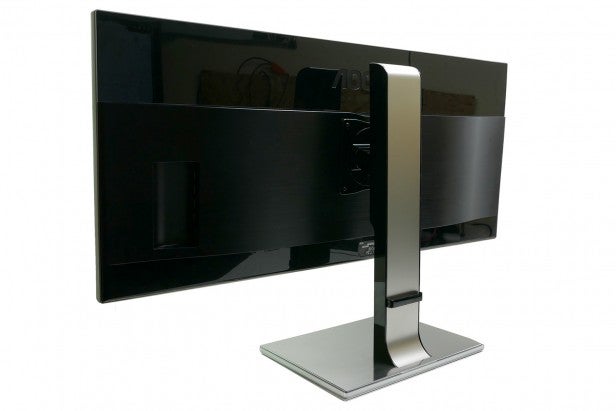 One downside, however, is the manner in which the monitor mounts to its stand. It uses a standard 100 x 100mm VESA screw mount, and although this means the display will be compatible with other third-party monitor stands, attaching the two parts together is a slightly awkward affair. Both monitor and stand are fairly bulky and heavy, so in order to make it more manageable, you’ll need a large, clean surface on which to rest the monitor face-down while you connect the two parts.

Otherwise, there’s little left wanting. Connectivity options are decent, with one each of a DisplayPort, HDMI, DVI, and D-SUB (VGA), plus there’s an audio input and headphone jack. The rear is also home to a pair of 7W speakers.

On the right you’ll find a USB hub with four ports. However, rather oddly, the input for the USB hub is also positioned on right edge, next to all the other ports – this isn’t the tidiest option when it comes to cable management.

In addition, only two of the ports are USB 3.0, which makes it complicated to not only locate the socket and plug in the cable the right way round, but also to ensure you’ve located one of the USB 3.0 ones. 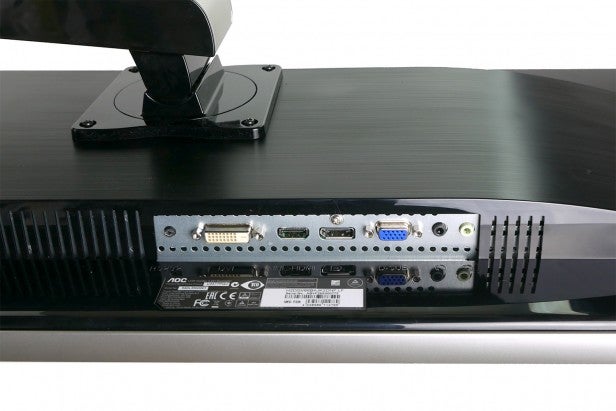 As mentioned, the stand offers height adjustment, and there’s plenty of it too. The top edge of the monitor runs from 500mm high, all the way up to 627mm. The stand can also pivot round through a full 90 degrees to a portrait orientation. It’s such a massive screen I’m not too sure why you’d ever position it that way but at least it makes it easy to see and reach the connections on the underside. It’s possible to tilt the monitor, too, with a range of around 30 degrees on offer.

That’s it for the main features. This isn’t a gaming-orientated display, so there’s no high-speed LCD panel or G-Sync controller. Instead, this monitor really is all about its display.

As mentioned, physical setup of this monitor takes some effort, thanks to the slightly awkward screw-mounting system. Once past that, however, it’s quick and easy to get it running.

Thanks to the height adjustment and rotation, it’s easy to plug in all of your cables and set the monitor to the right height. What’s more, the size and resolution of the monitor means there’s no need to worry about Windows scaling options. With 3,440 x 1,440 pixels on a 34in screen, you get an ideal pixel pitch of 109ppi.

AOC provides software that can be used to divide up your desktop so that it’s easier to stack windows side by side, rather than have them stretch across the width of the screen. However, the software certainly isn’t essential and I got on quite happily without it. 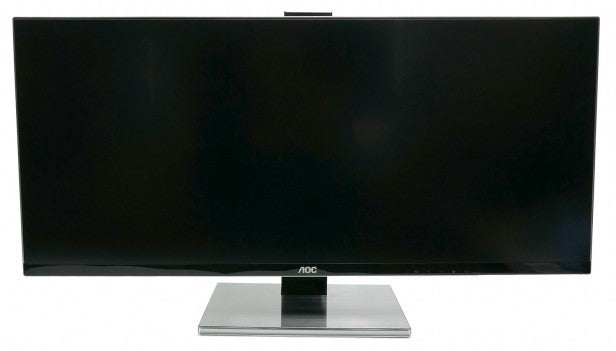 One thing you will have to take care of is brightness, which out of the box is set too high. Otherwise, the default mode setup isn’t at all bad. Either way, in order to tweak any of the settings you’ll need to dive into the on-screen menu, which isn’t the finest I’ve ever used.

It’s controlled with physical buttons hung on the underside of the bezel, with little logos on the front indicating their position. Once you’ve memorised their layout they’re simple enough to operate without having to look at what you’re doing.

However, the menus themselves are far less praiseworthy, thanks to the unintuitive sideways-scrolling layout that bears no relation to the layout of the buttons. Plus, it’s huge and over-stretched so that everything looks pixellated and jagged. As ever with such things, issues won’t be ongoing. Nevertheless, initial setup and is hampered by the clunky system.

Another particularly annoying foible is that you can’t adjust brightness when the sRGB colour mode is selected. This is a shame, since it’s otherwise the most colour-accurate monitor right out the box. Thankfully, however, the Natural colour option is close enough that most users will find it adequate.