Portable monitors occupy a very specific corner of the market. Their pitched at hot-deskers, mobile workers, freelancers and some students – basically anyone who needs a bit of extra screen acreage wherever it is they’re working that day.

People who work from one of two places – their employer’s office or their home – probably won’t need such tech. However, if your current boss is too stingy to furnish your hot-desking area with some new monitors, or your budget simply can’t accommodate a static monitor at home right now, then the £130 AOC I1601FWUX might be right up your street. But be warned, the screen is only good enough for basic office work. 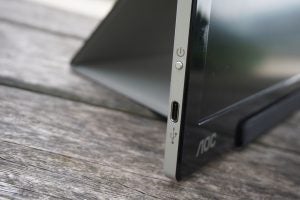 There’s no internal battery, so you don’t need to lug any extra chargers around. You’ll need just a USB-C cable for both the video and power, and one is supplied in the box. As such, if you’re working from a coffee shop, library or shared workspace then you’ll need to hunt for only one mains socket.

AOC says that the typical power draw of the I1601FWUX is 8W. When using the I1601FWUX with our Dell XPS 15 2-in-1, I found that following two hours I was down to 40%. This is with Wi-Fi on and music streaming on Spotify and YouTube in the background, using it as we would if it was our day-to-day work device.

Included in the box is a foldable iPad sleeve-esque kickstand that has magnetic strips built into the ends, so that it snugly locks into position when you fold it up. Combined with the rubberised coating on the base of the stand, this gives the monitor a solid amount of grip.

It’s also easy to shift around on your desk – if you need to feng shui things to make way for a steaming mug of coffee, or to make room for your cat that just leapt up to try to ‘help’ with your review.

Cleverly, the stand extends to cover the whole screen. The magnetic strips come into their own again, attaching to the bezel, so that when you’re on the move the I1601FWUX will be less vulnerable to scuffs, nicks, and scratches. 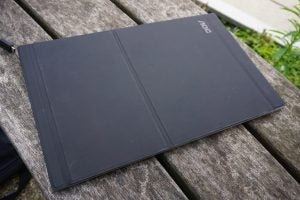 If you’ve set it up correctly, then the I1601FWUX will be reclining back at an angle of five degrees. You can, if you want, also invert the stand so that the I1601FWUX tilts back at 25 degrees, but AOC recommends that you don’t do this. While in practice you just about can do this – if, for some reason, you preferred working with the monitor at such an angle – this makes the stand about as stable as a three legged donkey, so don’t bother.

The stand is designed in such a way that it will also support the I1601FWUX if you want to stand it up vertically, which you might want to do if you want a monitor dedicated entirely to TweetDeck columns.

In terms of external controls, there’s the power button… and that’s it. If you want to tweak any of the settings, you’ll need to use the on-screen controls. 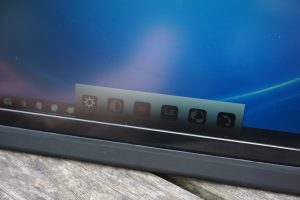 The lack of external controls is compounded by a very limited and faffy on-screen display. If you want to crank up the brightness, adjust the contrast, change the language or do anything with the display at all, you press the power button once.

A menu then appears at the bottom of the screen, giving you the choice of six options: brightness, contrast, overdrive mode, low blue mode, language change and exit.

Selecting what you want is a case of cycling through the menu by pressing the power button then waiting three seconds. The icon will flash and then you’re in. For brightness and contrast, the power button will let you increase levels incrementally up to 100, dropping back down to zero when you press beyond this.

All of this is perfectly workable — it’s just a little bemusing. We’d have preferred a mechanical ‘back’ button there, or any kind of secondary control that makes wading through that menu easier.

Seeing as the I1601FWUX works in sync with Windows 10’s native night mode, low blue mode feels a little redundant, as does overdrive mode — you’re not going to be doing any gaming on this, although you might want to watch the odd YouTube video.

Overdrive is set to ‘off’ as standard, and for much of the time you’ll probably want to leave it that way. Ghosting – that unsightly blur caused by fast-moving objects on digital displays – was very noticeable on this video, but we found that bumping up the I1601FWUX to its medium overdrive setting mitigated this.

The CD that came with the review sample didn’t feature the Windows drivers needed for our Windows 10 Dell XPS 15, so we had to download this directly from AOC’s site. At the time of writing, software for macOS devices wasn’t available, but AOC does offer drivers for Apple machines, so it’s likely that this is only a temporary situation.

Once you have the right drivers installed, you’re done. Just plug it in and it will shimmer into life, with a big AOC logo glowing proudly. Typically, the I1601FWUX takes about 3-5 seconds to power up, so not long at all. 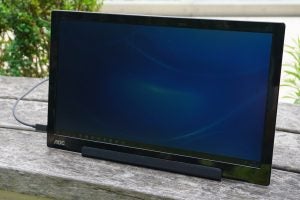 The 15.6-inch screen of the I1601FWUX is an IPS (in-plane switching) type, and as you’d expect from a monitor using this technology, viewing angles — on paper, 160 degrees at both orientations — are great. There was only mild greying and discolouration at extreme angles, which is fine. If you really wanted to work with the I1601FWUX at 90 degrees to your laptop, you could…

Using our colorimeter, we tested the I1601FWUX at its default brightness level of 70/100. Colour temperature was around 6931K, so a little over the 6500K ideal. At no point did the I1601FWUX look particularly cool, though.

Contrast ratio is 565:1, which isn’t ideal. Generally, a decent level of contrast for an IPS monitor is anything close to 1000:1 or higher, so this is way off the mark. This is particularly noticeable when watching videos where there’s plenty of dark areas or high levels of contrast – live music videos being a good example. As we said above, you can get around this somewhat by upping contrast and overdrive, but it still isn’t perfect.

Recorded sRGB coverage was 53.80% – again, not even close to good. A decent monitor will reach around 75% of the sRGB colour gamut in tests and, ideally, will exceed 80%.

For these reasons, you won’t want to use the I1601FWUX for any heavy photo or video editing. But, assuming you’re working with a laptop that’s powerful enough to competently handle something like Adobe Premiere Pro anyway, your device will (hopefully) come with a decent screen.

In that instance, the I1601FWUX comes into its own if you relegate tasks such as email and word processing to that screen and reserve all your heavy-duty stuff for your primary display. 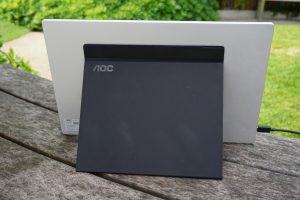 With a response time of 5ms, things are generally as smooth as you’d need them to be and video is easy on the eyes.

For everyday tasks such as word processing, checking emails and browsing the web, the I1601FWUX is more than good. It’s very handy to be able to quickly shunt new Chrome tabs over to a separate window. But despite the Full HD resolution, great viewing angles, and the fact that it’s easy to move around on your desk, at 100% resolution text is a little hard to peer at.

Even with the screen less than a foot away from my face, I felt like I was back at the opticians, being asked to read the lowest set of characters. The I1601FWUX is set to 150% scale by default, but for most of the time I had it set to 125%. This gave me more than enough room for work space, and I didn’t need to crack out a magnifying glass to read my emails.

Despite the sub-average contrast levels, YouTube and BBC iPlayer content actually looked okay on the I1601FWUX. While this is primarily a work device, we appreciate that ‘work’ often entails waiting for colleagues and contacts (especially if they’re based in other time zones) to get back to you. 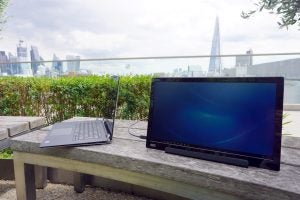 Downsides include its low contrast and colour gamut, and hard-to-reach settings – but for that price, you can’t expect miracles.

It’s great value for money for workers who need something they can sling into their bag at a moment’s notice. Just make sure you’ve invested in a laptop bag with plenty of padding.