The AOC C3583FQ is a huge, curved monitor that’s designed to be the perfect addition to high-end gaming rigs, thanks to its ultra-wide aspect ratio, 160Hz refresh rate and adaptive sync technology.

Unlike the Philips BDM3490UC, though, its 2,560 x 1,080 resolution is quite low for such a large screen. As a result, it’s likely to appeal only to those wanting a display primarily for gaming and watching video; the resolution isn’t ideal for working.

However, this is the sort of compromise you’d expect of a 160Hz curved panel of such proportions that costs only £499.99.

This is a decent-looking monitor, although the cutbacks to hit its relatively low price are immediately evident. The entire shell is made of plastic: the brushed metal-effect base and even what looks like a shiny chrome stand are plastic rather than the polished solid metal used on the Philips BDM3490UC.

Also lacking in comparison to the Philips is the edge-to-edge display. Where Philips’ panel sports a flat, slim bezel, on the AOC it’s 15mm wide, with a pronounced step up from the surface of the screen. Such a bezel is still perfectly common and acceptable, but it’s another area where the design of this display trails some competitors. 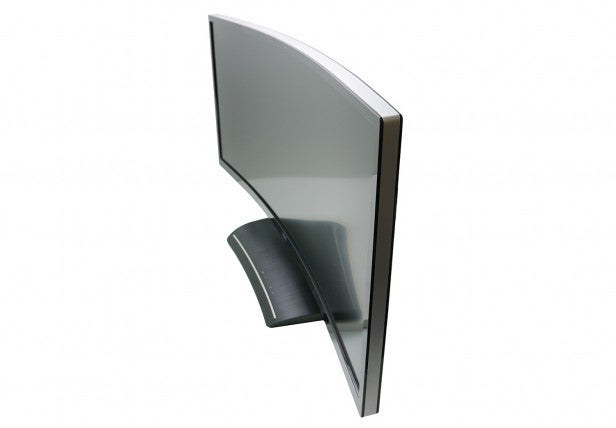 That thicker bezel along with the slightly large screen size mean this display is fairly wide too, with dimensions of 845mm x 460mm x 200mm. This compares to 826 x 479 x 220mm of the Philips.

Perhaps more significant is the fact that the extra width doesn’t come with extra height. And given that this display lacks height adjustment, the net result is that it sits rather low – I needed a couple of thick books to get it to a comfortable height.

This is particularly important, since to get the benefit of the curved screen you need it to be pointing directly at you. You can achieve this by tilting the display, so you’re looking down on it, but ideally you should be looking straight ahead.

The AOC is also lacking a VESA mount with which to affix the C3483FQ to an alternative stand or monitor arm.

On the plus side, AOC’s decision to incorporate two speakers into the back of the display, with only two small perforated ovals to break up the glossy plastic, result in a overall look that’s clean and simple. 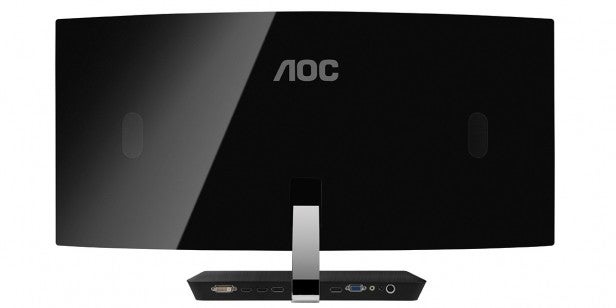 Overall, I’m a fan of the way the connectivity is integrated into the base. As a result, there are no dangling cables to mess up the clean lines of the rear of the display – they can just run straight backwards and off the desk.

However, you have to be careful when lifting or moving the display that you don’t leave anything plugged in: since the plugs almost touch the desk, they could easily be damaged.

Connectivity options are generous. They include two HDMI ports and two DisplayPorts, as well as DVI and VGA; the latter two are almost unheard of on a gaming display these days. You also get a headphone output and an audio input (for VGA and DVI – audio from HDMI and DisplayPort is routed automatically). On the flipside there are no USB ports, so you can’t use the AOC as a convenient USB hub. 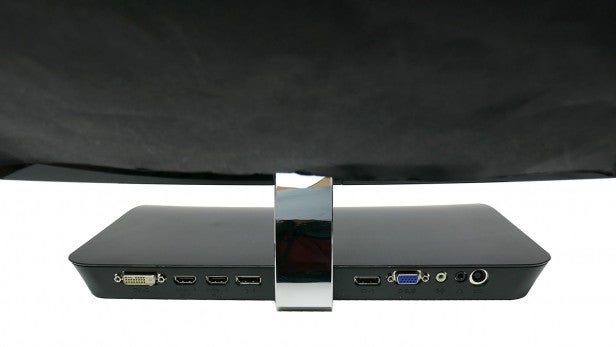 The AOC’s controls are arranged along the front of the base. They’re touch-sensitive, and are fairly discreet as a result. However, it does make them a tad difficult to use, especially given that the on-screen display they control puts them out of eye line, making it all too easy to hit the wrong button when navigating the menus.

Finally to the display at the heart of this beast. It measures 35in from corner to corner, uses an ultra-wide 21:9 aspect ratio and, of course, has a gentle curve to it. The combination makes for quite an imposing and vision-filling experience. In one display it’s possible to achieve the surround feel of using three smaller, flat panels – but without the annoyance of bezels.

Combined with a high-speed MVA LCD panel that can run at 160Hz – compared to standard 60Hz monitors – and support for adaptive sync (compatible with FreeSync) and you have quite the gaming screen. Adaptive sync technology ensures you get the best image quality in games by eliminating image tearing and stuttering.

This monitor certainly doesn’t lack for cables and other accessories, so you’ll be able to get up and running right out of the box. You get a DisplayPort cable, a VGA cable, a power cable with a UK plug – and one with a European plug – as well as a stereo 3.5mm jack audio cable.

The power supply is a mid-cable brick rather than being incorporated into the display itself, so you’ll have to find somewhere to hide this away. Otherwise, physical setup is a cinch. 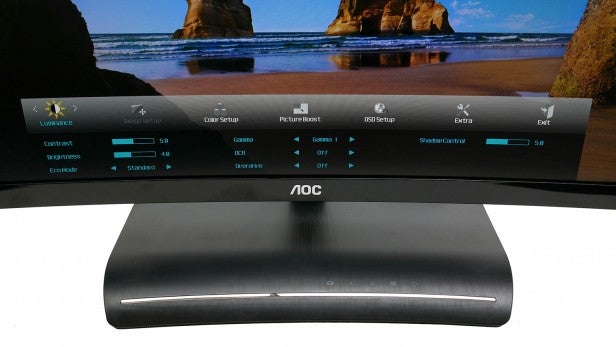 Despite looking a touch less premium than some other large, curved displays, the stand is perfectly sturdy and the position of the connections on the rear of the base really is convenient. You get just enough tilt to dial in the right angle and the tilt mechanism is fairly smooth and sturdy.

However, switching inputs and setting up the display using the OSD isn’t the simplest. As mentioned previously, it’s all too easy to hit the wrong touch button by mistake. Plus, what’s shown on-screen doesn’t align with the buttons, so there’s no visual feedback for what’s going on.

You’ll get there in the end, and there are plenty of options on offer, but it certainly isn’t hassle-free.

In addition, I’ve never been a fan of monitors that turn off their brightness control when switched to sRGB mode.