The AOC G24G1 is one of the smallest and most affordable gaming monitors that I’ve recently seen. You don’t find many gaming screens that cost less than £200, but this panel manages it – and it keeps the price low while including 144Hz AMD FreeSync and a solid range of features elsewhere.

The AOC’s headline feature is AMD FreeSync, is a welcome addition. For those out of the know, AMD FreeSync technology synchronises the graphics card’s output to the monitor’s refresh rate. That means you get butter-smooth framerates, with slick gameplay that has no tearing or stuttering. 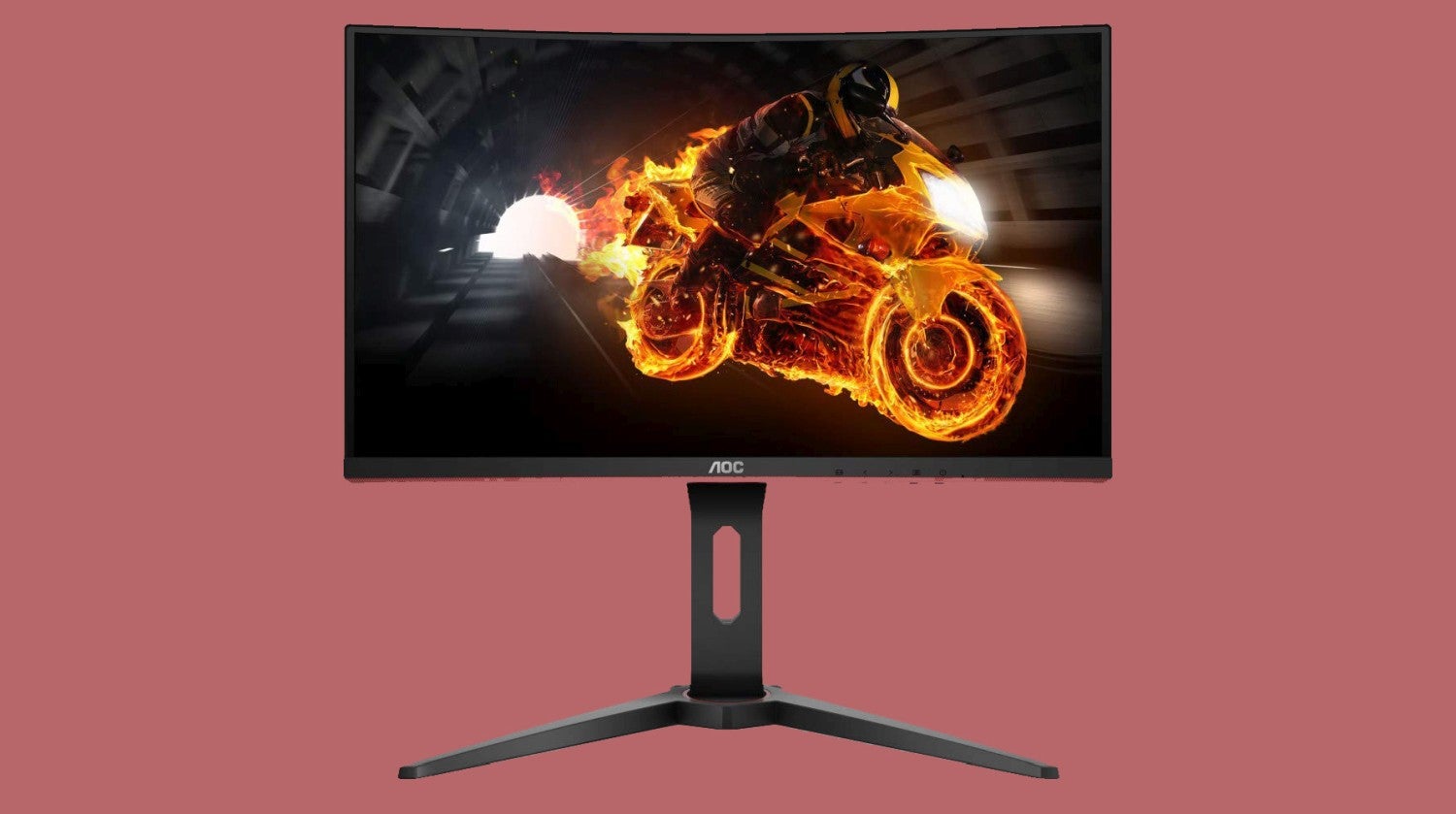 The AOC’s peak refresh rate means that games can be synchronised at a peak of 144 fps. That’s enough to make any top title or esports game run smoothly.

On paper, AMD FreeSync is excellent, however, this technology comes with caveats. It only works if you have an AMD graphics card – if you’re using Nvidia, the screen will run at a peak refresh rate of 144Hz, but it won’t be synchronised with the GPU. That’s restrictive when most of the market is dominated by Nvidia cards.

And, if you do have an AMD graphics card, it’ll need to be powerful enough to run games beyond 100 fps in order to get the most out of the screen – you’ll get better results the closer you get to 144 fps. If you want to use FreeSync with esports titles, that’ll be easy. But, if you want to sync up a more demanding triple-A title then you’ll need a card with more grunt.

FreeSync certainly has its pros and cons, but the AOC C24G1 isn’t alone when it comes to using AMD’s technology. It’s more commonly found on cheaper monitors because there’s not a licensing cost to install it – unlike Nvidia G-Sync. The AOC’s biggest gaming rival is the ViewSonic XG2401, which costs £195. It also has AMD FreeSync and a 144Hz refresh rate. 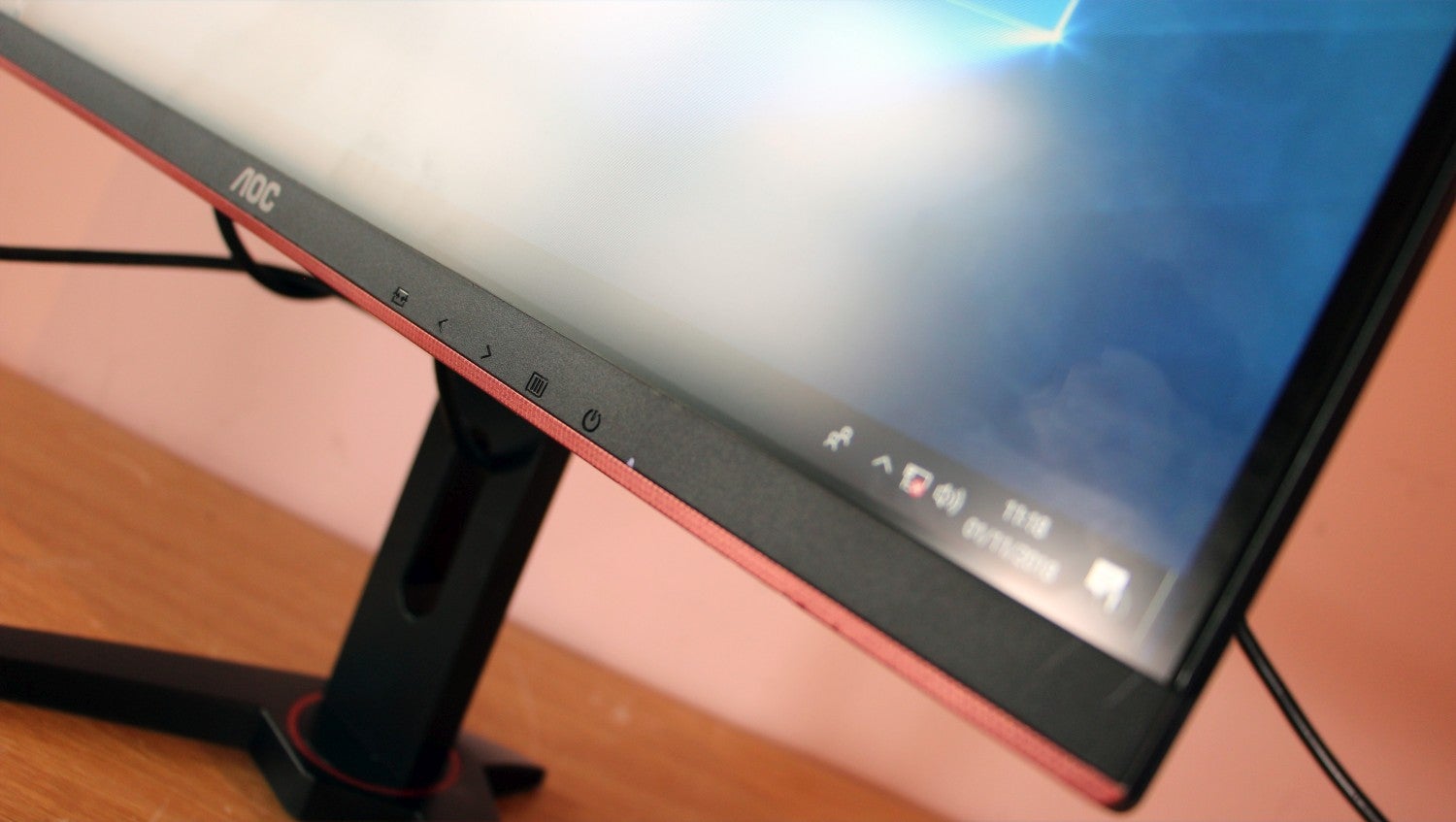 The competing ViewSonic panel also has a 1080p resolution and a 24-inch diagonal, so it has the same level of detail. However, the AOC and ViewSonic panels are both affordable, and so it’s easy to get more detail or space if you want. A 27-inch Full HD panel will cost just as much, and you’ll only have to spend less than £50 more to get 24-inch or 27-inch screens with higher resolutions or FreeSync included.

The C24G1’s 24-inch panel is curved, but the AOC doesn’t use the 1800R radius that is most common on these screens. Instead, the AOC has a 1500R radius. That makes a little tighter than the curve you’d get on a conventional panel, but that does make sense here – after all, it’s quite a small screen, and a tighter radius mimics the sort of immersion you get on larger 1800R panels.

The AOC pairs its tighter curved design with a slim bezel. That makes it easy to slot these small screens together in a multi-screen setup.

The slim bezel is paired with solid design elsewhere. The base is made of angular, wide feet, and the panel is built using matte black plastic – no surprise considering the AOC’s low price. The base, the bottom of the screen itself and the rear are all accented with red.

It looks just as good as the ViewSonic, which also used black and red. We’d also argue that the AOC’s slimmer stand is more useful because it keeps more space free on your desk.

On the inside, the AOC uses vertical alignment (VA) technology. That’s by far the most popular panel technology for gaming monitors at the moment – especially those at lower prices, or those designed for esports. There are good reasons why VA is the current hardware of choice: the panels tend to offer good colour quality and impressive contrast ratios alongside solid response times, which makes them a good middle ground for gaming.

The VA panel inside the AOC uses 8-bit technology. That means you get 16.7 million colours rather than the 1.07 billion included on 10-bit panels, but that’s not really an issue here – only those using screens for work really benefit from 10-bit, so gamers won’t notice the difference. More importantly, the AOC has a 1ms response time, which is perfect for gaming – and just as fast as anything else on the market. If you’re playing twitchy FPS games or frantic esports titles, that’s superb. 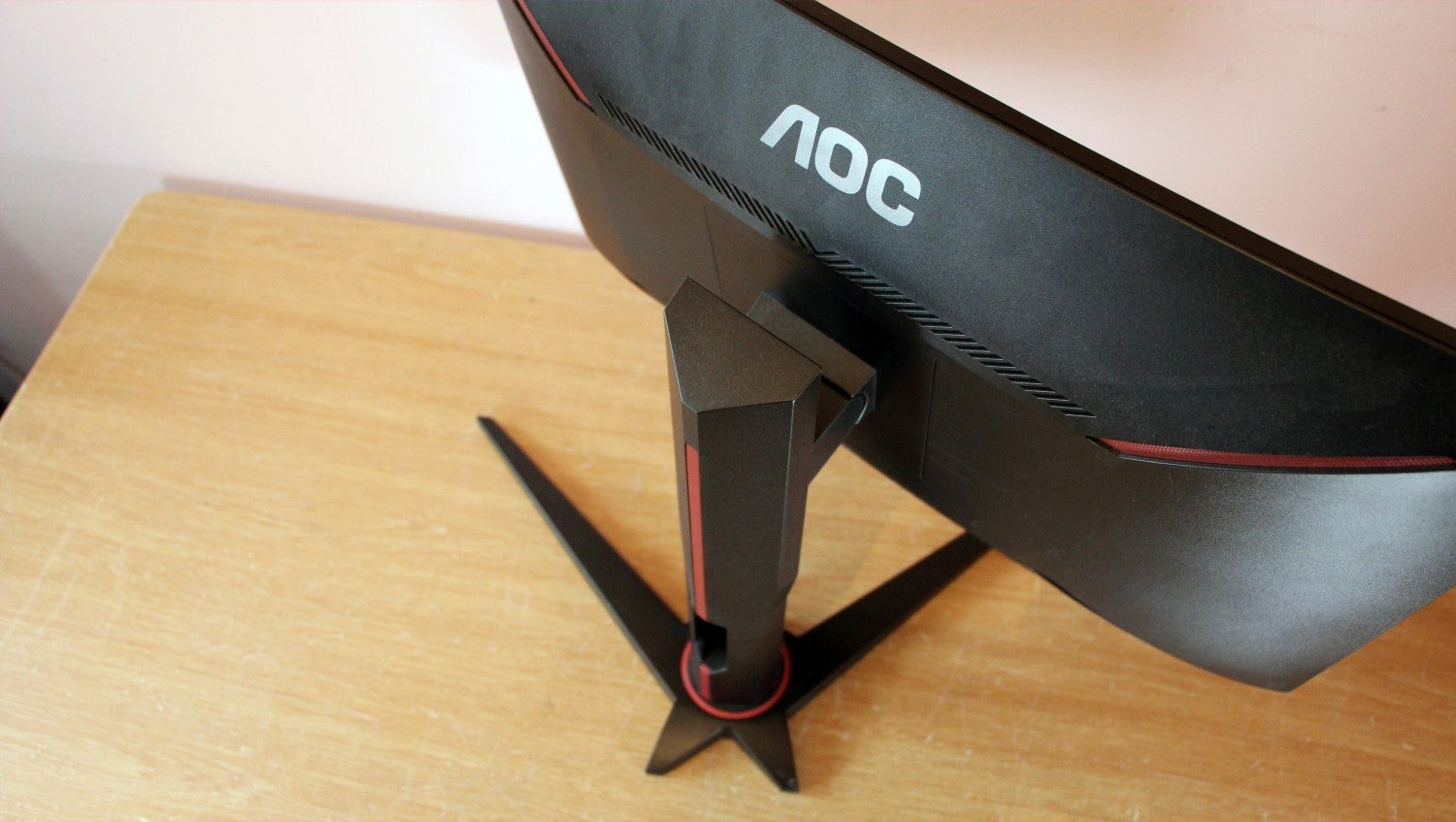 The monitor mixes black and red in its design

The ViewSonic XG2401 uses TN technology rather than VA. TN screens also tend to offer great refresh rates and response times – and in these areas, the ViewSonic does match the AOC. However, they can suffer with colour quality.

The AOC’s other significant rival is actually another home-grown screen. The AOC X24P1 isn’t a gaming screen – instead, it’s designed for general-purpose use. That means it has an IPS panel that’ll deliver better colours than the C24G1 – but potentially poorer response times and refresh rates. The specifications bear that out: the X24P1 only has a 4ms response time and a 60Hz refresh rate.

The AOC’s most interesting features are its curved design and its AMD FreeSync technology. The curve is tighter than the radius that’s usually found on curved screens, which means immersion is maintained across the AOC’s smaller diagonal.

That’s good, but AMD FreeSync is a mixed bag – it has a high refresh rate and works well, but you need to have a less-common AMD graphics card to take advantage of this feature.

The C24G1 is easy to put together. The base attaches to the stand with one pre-installed screw, and the stand snaps into the back of the screen without any screws at all – and it can be removed by pressing one button.

The AOC offers reasonable adjustment options, too. The base can swivel from side-to-side, and tilt forwards and backwards. There’s a 100mm VESA mount. The ViewSonic is very similar, albeit with  added height adjustment – it’s not included on this AOC, presumably because it’s so small.

AOC’s screen has two HDMI 1.4 ports, a DisplayPort 1.2 connection and a D-SUB input. Those connections exactly match the ViewSonic’s. 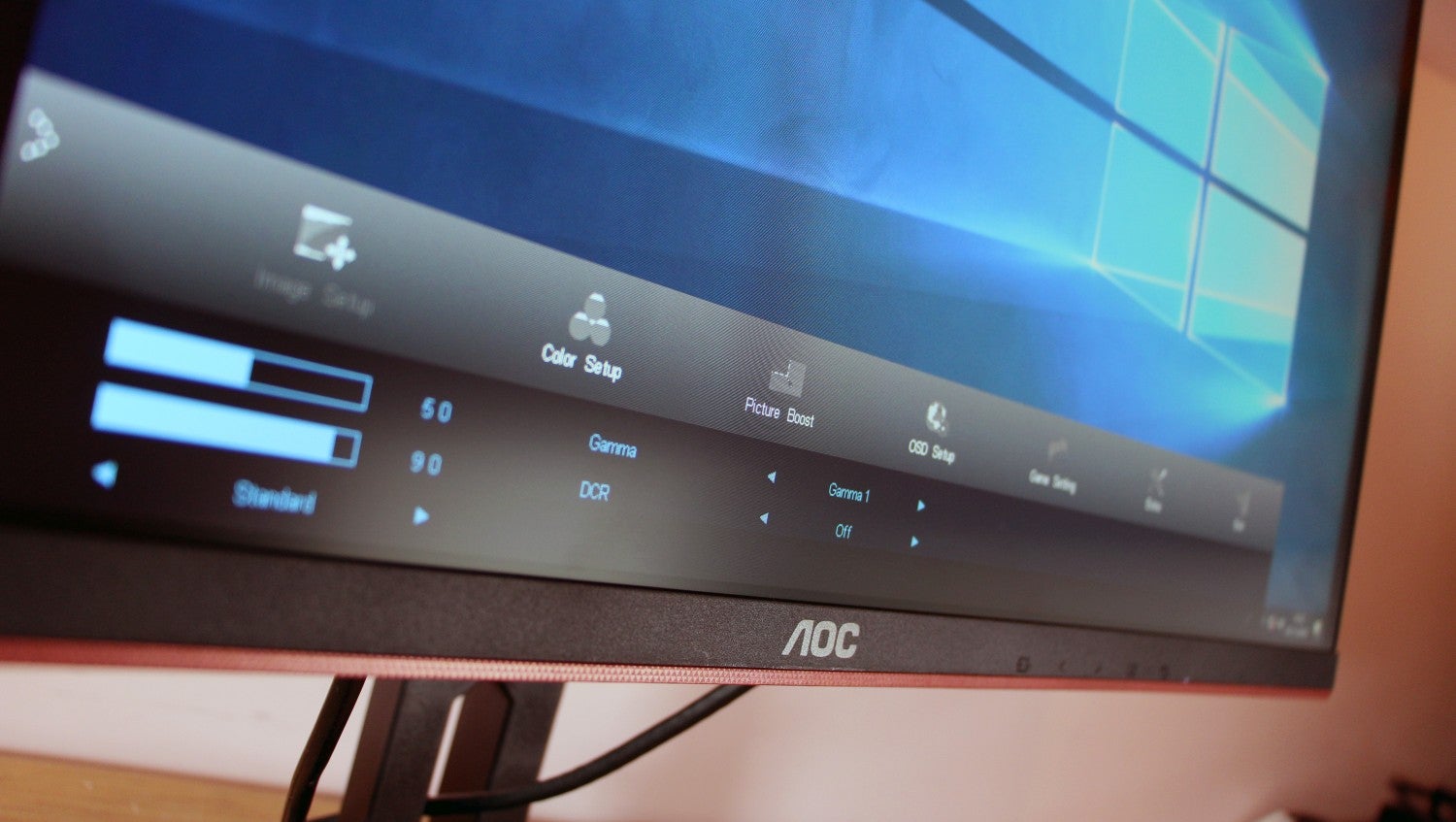 The OSD is wide, bright and accessible

The C24G1 doesn’t have much elsewhere, though. You get a headphone jack, but nothing else – while the ViewSonic has two USB ports and in-built speakers. The AOC X24P1 has speakers and four USB ports.

The AOC is light, at least, which makes it easier to use on a day-to-day basis. It weighs just 4.5kg – two kilos less than the ViewSonic.

The on-screen display is navigated by a row of buttons on the screen’s lower bezel, and the OSD itself takes up most of the bottom of the screen. It’s a conventional menu system with all of the usual options including screen modes, manual colour adjustment and the option to add an FPS counter to the screen.

However, it’s extremely slow to navigate and it takes up more space than most other on-screen displays. It’s not a huge issue because most users won’t often delve into this menu, but the OSD is only middling.

The AOC monitor delivers good levels of contrast and brightness, but it falls behind its rivals in other key areas.

Its brightness measurement of 260 nits is excellent – ample for any sort of gaming situation. That’s paired with a black level of 0.07 nits. That’s another great figure, and it delivers black shades that are deeper and more absorbing than any rival.

Contrast is better too: at factory settings the AOC delivers a contrast of 3714:1. You’ll get stonking vibrancy across the entire range, with punchy colours in the middle, deep black tones and blaring brighter shades. 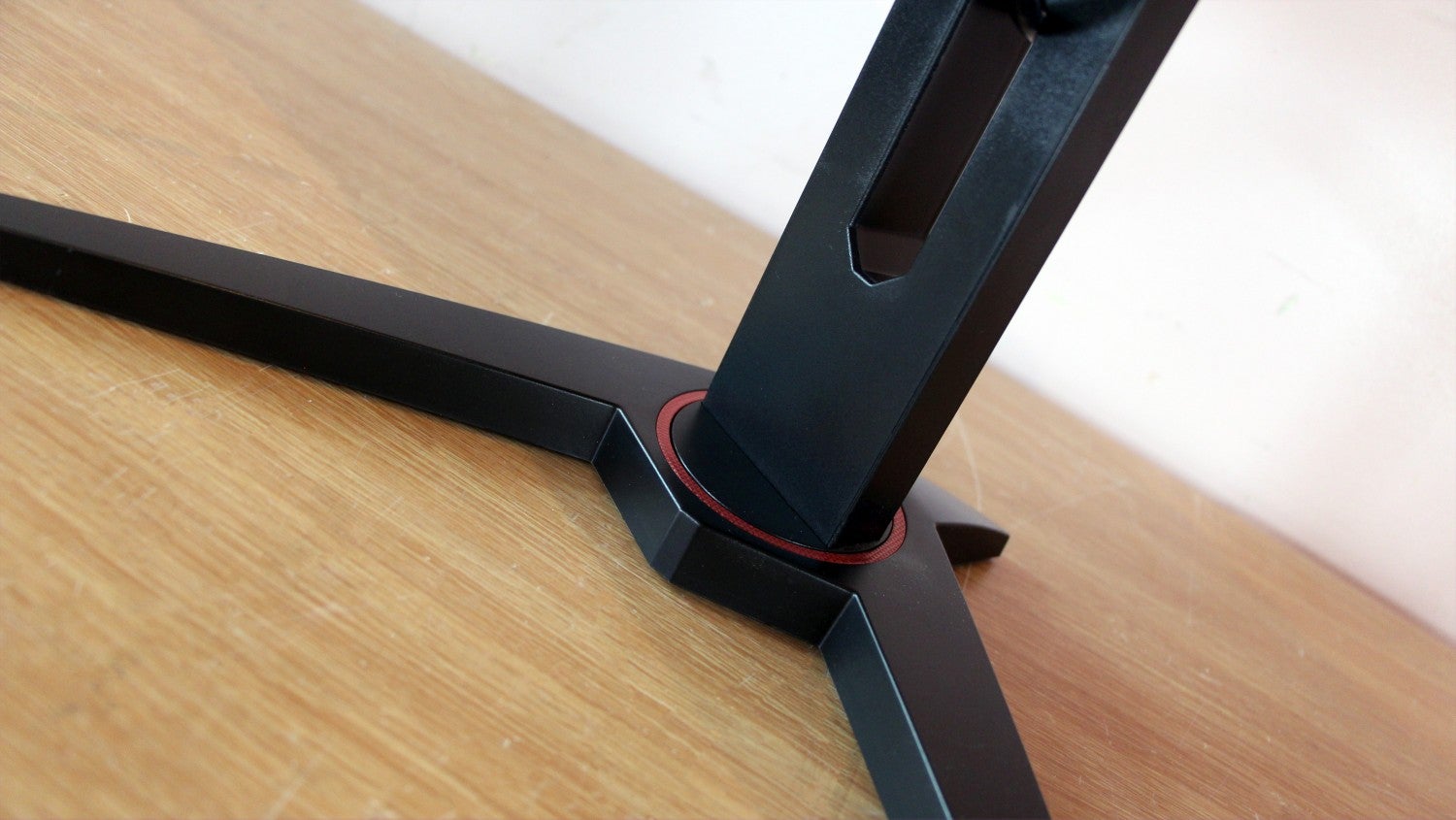 The stand can swivel from side to side

The ViewSonic and AOC X24P1 returned contrast figures of 955:1 and 950:1. They’re fine results that won’t impede gaming, but the C24G1 is clearly far better here.

Sadly, this is the only area where the C24G1 takes a convincing lead. Its colour temperature of 7304K is on the cold side, and a long way from the 6500K ideal figure. That makes images look pallid and washed-out – fine for gritty games, perhaps, but not ideal when you want games and films to look as good as their developers intended.

Both of these other options are better in this regard. The ViewSonic served up a near-perfect colour temperature of 6531K, and the IPS-based AOC X24P1 sat at a solid 6821K. 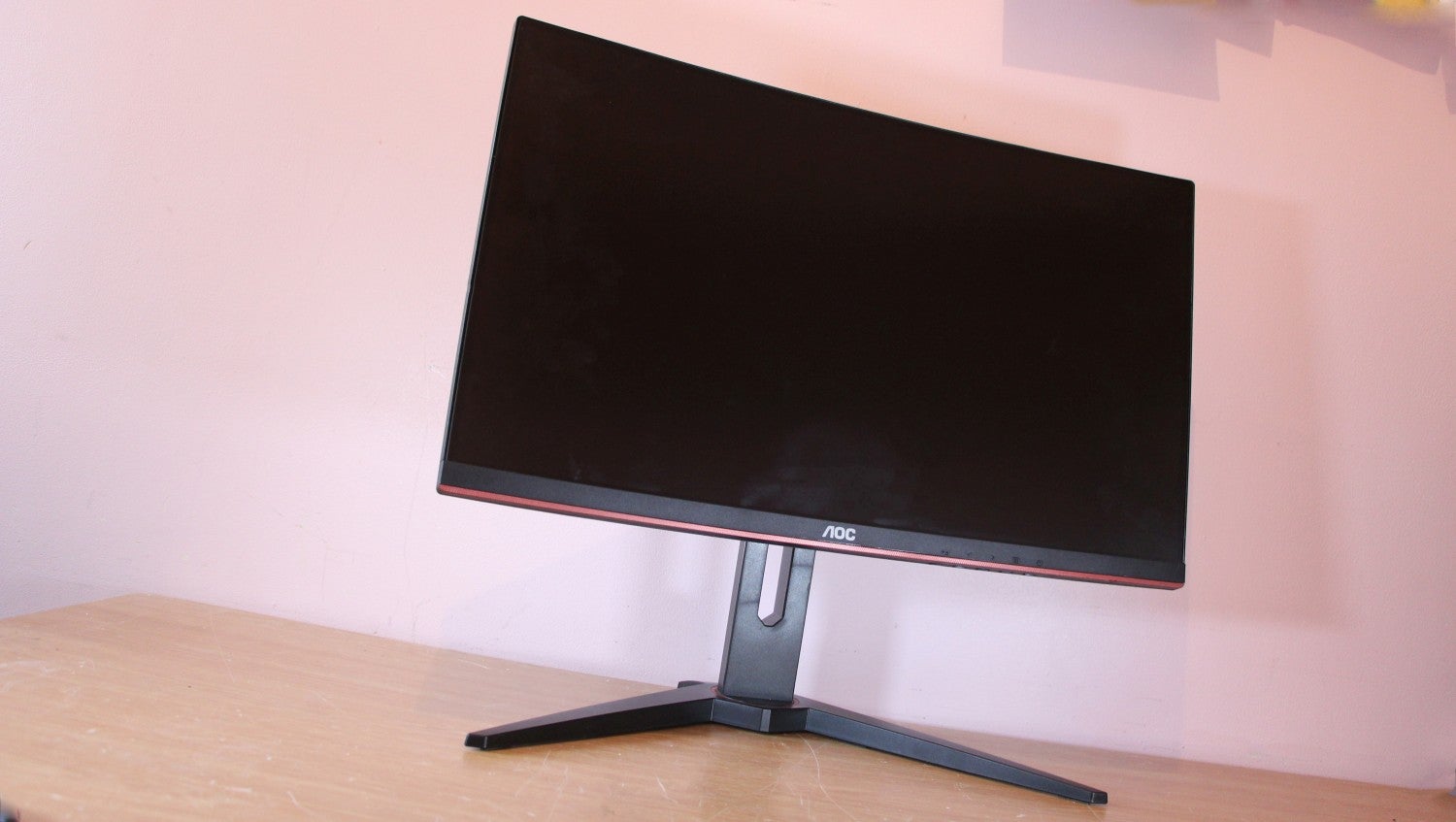 The AOC also suffers with mediocre uniformity. Along the top edge the panel gained about 4% of its brightness – but at the bottom corners the AOC lost 14% of its backlight strength. That’s a high figure, and worse than the ViewSonic – so you may see some image variation, especially if you’re playing games where the screen doesn’t change too much.

The AOC’s screen modes aren’t much cop either, but that’s hardly a surprise. The FPS mode ramped the colour temperature up to a chilly 9681K, which made the screen look blue – while making the contrast and Delta E worse. Racing mode had even poorer colour temperature and Delta E results, while the RTS option was no better. We wouldn’t use any of these options.

If you do want to use this screen for competitive esports, though, be assured that the input lag is minimal. The AOC averaged 11.3ms – easily under the 20ms barrier where most human eyes can’t notice a difference.

The AOC C24G1 has a solid set of features considering its price, but the budget clearly runs out when it comes to image quality.

The inclusion of AMD FreeSync matches rivals and is welcome if you have an AMD graphics card, and the curved design increases immersion when compared to the flat ViewSonic. Input lag is fine, there are loads of adjustment options, and the C24G1 certainly looks the part.

The AOC’s VA technology delivers stunning contrast that outstrips rivals, but those good figures are hindered by colour accuracy, temperature and uniformity that’s worse than rivals. You also miss out on speakers and USB ports with this screen.

The AOC C24G1 is a solid option if you’re after a small, curved screen with AMD FreeSync – so it’s particularly good for fast-paced games or esports. However, look elsewhere if you prize image quality or other features: the ViewSonic XG2401 isn’t curved but it is a better all-round gaming screen, and the AOC X24P1 is a better option for general purpose use.

The AOC C24G1 has a solid set of features thanks to AMD FreeSync, a curved design and plenty of movement options. It’s also got fantastic contrast and deep black levels. However, its colour accuracy and uniformity levels are poor – so this monitor is only worth investigating if you prize its features and fast response times over image quality.