Introduction
Anthem is a Canadian AV brand that specialises in high-end, performance-driven power amps, processors and AV receivers, and is distributed in the UK by the same company that brought us the brilliant Paradigm Cinema CT 100 speaker system (Anthem AV Solutions).

On test here is the Anthem MRX 300, an entry-level AV receiver aimed at a more mainstream market, but when an entry-level product comes with a price tag of over £1,000, you know you’re still deep in high-end territory.

The Anthem MRX 300 is very much aimed at enthusiasts, not only because of its focus on performance but also because it’s bundled with more advanced calibration software than you’d normally expect to find with an AV receiver.

On the downside, it eschews frills like networking functionality, internet radio and USB music playback (the last two are reserved for the step-up MRX 500 and MRX 700, £1,599 and £2,099 respectively) but still has a decent-looking spec, with 7 x 80W of power, decoding for all the major audio formats, 3D support and a whole host of listening modes.

Anthem MRX 300 Design
What you also get for the money is impressive build quality. Lifting it from the box you can feel the heft and solidity of the metal bodywork, while the thick brushed aluminium front panel and firm controls add to the overall sturdiness.

The front panel is busy, with controls dotted all over the place, including a direction pad for controlling menus, direct input selection keys and a chunky volume dial. There’s also a large display panel that by default gives volume, source and format in large blue letters, but can be used to view the setup menus too. Towards the bottom is a recess that runs the width of the front panel, which houses composite and analogue stereo inputs, plus a headphone jack – all covered by a sliding panel. The lack of front digital inputs or HDMIs is a bit of a shame.

Design wise it’s more esoteric than most mainstream amps, utilitarian some might say. Its straight lines and front panel that overhangs the sides – hinting at the fact that it can be rack-mounted with an optional kit – mark it out as a serious-looking receiver aimed at enthusiasts. It’s not exactly pretty then, but its tasteful black finish means it stops short of eyesore status.

Anthem MRX 300 Connectivity
The rear panel doesn’t quite offer the all-encompassing selection of sockets you might expect for the money. There are no multichannel audio inputs, and you’ll only find four HDMI v1.4 inputs, which is fewer than most similarly-priced Japanese models. The single output won’t please those who want to feed two displays simultaneously either, but to be honest most users will be more than happy with what’s on offer.

Elsewhere there are five digital audio inputs (three optical, two coaxial) and two outputs (one of each type), six sets of analogue stereo inputs and two outputs, 7.1-channel pre-outs and zone 2 output. On the video side you get three sets of component video inputs and one output, plus three composite video inputs and three outputs. A 12V trigger, RS-232 and IR sockets have custom installation covered, while a radio antenna jack and an input for an optional iPod dock complete the line-up.

Anthem MRX 300 Features
The Anthem MRX 300’s most attractive feature is Anthem Room Correction (ARC), which calibrates the unit’s performance based on your room’s acoustic properties. What separates ARC from most other auto setup modes is that it’s not integrated into the receiver itself but runs separately on a PC.

Bundled in the box alongside the software CD-ROM are a microphone and stand, which are used to measure the acoustic properties of your listening room. Both the receiver and microphone have to be connected to USB ports on your PC – in the receiver’s case you have to use the RS-232 port, but if your PC lacks RS-232 then you’ll need a serial-to-USB adapter (Anthem provided us with a Keyspan). You also get a USB cable and extension cable in the box.

Before you get to the measuring bit, you have to set the speaker distances manually in the unit’s setup menu. You can also set the parameters you want ARC to measure, giving you a great deal of manual flexibility – including separate configurations for movies and music – but if you’re a complete novice then it can do everything for you.

Run the software and the receiver plays test tones from each speaker, which are picked up by the mic and measured. To make sure the sound is optimised no matter where you sit, you should take readings from various positions around the room – the minimum is five and the maximum is 10. 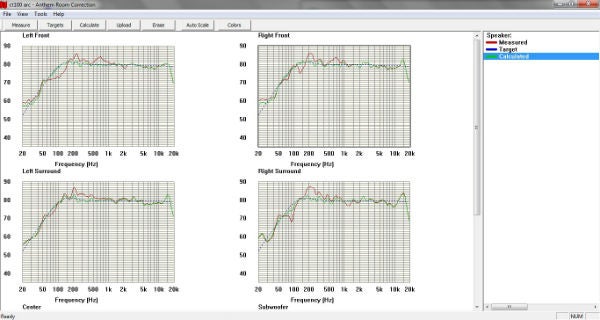 ARC then calculates the correct output levels, crossover frequencies and EQ, producing a series of graphs for each channel. These show the measured response (with all the troublesome peaks and dips), the target response and the calculated response after correction. These results are then uploaded to the receiver, and because they’re saved on your PC you can upload them again in the future if you need to.

It might all look a bit nerdy and complicated, but it’s not quite as impenetrable as it seems – and there’s a good chance you might not have to carry out the procedure yourself as Anthem recommends that its dealers install the receiver for you where possible.

Enthusiasts will no doubt love it, particularly because of the dramatic impact it can have on performance – do a before and after comparison and the improvements are obvious. And on a more basic level, getting all this extra hardware in the box feels like a real bonus, as it would no doubt cost a bomb to buy it all separately.

The Anthem MRX 300 offers video processing too, including upscaling to 1080p via HDMI, composite/component-to-HDMI video conversion and passthrough for 1080/24p and 3D signals.

A Quick Setup mode guides you through basic stuff like the connection type, output resolution and your speaker arrangement – including whether you have the sixth and seventh channels on surround back or Pro Logic IIz front height duties.

This user-friendly layout is a godsend because there is loads to tweak, offering amazing versatility for those with complicated systems. You can store parameters and listening modes for individual source inputs, as well as make detailed manual adjustments in the Speaker Configuration menu, including bass management, levels and distances (although if you’re using ARC you’ll only need to fiddle with the latter). There are far too many options to discuss here, but rest assured that the Anthem MRX 300 leaves no stone unturned.

In the box are two remotes – a larger main handset and a smaller one for use in a second zone. The main remote boasts a thoughtful layout, with clearly separated menu controls in the middle and labels spelled out in large capital letters. It’s easy to find frequently used stuff like source switching and volume control, and thanks to the built-in backlight it’s easy to use in the dark too. The smaller remote pares things down to the basics, with central menu controls, a cluster of input selection buttons and clearly marked volume keys.

Anthem MRX 300 Performance
It might be lacking in features, but the Anthem MRX 300 makes up for it with sensational sound quality. There are levels of refinement and raw power at play here that instantly justify the price tag – particularly with ARC working its magic.

Movie playback is breathtaking. The Anthem handles Super 8’s train crash scene in an exciting and aggressive manner without losing control as the huge train carriages start crashing into one another at full pelt. 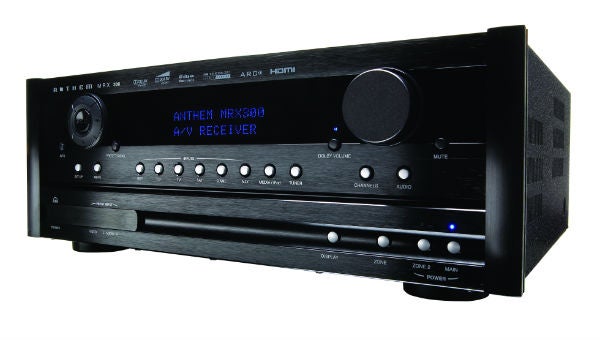 The sound is immersive thanks to the detailed atmosphere conjured up by the surround channels, while smooth steering guarantees everything sounds natural when effects pan from speaker to speaker.

Spot effects are fast and snappy, dialogue is clear and sudden dynamic shifts – like the moment when a flying metal door crashes to the ground and shatters the silence – happen in the blink of an eye.

The Anthem MRX 300 also musters immense power despite its modest 80W per channel rating, which Anthem claims is a more realistic measurement than its rivals normally quote. There’s plenty of puff to drive larger speakers, but it’s equally comfortable with compacts like the Paradigm Cinema 100 CT, which proves a match made in heaven.

It provides a room filling sound without cranking the volume too high, but when pushed it flat out refuses to distort. Bass is of the highest order too, making every gunshot or explosion punch right into your gut. ARC deserves a special mention here. After room correction, the sound is tighter and more focused, with less bass boom from the subwoofer that stops it overpowering the other speakers.

So the Anthem MRX 300 can be a beast, but there’s beauty here too. Its sound is open and transparent, twinkling with detail from every speaker. Such is its level of refinement that it can make you fall in love again with films you’ve seen a hundred times. It’s that good. 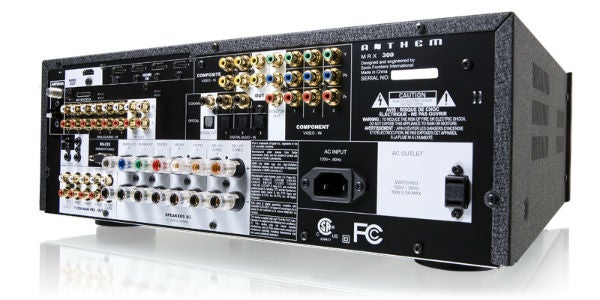 This poised sound works well with music too, a talent that sets the MRX 300 apart from many of its mainstream rivals. Lianne La Havas’ No Room For Doubt sounds particularly spine tingling, picking out all the nuance of the voices and the twang of guitar strings.

And sure enough it’s a wonderful performer, delivering a potent yet refined sound with lots of detail and visceral bass – helped along by the nigh-on miraculous effects of ARC, the superb room correction system. It’s for this reason that Anthem gets our recommendation despite its lack of eye-catching features.