What is the Anker Soundcore Flare?

The Anker Soundcore Flare is a portable speaker with a built-in light show.

You get a mini Philips Hue-style mood light and a surprisingly good wireless speaker for £69.99. Like many of Anker’s products, the Flare is a bargain.

The Jam Heavy Metal’s audio is a little smoother, and may be a better choice if your priority is sound quality. However, it just isn’t quite as much fun as the Flare. 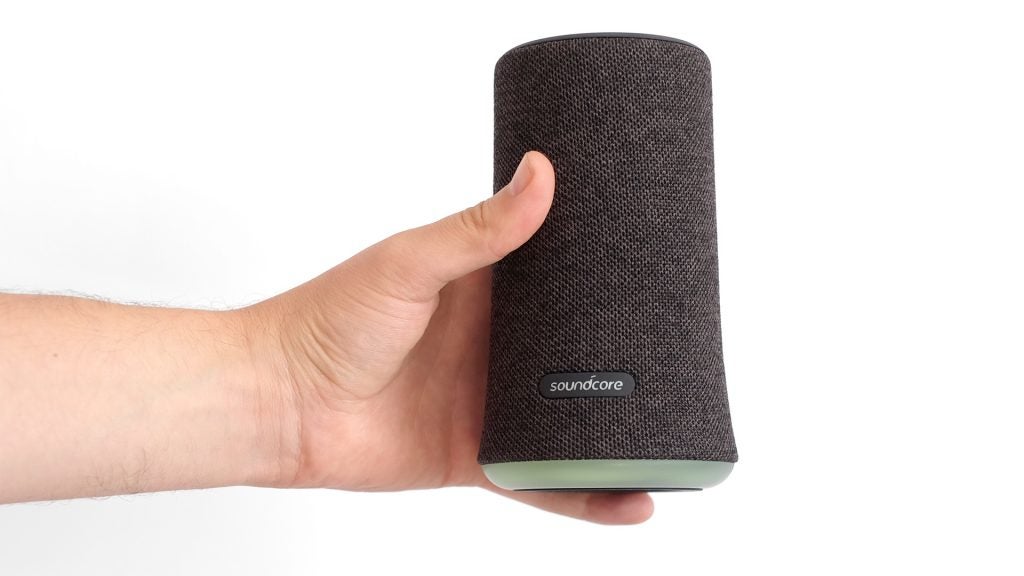 The Anker Soundcore Flare is a little tower speaker. It looks similar to the second-generation Amazon Echo, with a fabric grille around the front. It widens out at the bottom.

This is a completely different kind of speaker, however. It doesn’t connect directly to Amazon Alexa or Google Assistant. You’ll still need to plug in an Echo Dot if you want that kind of functionality.

The Anker Soundcore Flare is at heart a simple Bluetooth speaker. It’s battery-powered, just about small enough to fit into your hand luggage for a weekend away, and feels as well-made as one of Amazon’s smart speakers. 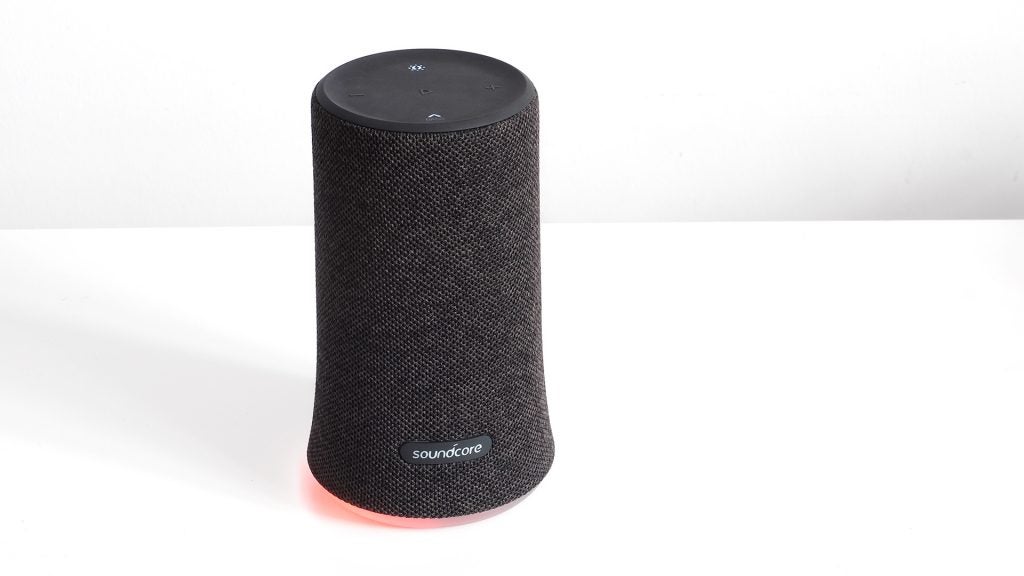 Its light bar is what draws the eye. The translucent base has multi-colour LEDs under its surface. Its light can react to music, or transition smoothly through colour tones.

The music-reactive mode might be right for the kids’ room, but for a more grown-up look you’ll probably want a subtler effect. Unlike a standalone smart light you can’t choose exact shades, but different profiles do let you restrict the colour palette somewhat, dim it or turn the lights off completely.

In action, the Anker Soundcore Flare looks like a relative of a Philips Hue or LIFX smart bulb, although the light is only here for a fun, visual effect. It’s unlikely to be used to light-up rooms, even on a bedside table, since it just isn’t bright enough.

Instead, it’s perfect for adding “chilled out vibes” to a bath or late-night reading. Or, yes, less chilled-out ones to a party. 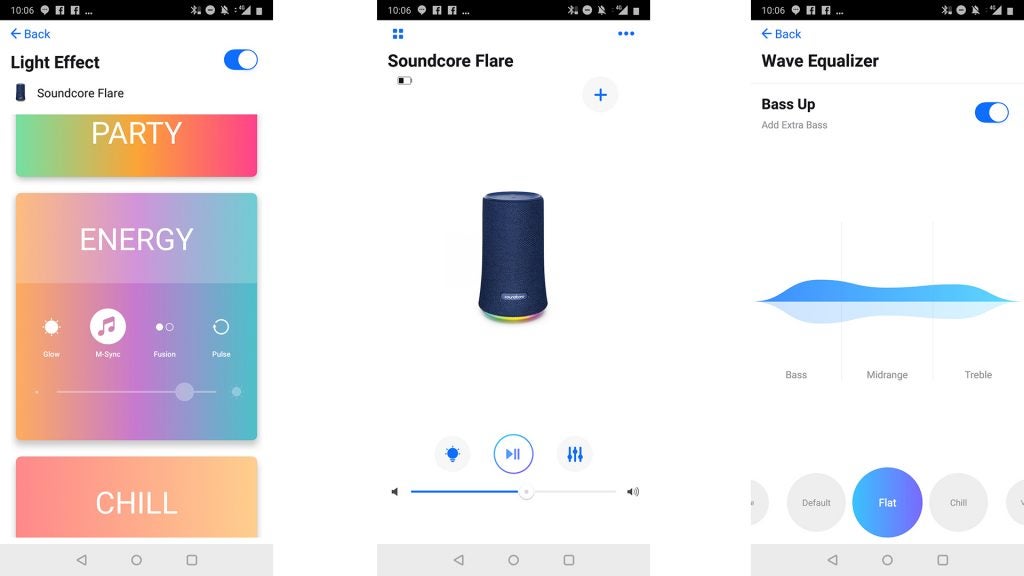 Soundcore app: ‘Glow’ cycles smoothly between colours; ‘M-Sync’ blinks hyperactively to the music; ‘Fusion’ is a much subtler reactive mode; and in ‘Pulse’ colours snake around the LED ring like an animated neon shop sign

There are two main LED zones on the bottom, and using the ‘M-Sync’ music mode, they pulse on and off to the beat. You alter the LED mode in the custom Soundcore app.

Judging by the usual standards of speaker apps, I half-expected this app to be a flaky, under-optimised mess. But it’s actually simple, well designed and reliable.

However, Anker really does need to add the ability to pick a single colour and stick to it. Hopefully, it will do so in an update. 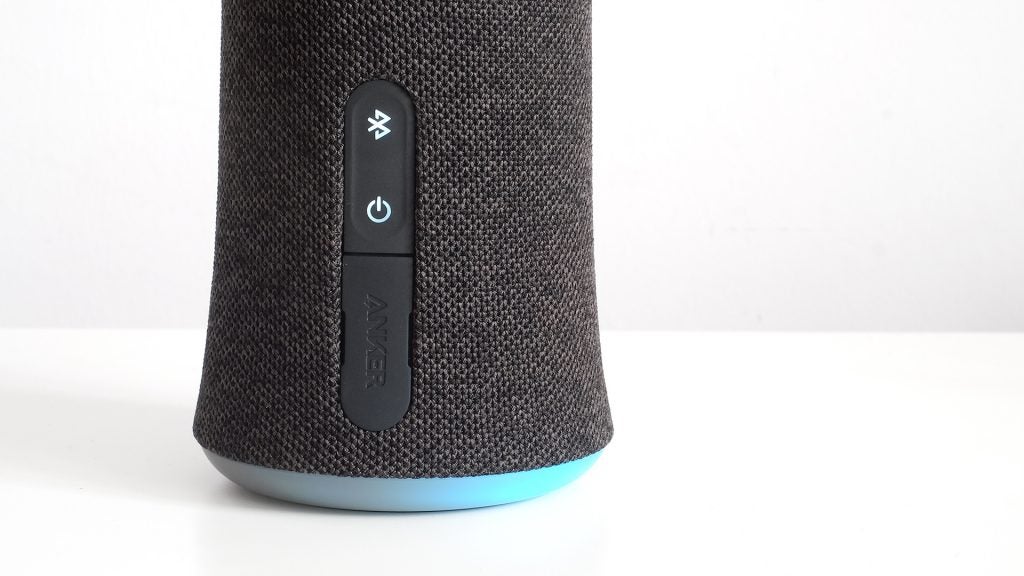 LED lights are likely to polarise, but the Anker Soundcore Flare’s are less abrasive than those of, for example, the Sony SRS-XB31. Sony’s style is more night club; Anker’s a living room glow.

The Anker Soundcore Flare doesn’t want to be kept indoors all its life. It’s rated to IPX7, meaning it will survive being submerged in 1 metre of water for up to 30 minutes. I gave it a rinse under the tap, which seems a likely outcome after taking the speaker to the park.

Its fabric grille does absorb a little water – more than rival Ultimate Ears speakers – but, sure enough, the Flare continued playing audio just fine. A few hours later, it was totally dry again.

You simply need to ensure the rubber flap over the micro-USB charge socket on the back is in place. This also covers a 3.5mm aux input, which lets you plug in an old MP3 player, laptop or Amazon Echo Dot. 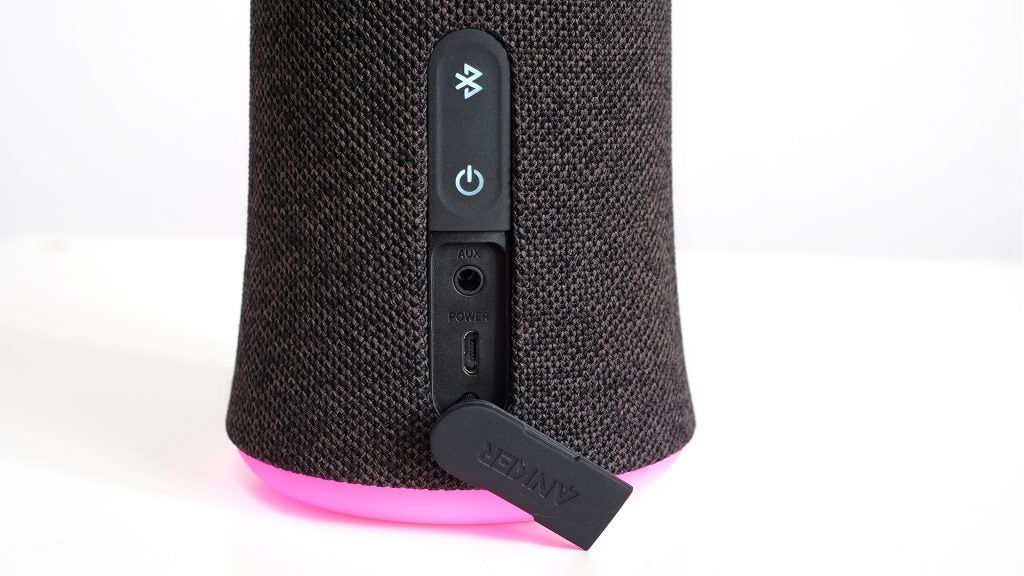 The Anker Soundcore Flare’s actual controls are all water-resistant as standard. Playback, volume and extra bass buttons are all built into the rubberised top, plus there are light-up Power and Bluetooth buttons on the back.

As with an Anker battery pack or pair of earphones, you’re likely attracted to the Flare’s relatively low price above other factors. But it actually has great features for a lower-cost speaker. It isn’t as stylish as some Ultimate Ears speakers, but it’s cheaper than the rival UE Boom 2, even after a big price drop. And that speaker doesn’t have lights. 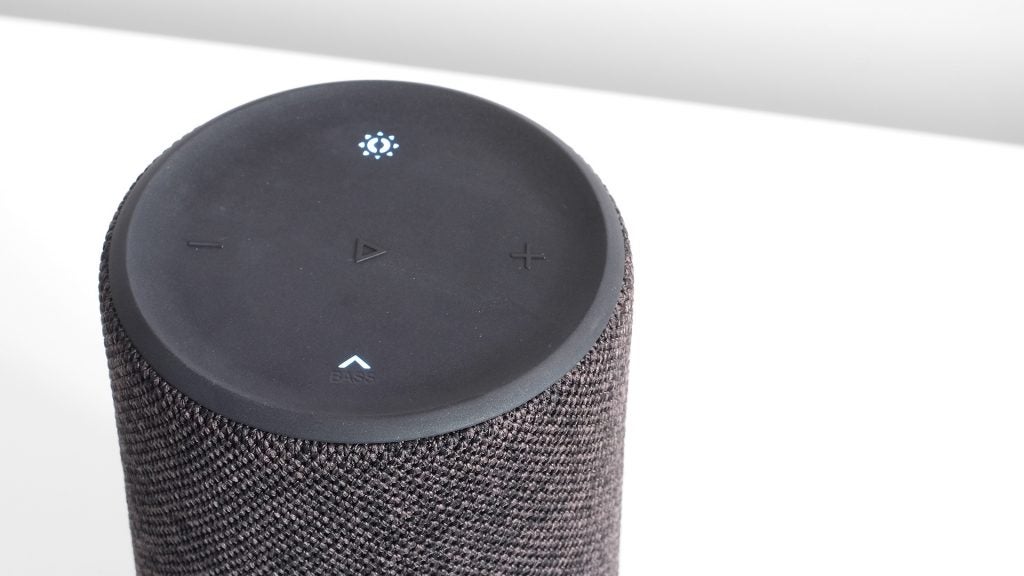 Anker says the Flare’s battery lasts up to 12 hours. At moderate to slightly high volume levels I’ve found its real-world stamina is closer to eight hours. Since LEDs usually use only a couple of watts of power, it seems this is more likely down to an optimistic battery estimate rather than a light show tax.

However, turning the Flare’s lights off will probably result in a slight lift. Charging takes 3.5 hours: there’s no fast charge here, and you’ll have to use your phone’s plug since you only get a cable in the box. 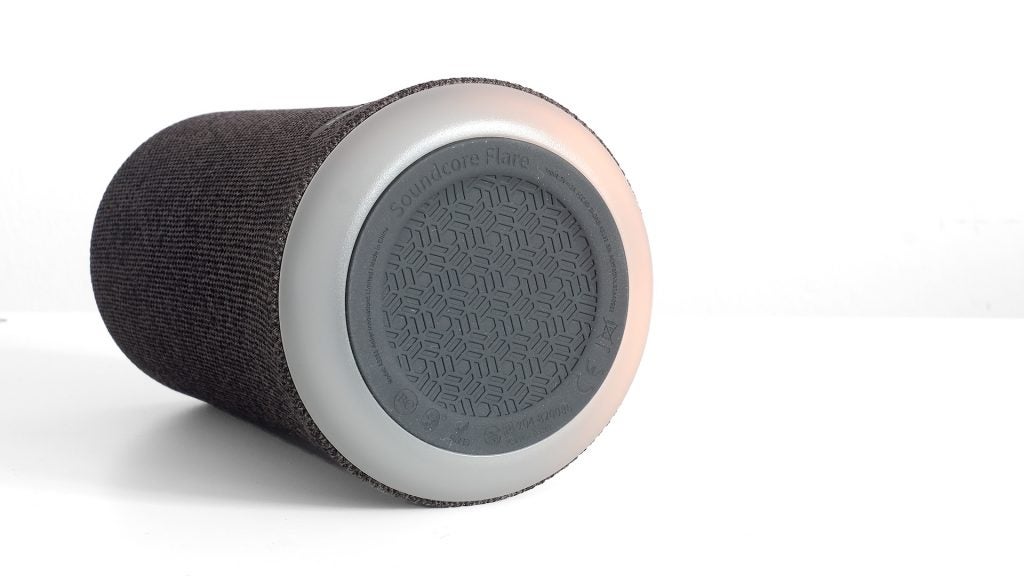 The Anker Soundcore Flare is one of the best-sounding portable speakers at the price. It doesn’t compare too badly to models in the £100-150 range, largely because it uses a similar driver style.

There are two active drivers and two passive radiators, resonant panels that let small speakers such as this output quite a bit of bass. The active drivers sit on each side, which gives the Flare its ‘360 degree’ sound – or, in practice, sound that doesn’t just come from the front.

This speaker has solid bass depth, decent detail and an all-round larger sound than you might hear from some of the smaller ‘smart’ speakers beginning to pop up. This is a perfect little speaker for the bedroom, kitchen or bathroom. Or, more likely, all of those places.

Passive radiators make the Flare worthwhile, boosting the sound quality closer to that of a miniature hi-fi. 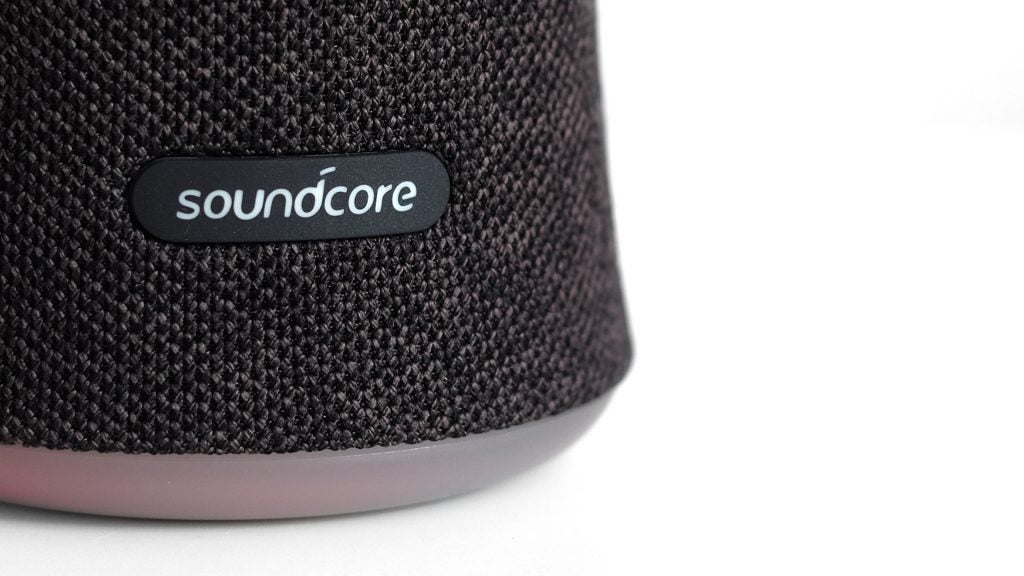 I’m impressed by how close it gets to the Jam Heavy Metal, the budget portable speaker I’ve recommended more often than any other over the past two years. It sounds good enough to make music engaging and dynamic, and may do the job for all your casual music listening, unless you’re quite picky.

You can also customise the sound a little. There’s a bass enhancer button on the top plate, although (unlike most extra bass modes) I just keep it on all the time since it also makes the sound richer and thicker.

Note that there are EQ modes in the app. The default mode purports to boost the treble and bass, but I find at most volumes it gets you good results, not a cartoonish or overblown bass response.

The Jam Heavy Metal is a little better in some respects, however. The Flare’s upper-mids and treble aren’t as smooth or quite as detailed, and it can leave the speaker sounding a little harsh at high volumes.

Since I use a Bluetooth speaker around the house for the most part, and aren’t too fussed about the Flare’s lights, I’ll continue to keep the Jam Heavy Metal close by. However, if you’ll use the Anker’s water-resistance or enjoy its light feature, this is one of the very best Bluetooth speakers at the price. 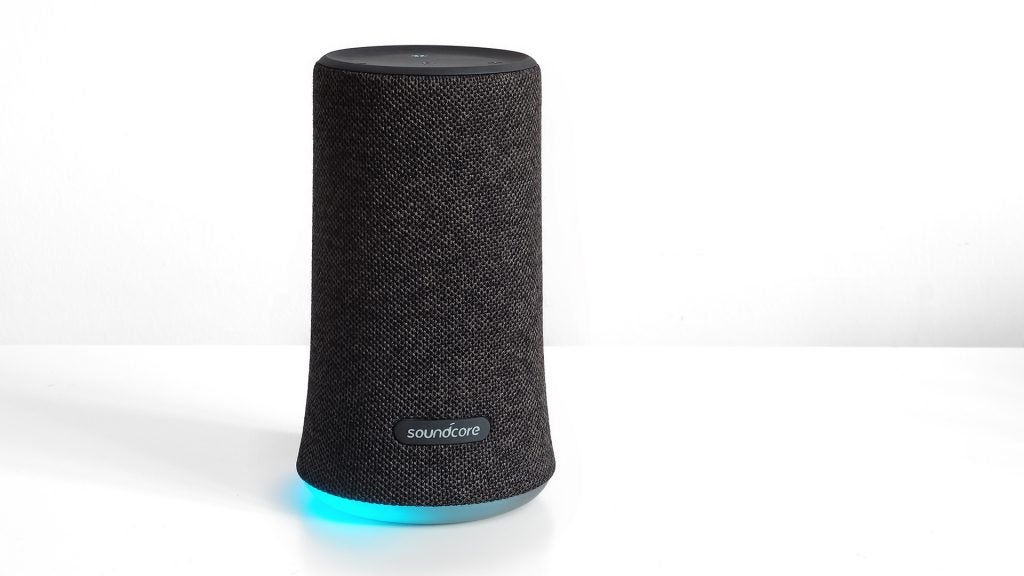 Why buy the Anker Soundcore Flare?

The Anker Soundcore Flare is an unusual little Bluetooth speaker with LED lights in its base that react to music. It sounds like a gimmick, and maybe it is, but in action it gets closer to the style of a smart light than Sony’s mobile disco take on the same idea.

Even if you don’t want the lights, the Flare is still a great buy. It sounds good, it’s water-resistant, and the price is just as alluring as that of Anker’s other gear.

At the price the Jam Heavy Metal beats it for sound, with smoother mids and treble. However, this one is better-suited to the outdoors. Or kids’ parties.

Value, great sound and a real fun side make the Flare worthy of consideration.