Angry Birds is no longer just a game, it’s now a full blown brand in its own right, just like Star Wars, so it’s no surprise that the two would eventually team up for a game, the aptly named Angry Birds Star Wars.

Right from the get go the trade mark Angry Birds humour comes to the fore as the standard classical rendition of the Star Wars theme over the title sequence fires up and then segues seamlessly into an oompah-band version. From there on in it just keeps getting better.

In terms of game play it’s essentially a mash up of the first Angry Birds game and Angry Birds Space, with added light sabres and laser blasters thrown in for good measure. 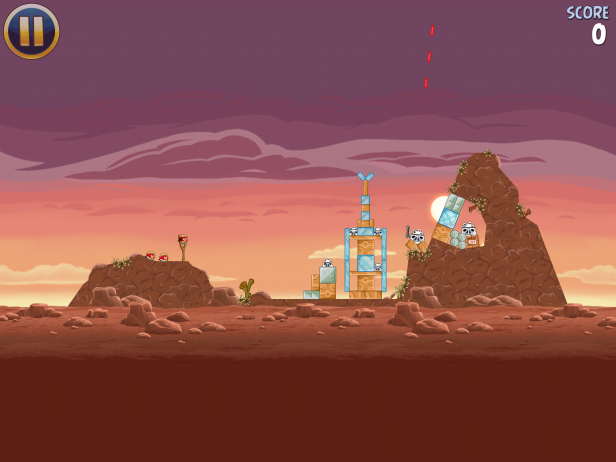 Naturally the old Angry Bird characters have been given a Star Wars make over and the background settings for each level are drawn from the Star Wars universe. Early levels focus on the bird flinging mechanics of the first Angry Bird game, before more Space like levels are added in.

And because these birds are now Star Wars characters they have extra powers. For example, the Skywalker bird gets a light sabre after a few levels on Tatooine, which you can wield mid-flight by tapping the screen after you’ve release him on his trajectory. Similarly, the Han Solo Bird gets a laser blaster that you aim by simply tapping on the object you want to shoot at once he’s in flight, while the Obi-Wan bird gets a force push move. 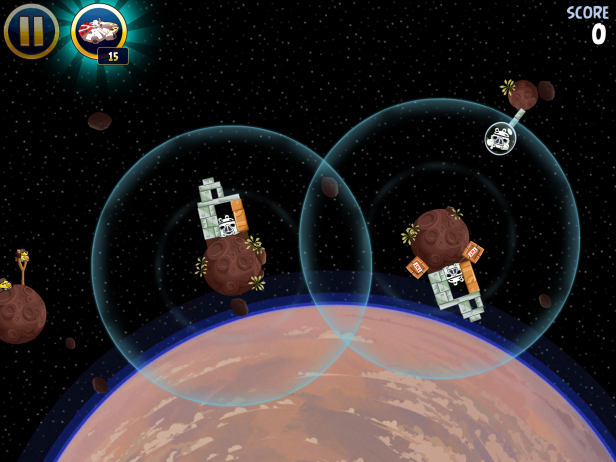 The pigs have also naturally undergone a Star Wars make over, as they’re now dressed up as Storm Troopers. Some even get to fire laser turrets too, while others fly around in Tie Fighters. Both of which add an layer of extra complexity to the game, as you can deflect laser shots with the light sabre or bash stuff into the turrets to move them so they’re firing against their own side.

For your two quid you get eighty levels split evenly between Tatooine and the Death Star. There are also bonus levels with R2-D2 and C-3PO to unlock and an in-game teaser shows a third world called Holt is coming soon as a free update. An additional world, called Dagobah, is available as an in-app purchase for £1.49 and adds another 40 levels.

Angry Birds Star Wars Verdict
The Force is strong with this one as Rovio has managed to meld the two brands together to great effect. It looks great, has bags of humour and is so insanely addictive that we could hardly tear ourselves away from it to write this review.