Unless you’re working on a mammoth RPG or the kind of real-time strategy game that has the power to envelope a player’s entire life, it’s rarely a good sign if your game spends more time ushering you between menu screens than it does actually letting you indulge in gameplay.

From its very first moments, Angry Birds Fight makes every effort it possibly can to ensure you spend as little time as possible actually taking on the gameplay. Why? Because it knows its gameplay sucks.

Angry Birds Fight is by no means the first match-three puzzler to attempt to make its mark on mobile, and Rovio’s decision to tie its IP to the genre is actually a logical  decision: before Candy Crush Saga there was Bejeweled, and before Bejeweled there were a whole host of others. Match-threes are nothing new and will continue to flow in and out of mobile because, in general, while the base remains the same, each developer does attempt to bring something new the overall structure of play. Well, each developer until Angry Birds Fight’s studio Kiteretsu. 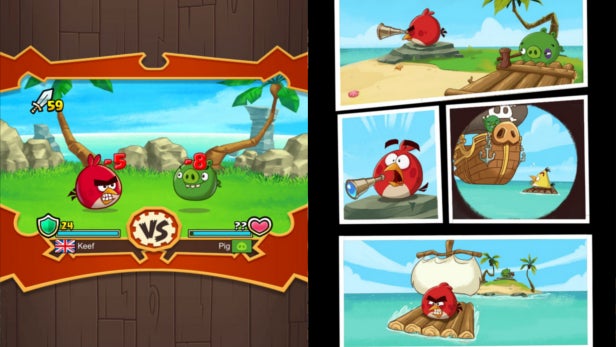 In practice, Angry Birds Fight actually removes tools from the match-three’s arsenal. In each game you have half a minute to make as many matches as you can, with the game predictably tasking you with lining up the franchise’s assortment of birds into groups of three or more. However, while lining up four or five birds triggers the kinds of bonuses we’ve come to expect from such puzzlers, there’s very little chance of you pulling off more than a couple in each play. The decision to make time your enemy in Angry Birds Fight means there’s no chance to plan ahead, with success coming from simply making the first match up your eyes dart to – match ups that typically involve no more than three birds.

Once the level is over, the game boosts your bird’s defences by attributing points from all your successful  matches before revealing the score of your (usually chosen at rival) online rival and setting them off against each other. avrious bonuses and power ups that you can attach to your bird aside, this is simply a number’s game, and the bird who has the most health remaining at the end of the automated battle wins. Should you be the victor, the game will then treat you to a number of flashing screens that indicate just what you’ve won; coins, gems, new items of clothing for your bird, all amongst countless other trinkets and treats that, you’re led to believe, are worth something. (Indeed, so not to lose your favour, the game also does much of this even if you lose.) 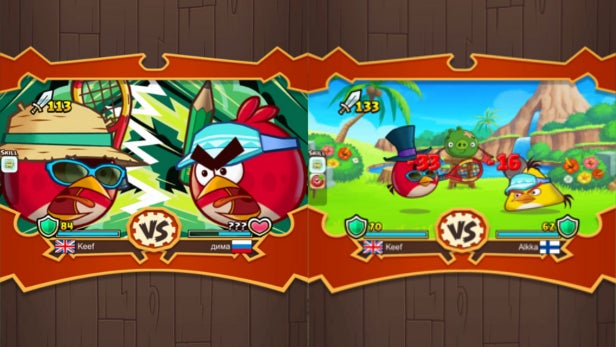 There are so many ranking systems, gauges and forms of power ups wrapped up in Angry Birds Fight that your average player will need to take several years off to study some kind of professional qualification on them to have even a basic grasp on what any of them mean. The big question, therefore, is why is there so much noise in Angry Birds Fight? Why is a game seemingly aimed at the younger player so damn complicated?

It all helps serve as a distraction. Strip away the slick presentation, the endless menu screens and the game’s obsession with lavishing gifts upon you, and what you have is a basic match-three game undermined by a determination not to let you play it. It’s the gaming equivalent of a significant other who knows your relationship is over so buys you a succession of expensive presents in order to make it too awkward for you to break up with them. You’ll do it another day, you say, a day when they’re not so chirpy, or the two of you have had an argument. Just to confound you, however, Angry Birds Fight is nothing but sweetness and light from the word go, doing everything it can to divert you from the game at the heart of it, namely because it knows it has no real game to speak of.

Which, as with Angry Birds Go before it, makes you wonder why Rovio is handing over the keys to its castle to a pretender. There is most definitely room for someone to make a match-three puzzler featuring the IP’s cast of now instantly recognisable characters, just as there is room to make a decent karting game, but decent is not a word that ever enters Angry Birds Fight’s lexicon. About as bad a spin off as you’re ever likely to see, the only thing developer Kiterestu has helped Rovio do is begin to sign its own death warrant.

Verdict
Cynical and without appeal beyond its slick presentation, Angry Birds Fight is not only a bad game in the Angry Birds series, it’s also a terrible match-three puzzler, doing everything its can to place your focus on its dressing rather than the rotten bird meat sitting at the heart of its paltry birdy banquet.