Thanks to endless spin-offs, it seems like Angry Birds has never quite flown away. But truthfully it’s been years since we’ve happily played an Angry Birds title, and the same amount of time has passed since we spied someone playing one on the train.

But nevertheless, Angry Birds has flapped back into our lives with a true sequel to the original game (six years and 14 games later…), naturally called Angry Birds 2. 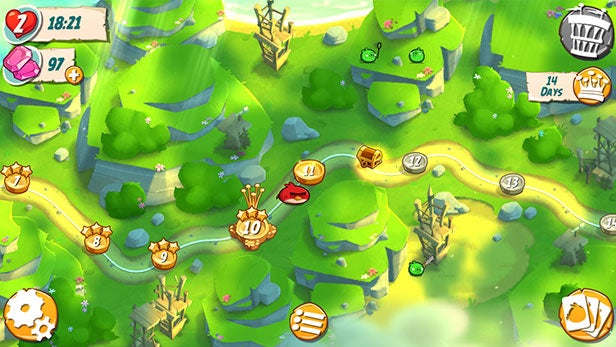 Over the years the Angry Birds series has dabbled in a variety of gameplay genres, from the downhill racer Angry Birds Go to match-three titles like Angry Birds Pop! to the more traditional budgie-flinging action of Seasons, Star Wars and more.

With Angry Birds 2, developer Rovio has adopted a life system that’s very similar to the immensely popular Candy Crush. You get five lives, which replenish at a rate of one every 30 minutes, which is exactly the same as with the Candy Crush games.

Once you’ve inevitably run out of lives, you’ll get given the option to refill the lot using 60 crystals. These can be earned in-game by hitting floating presents, or can be bought using real-world money with bundles of 80 starting at 79p, working up to 5700 crystals for a whopping £39.99.

Unlike in some of the previous Angry Bird titles, the in-app purchases are very subtle. So far, we’ve not had to touch any real money, instead choosing to wait for our lives to replenish. We’ve managed to accumulate quite the collection of crystals without spending a penny either.

The life system is only slightly irritating if you’re a gamer like us that sees getting that three-star perfect score as a necessity rather than an option. You can’t repeatedly retry a level like you could with older Angry Birds, but if you can manage to curb that OCD, the life system is perfectly agreeable. 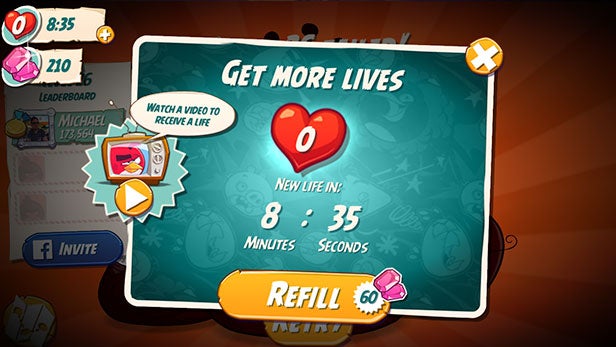 Aside from the new life system, you’ll find the actual gameplay very familiar. You still have to catapult a selection of feathered friends into constructions that house the evil Piggies. This time around there’s a lot more freedom in the flinging, though. Your flock actually comes in the form of a hand of cards, meaning you can choose which one has the most appropriate skills for the level you’re facing.

In each level, you start off with three cards in your hand, but if you destroy enough objects with your fling, you will fill up the “destruction meter” in the top-right-hand corner and earn yourself an extra card.

This comes in handy, as the levels are now split into individual chapters, where you might have two or three sections to each one. That means if you waste all your birds on the first section, you won’t be able to move onto the next one unless you spend some crystals or start all over again.

What we really love about Angry Birds 2 is that the levels are procedurally created every time. That means it doesn’t matter how many times you retry a level, it won’t ever be exactly the same – an explosive box might be in one place the first time around, then the next it’ll be somewhere else, encased in a stone box. You have to work out your tactics on the fly, as something you tried the first time won’t work the next. It’s a great evolution of the game and feels like it offers a more adult challenge than previous Angry Birds titles. 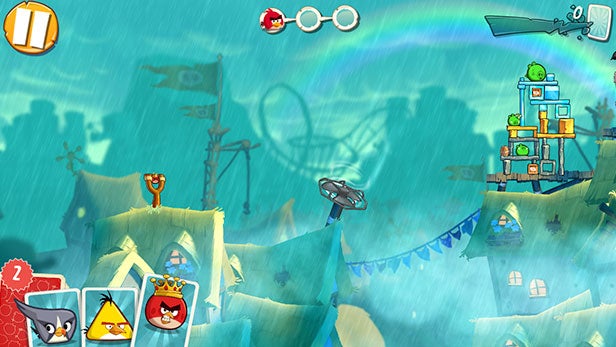 The graphics have come a long way too. It’s still got that cartoonish appeal, and the characters have adopted a more comic book-inspired styling than before. But it’s the landscapes that have seen major changes. There are now weather effects with thrashing rain and rainbows making appearances at times, while the backgrounds themselves have far more depth. Playing on an iPhone 6, you can really see the enhancements that have been made. And the music is very chirpy and atmospheric too.

The way the game is laid out now is that the level paths weave through various areas, which changes the dynamics and feel of each level set. You’ll also notice that every five levels or so you’ll come across a boss fight, with the oversized piggy flying in on a themed blimp and causing you to use all your skills to take it out – and its chunky health bar.

It’s at that point you might want to utilise another of Angry Birds 2’s new features – Spells. Throughout the game you’ll pick up five spells that you can use if you’re feeling the pressure of a particular level. The first lets you unleash an air drop of explosive rubber ducks that can pretty much destroy everything in a given area, but later on you’ll pick up a chilli spell that explodes a piggy and his surrounding area or an ice spell that freezes all the constructions in the chapter.

You get a selection of these spells for free, but you can purchase them with in-game crystals and real-world money if you really need to. You can also pick them up as one of your “extra card” perks when you fill the destruction meter. We’ve never used these skills unless we’ve got them as an extra card, so it’s not like Angry Birds 2 will force you to dip into your wallet. 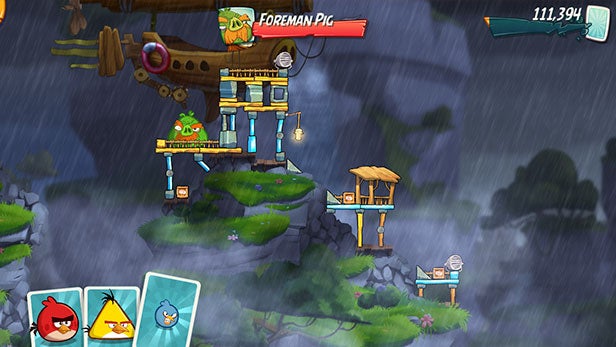 Angry Birds 2 has also introduced the Arena. This is a very different experience, as it features different leagues, endless levels and special feather rewards separate from the main game. There’s a daily tournament for you to take part in, with some costing crystals or real money to enter. They’re entirely optional, though, so don’t be conned into spending anything to get into a tournament. Just wait until the next day and there might be a free one you can enter. Or you can just carry on with the main game, as there’s plenty to do there.

There are also challenges to complete in the main game, such as collecting, sending a gift to your Facebook friend, or using a spell. The tournaments are just a distraction half the time.

Angry Birds 2 is the best in the series so far. You can forget about all the silly spin-offs, because the enhanced graphics, finessed gameplay and new challenges mean there are plenty of reasons to put all your eggs in Angry Birds 2’s basket. Plus, it’s totally free.