But then we come to the second half, where the brawling goes online in a series of multiplayer modes designed for up to 16 players. This is where Anarchy Reigns makes sense. Sprawling maps, random events like black holes or stomping mutants, plus weaponry and items to chuck around all make for a chaotic all-against-all skirmish – the closest thing we’ve had to Capcom’s Dreamcast classic PowerStone this generation. 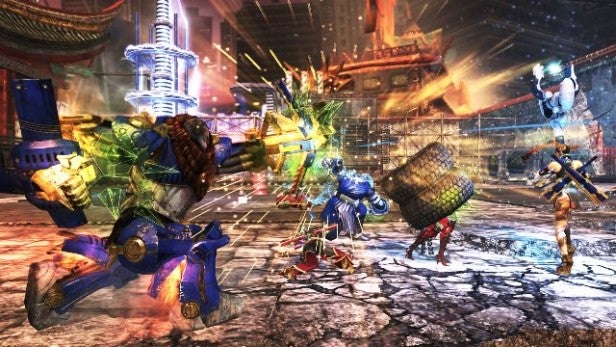 Jack himself is a master of mayhem, but multiplayer gives you a chance to get to grips with other characters, all with their own attacks, their own signature weapons and their own strengths and weaknesses. There’s something a little generic about the character design, or even imitative – you’ll swear you’ve seen the combatants before in a Metal Gear Solid, a Dead or Alive or a Tekken – but it all makes for a madcap melee on the screen. And did we mention that a playable Bayonetta is only a DLC download away?

There are additional modes to get through too, ranging from one-on-one cage battles through four-on-four team deathmatch options to a weird derivative of five-a-side football (four-a-side here). There’s a ranking system, which allows you to unlock new characters as you level up, and options for private matches against invited friends or AI opponents. What’s important is that by looking to the brawler rather than the classic Streetfighter/Tekken school of fighting games, and by stealing ideas from online FPS games, Platinum has crafted something that feels like nothing else. Anarchy Reigns still requires a mastery of technique, and newbies will find the early hours painfully tough, but there’s a sense of, well, anarchy to the proceedings that adds some much-needed excitement to the genre. 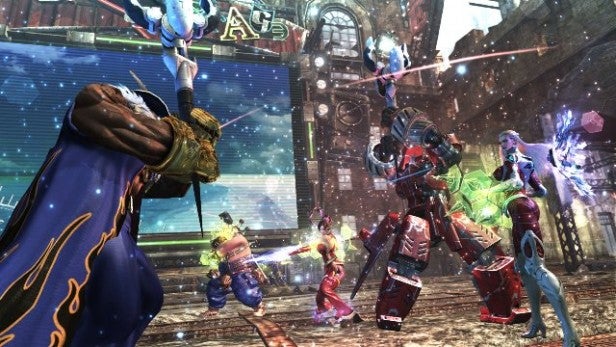 It’s still not perfect here, though. While things should change with the European release, it’s often hard to find well-populated games, and we’ve particularly struggled to find open games in the flagship 16-player Battle Royale mode. The constantly shifting camera makes it hard to maintain all-round awareness, or even keep an enemy in sight, and grab and throw moves seem slightly overpowered. Most annoyingly, you’ll need to either plumb through the single player campaign or keep chipping away at the rankings before you can unlock some of the most interesting characters.

This makes things tricky. Multiplayer Anarchy Reigns is all very enjoyable, but it has a steep learning curve. The best way to overcome that, and unlock more characters, is to play the single-player campaign, which isn’t nearly so entertaining. You can’t help feeling that Anarchy Reigns would have worked better as a budget-priced, multiplayer-only download game with the full roster unlocked at the start and the single-player mode excised entirely. That way you’d have all of the good stuff but none of the baggage.

A brilliant multiplayer brawler bolted to a so-so single player campaign. In online matches Anarchy Reigns delivers vast quantities of unpredictable, ultra-violent mayhem, though it’s still not a flawless experience. Sadly, to get the most out of it you’ll either have to put up with the foibles of single-player or spend a lot of time slogging away against more experienced opponents