With this reboot, Harmonix is going right back to the roots of the genre, not to mention back to its roots as a studio. The result is a game that successfully updates the PS2 game for the PS4 generation, even if it suffers from some of the same problems that hobbled the studio’s last game, Rock Band 4.

Amplitude sees rhythm action stripped back to its arcade, score-attack fundamentals. Here there are no plastic peripherals, no big band tie-ins, no band customisation options, cinematics or live action videos. Unless you’re a massive fan of indie game soundtracks and obscure EDM acts, you won’t even recognise the tracks or artists. Even more than Frequency, with its Paul Oakenfold, Orbital and Crystal Method tracks, Amplitude 2015 is all about the collision of music, psychedelic visuals and gameplay, and nothing more. 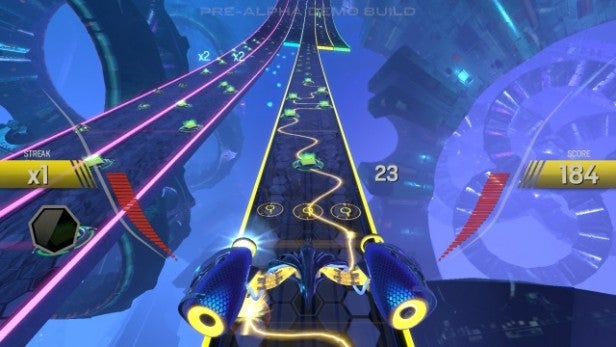 Basically, you pilot a sort of spacecraft that hovers along one of several ribbons of glowing light. Each ribbon holds a series of connected dots, corresponding to notes or beats from one of the instruments on the current track. Each dot is keyed into a specific button – the L1, R1 and L2 triggers in the default PS4 configuration – and your main task is to press the right button to blast that dot with perfect timing. Blasting all the connected dots in a sequence will complete that section of track.

However, there’s more to it than that. For one thing, you need to switch between the different ribbons, completing a sequence on one then hopping rapidly to the next. For another, Amplitude is really about building up strings and combos, completing the sequence then jumping just in time to start a new one. Finally, specific sequences unlock power-ups, allowing you to clear a stretch of track at once, slow down the movement and music, add a multiplier to the next few sequences or even float, free and easy above the ribbons. 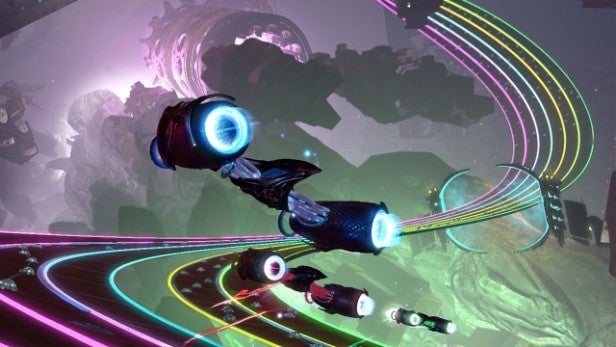 That’s enough to transform Amplitude from a simple rhythm action game into one of the most demanding score attack games around. Sure, you can fluke your way through most of the tracks on basic difficulty, but getting high scores or completing stages on intermediate difficulty requires more effort. Learning the tracks, developing strategies and timing your transitions to perfection becomes crucial.

It’s also one of those games where it’s all about getting in and staying in ‘the zone’, so that you’re no longer even thinking about which buttons to press, but immersed in the flow of music, dots and colours. Lots of games make claims about hypnotic visuals and synaesthetic effects, but Amplitude, with its neon swirls and fascinating Rez-esque abstract backgrounds, actually merits them. It also demonstrates that no studio with the exception of the new Guitar Hero Live’s Freestyle Games can match Harmonix when it comes to integrating music and gameplay into one convincing whole.

The experience as a whole is horribly compulsive in a ‘I started playing at 10pm and its now one o’clock in the morning’ sort of way. You can easily spend half an hour trying to improve your score on a single track, promise yourself that you’ll just try the next one, then surface another twenty minutes later, wondering exactly what went wrong. 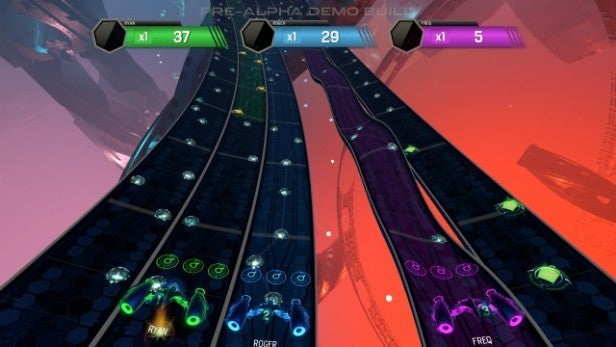 The game’s biggest limitations will be obvious from the start. The campaign mode is billed as a fifteen track concept album, and while the experimental mind-expanding therapy angle is vaguely interesting, you’ll crack it within an hour or so, albeit only on the basic level. That leaves you with the option to return and try again for better scores or on a higher difficulty level, or with a quickplay mode with an expanded track selection. This takes in tracks from popular indie hits like Crypt of the Necrodancer, Transistor and Skullgirls plus tracks from minor EDM acts, with many locked off until you reach certain criteria. Quickplay extends Amplitude’s lifespan, but maybe not to the same lengths as a Rock Band or Guitar Hero game.

The same might be said of the quickplay mode’s built-in local multiplayer support. Harmonix has gone for a competitive, four-player battle vibe, complete with power-ups designed to spoil the other players’ chances, but it can’t reach the heights of Rock Band 4’s majestic co-op or even the Guitar Hero reboot’s GHTV mode.

The soundtrack will also be a stumbling block for some people. There’s no doubt that one of the great pleasures of rhythm action games is the killer combination of fun, accessible gameplay with familiar music, and while I actually like the tracks on Amplitude and the way that different mixes emerge as you play, it makes for a different experience. There’s still a powerful synaesthetic rush of beats, harmony and colour, but not the kind of emotional connection you get when a favourite song or some cheesy nineties hit turns up in a Guitar Hero or Rock Band. This is the one area where the similar Rock Band Blitz – Harmonix’s under-appreciated arcade spin on the Rock Band franchise – comes out ahead. 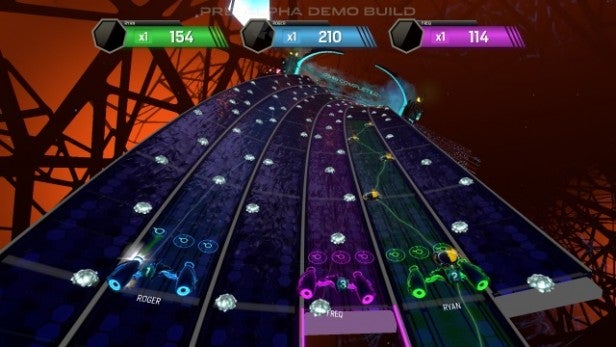 And, while I’m carping, it’s also worth mentioning that some of the rapid-fire dots and rhythmic patterns in later songs with higher difficulties are spectacularly hard to hit with an ordinary controller. Trying to get a fast five or six beat cluster with the Dual Shock 4’s triggers is no picnic, though I can’t say that my reaction speeds are entirely free from blame.

Still, let’s get things in perspective. This is Harmonix working as an indie team, not as a blockbuster powerhouse with the financial muscle of an EA or Activision behind it. This is also a budget game, costing a very reasonable £15.99. Most importantly, there’s something very pure and focused about Amplitude’s approach that keeps you coming back for more. Sure, it hasn’t got the world’s biggest or most famous track list, but that won’t stop you replaying one track time and again for twenty minutes in the hope of hitting a higher rating or leaderboard position. If high scores matter more to you than high profile artists, Amplitude will give you what you crave.

Verdict
Amplitude hasn’t got the high-profile tracks or acts to make it as a blockbuster music game, but it has got the gameplay chops, the visuals and the soundtrack to make it as hypnotic, score-attack arcade game. On that level it’s still a little short on long-term appeal, but as accomplished and horribly addictive as anything Harmonix has produced.