The Ryzen 2700 and 2600 are the two slightly slower eight-core and six-core counterparts to the AMD Ryzen 2700X and 2600X. Their lower clock speeds correspond to lower prices but, unlike with Intel’s lower-tier processors, they still retain an unlocked multiplier for easy overclocking. As such, they could potentially be the better option for those willing to overclock.

In particular, the 2600 could be an ideal mid-range gaming choice. It costs just £166 yet offers six-cores capable of processing 12 threads at a time and a peak clock speed of 3.9GHz.

Otherwise, these two chips offer the same core features as their X brethren. These include a new 12nm manufacturing process, Precision Boost 2 and XFR2. Read on to see if they deliver on their promise.

Starting with the 2700, its maximum clock speed of 4.1GHz is within touching distance of the 2700X and is a marked improvement over both the 1700X and 1700 of last year. As a result, it should do a decent job of keeping up with the 2700X in single-core workloads.

However, its base clock speed is relatively low at just 3.2GHz, compared to 3.7GHz for the 2700X. This was also the case with the older 1700X and 1700, and it particularly hampered those chips once more than one core was under load; the chip essentially dropped to that base clock speed.

For the 2700 to be a viable option, it will have to do a better job of maintaining its clock speed under multi-core workloads.

The upside to these lower clock speeds is that the 2700 has a power consumption rating of just 65W TDP. That compares to 105W for the 2700X. As for the 2600, it peaks at 3.9GHz, which is a little further back from the 4.25GHz of the 2600X. This means it will struggle a little to keep pace, unless overclocked. However, it has a base clock speed of 3.4GHz, which suggests it will do a slightly better job than the 2700 of maintaining a higher clock speed once several cores are under load.

Moreover, compared to the 1600 of last year, it’s been given a nice boost. Its base clock speed is 200MHz higher, while its boost clock is 300MHz higher.

Clock speed aside, the other main difference between these two chips and the X chips is the included cooler. For its first-generation Ryzen processors, AMD didn’t bundle a cooler with its top-tier processors. This made its lower-tier products all the more of a bargain for those who didn’t already have a compatible cooler.

This time round, however, the 2700X ships with the excellent Wraith Prism cooler, which bumps up its value considerably – especially compared to the Intel 8700K and 8600K which don’t include a cooler.

With the 2700, AMD has dropped down to the less fancy and less capable Wraith Spire LED cooler. It uses a milled aluminium heatsink, rather than the folded sheet-metal arrangement of the Wraith Prism, and it doesn’t include any heatpipes. Overall, it’s far less able to dissipate heat.

Meanwhile, the 2600 drops even further to the Wraith Stealth, which has a heatsink that’s half the height of the Wraith Spire and doesn’t even include a copper base.

Both coolers will keep the processors running quite happily in their default configuration, but overclocking will be limited with such basic coolers. 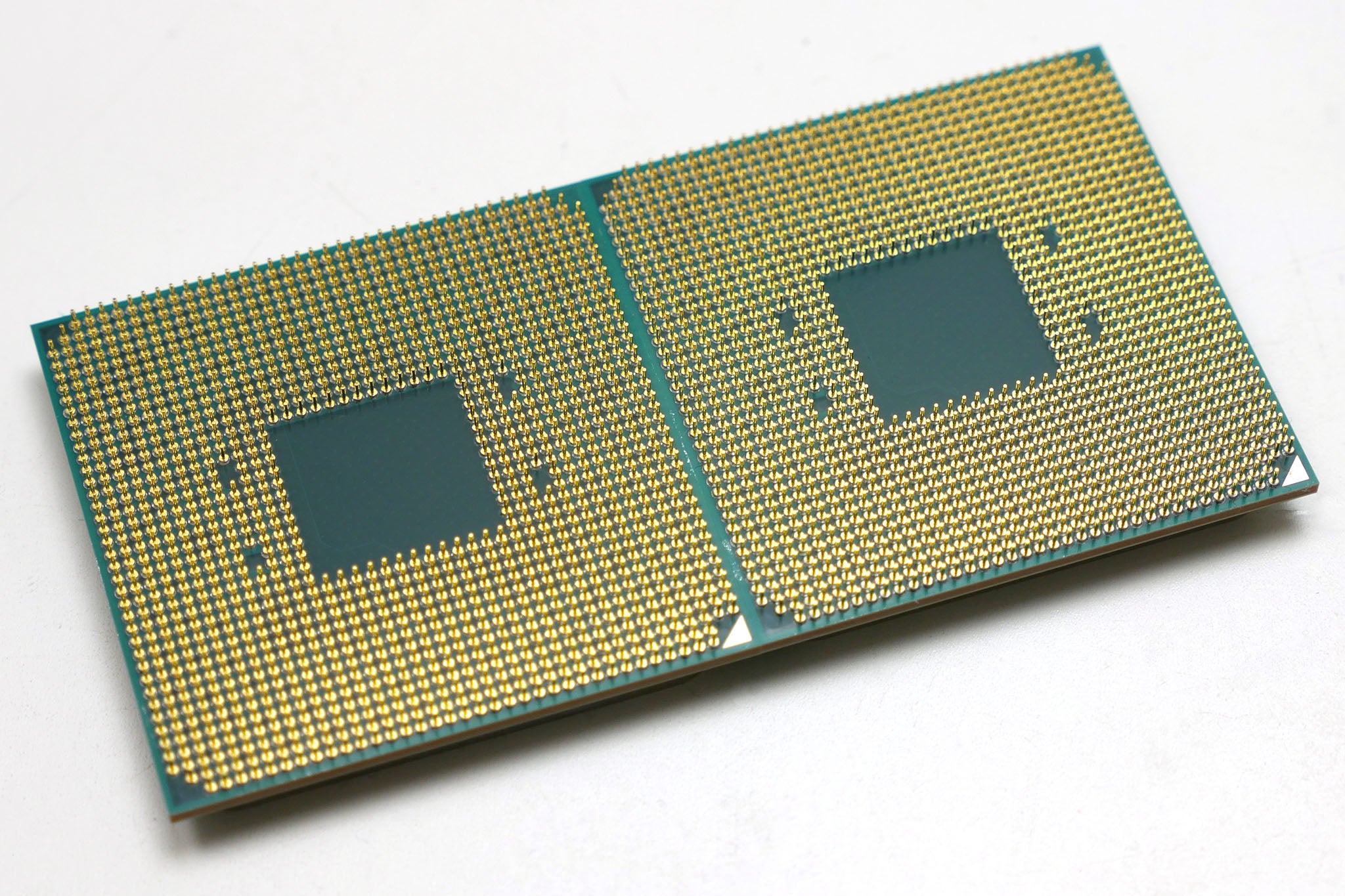 All told, as they stand these processors will be noticeably slower than their X counterparts. However, if you already have a quality cooler that will be compatible with these processors, and are willing to overclock, then there’s still potential here.

Meanwhile, Intel’s main competition for the 2700 isn’t a direct rival as such, since it’s only a six-core part that lacks HyperThreading, and can only process six threads at a time. However, the 8600K has a base clock speed of 3.6GHz and a boost clock speed of 4.3GHz, giving it a clear advantage in this regard.

As such, while they’re the same price, they almost serve different needs. The 2700 will be the choice for those who value multi-core workloads, while the 8600K will be for those who just need the raw speed – gamers, for example.

For the 2600, the competition is a bit more direct. The Core i7-8400 is Intel’s closest competitor. It’s a six-core processor that doesn’t have HyperThreading, either and has relatively modest clock speeds of 2.8GHz base and 4.0GHz turbo. It also has a locked multiplier, so overclocking is much more limited.

Alternatively, there’s the 8350K, which is just a quad-core part clocked at a fixed 4GHz (it has no boost clock speed) but can be overclocked. This high overall clock speed and overclockability makes it potentially the best choice at this price for gamers.

For more information on the underlying improvements brought in with the AMD’s second generation of Ryzen processors, head on over to our review of the 2700X and 2600X.

The short version is that AMD has boosted clock speeds without increasing power consumption, thanks to the move to a 12nm manufacturing process. You also get the improved Precision Boost 2 and XFR2 automatic overclocking features.

Also improved is memory latency and compatibility. These chips are officially compatible with 2993MHz DDR4 (faster RAM should work, but isn’t officially supported), plus memory latency has been reduced, making the processors a little less reliant on fast RAM.

We started out testing with the ever reliable Cinebench R15, whichgives a very consistent measure of raw CPU speed. It provides both a single-core and multi-core test. 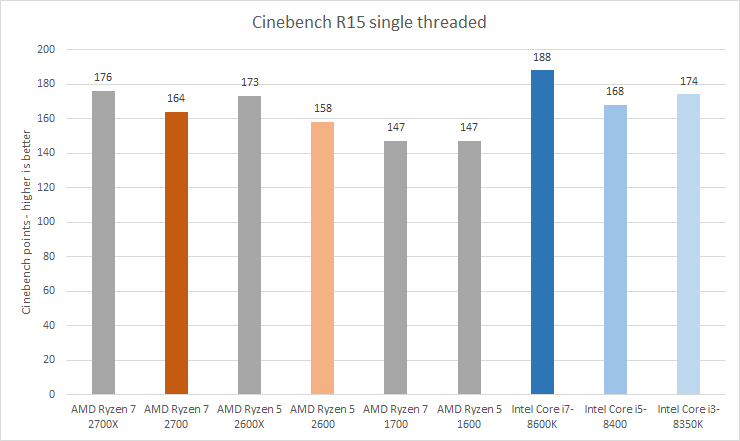 Looking at the results for the single-core test and the clock speed advantage of Intel’s processors is clear to see, with all three rival chips coming out on top. 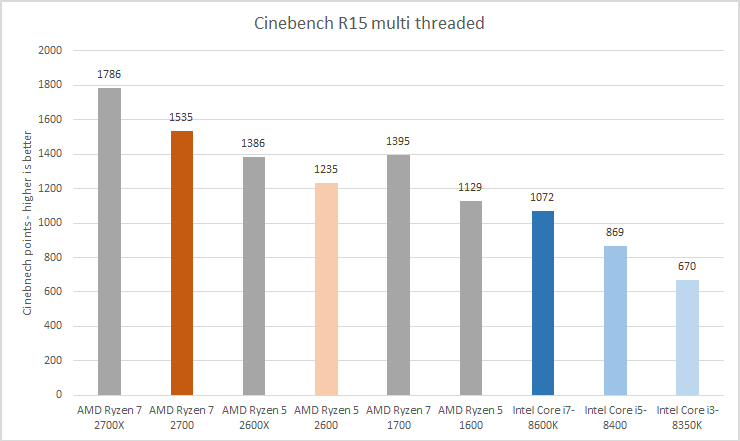 However, it’s a complete role reversal when it comes to the multi-threaded test. Here, AMD’s advantage in the number of cores means its chips pull out massive leads. 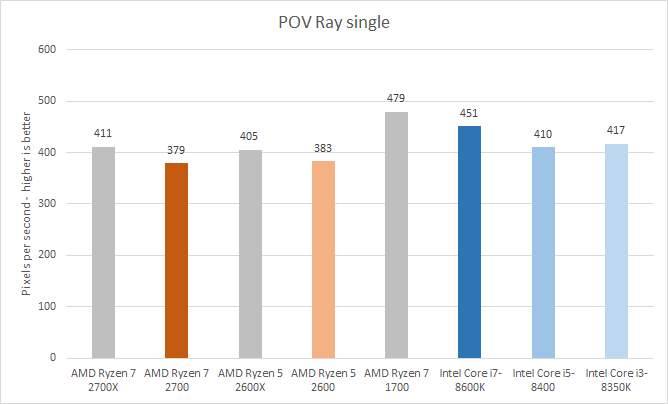 Next we ran the render test in POV-Ray, which is another very reliable test of both single-core and multi-core workloads. 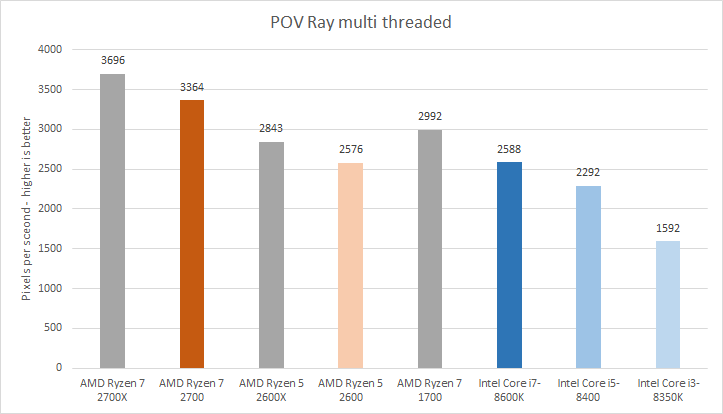 In the single-core test, we again see the small advantage in single-core performance for Intel then a big flip round for the multi-core test.

As for gaming, this is where clock speed is still king. We largely see results that reflect Intel’s overall single-core speed advantage. 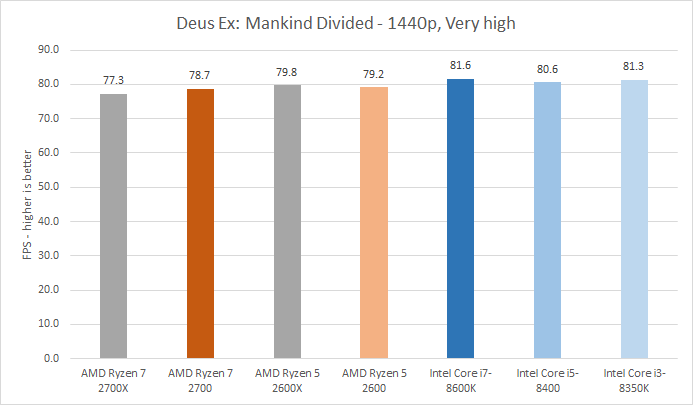 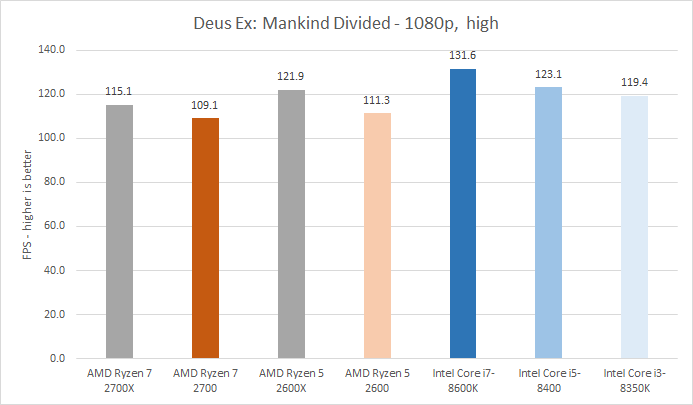 However, notably, this advantage is only at all significant at lower resolutions, where the graphics card isn’t otherwise the performance bottleneck. In the 1440p test with Deus Ex: Mankind Divided, for instance, the difference is less than 2.6fps across all five processors.

Even at 1080p, this only increases to 22.5fps. This isn’t to be sniffed at, but considering all the processors were delivering well over 100fps, those dropped frames per second are felt far less acutely than they would be if the overall average were much lower. 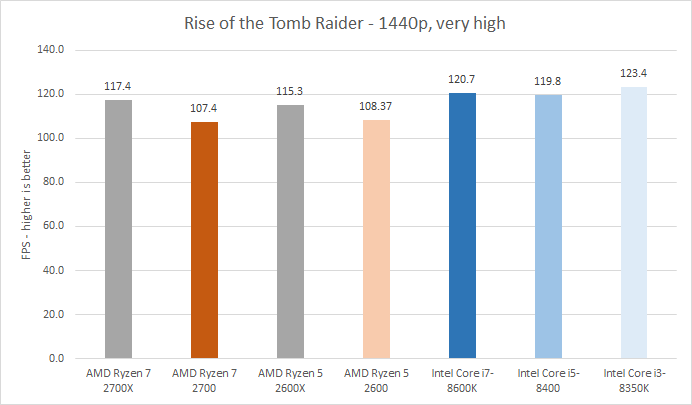 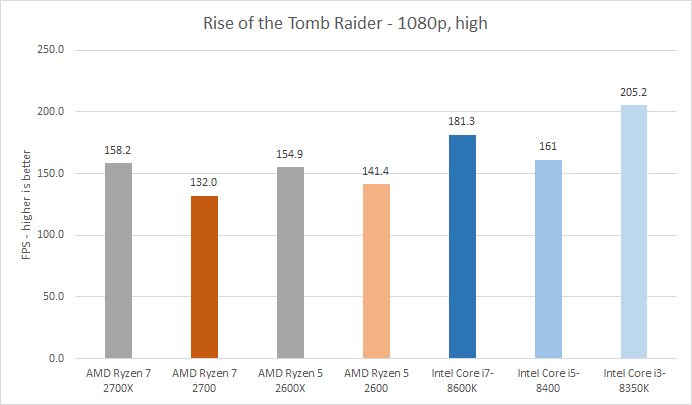 It’s a similar story in Rise of the Tomb Raider, with a very small difference in performance at higher resolutions. However, there’s more of a wild variation at lower resolutions, so much so that the results were a little bit anomolous – the 8350K shouldn’t really be quicker than the 8600K, but there’s enough of a pattern to get the general idea: if gaming is your priority then any of the Intel processors tested here will be a better choice than the 2700 or 2600.

One of the key things AMD has been keen to flaunt with its latest processors is that they’re all multiplier unlocked and so are easy to overclock. However, in actuality, this is of very limited benefit.

In our tests we struggled to get either the 2700 or 2600 running all cores at the same frequency as their single-core boost, meaning single-core performance, and thus gaming performance, wasn’t improved.

Now, there are reports of these chips merrily being overclocked to beyond 5GHz in extreme situations, but at sensible voltages and temperatures, they just don’t seem to deliver the goods.

In fact, we’d almost go so far as to say that you shouldn’t really think about overclocking these chips as a matter of course, but rather think of overclocking potential as a little extra that you can gamble on. 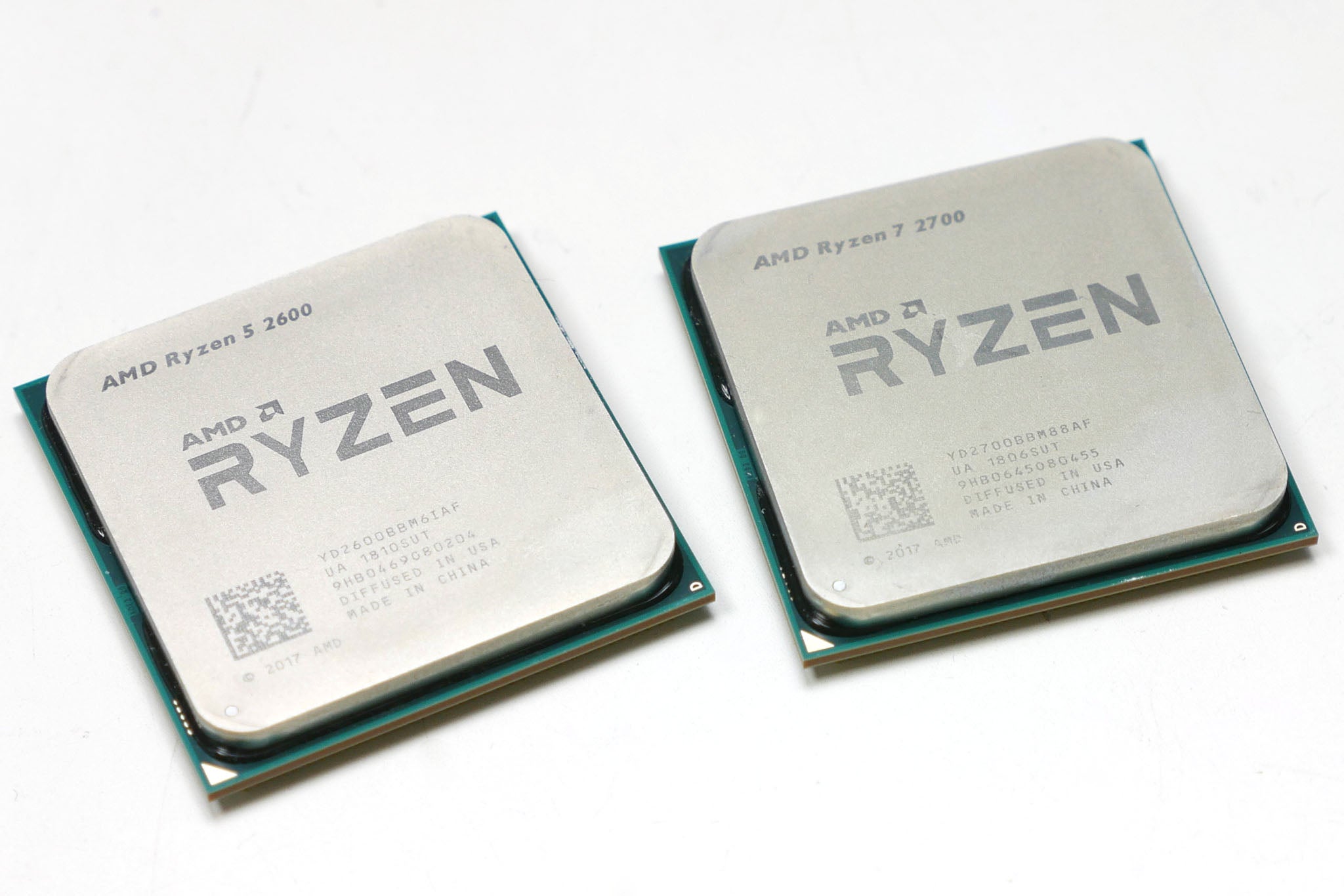 These are both great-value processors, ideal for heavy-duty workstations where heavy multi-tasking or multi-threaded workloads are the norm. They absolutely obliterate the competition from Intel for such tasks. They’re also perfectly adequate for anything else, including gaming.

However, there’s no getting round the fact that AMD just can’t keep pace with Intel for clock speed, so when it comes to single-core tasks – including gaming – Intel’s competing offerings will prove a better choice.

AMD should have been able to counter this basic fact with the offer of easy overclocking, but these chips just don’t stretch far enough to make up the gap. As such, it depends where your priorities lie.

Meanwhile, the 2600X is only £30 more than the 2600, but its reasonably high base clock means it delivers consistent performance.

It’s the same old story. AMD’s latest chips are great value for certain tasks but less so for others. You get masses of multi-thread performance, but single-thread and gaming performance trails Intel’s rival processors a little.