The 1800X is pitched directly at the Intel Core i7-6900K, so it is here that we’ve focused our testing – although we have included scores from our Core i7-7700K review too.

*We haven’t previously tested the 9590 so this data is gathered from third-party benchmark results.

I tested the 1800X on two X370 motherboards, the Asus Crosshair VI Hero and MSI Xpower Gaming Titanium edition. Costing £250 and £300 respectively, these are premium boards but more entry level X370 boards can be had for £150. Meanwhile, B350 boards are available for under £100, with Crossfire/SLI support being the only major feature you miss out on. In contrast, the cheapest X99 board is £170.

The two boards tested both feature the same sort of features you’d expect of a high-end Intel motherboard. Each has a couple of M.2 slots, quality onboard audio, CMOS readouts, plenty of USB 3.0 and SATA ports and lots of little extras like fan headers and onboard buttons for power, reset and so on. So in terms of the overall platform you’re investing in, there’s little you miss out on opting for either AMD or Intel.

The go-to test for CPU speed is Cinebench, which renders a 3D scene purely using CPU power. It provides reliable results that indicate both single-core and multi-core performance. 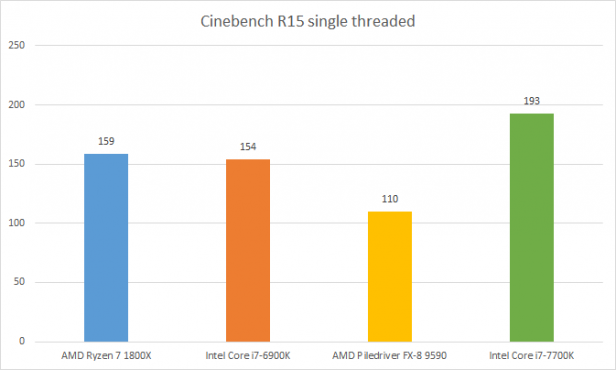 What’s immediately clear from the single-core test is that neither the 6900K nor the 1800X is close to being the fastest. The 7700K runs away with that record, which is hardly surprising given it’s clocked to a much higher 4.6GHz.

This may well have an effect on gaming performance, since many games running at lower resolutions are limited by the performance of the CPU rather than the graphics card. While I wouldn’t expect the difference to be significant, gamers might still be better off with a Kaby Lake CPU for a reasonable frame rate increase. I’ll report back once I’ve done more in-depth testing.

As such, it will be interesting to see if AMD can also offer higher clock speeds on its quad-core Ryzen products when they arrive. Otherwise, AMD may well be able to compete at the very high multi-core level but will still miss out to Intel when it comes to the combined single- and multi-core performance that’s the mainstay of mainstream performance. It’s a similar story when it come to another stalwart of CPU testing: POVray. Here we again see the 1800X just pip the 6900K in the single-thread test but miss out big time to the 4700K. In the multi-threaded test, though, the 1800X and 6900K pull well clear, with the 1800X again taking the overall crown
. 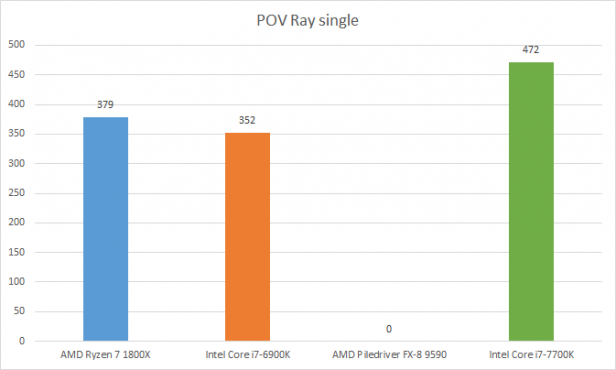 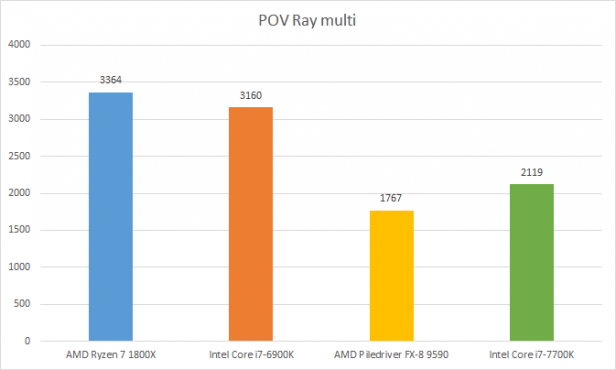 Turning to video transcoding using the multi-thread enabled Handbrake, I converted a 1080p video to 720p, encoding to h.264. This was a very close test, with the 1800X again just coming out on top, taking one second less time to complete the task. 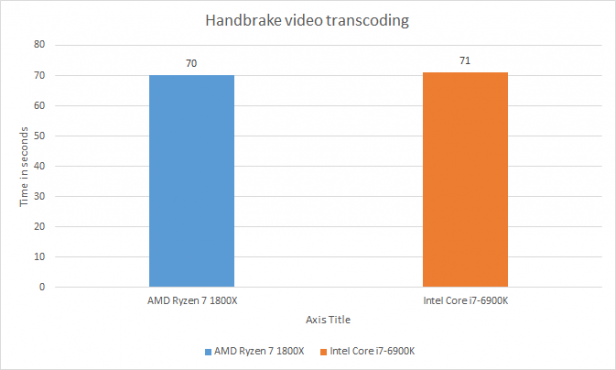 As for power consumption, the 1800X again comfortably beats the 6900K, with the whole system consuming just 41W at idle compared to the 71W of the 6900K. Under load the gap actually narrows, which I wasn’t expecting, but the 1800X still has a clear 10W advantage. 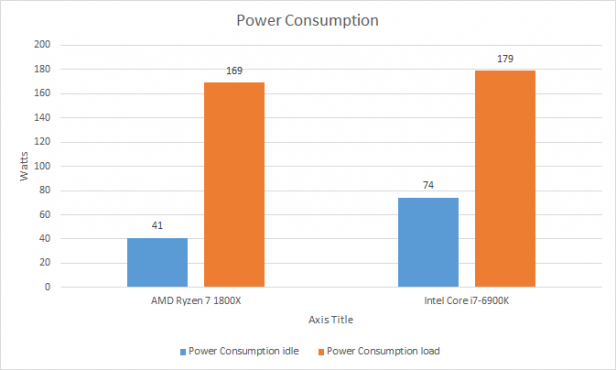 We started our game testing with The Witcher 3, a game that puts minimal load on the CPU and is almost purely GPU-bound and reliant on a single-core at a time. This gives a good demonstration of the majority of games. Only those games where you have masses of AI or human opponents on screen tend to put much strain on the CPU and benefit from multi-core chips. 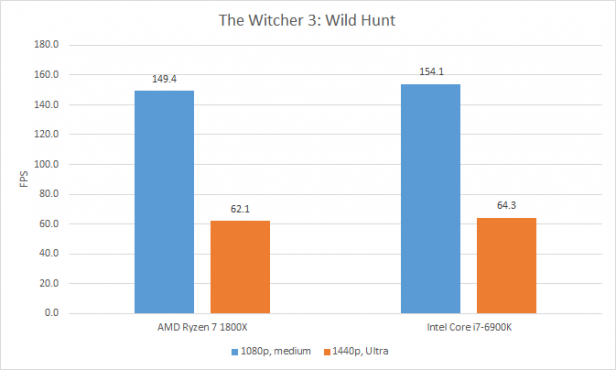 What we can see is that in this title the performance of the 6900K and 1800X is all but identical. This is to be expected given the very similar instructions per clock and clock speed of the chips. In contrast, the 7700K would have a distinct advantage at the lower resolution test where its higher clock speed would be able to push it another 20fps or so higher. At higher resolutions and details settings, though, it’s consistently the GPU that will hold back the framerate.

Again, this is fairly representative of the majority of games so if you’re after a CPU that’s best for ludicrous framerates at low resolutions then the 7700K is your best bet.

Moving on to a more challenging gaming title, Battlefield 1, puts more strain on CPUs thanks to its use of many AI or human opponents, particularly on large multiplayer maps. Nonetheless, the 6900K and 1800X were again very close, and in fact were all but identical at the higher resolution, high detail test, again demonstrating how GPUs are generally the limiting factor.

Meanwhile, at the lower resolution, the lead the 6900K has could equally be down to Battlefield 1 having been optimised to run best on Intel’s chip, rather than any inherent performance advantage. A bit of optimisation by the games’ developers could bridge that gap. 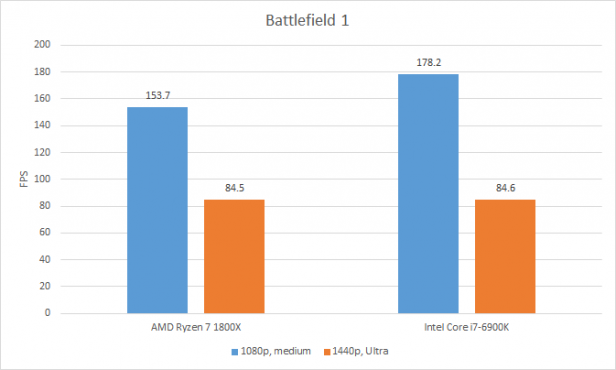 Our final, and most CPU-challenging, test is Ashes of Singularity, an RTS that puts hundreds of units on screen at once, putting massive strain on the CPU. The framerate is the actual framerate of the game’s in-built benchmark, while the CPU-framerate is the maximum predicted framerate is the GPU weren’t a limited factor. 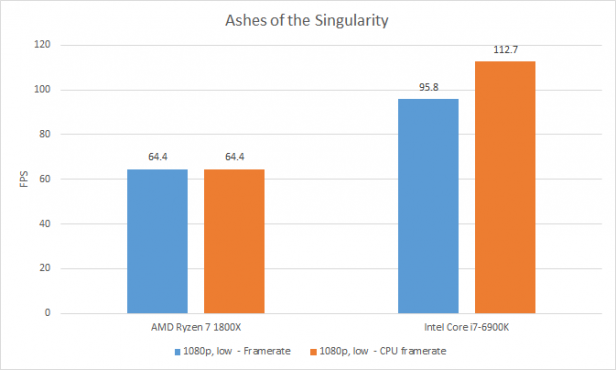 Here we see the 6900K pull out a massive lead over the 1800X, again suggesting the game developer has optimised their game in such a way that it doesn’t get on with the AMD chip right now. We’ve read that turning off simultaneous multi-threading actually increases performance in this game, though our system refused to boot when we turned that feature off. 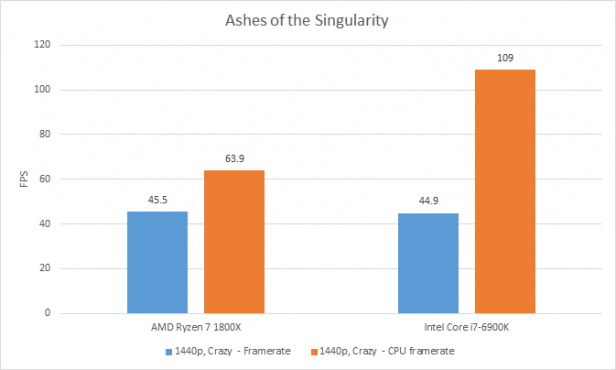 Turning the resolution and detail settings up again sees the performance of these two chips level out, with the 1800X actually just pipping the 6900K to the post. However, the CPU framerate prediction again shows how the game can perform much better on the 6900K.

Overall, gaming performance is pretty much in line with Intel, with the main differentiating factor being clock speed. With these two eight-core chips, both are limited for clock speed so come out with very similar results. However, moving to the faster-clocked 7700K would improve performance at low resolutions where the game isn’t otherwise limited by GPU performance.

As for power consumption, the 1800X comfortably beats the 6900K, with the whole system consuming just 41W at idle compared to the 71W of the 6900K. Under load the gap actually narrows, which I wasn’t expecting, but the 1800X still has a clear 10W advantage.

Overclocking
All Ryzen CPUs are set to be multipler unlocked making for very easy overclocking – just up the CPU voltage and increase the multiplier and away you go. However, there are a couple of downsides too.

Upping the multiplier to x39, and the Asus ROG Crosshair VI Hero happily ran the 1800X at 3.9GHz without the need for any voltage adjustment – the board seemed to default to running at quite a high voltage anyway. This resulted in a nice jump from 1615pts to 1701pts in the Cinebench multi-threaded test. However, the single-core test score dropped from 159 to 157.

Ryzen can be pushed higher than this fairly easily, though. With a bit more CPU and SOC voltage, 4.0-4.1GHz is achievable on air cooling and 100-200Mhz more than that with beefier cooling.

Power increases fairly significantly with overclocking but if you keep things modest it stays in check. At 3.9GHz I measured our system’s idle power consumption increasing from 41W to 52W (still 20W below the 6900K) but power consumption under load leapt from 169W to 215W.

Also, overclocking can be done via AMD’s new Ryzen Master Utility, which provides clock speed and voltage adjustment via a simple Windows app. It’s definitely slightly more intuitive than trying to overclock via the motherboard’s EFI but those familiar with overclocking on Intel platforms should be right at home just diving into the EFI.

It’s clear that AMD has well and truly delivered with the AMD Ryzen 7 1800X. It comfortably beats everything Intel has to offer for the same price or less in any pure-CPU tasks, and even beats the hugely pricey Intel Core i7-6900K. As such, if you’re looking to put together a new high-performance PC, for the first time in ten years I can recommend that you consider using an AMD CPU.

The only exception right now is gaming, where it’s clear many games have been optimised to perform at their best on Intel chips. However, this tends to only manifest at low resolutions and extreme framerates where GPU performance isn’t the limiting factor. Moreover, we fully expect the majority of games developers to release updates that address many of these performance issues. It’s only the current gaming performance that prevents the 1800X scoring a maximum 10/10 score.

However, the true picture of just how big an impact the full AMD Ryzen launch will have on the CPU market – and PC market as a whole – won’t be clear until cheaper, less powerful chips arrive later this year. Having the multi-core performance crown for its price is all well and good, but most consumers aren’t looking to spend £500 on a CPU and will want something substantially cheaper for gaming.

What will be crucial is whether AMD’s quad-core processors, in particular, can be run at the same sort of clock speeds as the likes of the Intel Core i7-7700K. If they can then we could be set for some truly interesting times.

Either way, what’s perhaps most exciting about the Ryzen launch is that it opens up the opportunity for users in the not too distant future to be able to buy one cheap motherboard and processor and know that they can potentially upgrade to eight-core performance – without the hassle and expense of switching to a higher-performance motherboard.

AMD has lived up to its promises and delivered quite simply the best high performance CPU you can buy right now, for the money. Those not in the market for a £500 CPU, though, will have to wait until later in the year to find out if it’ll be worth going the AMD route.