In our tests, the Ryzen 7 1700 performed exactly as we expected. That is, it was super-impressive in multi-threaded workloads but struggled in single-threaded ones. 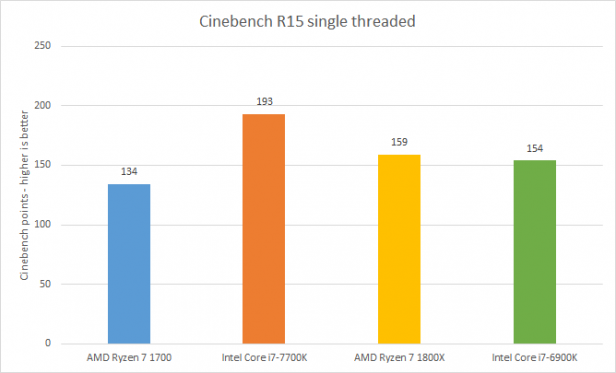 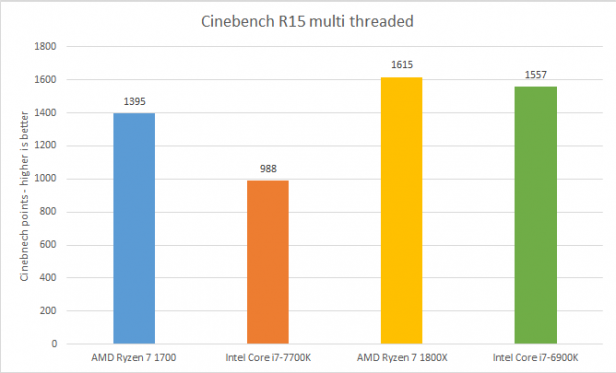 Similarly, in POV-Ray, the 7700K established a 50% lead in the single-threaded test but then dropped all the way back to trail the 1700 by 35% in the multi-threaded test. 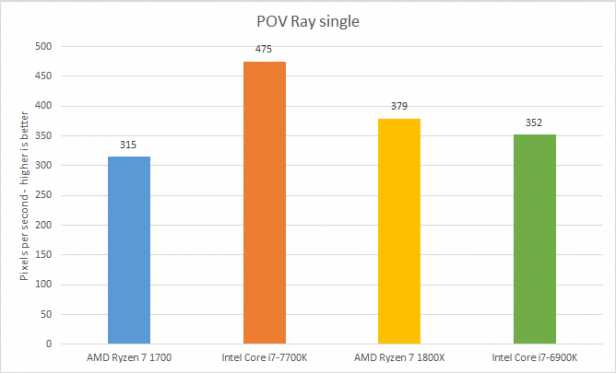 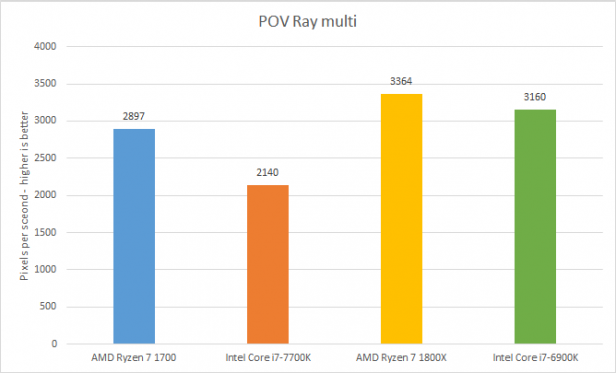 Moving on to a real-world example, using the Handbrake video-conversion tool to change a 1080p video to 720p, the 1700 managed this in just 81 seconds, while the 7700K took 95 seconds. The faster-clocked 1800X took just 70 seconds. The results were far closer in this test, but it’s a relatively short and simple transcode operation so doesn’t fully tax the CPU for long. 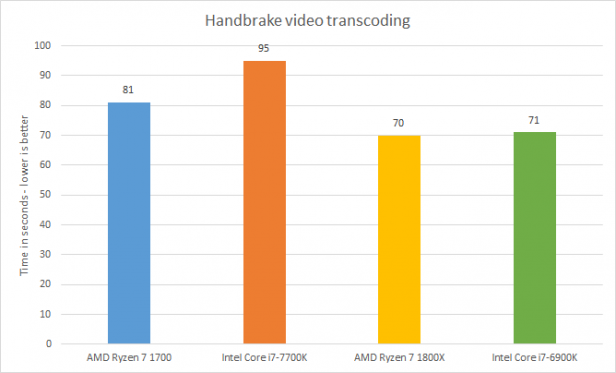 Overall, the picture really is as clear as the two processor’s specs would suggests. If you have £330 to spend on a CPU, the 7700K is far better for single-threaded applications and the 1700 for multi-threaded tasks.

In terms of gaming, it’s here we really see the advantage of the extra clock speed of the 7700K and also that single-threaded speed isn’t necessarily an advantage.

Starting with the least challenging test for CPU usage, The Witcher 3 is the most representative game of our tests when it comes to modern, graphically rich FPS/RPG titles. At 1080p with detail set to Medium and at 1440p with detail set to Ultra, all our test CPUs are limited by graphics card speed so provide identical performance. 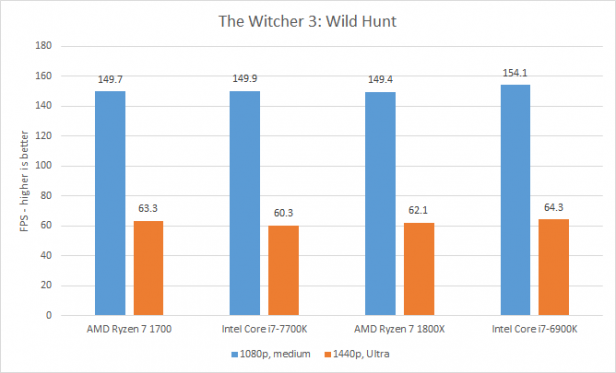 However, as we switch to a more CPU-intensive title such as Battlefield 1, we see two things. First, that this game is just generally better-optimised to run on Intel processors, as demonstrated by the 6900K being faster than the 1800X. Hopefully, this will be addressed with an update.

For the 1800X there’s no difference at 1440p with Ultra detail settings, since its speed still results in the GPU being the bottleneck. But the Ryzen 7 1700’s clock speed is slow enough that it shows a noticeable drop in performance, even at these settings. 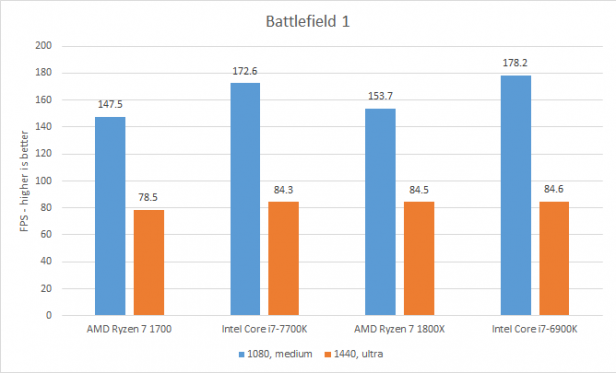 At 1080p and medium detail settings the Intel chips really pull away. Again, a good portion of this is the game being poorly optimised for the AMD processors, but clearly there remains an advantage with higher clock speed. Although it’s interesting to note that the much faster clock speed of the 7700K over the 6900K was of little benefit. Instead, the game seemed to prefer the extra cores of Intel’s eight-core processor.

Finally, we come to Ashes of the Singularity, a game that has hundreds of units on screen at once, making for a stern test for CPUs. Again, the picture was similar, with the higher-detail, higher-resolution scenario resulting in consistently GPU-limited performance across all the test CPUs. In fact, the 1700 came out fastest. 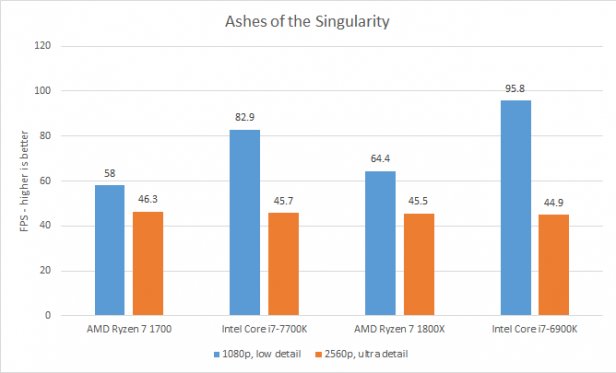 However, at 1080p with low detail settings, the 7700K and 6900K pull out big leads. Again, this game appears to be optimised for Intel processors and it’s likely that an update will bring better performance for AMD’s chips. Right here and now, however, if you’re prioritising frame rate over graphical fidelity then Intel is your best bet.

We expected the Ryzen 7 1700 to offer impressive power consumption figures given its low TDP, but its rate of power-sipping was remarkable. With power measurements taken for the whole system at the wall, the 1700 consumed just 113W when under load, compared to the 7700K’s 112W. For an eight-core chip in the process of delivering 42% faster performance that’s highly impressive.

At idle there’s little to choose between them, although technically the 7700K takes the victory. 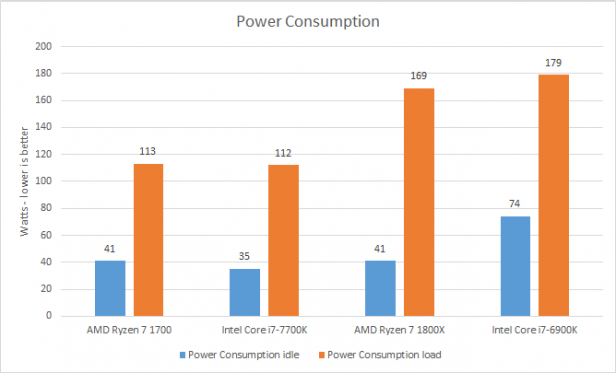 In some ways, it’s the chip’s overclocking potential that is its make-or-break moment. For those who consider its single-threaded performance just a little too low, the ability to easily boost this could tip the balance in its favour.

Sure enough, our review sample overclocked quite well, reaching 3.9GHz with only a little extra voltage. This resulted in a leap of 16% and 19% in single- and multi-threaded performance, putting it essentially at the same level as the 1800X.

The downside is power consumption. This leapt from 113W to 193W when under load. This remains close enough to the default levels of the 1800X and 6900K to be reasonable, but that is a massive increase.

What’s more, while I managed to push the CPU one step further to 4.0GHz before the system began to becoe unstable, the extra performance was minimal while power consumption jumped up even more, to 228W.

Then there’s the fact that the 7700K, too, is easy to overclock. It can be pushed to 4.8GHz, opening up its performance advantage once again, with a jump in power consumption to only 152W. Although, notably, when overclocked the 1700 actually extended its advantage in multi-threaded performance. The 1700 hit 1666 while the 7700K managed only 1059 – that’s a 57% advantage. 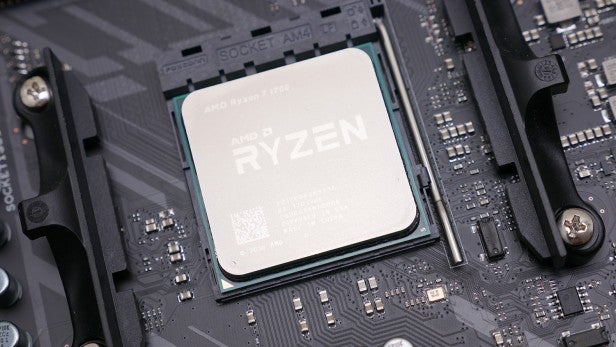 The Ryzen 7 1700 sits in a very odd position in the CPU market. On the one hand, it’s clearly the multi-threaded performance champion for its price, making it ideal for those for whom power is categorically the priority. However, its single-threaded performance trails far behind the Intel Core i7-7700K.

On the surface this suggests the 7700K is still the better buy for most home users and, in particular, gamers; most programs and games are still single-threaded (or only lightly multi-threaded).

However, in the real world there are actually very few single-threaded applications that would be slowed down by the Ryzen 7 1700. In fact, since all your day-to-day apps such as Outlook, Word, Chrome, Excel, iTunes and Dropbox use so little CPU power, to a certain degree it makes no difference which processor you have.

As such, there’s a strong case for saying that the Ryzen 7 1700 is the better option, even if you very rarely use heavily multi-threaded applications, simply because it will offer better performance when those really heavy-duty tasks come along.

This leaves gaming as the only crucial consideration for why you’d choose the faster-clocked 7700K, and it makes a very good case for itself. In short, the R7 1700 has toppled Intel for video editing at this price, but not for gaming.

For those who regularly run CPU-heavy tasks – such as video encoding, 3D rendering or decryption – on their PC, the Ryzen 7 1700 is the ideal CPU at its price. For the gaming-focused, however, the Intel Core i7-7700K remains the better choice.