In late 2015, AMD launched a completely new version of its graphics driver and graphics settings software. Out was AMD Catalyst and in was AMD Radeon Software Crimson Edition. The new driver, and in particular the AMD Settings interface for controlling it, was far quicker to load, largely more intuitive to use and just generally was a big improvement.

Over the last year AMD has been steadily improving that software, adding features such as the Wattman overclocking tool, but a year on from launch AMD thought it was time for another big launch, in the shape of AMD Radeon Software Crimson ReLive.

The headline feature here is the addition of in-built game capture and streaming, which had previously been handled by AMD Gaming Evolved that was essentially a rebranded version of Raptr’s software. There are several other changes too, so let’s take a deeper dive to see what’s new.

The new AMD Radeon Software Crimson driver is free to download and is compatible with all existing AMD graphics cards so you can go and try it today.

The single biggest new feature of the original Crimson software launch was the new AMD Settings app, which was quicker to install, faster to load (up to 10x faster) and far sleeker looking than the Catalyst Control Center of old.

This remains largely unchanged with the ReLive version, in terms of overall look and feel, but there are plenty of tweaks and new features in this latest update.

The most visually obvious change is the removal of the superfluous Eyefinity tab – it did nothing unless you had more than one monitor – to be replaced by the ReLive tab. Multi-monitor tweaking is now done via the Display section. 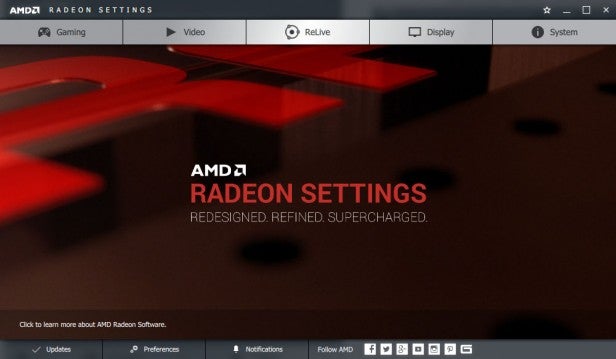 Dive into one of the sections and it fills the whole window – which can be resized and made fullscreen – presenting all the various options. Oddly, though, the main navigation buttons move from the top to the bottom when you enter each section, which we found a bit unintuitive.

This works quite well though isn’t perfect. For a start, it can sometimes be frustrating that you can’t find the setting you’re after because you haven’t turned on the parent setting that enables it. Also, the whole grid of rectangles that makes up each option is dynamic so you can resize the window and they all shuffle around and restack to fit.

Combined with the new blocks appearing for otherwise hidden options and the fact the blocks are in no obvious order (not alphabetical etc) and it can sometimes take quite a bit of scanning back and forth to find the option you’re after. 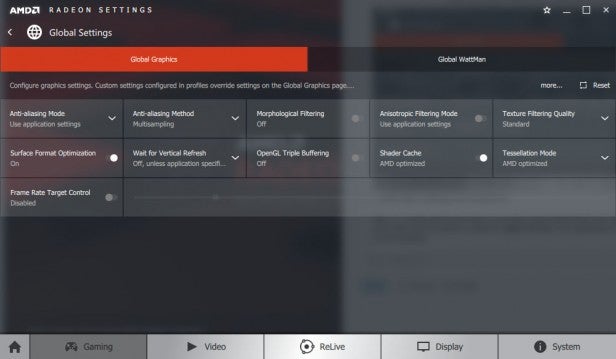 Some settings are hidden… 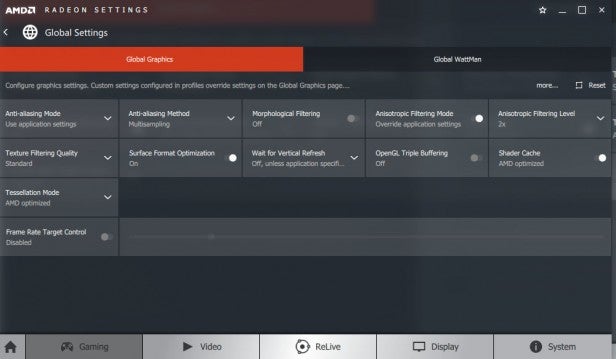 …until other settings are turned on.

Still, it’s mostly quick and easy to use and a big improvement over both Nvidia’s current driver and previous AMD drivers. We just wish there was an option to stop the AMD Settings icon appearing at the top of the context menu when you right click in a folder or on the desktop.

Hit the Gaming tab and you’re presented with what initially looks like just a list of your games. However, the top left tile is labelled global settings and its here that you can setup your preferred settings for whatever games you’re running.

If you then want to set specific options for certain games you can select the corresponding tile. This is a much more intuitive way of managing game specific settings than the previous CCC version and the driver does a good job of automatically detecting all the games you have installed. 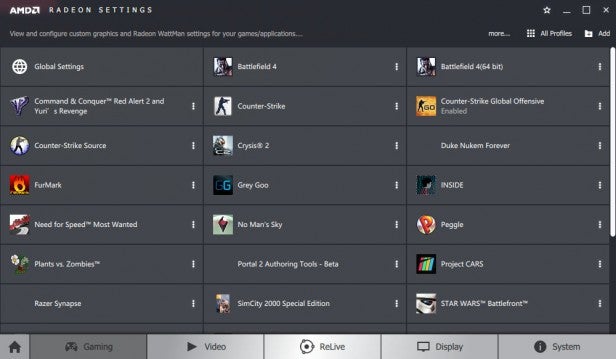 Jump into any of the game settings and you’re presented with essentially the same list of options as the global settings, with things like anti-aliasing, anisotropic filtering and tessellation mode on the left tab and the new WattMan overlocking settings on the right tab.

The latter is AMD’s graphics card overclocking tool that replaces AMD Overdrive. As well as having a far more clear layout, it’s also much more granular with a host of options for balancing performance, power consumption, noise and heat. 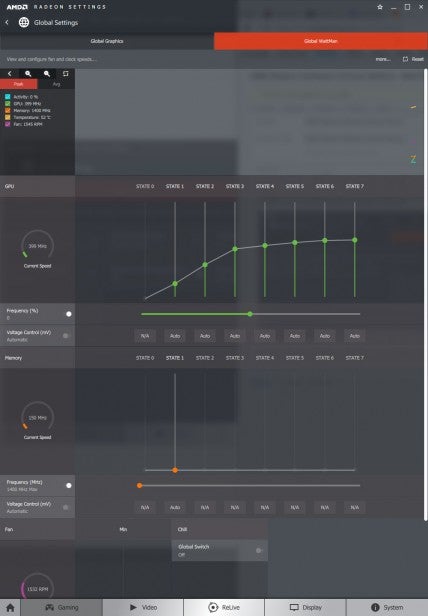 One of the features of WattMan is Chill. This is a new addition that allows your graphics card to reduce its performance during times of low on-screen activity. I.e. if you’re standing still or in a loading menu, the card will dynamically reduce its speed, saving power and reducing heat. It’s less of a concern for desktop users but could make for much better battery life on laptops.

Moving onto the Video tab and this is where you can tweak how your graphics card handles colour profiling and some video effects for making any video on your PC look its best.

You can quickly choose from a selection of presets that load what AMD thinks are the optimal set of features for films, sports and the like or hit Custom and you can choose for yourself which to load. 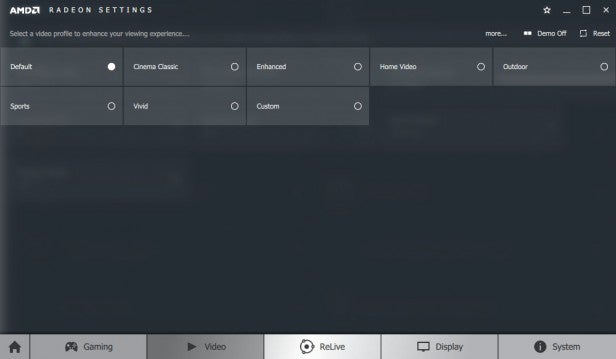 Most of the settings are ones that have been around for a while on existing versions of AMD drivers but one new feature is directional scaling, which is essentially anti-aliasing for video.

AMD is also highlighting reduced power consumption with Crimson when playing YouTube videos. That’s quite a specific scenario but a useful one nonetheless and in my tests I did record around a 20W reduction in power consumption when playing the same Star Wars The Force Awakens trailer AMD used in its tests. To highlight its specific nature, though, I also tested with VLC and saw no difference.

The big new feature of this release is ReLive. This is AMD’s new completely integrated live streaming and game capture facility that means you can do away with secondary software like AMD’s own Gaming Evolved app.

It’s a comprehensive setup for a first outing, with options for recording your gaming sessions manually or just recording instant replay clips. There are also plenty of settings for changing the quality of the video, including setting a specific resolution or going with the in-game resolution, choosing 30fps or 60fps and changing the bitrate. 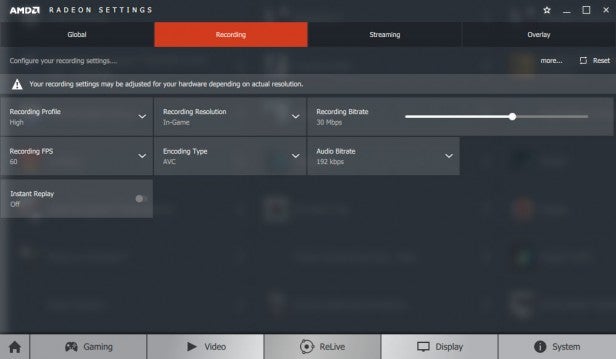 At the same time you can also stream straight to Twitch, YouTube or a custom server. Again you get plenty of options for tweaking quality and you can choose whether to archive the stream.

AMD claims only a 3-4% performance hit from enabling game capture, though this will depend on your exact hardware configuration. During our tests it didn’t noticeably affect our framerate or responsiveness.

You can also add an overlay to your stream or recording that can include system information, and a camera feed as well as include a custom overlay image. 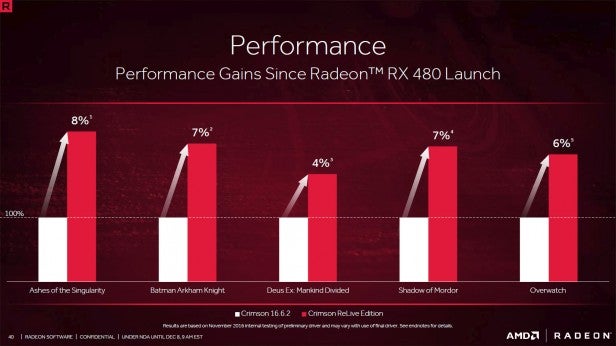 All told, it’s a great addition both for its comprehensive and easy to use interface and the fact that it means you have one less bit of software to install.

It remains to be seen how this will work in conjunction with the upcoming game capture feature that’s being built into the Windows 10 Anniversary update but for now it works well.

Under the Display settings tab is a key new feature of Radeon Software Crimson, which is the ability to use custom resolutions and framerates, rather than having to choose from a list of verified supported resolutions.

This can potentially cause problems for your monitor so AMD makes you agree to a waiver before accessing the option, but once opened you can pick from a large range of monitor options, even including detailed timing settings. This feature has also now been fully updated to run within the Crimson interface, where earlier versions of the software opened an instance of CCC to change these settings. 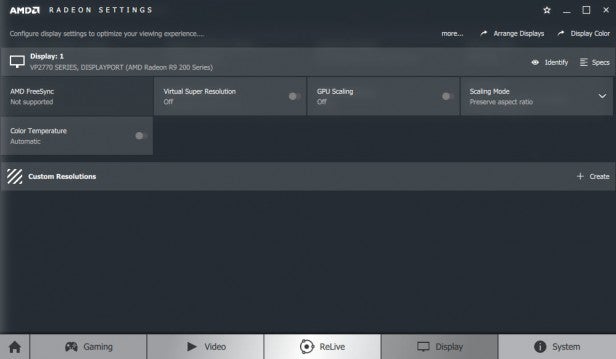 Otherwise, it’s here you’ll find options for enabling AMD Freesync, virtual super resolution (this makes everything on screen smaller as you try to emulate your monitor having a larger resolution), GPU scaling and a new colour temperature setting. The latter provides a quick way of manually tweaking how red or blue your display looks, with the default option set to the standard 6500K temperature.

If you have multiple monitors it’s here you can set them up with the usual Eyefinity options.

The System tab is where you find all the information about your graphics card hardware and AMD software. So if you ever need to look up your driver version or find out how much graphics memory you have, it’s the place to go.

As well as the Radeon Settings app, there are some key under-the-hood features in Crimson, one of which is Shader Cache.

This works by storing the compiled shaders needed for the game on the hard drive. Normally these shaders are compiled on the fly, which can lead to pauses in open world games as you move around the map, as well as other micro-stutters and generally longer game and level loading times. Shader Cache aims to reduce all these issues.

Enabled by default it will take at least one run of each game for the cache to be filled and any benefits to be realised but thereafter the game and levels should load quicker, plus there should be reduced stutter from CPU overhead and from “map hitching”.

However, in my testing I didn’t notice any difference in game and level loading times using Battlefield 4. By its nature this isn’t the easiest thing to test, though, as it will vary greatly from game to game and even machine to machine. 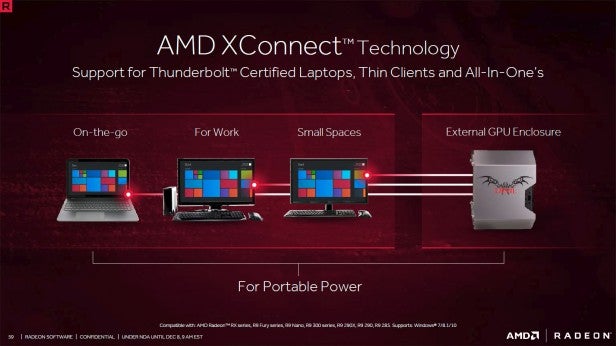 However, the feature has been available on Nvidia cards/drivers for a while now and in general there’s a modest but welcome reduction in these issues when the setting is enabled so it’s reasonable to expect the same improvement for AMD cards.

Another new addition is wider AMD XConnect support. XConnect is the ThunderBolt-based technology for connecting a laptop of all-in-one PC to an external graphics card to boost graphics perforamnce, and previously it was something that only worked with specific hardware and specific driver versions.

Now, though, AMD XConnect is supported across all Thunderbolt certified PCs and laptops and external graphics solutions. We’re yet to test this out though, so the jury is still out on whether the holy grail of portable gaming is truly a viable option yet. 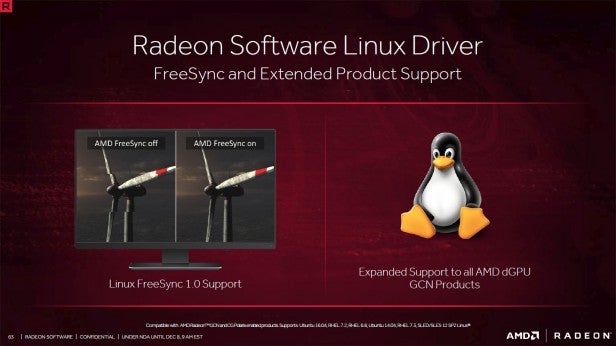 AMD is also expanding its Linux support. Freesync is now supported as well as all discrete GCN graphics cards – that’s basically everything since the HD 7000 series.

Overall, AMD appears to have once again made a significant enough update to its driver and software to justify the fanfare it has tried to whip up around AMD Crimson ReLive. AMD Crimson was a big improvement in speed and ease of use and now the ReLive edition adds useful new functionality and further improves the usability. In the end it’s just a free driver update but we think AMD is definitely doing a good job of making it quicker and easier for users to make the very most of everything their graphics cards has to offer.