AMD just launched a pair of dual-core Socket AM2+ processors, which may sound like dull news in these days of quad-core CPU power but stick with us as there’s a tale worth telling…


We last reviewed a dual core Athlon 64 X2 more than a year ago. This was a 3.2GHz 6400+ model built on a 90nm fabrication process and it drew 1.4V to break the 3GHz mark with the result that it had a TDP of 125W – that’s horribly toasty for a relatively lowly dual-core processor. To make matters worse it was clear that AMD’s K8 technology was at its limits as the potential for overclocking was non-existent.


So here we are with a new dual-core processor but it has very little in common with the Athlon 64 X2 as it is built on Phenom technology. In effect this makes Athlon X2 a continuation of the Phenom series but instead of calling the new processor Phenom X2 AMD has chosen to continue the well established Athlon name, though the ’64’ suffix of previous Athlons has now disappeared.


Names are relatively trivial but the hardware is important and the specification of Athlon X2 owes everything to Phenom. The transistor count has climbed to 450 million, just like the Phenom X3 8750 we used as a comparison in our testing, and the TDP is also the same, at 95W. 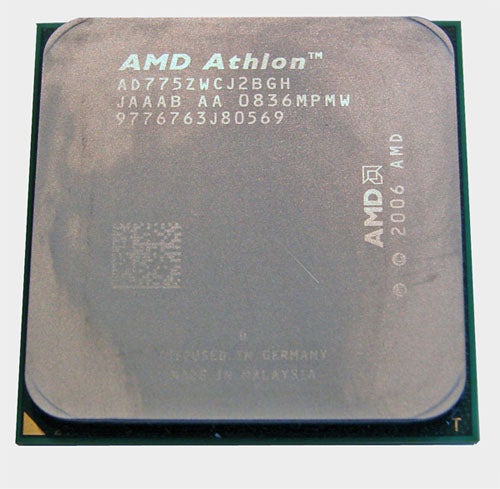 The Athlon X2 7750 Black Edition has a clock speed of 2.7GHz and sells for around £80inc VAT while the 2.5GHz Athlon X2 7550 is an OEM model that will end up inside budget PCs. There is 512KB of L2 cache per core for a total of 1MB (as this is a dual core processor) and there’s also an extra layer of cache, aptly named L3. There’s 2MB of this which is shared across both cores.


These new Athlon X2s also use the faster HyperTransport 3.0 connection found in Phenom with a maximum clock speed of 1.8GHz in each direction, instead of the 1GHz speed of Athlon 64. This enables a potential 41.5GB/s of bandwidth, which is double that of the outgoing Athlon 64 X2s.

It is impossible to tell whether AMD has disabled functioning cores to convert a Phenom X4 or X3 to arrive at Athlon X2, whether it is making the most of faulty Phenom cores that are otherwise headed for the scrap heap, or if it’s a dedicated dual-core design.

Head over to AMD’s website and you’ll see that the new Athlon X2 7550 and 7750 have appeared on the list. It is also noticeable that the 125W TDP Athlon 64 X2 6400+ has vanished from the range although the 6000+ model and its slower variants are present and correct.


We tested the Athlon X2 7750 on an MSI DKA790GX Platinum motherboard which has integrated Radeon HD 3300 graphics so we were able to concentrate on the performance of the processor without getting distracted by our choice of graphics cards.


The upshot is that the Athlon X2 7750 had very similar performance to Phenom X3 8750 in PCMark05 so we can conclude that 2 x fast core = 3 x fairly fast core, at least in some applications. In a dedicated processor test such as POV-Ray the triple cores in Phenom X3 wipe the floor with Athlon X2. In our experience most software isn’t threaded to take advantage of anything more than a dual core processor which puts the emphasis on raw clock speed and the Athlon X2 has that in spades. 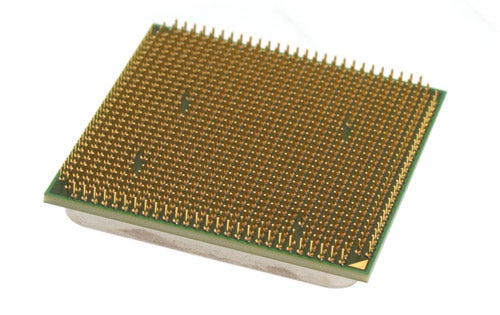 When it comes to overclocking the Phenom X3 8750 we could raise the base clock from 200MHz to 230MHz to give a speed of 2.76GHz. With Athlon X2 we were able to increase the clock multiplier of this Black Edition processor and zipped up to 3.2GHz without any trouble.

The real surprise lies in the power draw figures as the overclocked Phenom X3 required an extra 30W under load while the Athlon X2 only wanted an extra 5W. As the idle figure in the Windows desktop appeared to drop by 5W we have to say that both figures are within the margin of error so overclocking an Athlon X2 doesn’t appear to require any extra power.


Faced with a straight choice of the Athlon X2 7750 at £80 or Phenom X3 8750 at £105 we would choose the dual core model any day of the week but of course we need to consider how AMD stacks up against Intel.


We grabbed the figures from our review of the Intel DG45ID motherboard that was tested with a Core 2 Duo E8500 processor that runs at 3.16GHz. This is a relatively expensive processor that currently sells for £155 however the Intel graphics on the DG45ID are feeble compared to the AMD HD 3300 so you have to read the figures carefully and look at the PCMark05 CPU figure rather than the Overall score. This shows that the Athlon X2 compares very favourably to Core 2 Duo although it has to be remembered that you can overclock the E8500 to 4GHz without difficulty.


A 2.66GHz Core 2 Duo E7300 that costs £97 may have given a better comparison to the Athlon X2 however we don’t have one to hand. That forces us to take an educated guess that the 2.7GHz Athlon X2 has the edge over a comparable Core 2 at stock speeds. Once the processors are overclocked the Intel processor should pull ahead slightly but honestly it’s a tiny margin, unlike the price difference.


With its Athlon X2 7750, AMD’s processor division seems finally to be at least close to the track if not back on it. This dual-core CPU brings the technical advancements of the Phenom range to a cheaper, lower price and lower power package and compares well with the competition from Intel. It’s not an outright winner but it’s certainly one to consider.