While Intel is very much the market leader, when it comes to discerning gamers, AMD’s Athlon FX-55 is the processor of choice. But with Intel’s 3.8GHz Pentium 4 670 snapping at its heels AMD has launched the Athlon 64 FX-57. This speed bump, from the 2.6GHz of the FX-55 to 2.8GHz, is a new megahertz high for AMD and has been done in order to keep Intel at bay so that it can still boast that it makes the fastest desktop processor.


Take a quick glance at the spec table and you’ll see that there have been some changes under the bonnet. The core of the FX-57 is the 90nm San Diego rather than the 130nm Clawhammer used for the FX-53 and FX-55, although you’ll also find some San Diego FX-55 processors on sale. San Diego is also used in the Athlon 64 3700+ and 4000+ models which have 1MB of L2 cache compared to the 512KB of the Venice core that is currently flavour of the month. Both Venice and San Diego use a silicon-on-insulator process and support the SSE3 instruction set. Intel has long led the way with SSE and while it seems to bring minimal benefit in the real world it can’t do AMD any harm to add this feature to its processors.


San Diego has an enhanced memory controller – it’s in the core with AMD processors, rather than in the chipset – so if you use four memory modules you should now find that they run at the correct speed. In the past some unfortunates have found that their PC3200 memory would mysteriously clock down to 333MHz if the controller got over-worked. 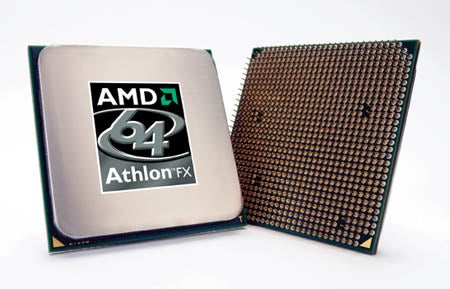 The main selling point of an FX processor is the unlocked clock multiplier, and if you delve into the tech specs a bit further you’ll see that this presumption that there will be overclocking has a significant impact on the power rating of the FX. The 3700+ and 4000+ San Diegos have an operating voltage of 1.5V and a TDP (Thermal Design Power) of 89 Watts so it doesn’t take much in the way of maths to see that the maximum current draw is 57.4 Amps, which is why AMD casually refers to the Athlon 64 as a 50 Amp part.


The FX-55 also runs on a 1.5V core voltage but the power rating is higher at 104 Watts, giving a current requirement of 69.3 Amps, and now we have the new San Diego FX-57 with a core voltage that has dropped to 1.4 Volts yet it has the same TDP of 104Watts as FX-55 which we calculate is a maximum current draw of 74 Amps although the official rating is 74.9 Amps. In conversation, AMD refers to FX-57 as an 80 Amp part, which is a huge amount of current for a motherboard to channel and the 104 Watts rating means that you need to use a beefy heatsink with the FX-57 with a heatpipe arrangement to get the heat away from the processor as fast as possible. A heatsink, indeed, just like the Thermaltake unit in the Press kit that AMD supplied for the FX57 review, with an Asus A8N nForce4 SLI motherboard and 1GB of Corsair CMX512 memory.


Naturally we tried to use the overclocking features that Asus includes in the BIOS. You select a military rank that sounds appealing and the BIOS does all the hard work for you, in theory at least. Starting with the Colonel setting +7% = 2996MHz the PC froze in a matter of moments. Next we tried the Captain setting +5% = 2940MHz which suffered a similar fate and then we opted for the Sergeant setting +3% = 2891MHz which also froze but took a little longer to do so. 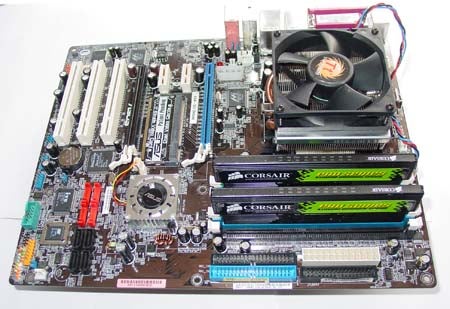 So the overclocking was a complete non-starter which is a bit of a shame but as the Asus A8N had a Beta BIOS installed we think it’s safe to point the finger of blame in that direction. Obviously though, we aren’t in a position to say how much the FX-57 will overclock when the BIOS is sorted out or how it will behave on other motherboards, but that all lies in the future.


So you want an FX-57 and we can’t blame you or more likely you’re now rubbing your hands in anticipation of buying an FX-55 after the inevitable price cut. Up to now, AMD has had a policy that only one model of FX processor would be available at any time. But that’s about to change and while the FX-57 will go on sale at $1,031/1,000 the FX-55 will continue to sell at its official price of $827/1,000 which translates to £590 including VAT in the UK.


But look at that price again. Overclockers.com already has the FX-57 listed at £764 inc VAT, which is the sort of money that some people pay for a car or a holiday. Not necessarily a good car or a good holiday of course, but we’re talking about a serious amount of cash for a single processor with just the one core.


AMD is absolutely clear that the FX-57 is ideal for the gamer who is only concerned with getting the ultimate in performance but we’re not so sure. For one thing there’s the practical consideration of the upgrade path. The FX-51 and FX-53 started off on Socket 940 before the FX platform moved to Socket 939 so the people who would gain the most from an upgrade will have to buy a new motherboard, as well as non-ECC memory. And if you’re running an FX-55 on a recent Socket 939 motherboard then you’ll have to check that your motherboard will support the FX-57. Even then, the improvement will be relatively small and if you’re running a slow Athlon 64 then where on earth did you suddenly find the £800 to blow on a bit of silicon?

Then we have the whole dual-core thing to consider. AMD considers that gamers want an FX as it is as fast as heck while regular desktop users should be heading down the dual core route for multi-tasking. You can see the logic; gamers have one task viz their game and the rest of us have many tasks. Well Riyad and I disagree strongly with AMD on this one and here’s why. Everyone who is even vaguely considering the purchase of an FX processor will have Broadband so they should also be running antivirus software and will probably have a Firewall running, although that may be handled by a router in hardware. If you don’t have Broadband but instead are running an FX on 56Kb dial-up then we want to hear from you, just so we can poke fun and be rude.


So you’ve got antivirus software running and you’re playing a game, perhaps in single player or perhaps on-line. That’s two tasks and possibly three, and we’re not counting all of the software on your PC that habitually checks back to the mothership for updates. So what you want isn’t an FX-57. Oh no, you want the cheaper, better alternative of the Athlon 64 X2 4800+ which is a mere £752 inc VAT. Technically it’s a slower processor but in the real world the X2 will deliver better performance that won’t leave you shrieking in frustration when one core is hammering away at 100%.


We like the FX-57, really we do, but we wouldn’t buy one because a) it’s insanely expensive and b) we’ve been converted to the true way of the dual-core processor.