At the end of 2005 AMD had a superb range of desktop processors but there was a serious anomaly right at the top of the range. The £740 Athlon 64 FX-57 was supposed to be the performance king, and if you looked at isolated benchmarks it was the fastest processor in AMD’s range, however the dual core £560 Athlon 64 X2 4800+ was clearly a better processor for most PC users.


This makes an upgrade to FX-60 just about as simple as it could be. Any motherboard and cooler that works with FX-57 is sure to work with FX-60.

During our testing we plugged the FX-60 into five different Socket 939 motherboards and it ran perfectly on four of them. This was three weeks before the processor was released so it is highly unlikely that the BIOS revisions were specific to the processor. The motherboard that gave problems was a Micro-ATX model with integrated graphics which is highly unlikely to be used in conjunction with an FX-60 in the real world.


We also ran the FX-60 with a selection of memory (Corsair XMS 3200, Kingston KHX4000, Kingston KHX4300 and Buffalo Firestix FSX500DV) to see if there were any obvious compatibility problems but the FX-60 behaved itself perfectly. Common sense says that the two 2.6GHz cores in the FX-60 will be more effective than the single 2.8GHz core in the FX-57 but the 200MHz drop in core speed leaves a small question mark hanging over the FX60 that can only be resolved by a few tests.


For our tests we used the Asus A8N32-SLI Deluxe motherboard with Forceware 6.82 drivers, a Radeon X850XT graphics card with Catalyst 5.12 drivers, a WD740 Raptor hard drive and 1GB of Kingston KHX4300 memory. We installed Windows XP SP2 and ran 3DMark05, PCMark05, POV-Ray and a homebrewed test where we encoded an hour of a TV show into MPEG2.

We started to use POV-Ray quite recently as it stresses the CPU severely and the latest Beta version allows you to run a test that is either single or multi-threaded. This has been very useful to show the worth of a dual core processor over a single core processor but it’s not exactly a real-world test. For that we took a one hour TV show that was encoded with DivX to give a file size of 715MB and then transcoded it to DVD using Nero 7.0.1.4. If you’ve ever downloaded a TV show from one of the peer-to-peer networks and want to watch it on your TV you’ll know that this is a quick and simple approach but the transcoding can take an hour on a decent PC. 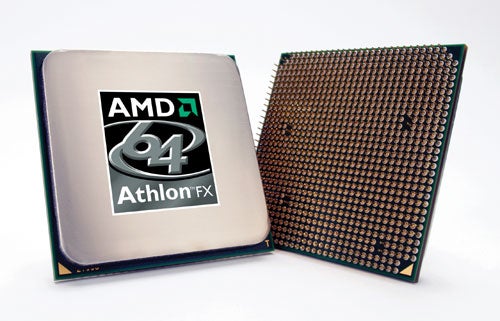 3DMark05 gave similar results across the board as you would expect as it tests the graphics card and memory system, rather than the processor. PCMark certainly favoured the dual core processors and the FX-57 trailed X2 4800+ and the 955XE by 20 per cent, while the FX-60 came out on top by a healthy six per cent.


In the single threaded POV-Ray test the results went with processor clock speed, but in the ‘All CPUs’ test the FX-57 just looked silly while the 955XE with its four virtual cores cleaned the floor with the X2 4800+ and FX-60.


Our video encoding test painted a very different picture, and while the FX-57 still looked like a slowcoach, the Intel processor lost out heavily to the dual core AMD processors, while the FX-60 was nine per cent faster than the X2 4800+ which is exactly what you would expect from their respective clock speeds.


The conclusion is quite simple. Athlon 64 FX-60 is a missile of a processor and if you thought it was worth the cash to buy one of the previous models of FX then you should place your order for an FX-60 now. However, if you currently own an Athlon 64 X2, while there’s no doubt that the FX-60 will be an improvement, it would be hard to justify the asking price.