The Fire Phone’s unique selling point comes not from its solid, yet bog-standard, design, nor its adequate screen technology. It’s all in the software, the custom user interface and the way it all ties in with the phone’s front-facing motion sensors.

The phone runs on Android but, like the Kindle Fire, it’s not something you’ll necessarily recognise as being a Google device.  The Fire OS 3.5 is a completely forked version of the operating system, with a completely custom user interface. 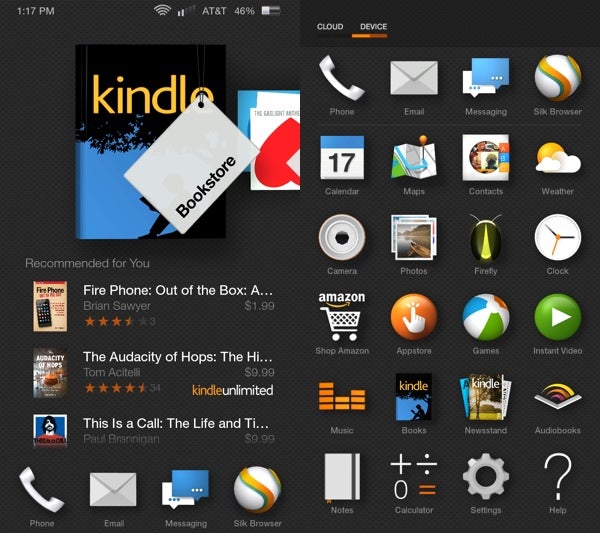 A carousel and app drawer

The unique experience begins on the home page, with the carousel of recently-used applications that allows users to scan left and right through their recent activity without delving through app menus.

One of the key advantages of this is the ability to select, for example, an email from that portion of the carousel without heading into the Email application first. Items like your recently viewed products on Amazon or recently taken photos can also be opened in this manner.

For example, within the Prime Instant Video app, it’ll bring up recommendations, while the Calendar app will show upcoming appointments. If you’re shopping (as Amazon hopes you will be) it’ll showcase items other viewers frequently bought. 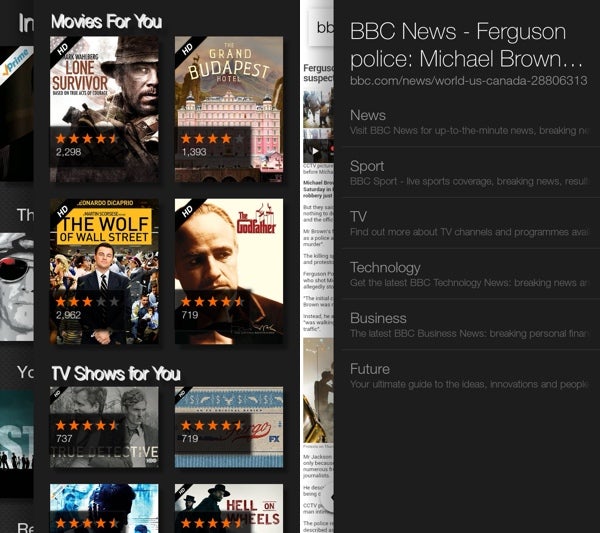 When using the Silk Browser, the right panel shows sections for the website you’re visiting (BBC shows news, sport, etc.), but perhaps the most useful integration is within messages, where a right tilt will reveal photos that can be easily attached with a single tap.

However, what really makes this unique is the Dynamic Perspective tool that allows users to access these menus with tilting gestures rather than manual swipes. This is all made possible thanks to those four motion sensing cameras.

Amazon made a lot out of this when revealing the device and with good reason. A tilt to the left will always open the left menu, while a tilt back to the right will close it. The same goes for the right menu. 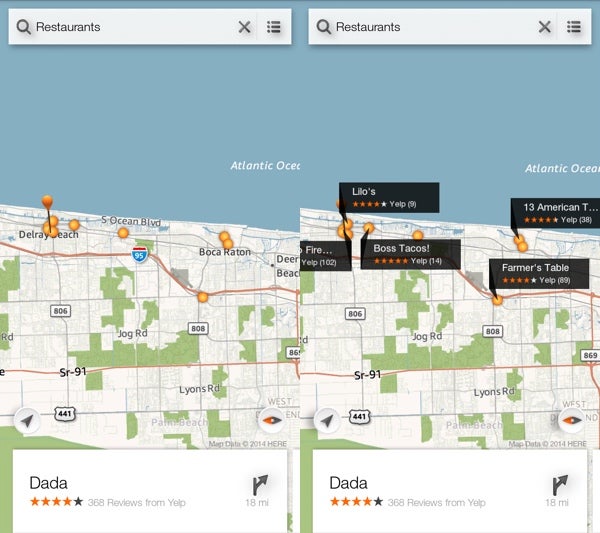 Maps app without (left) and with (right) Peek activated

It has also integrated another innovation called Peek, which allows you to glean further information about an item or object just by tilting the device slightly. For example, in the Photos app enabling Peek will show when the pics were snapped and in Maps (see above), it’ll reveal the name of businesses and their Yelp score.

The idea is to make the phone easier to use with one hand and, although it takes a little getting used to, it works pretty well. Initially we found ourselves moving our heads to compensate for the display tilt.

Peek and Tilt are augmented by an auto-scroll feature that allows users to tilt the phone backwards to move through a book or web page. It’s quite sensitive and takes a little mastering but works well and plays into that simple, one-handed experience Amazon is going for.

The rest of the UI is straightforward enough. A quick swipe up compensates for the lack of a back button, swiping up from the docked app icons launches the app menu, while dragging down from the top of the screen reveals recent notifications and quick settings like Wi-Fi, display brightness, Bluetooth, etc. 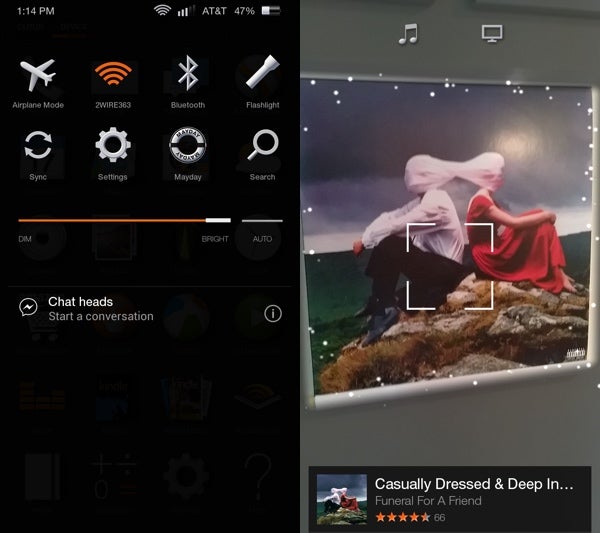 It also features quick access to Amazon’s MayDay customer service tool, which connects you to a representative via a video call. As Brits this seems way too forward, awkward and scary to ever use. Besides, whomever you get is going to be far less interesting than the flirty redhead Amazon portrays in its ads.

Speaking of assistants, the Amazon Phone has a Siri-like personal assistant, which allows users to hold down the home button and speak to make calls, send emails and set appointments, etc. Unfortunately, it works while the display is locked and we triggered it while the device was in our pockets multiple times.

Notifications need some work, too. Often you’ll receive an alert, but the Fire Phone doesn’t do a very good job of allowing users to see where and whom it was from. An email, message and missed call icon shows up on the lock screen, but otherwise you have to go searching. 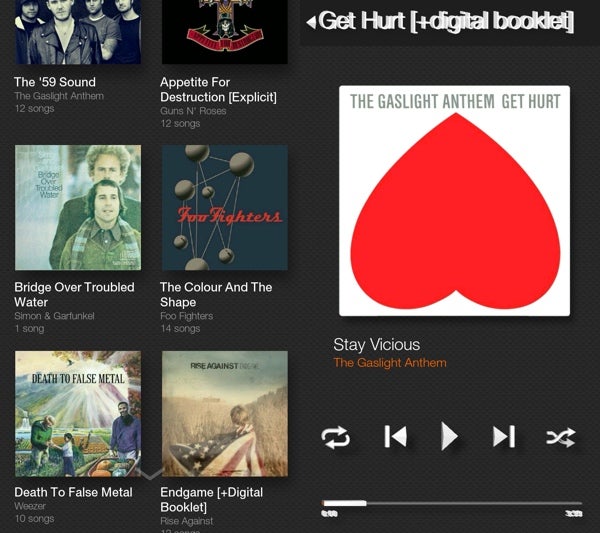 All in all, though, a few quibbles aside, it’s a neat effort from Amazon that helps the Fire Phone stand alone from the rest of the smartphone crowd. However you should be under no illusions. This phone and its interface is here for one reason: For you to continue parting with your cash after you’ve parted with your cash. Amazon itself admits the Fire Phone is for its “most engaged customers” and the experience plays out as such.

Upon first testing the Fire Phone
we were a little perturbed by its sluggish performance, compared with
some of the hotter handsets on the market. It just seemed a little
sticky.

Anyway, our fears were soon resolved by an
out-of-the-box software update to v3.5.1, which saw performance improve
significantly. And so it should. The device is running the quad-core
Qualcomm Snapdragon 800 processor, clocked at 2.2GHz, which keeps things
moving along at a fair old clip. It also has 2GB of RAM, ensuring
multi-tasking is handled easily and those Dynamic gestures work in time
with your tilts and twists.

The graphics are handled by the
more-than-capable Adreno 330 chip, helping to keep those dynamic,
interactive lock screen wallpapers looking sweet. All-in-all we were
impressed with the performance of the phone as apps never lagged or
crashed. It does tend to run a little warm during heavy use, though. 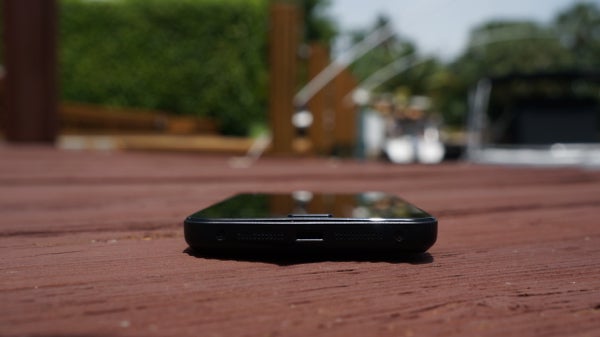 Very
early on you realise the soul purpose of the Fire Phone is to lock you
into the Amazon ecosystem. The Dynamic Perspective tool is perfectly
tailored to chilled-out shopping through the Amazon.com app. A quick
flip here, a slight tilt to reveal photos of an item in full screen, a
quick swipe to return to the previous page… it’s effortless. Indeed the
Left homescreen menu is absolutely loaded with quick access to Amazon’s
portals like Kindle books, Newstand magazines, the App Store, Games,
Documents and more.

It’s an Android phone, but not as we know it.

With
that in mind, those buying this phone must accept that few of the
benefits of Android are available. There’s no Google Made apps, for a
start. No Google Now, no Hangouts, no Maps, no YouTube, no Gmail, no
Google Camera interface, no Google Drive and so on. Amazon has its own
versions of many of these and Amazon Maps is perfectly adequate, but
there’s no real replacement for something like YouTube.

However,
despite the lack of Google apps, most of the other big third-party
hitters are available via the Amazon App Store. There’s Facebook,
Twitter, Instagram, Spotify, Skype, WhatsApp, Netflix, Tumblr, Vine,
Evernote, you name it. Naturally, the store isn’t quite as populated as
the Google Play Store or the Apple App Store, but it’s by no means
bereft of big name apps.

In terms of games, you’ll be able to
play the likes of Candy Crush Saga, Cut the Rope 2, Minecraft, Angry
Birds, Temple Run and Plants vs Zombies, but the catalogue is certainly,
shall we say, less dense.