The best kids' tablet so far – although it isn't without its faults. Namely software compatibility troubles and the mediocre hardware underneath.

What is the Amazon Fire HD 8 Kids Edition?

Amazon’s Fire HD 8 Kids Edition is the medial entry in the company’s Kids Edition tablets. Like its siblings it centres around one of Amazon’s affordable tablets but comes with a drop-proof rubber case and a year’s subscription to the Fire for Kids service, offering access to a host of child-friendly content as part of the package. 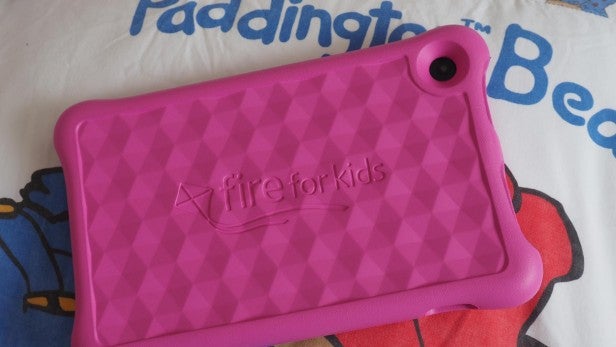 The Amazon Fire HD 8 tablet serves as the foundation of this particular Kids Edition experience; it’s a cheap and cheerful 8-inch slate that’s locked into Amazon’s Fire OS, which means to Google Play store or other Google services.

With the tablet comes a sizeable Kids Edition case — available in yellow, pink or blue — that alters the tablet’s dimensions considerably. It turns the tab into a far heavier, chunkier package but as such, benefits from greater grip with better hands-holds and the ability to withstand being flung across a room after a particularly nasty slushie-filled tantrum.

Just as with the other Kids Edition tablets, with the case on I’m reminded of a steering wheel. The case is finished with some light texturing too, meaning it’s less likely to slip out of chocolate-smeared fingers. It also ensures a tight fit around the HD 8 so there’s little to zero chance of it simply falling out during use. 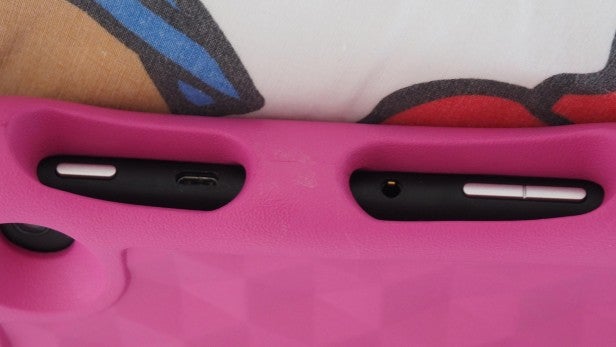 The case also features cut-outs for the rear camera, the power button and volume rocker, the stereo speakers running along the bottom edge and the tablet’s microUSB power port.

What the Kids Edition lacks in terms of accessories is a screen protector. The case does a good job of keeping the tablet’s display out of harm’s way most of the time but there’s still the risk of direct impact against the likes of a pointy wooden toy or something. Considering the extra cost over the standard Fire HD 8, this omission is not only surprising but a touch disappointing. At least Amazon includes a no-fuss two-year warranty with the HD 8 Kids Edition.

Another thing I’d still like to see is some form of kickstand, enabling the tablet to be stood on a table or floor. The EE Robin managed it via a neat folding carry handle, and I’d hope Amazon will try something similar in the future. 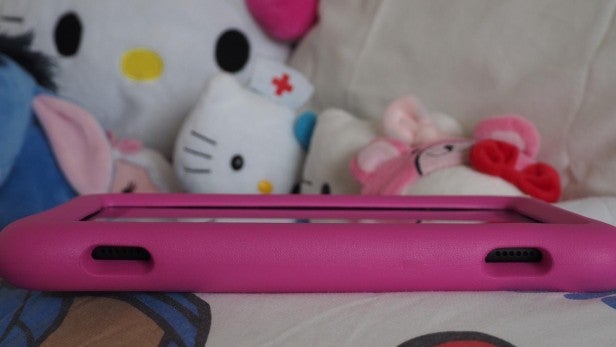 The HD 8 Kids Edition comes with the top-tier 32GB of storage, which is handy for downloading all those apps your children will probably eat through. A microSD slot means you can even ramp up space to 256GB.

The final extra that you pay a premium for is the Fire for Kids app and one year’s free subscription to the service. This offers a child-friendly overlay with a load of useful parental controls and access to a ton of tailored content covering videos, games and ebooks.

As was said in our review of the standard HD 8, there’s plenty to like about Amazon’s tablet but also a lot it could do better.

The 8-inch IPS display, for instance, is quite reflective and lacks contrast. It does go quite bright, though, so at least you can try to combat those reflections if it’s used outdoors.

Performance from the MediaTek processor and 2GB of RAM isn’t scintillating but it’s good enough for the simple apps and video streaming that will keep your little ones glued to the screen.

The cameras – a 2-megapixel unit on the rear and VGA for the front – are both fairly awful by today’s smartphone standards, but again they’ll be decent enough to let your kids mess around with. It isn’t like they’ll be Instagramming their Alphabetti Spaghetti, is it?

The 12-hour battery life is pretty impressive, however.

Amazon’s operating system, Fire OS, is Android-based but not Android as you know it. That means you can get most of the major Android apps for Fire OS, including Netflix and the CBeebies apps, but you can’t get Sky Q or Sky Kids, for instance. You’ve been warned. 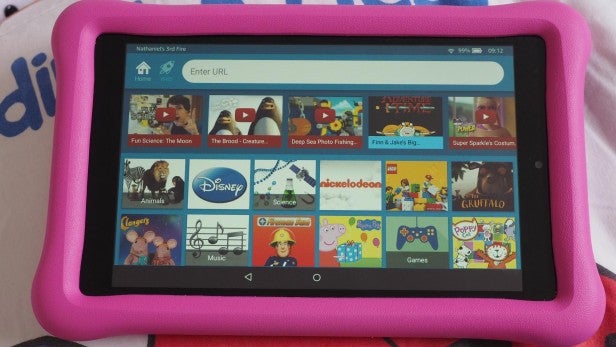 And now to the real meat: that one-year subscription to the Fire for Kids service. It’s basically a simplified UI that overlays Fire OS and provides access to masses of age-appropriate content.

You open Fire for Kids just like any other app, and it gives you the option to add profiles for each of the children who will be using the tablet. Just give them a name, age, gender and profile pic. You can also decide whether to assign them a standard Fire for Kids account or give them a Teen Profile, for children aged 11 and older. I’ll admit I couldn’t spot much difference between the two.

With your child signed in, they have a choice of content type: Books, Videos, Apps, Characters, and (if you’ve enabled permission) Web. They can also search by title or use the camera. All of the categories are crammed with content, and you’ll even recognise most of it – these are mostly well-known brands rather than cheap filler.

Browsing by character reveals plenty of familiar faces: Harry Potter, Thomas the Tank Engine, Fireman Sam, Postman Pat, Gruffalo and a load more, as well as sub-categories such as Dinosaurs, Trains, Princesses, Sports and Superheroes, to name just a few.

There doesn’t seem to be any real structure to the category lists, however, so something like Videos can be a bit overwhelming. Or, rather, you might find your kids never even spot that there’s something in there they would have loved.

Some of the apps can take a long time to download, and the progress bar isn’t super-obvious, so you might get your little darlings complaining about things taking too long. Books are much quicker, though, and videos stream almost instantly – but you do need constant Wi-Fi for the latter, so no videos for those long journeys in the car.

Handily, you can also download outside apps – such as CBeebies Playtime Island – through your adult account and simply add them to your child’s approved apps list. This is really useful for older children, in particular, as much of the Fire for Kids content is still targeted at younger kids.

One thing Amazon has added is a special web browser, which can be set to show a curated set of Amazon-approved bookmarks. Any other websites have to be manually put on the approved list – although in the case of YouTube, you can only approve specific videos rather than the whole site. 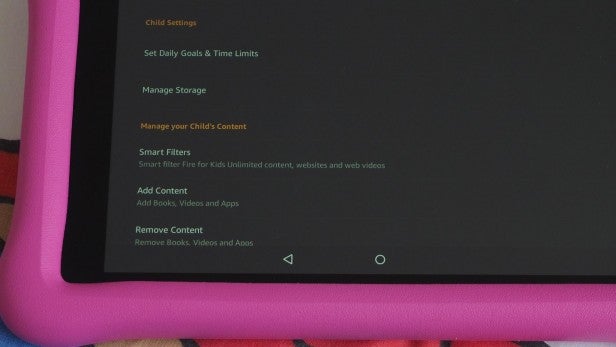 Within the Fire for Kids Settings page, there’s also the option to Set Daily Goals & Time Limits. You can specify what time of day your child’s profile can be accessed, for how long per day, and whether you want to set them a goal, such as a minimum of 30 minutes reading books.

Should I buy the Amazon Fire HD 8 Kids Edition?

The HD 8 Kids Edition is a really great tablet for children, combining a decent screen size and drop-proof design with a slick UI and tons of truly excellent content.

The only downsides are a lack of offline video viewing and the fact that the large price premium over the standard HD 8 only gets you a one-year subscription to the Fire for Kids service.

The best kids’ tablet so far – although it isn’t without its faults.