The Amazon Fire HD 8 is one of the best budget tablets you can buy from a recognisable brand. It costs £89.99 and features all the basic features you would expect.

The Fire HD 8 is perfect for those who want a cheap, basic tablet primarily for media consumption and reading. It offers more features than the Kindle Paperwhite or Kindle Oasis e-readers and it’s a lot more compact than the very large Fire HD 10.

It’s a great way to binge Prime content, use Alexa and just have a cheap tablet for day-to-day use. The only minor niggle is that for £20/$20 more you can get the Fire HD 8 Plus, which has a little more RAM and comes with wireless charging.

One of the best things about the Amazon Fire HD 8 is that while it is a cheap tablet, it doesn’t appear instantly dated like many others in this price bracket. It isn’t thick or heavy, and it’s very durable. This is a tablet I wouldn’t mind chucking in a bag without a case or giving to clumsy kids (or clumsy adults).

I’m looking at the white version of the Amazon Fire HD 8. It’s a pleasant look and has a textured finish that both looks and feels better than glossy plastic. The tablet is also available in a wide array of hues.

The Fire HD 8 succeeds in a manner that sounds like an insult: it isn’t rubbish. However, I’ve used many sub-£100 tablets over the years that are, frankly, rubbish – and a constant reminder that you opted to cheap out.

Amazon has tried to make a tablet that isn’t going to disappoint buyers quickly. I don’t think many of you will feel let down by its build, or become irritated by the amount of storage space you have to play with. 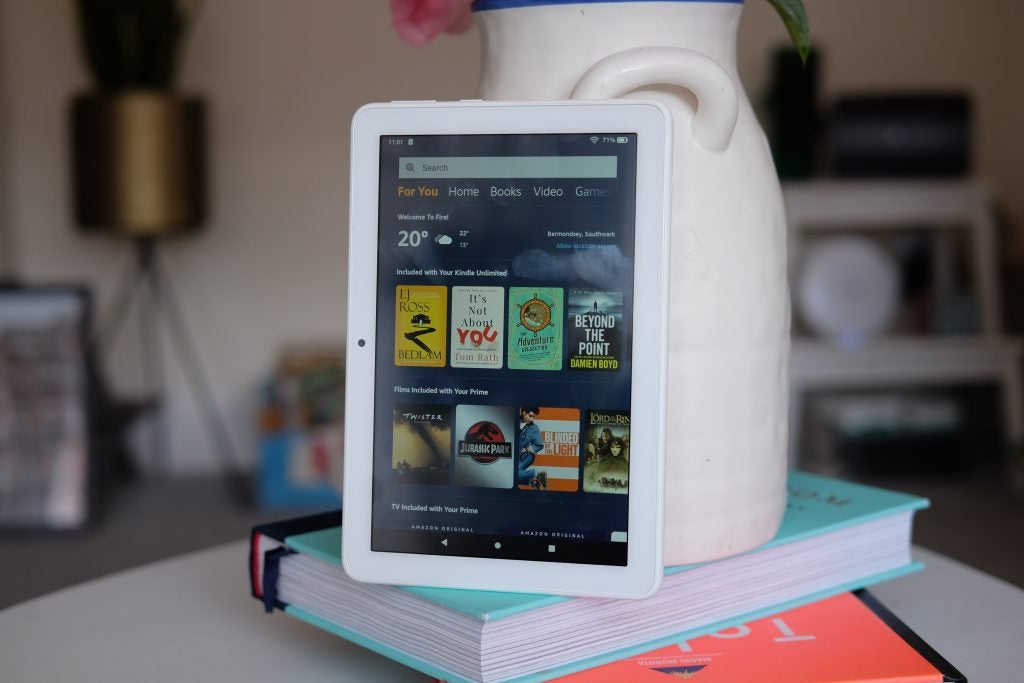 The screen is one of the weaker parts of the HD 8 and it hasn’t seen any major updates. The specs are basic, as is the case with all the lower-cost Fire tablets. What is most evident is that for a tablet primarily aimed at media use it’s not a fantastic device to watch Prime content on.

The screen is very reflective, making blacks appear quite grey and the fairly low resolution (1280 x 800) doesn’t look super-sharp even when spread out over the small 8-inch canvas.

How good colours appear will depend on how liberal you are with the brightness slider. The contrast-sapping screen style makes colours appear quite low-energy until you jack up the backlight.

The Amazon Fire HD 8 display can also struggle in bright environments, as the actual brightness levels aren’t quite strong enough to combat particularly strong rays. This should only really be a problem if you’re planning on using the tablet to read outside – if this is your primary use then I would suggest plumping for a Kindle Paperwhite instead.

But, overall the screen is fine, and for the price you can’t really expect more. 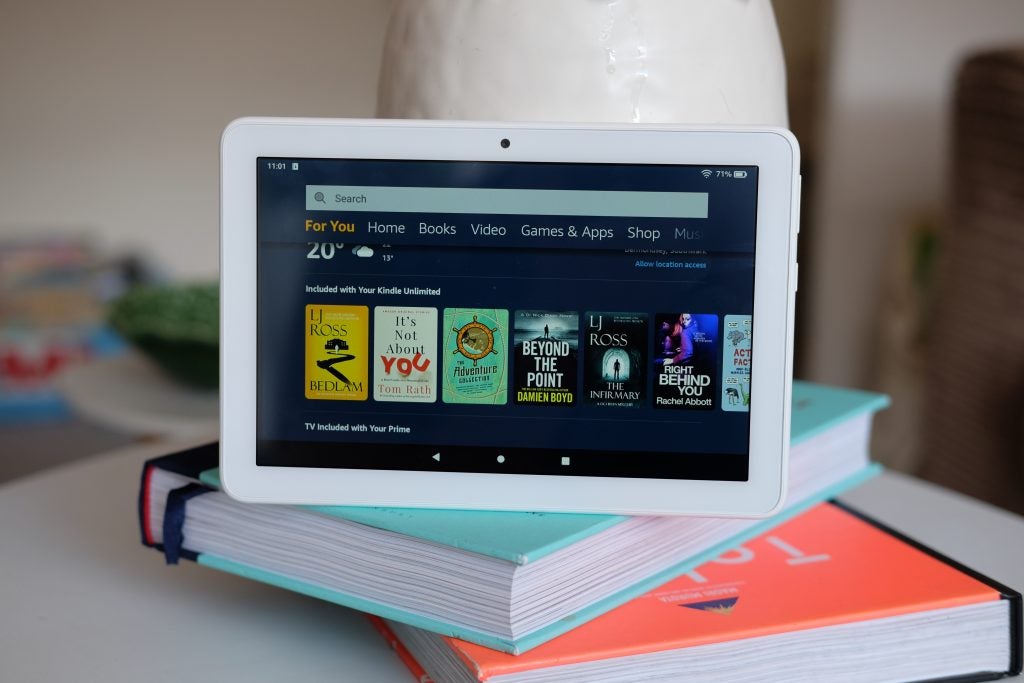 The Amazon Fire HD 8 runs Fire OS, which is based on the same software as the other slates in our best Android tablets list but looks and feels completely different. If you’ve used an Amazon tablet before, then nothing significant has changed. But it’s worth a quick primer if you’re new to the Fire range as it can put people used to regular Android off completely.

Fire OS is very service-driven. It’s made up of a bunch of homescreens, most of which push other Amazon-owned platforms. There’s Instant Video, the Kindle Store, Amazon.co.uk, Audible, and more.

It’s the equivalent of Google getting rid of the homescreens and instead just giving you pages featuring different parts of the Google Play Store. The reason the Amazon Fire HD 8 is so affordable suddenly becomes clear: Amazon makes most of its money elsewhere, badgering you into spending money with these services.

Some might find this approach annoying and I will admit that if you don’t use any of Amazon’s many services then it won’t be pleasant. However, if you do then I really appreciate the design. Your content is always front and center and easily accessible. All your books, video from Prime or audiobooks are laid out with big artwork and without having to dive into separate apps. It really helps the Fire HD 8 feel like a media tablet, rather than one for productivity.

The larger issue is the app store. Instead of Google Play, the Fire HD 8 has Amazon’s App Store. The selection here is decent and very focussed towards media apps, but it lacks any of Google’s services. If you want a tablet that’ll play nice for Docs, Maps, Drive and more than look elsewhere.

Alexa is also here – the excellent personal assistant that lives inside the Echo and Fire TV. It has all the skills you would expect – setting timers, playing songs, controlling your smart home – hands-free Alexa is supported too.

The Amazon Fire HD 8 isn’t very quick. Scrolling is rarely smooth and there’s noticeable lag all over the place. I did eventually get used to it but it is very much there.

The Amazon Fire HD 8 has a MediaTek processor at its heart, which is somewhat comparable to the low-end CPUs from Snapdragon. It has 2GB RAM, which is as little as an Android-based tablet can have without tending to feel annoyingly slow. For an extra £20 you can bump it up to 3GB with the Plus model which I probably would suggest. 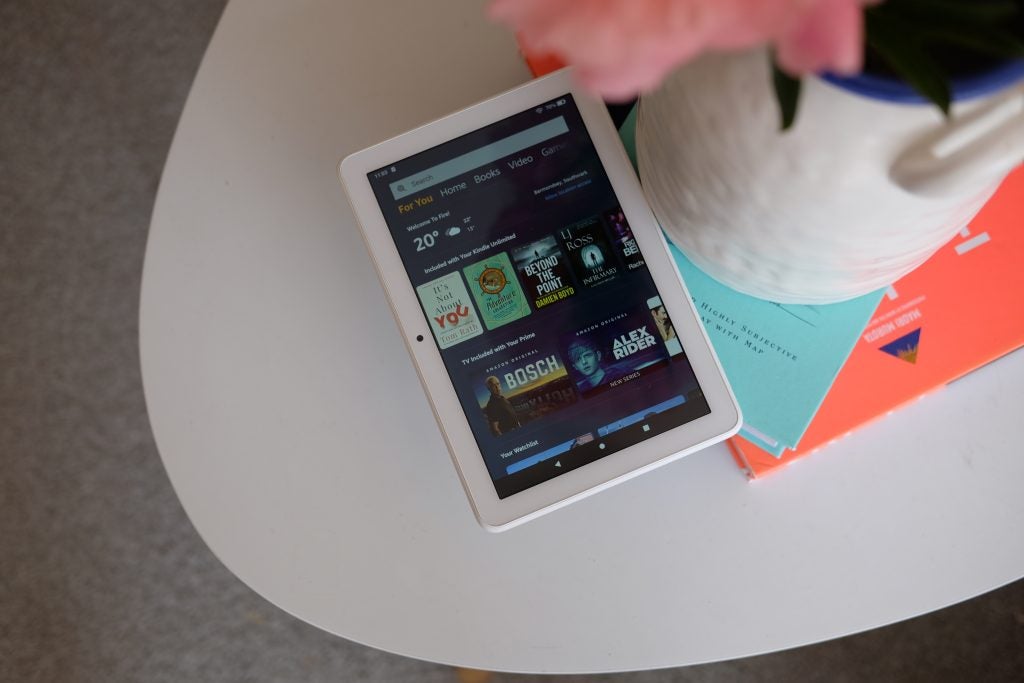 The 16GB model is no longer available this year and the base unit now has 32GB storage. There is a 64GB variant available too (£119/$119) and MicroSD card support remains if you would rather bump storage that way.

For a small and cheap tablet, the Amazon Fire HD 8 sounds pretty decent. Audio is loud, clear and there’s a headphone jack for private listening.

There’s a 2-megapixel unit on the rear of the device and a 2-megapixel camera on the front, and these are as basic as mobile device cameras can get. The resulting images barely hold up to viewing on the Amazon Fire HD 8’s screen, let alone any zooming in or having a closer look on your laptop.

Amazon says this year’s Fire HD 8 lasts for up to 12 hours of ‘reading, browsing the web and watching video’, which is a nice improvement over the 10 hours of the previous model.

This largely holds up. At 50% display brightness, an hour of Netflix consumes 7% of the battery, which is a great result. Crank the battery up further though and this will double. Due to the fairly dull screen, I tended to have the screen set to max brightness when I was doing anything in a well-lit room.

A very welcome change is the switch to USB-C, replacing the tired microUSB port. This means you can now use any USB-C cable to charge the tablet.

Why buy the Amazon Fire HD 8?

While it isn’t the best tablet around, the Amazon Fire HD 8 is a fine device, and for £89.99 it’s something of an impulse buy. If you’re after a cheap tablet, maybe for the kids, or something solely for watching media on your commute this is a good pick.

Its screen is fair, the build quality is fine and there’s plenty of storage. While it doesn’t feel incredibly fast, it has enough power to run Amazon’s UI and play most available games. Plus having Alexa on a tablet is a nice touch.

Can you watch Netflix on Amazon Fire HD 8?

There is a Netflix app for the Fire HD 8

Is the Kindle Fire HD 8 waterproof?

The Fire HD 8 is not waterproof

Can you Skype on Amazon Fire HD 8?

There is a Skype app for the Fire HD 8