Like all Fire-series tablets, the Fire HD 6 runs Fire OS. This is an Amazon-made interface based on Android, but the changes it makes are far more invasive than just about any other custom Android UI.

It does’t look like Android, and all the cornerstones of the Android experience have been replaced. There’s no Google Play app store, no Google Maps, and the layout of the system is rather unusual.

When you boot up the Fire HD 6, you’ll see a carousel of the apps you’ve used recently. There’s no conventional home screen in Fire OS: no widgets and very little customisation. You can’t even change the background of the system.

Fire OS really is not a place to hang out, it’s a delivery method for content. 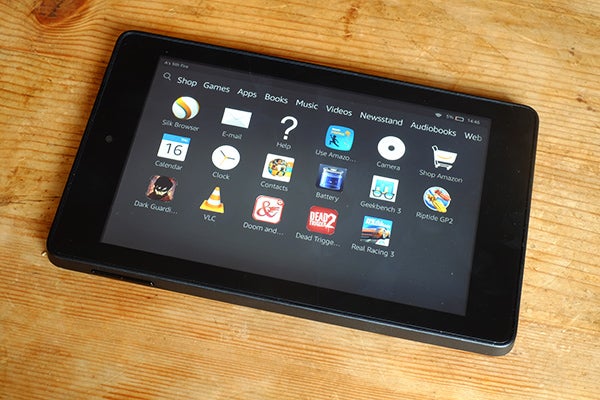 There’s a vast wealth of content offered by Amazon these days, too. While the Fire HD 6 runs normal Android apps, the interface gives top billing to Amazon’s digital services. Here’s the list:

Amazon Appstore: The Google Play alternative
Audible: Amazon bought this audiobook giant in 2008
Kindle store: A massive, rather excellent, ebook store
Newstand: This digital magazine stand is given its own spot on the Fire HD 6
Amazon MP3: This iTunes alternative launched in 2008
Amazon Instant Video: Formerly LoveFilm, this offers streaming and video on demand
amazon.co.uk: Even the web store gets a spotlight

The more you embrace these services, the more you’re likely to get on with Fire OS. And if you have no interest in any, you’ll effectively be ignoring/avoiding large parts of the interface on a daily basis.

Some of you won’t like the feeling of being strongly nudged towards Amazon’s services in the Fire HD 6 – consider an alternative if that sounds like you. But several are worth experiencing.

While Amazon Prime Instant Video is perhaps not quite as hot as Netflix, it’s still a good service, and one that’s even better on a Fire tablet. You can download as well as stream films/TV, where you can only stream them with other devices. In a tablet, this is a huge benefit, letting you cache movies and TV episodes for watching on – for example – train journeys. 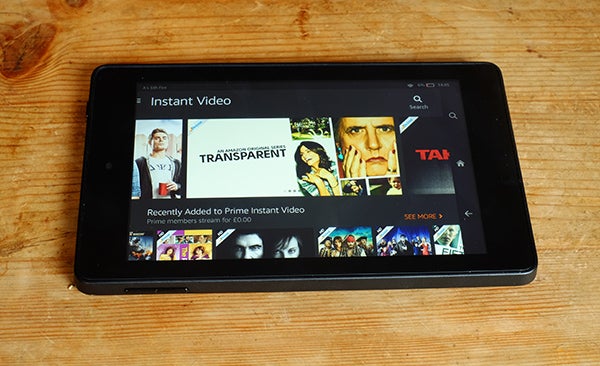 We’re also gaining an appreciation for the Amazon Appstore. It’s not as well-stocked as Google Play, but Amazon clearly knows it’s playing catch-up, and is trying pretty hard to please. There’s good curation on the store, and frequent sales.

It also offers a coin-based rewards scheme. Buying some games or apps earns you coins, which can then be used to buy other games/apps.

Yes, there are compromises, and when you know the Fire HD 6 is based on Android, you miss some of those core Android services. But look at the tablet in a more abstracted sense and it’s a good deal for £79.

Fire OS is also fairly easy to use in the Fire HD 6. Unlike the Fire Phone, it uses a persistent set of soft nav keys rather than a confusing gesture system, making using apps a good deal easier to use. 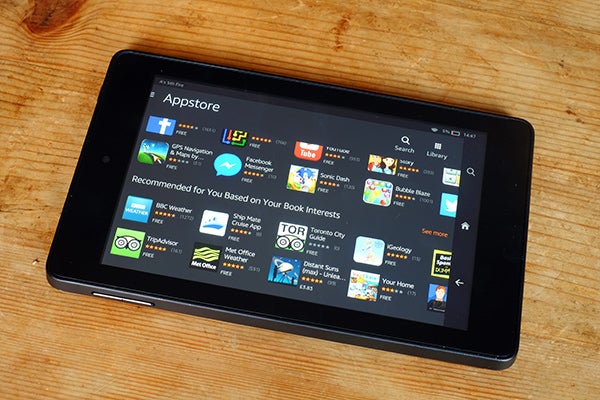 One of the most pleasant surprises, though, is that the Fire HD 6 performs quite well too. Early Fire tablets were laggy and frustrating, but it’s finally mostly up to speed.

You do need to bear in mind how Fire OS works, though. Because of its content-driven approach, a lot of the interface needs to be downloaded on the fly – so when you tap on the ‘Audiobooks’, there is a loading delay. It is far less instant than standard Android, but short of the Fire tablets caching a bunch of data that may or may not be used, it’s something that’s not going to change. 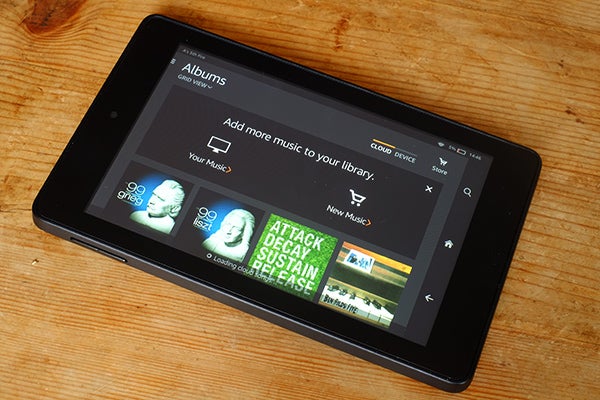 The Fire HD 6 doesn’t need a super-powered processor to provide its largely sound performance. It uses the MediaTek MT8135, a quad-core 1.2GHz processor, with 1GB of RAM.

While MediaTek chipsets are generally seen as budget options, this chipset in particular is rather interesting, and clearly capable. It uses two high-power Cortex-A15 cores and two low-consumption Cortex-A7 cores. This is the first time we’ve seen a device this cheap use Cortex-A15 cores.

In Geekbench 3, the Fire HD 6 scores 1427 points, outperforming the very popular Snapdragon 400 in the (many) devices we’ve tested. Of course, it’s miles off the performance of a true high-end device, and a way off what you get in the Intel Atom-powered Asus MeMO Pad 7. 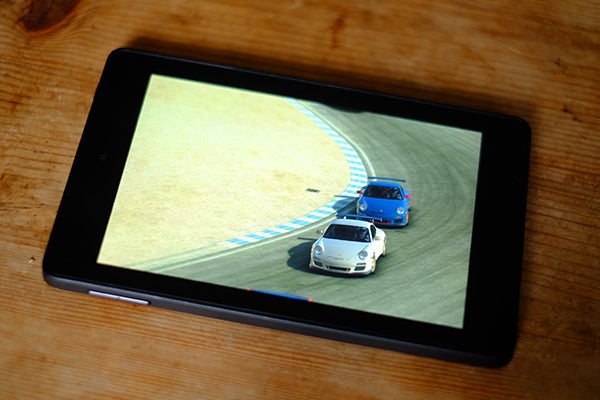 But getting this performance in a £79 tablet is seriously impressive, especially when it is matched with – at least – decent performance optimisation in Fire OS.

The Amazon Appstore also offers the games we usually test Android tablets with. Performance in Riptide GP2 is excellent, and Real Racing 3 runs very well. We did experience some quite severe issues with Dead Trigger 2, though. It refused to let us change the graphics settings from anything but ‘low’, crashing out of the game.

It’s a real shame, as we believe the Fire HD 6 may be able to cope with the extra demand of Dead Trigger 2’s most advanced reflection and lighting effects. Its GPU is a PowerVR G6200, the same generation as the iPhone 5S GPU, just a lower-end model. When playing more demanding games. the left (/top) part of the tablet gets a bit warm, but nothing worrying.

Good gaming skills make this a pretty sound alternative for a Sony PS Vita or Nintendo 3DS, and not just for the kids.