The Amazon Fire HD 10 is Amazon’s best specced and largest tablet and an excellent method for accessing the vast array of Prime content.

Improvements include a new MediaTek processor and USB-C charging. Neither are dramatic updates, but they do help circumvent the obvious signs of ageing.

If you want to stream video, read comics and waste time in the usual tablet ways then you’ll be able to do so with the Amazon Fire HD 10. However, mobile gaming fans and those looking to get creative with more dynamic apps should think twice. Many of Google Play’s best bits aren’t readily available for the Amazon Fire HD 10, and nor can you simply side-load most of them either.

Amazon tablets are like the “essentials” lines of supermarket food. They don’t try to wow you with flashy design, but are often capable of doing the job just as well as more expensive brands.

The Amazon Fire HD 10 has a textured plastic back, just like the tablet it replaces. It’s available in four colours – white, black, blue and the more unusual plum – but you won’t find any glass or metal often see on the rears of more expensive tablets.

At £150, I don’t have an issue with this cut-price style at all. The plastic feels perfectly good in the hand, and there’s no excessive flex to the Amazon Fire HD 10 casing. Amazon has produced a tablet that’s sufficiently sturdy to avoid customer returns. 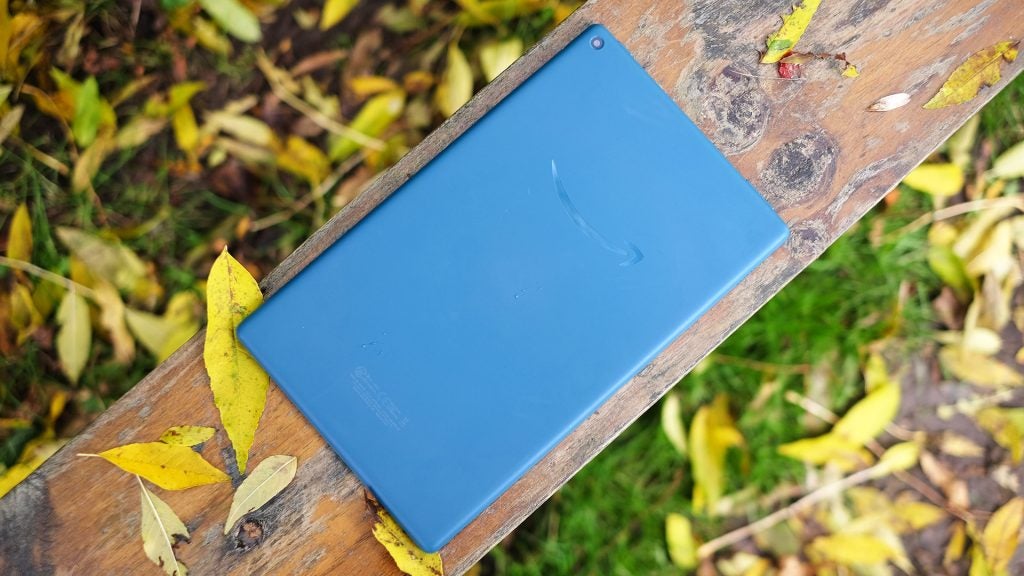 This tablet is cheap, but doesn’t appear poorly made. Similar to previous 10in Amazon tabs, the front of the device is covered by a big sheet of glass. Firm fingerprint pressure will distort the screen image a little, suggesting the tempered glass isn’t the best around.

Then again, in my opinion the toughest glass is more important for phones. If you manage to seriously scratch your tablet, then you’d have to question how you’re handling it.

The Amazon Fire HD 10 has a USB-C charge socket rather than the micro-USB seen in the 2017 version. This lets owners of more recent phone use the same cable to also charge their tablet. It doesn’t improved charge speeds much, however. The Fire takes four hours to recharge from flat. 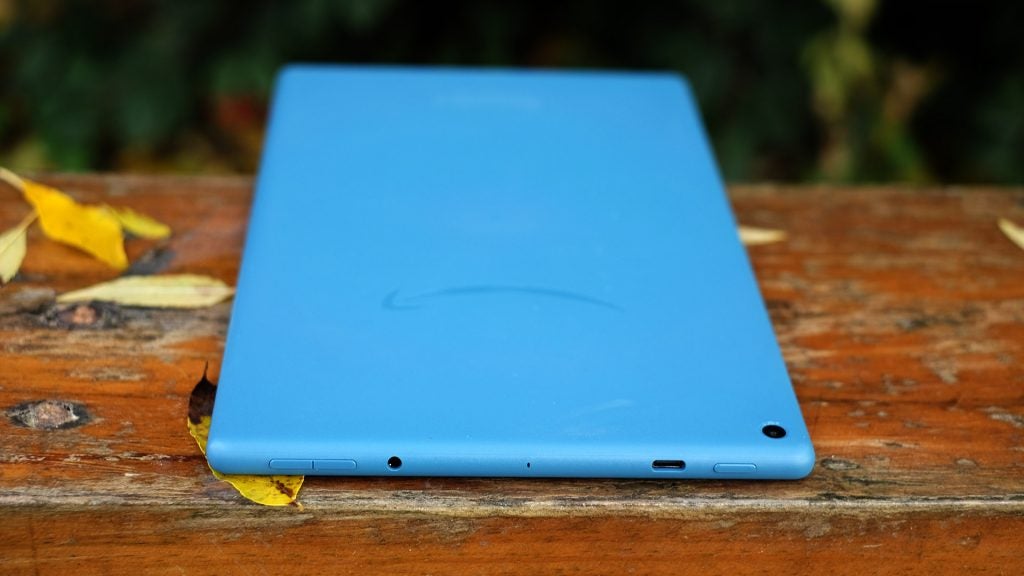 There’s no water-resistance here – although you can probably still get away with using it to watch Netflix in the bath if you’re careful.

The Amazon Fire HD 10’s screen is one you simply won’t better at the price. It’s a 10in 1920 x 1200 pixel LCD that offers up solid colour and decent clarity.

Netflix also plays at full 1080p resolution, which isn’t available on many high-end phones, let alone the kind of no-name tablet you might be tempted to buy instead of an Amazon Fire HD 10. 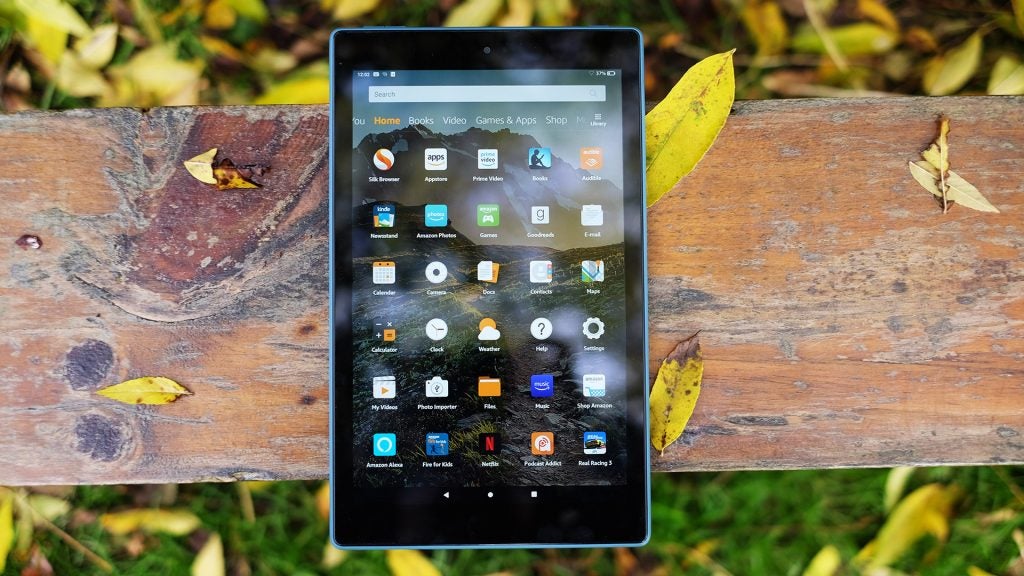 Amazon would prefer you sign up to Prime and use its video service instead, but there’s nothing to stop you using Netflix. YouTube app support is limited to third-party solutions, though. Or you can use the web browser.

Why? The Android YouTube app is part of the suite you get with a fully certified Android phone or tablet, and this isn’t such a device.

The Amazon Fire HD 10 has the most heavy-handed Android software you’ll find on any phone or tablet. Amazon has used Android only because it’s a convenient base of operations for its aim: to get you to engage with Amazon services.

For many of us, the Amazon approach is a good deal. You get great hardware for the cash, and if you’re a Prime or Kindle user then the software will seem like it’s designed for you.

But this isn’t normal Android. There’s one homescreen filled with the apps you’ve installed; the rest of the pages are dedicated to Amazon services.

If you’ve experienced an Amazon tablet before then you’ll know this already; nothing changes here. However, it’s a big shift it you want a tablet to complement an Android phone, or will be upgrading from a non-Amazon tablet.

Amazon Fire HD 10 games and performance – Power isn’t a problem, nor is the variety of entertainment on offer

The Amazon Fire HD 10 doesn’t offer access to Google Play – the app store used in almost every other Android device. You get the Amazon Appstore instead.

There’s plenty here, but many of the top apps and games are missing. The majority of the games I use to test Android phones and tablets aren’t available, such as PUBG and ARK: Survival Evolved. I tried to side-load PUBG – where you download the APK app file and install it manually – but couldn’t get past the title screen. 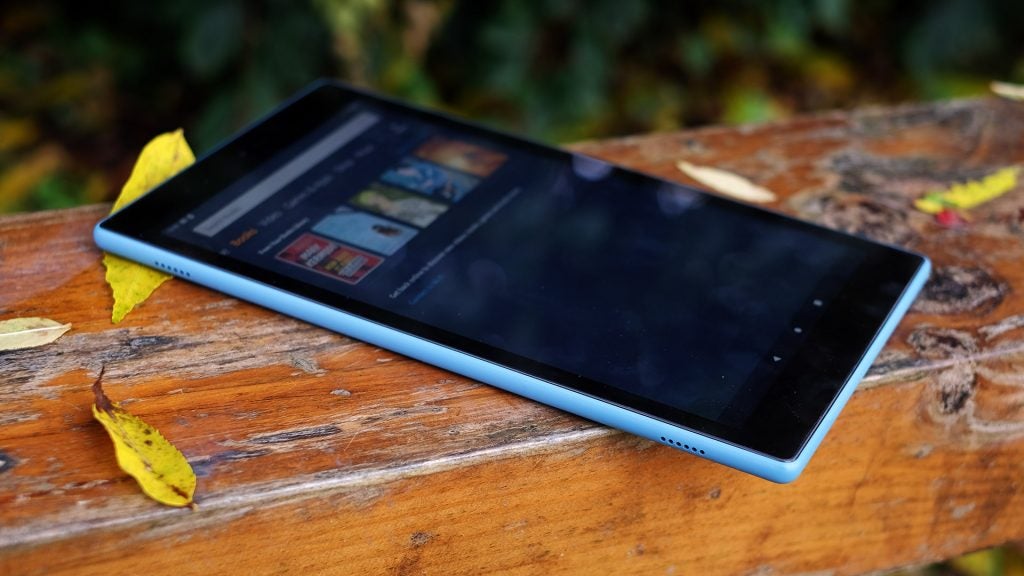 This manual install method also lacks the security of Google Play. Sites such as APK Mirror claim to enforce their own security measures, but they simply won’t have the rigour of Google’s own. And, in most (If not all) cases, the developer/publisher won’t have agreed to the distribution of their apps over these platforms.

Many of the more ambitious Android games – those ported from PC or console – aren’t available in the Amazon Appstore either. And while I may tend to end up playing addictive-by-design casual games on my tablet, the games I keep intending to play are more substantive titles such as The Walking Dead, which aren’t available.

Fortnite doesn’t work when you side-load it either, which may be a concern for some. Mobile gaming enthusiasts would do well to steer clear of the Amazon Fire HD 10.

Is there enough to keep you entertained in general? Absolutely. The Amazon Appstore still includes a bucket-load of games, including popular or expansive titles such as Minecraft, Hearthstone, Clash of Clans and Candy Crush.

It’s a similar setting when it comes to apps, too. You’ll find numerous drawing apps available for the Amazon Fire HD 10, but not Adobe Sketchbook Pro and Photoshop Express.

None of this is down to a lack of power. The Amazon Fire HD 10 has an octa-core MediaTek MT8183, which was apparently originally intended for Chromebooks rather than Android tablets.

It scores 5123 points in Geekbench 4, which is a very healthy score for a £150 Android. The Fire HD 10 also features a Mali G72 MP3 GPU – handsets with the same GPU include the Moto G8 Play, Samsung Galaxy A50. These are entry-level phones, but not so low-end they aren’t really designed for games. 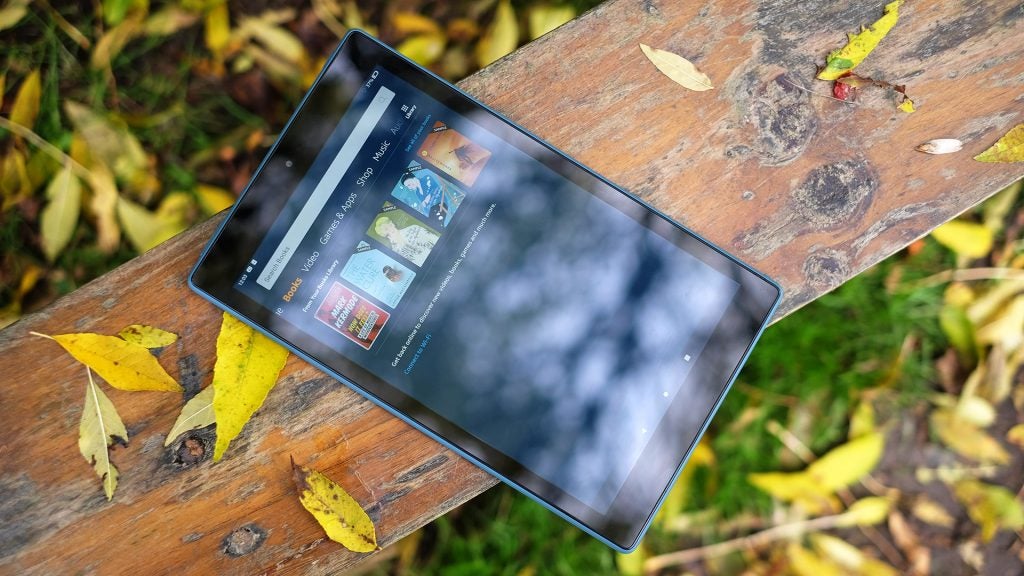 Asphalt 8 was perhaps the most demanding game I played on the Amazon Fire HD 10. It can handle the game well at “high” graphics (the top setting); it looks fab. There’s the occasional slight frame rate dip on some tracks, but nothing that’s ruinous to the game. That Asphalt 8 is now ancient helps – it was released in 2013, and the follow-up, Asphalt 9, isn’t available on the Amazon Appstore (yet).

Note that Game of Sultans is currently featured in the Appstore’s “new and upcoming” section, but it came to Google Play in July 2018. By now the message must be through: if you want the latest, greatest app and games then an Amazon Fire HD 10 isn’t the way to go.

The tablet’s inclusion of just 2GB of RAM is also paltry. Although I haven’t experienced any major performance issues. The Amazon UI isn’t the quickest around, but the keyboard pops up when it’s meant to, and there are no irritating pauses during screen transitions.

The Amazon Fire HD 10 features an extremely basic camera hardware: 2-megapixel units on both the front and back. Neither has a flash or autofocus.

While the selfie camera is an upgrade over the VGA sensor of the 2017 version of the Amazon Fire HD 10, these cameras are both pretty poor. Detail is lacking in all conditions – although, admittedly, the front camera could be worse in muted lighting. You can still see your face clearly, even if there isn’t much detail rendered in it. The Amazon Fire HD 10 camera app is also oddly unintuitive. A camera this simple requires barely any controls, but you have to manually bring up a Settings display just to switch to the front camera. There’s plenty of space on offer here, Amazon. A little selfie cam button isn’t likely to ruin this camera, which is nothing to write home about anyway.

While the camera array is poor, it’s exactly the kind of array the Fire HD 10 should present. The hardware required for certain games and apps is present and correct, but virtually none of the budget has been allocated to features that people shouldn’t really use much.

Video capture for both cameras maxes out at 720p, which is no surprise given neither sensor actually has the resolution for Full HD capture (images are 1600 x 1200 pixels).

Cameras don’t matter too much, but battery life does – and, thankfully, Amazon has nailed this part. It hasn’t published the capacity stats of the cell, but does state that it’s designed to last for up to 12 hours of mixed use. That’s music, browsing and video playback – because most games will naturally sap the battery far more quickly.

Streaming YouTube with the Amazon Fire HD 10 for a couple of hours suggested you’ll get a little over 11 hours of use between charges.

Nothing has really changed here since the 2017 version of the Amazon Fire HD tab. Nevertheless, such battery life figures remain satisfying. Note that power levels don’t appear to drop too much if you leave the tablet sitting on your living room coffee table for a couple of days, either.

Charging remains a very slow process indeed; a full recharge takes around four hours. You may get a USB-C charge port, but this doesn’t actually affect charging speed; voltage and current do. 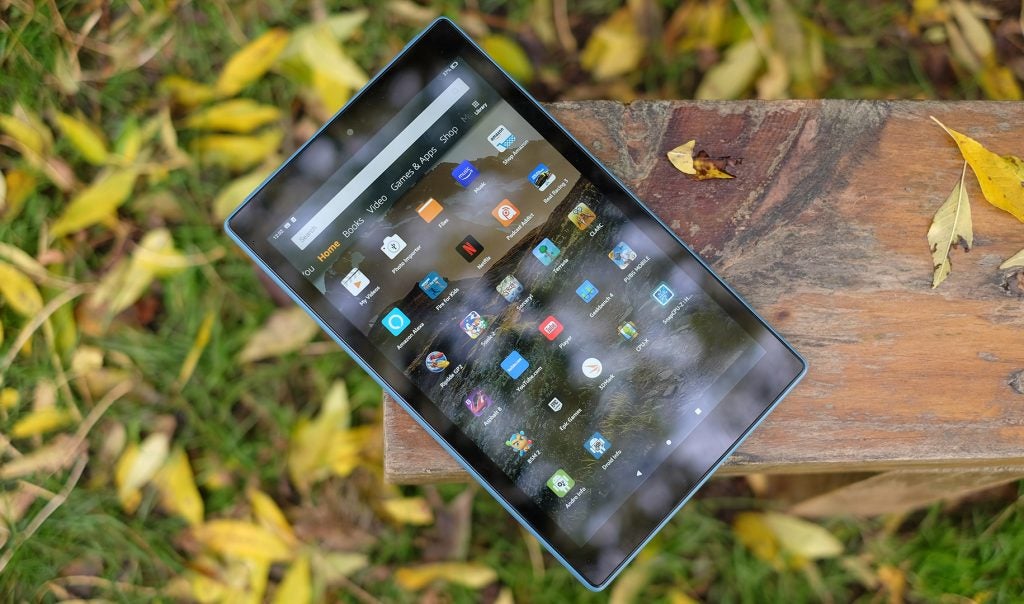 Should I buy the Amazon Fire HD 10?

The Amazon Fire HD 10 is one of two things: it’s either the only tablet you should consider, or one almost guaranteed to disappoint.

Its screen and build quality are both excellent for the price, so if 90% of your tablet use will be Amazon and Netflix streaming, then the Amazon Fire HD 10 is perfect.

However, the Amazon Appstore games and apps library is unlikely to impress those who already know their way around Google Play. Most of the games you might wait to play on the big screen aren’t available from the Amazon Fire HD 10’s app store. If Google Play gets an A, Amazon Appstore is C-grade material at best.

But you can’t complain about the hardware you get for the cash. Samsung’s Galaxy Tab A is perhaps the most obvious recent alternative. It comes with Google Play and also has a 1200p screen. However, it costs £50 more and has a significantly weaker processor.