Amazon’s latest cheap-as-chips Fire 7 tablet is, once again, a slate designed almost solely for the consumption of Amazon content. Books, TV shows or audiobooks – the Fire 7 gives you a direct line to all that Prime has to offer.

If you want a tablet for the basics and aren’t willing to spend a penny more then the Fire 7 should get the job done.

It might not have the specs to match some of the best tablets (or even the best budget tablets) around – but it offers a tempting prospect nevertheless.

Design – The Amazon Fire 7 is a rugged, plastic tablet that can take a beating

The Amazon Fire 7 is about as far away from the iPad Pro and Samsung Galaxy Tab S4 as it’s possible to get. Considering this tablet costs a penny under £50 (and one cent under $50 in the States), this should hardly come as a surprise, but you might be shocked at just how budget this slate feels the first time you pick it up.

It’s built completely out of plastic, with buttons that feel a bit mushy and a rear casing that seems like it should pop off completely. It’s basic, but that’s not necessarily a bad thing. You won’t worry about this tablet getting scratched in your bag, or about giving to your kids. 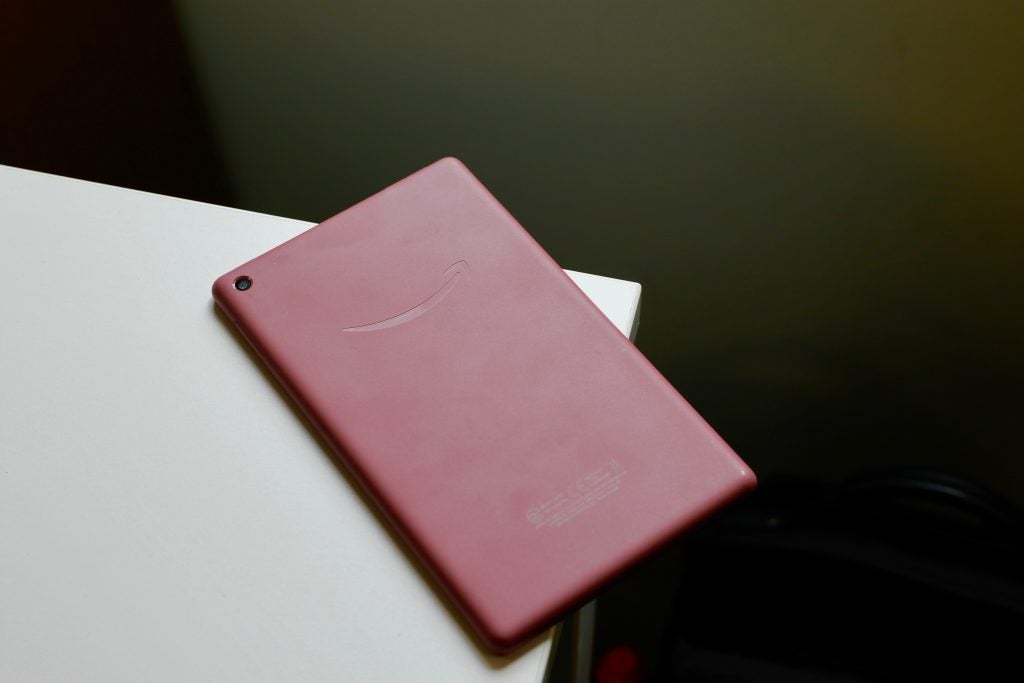 The Fire 7 comes in Plum (pictured), Black, Sage and Blue

Because of its plastic construction, it’s also very light and can be comfortably held in one hand for reading.

As the name suggests, the Amazon Fire 7 has a 7-inch display. This makes it Amazon’s smallest tablet and among the dinkiest we’ve reviewed. With its slim 16:9 display, it’s a lot narrower than the 7.9-inch iPad Mini and it was small enough to slip into the pocket of one of my larger coats.

All the ports and physical controls are on the top – which is a bit odd until you get used to it – and comprise a 3.5mm headphone jack, micro USB port for charging, volume rocker and lock switch. As USB-C is so common now, it irks me that Amazon is sticking with the tired older style. However, if you’re someone with a bunch of micro USB cables lying around, you probably won’t find it so much of a nuisance.

Sacrifices are always going to be made to sell a tablet at £50/$50, and it’s obvious where corners have been cut here: the display. The 7-inch IPS (In Plane Switching) panel is colourful and bright, but the low 1024 x 600 resolution is very obvious and it makes everything from watching films to browsing the web a bit of a chore. Pixels are always noticeable and text is very jagged – not ideal for a device that’s marketed as an e-reader. 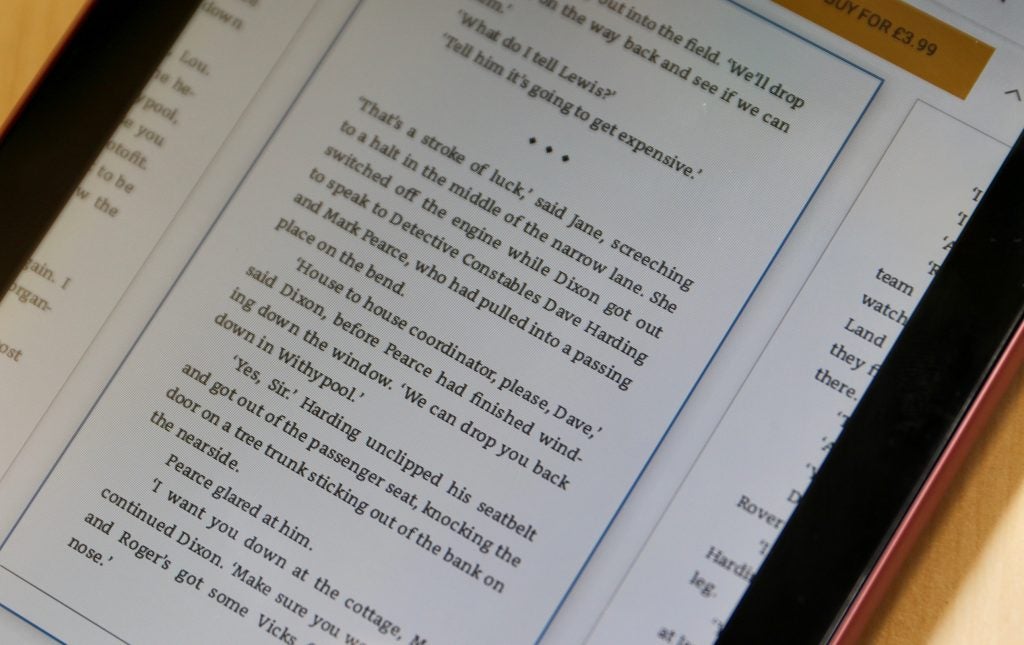 Text is far from crisp

How much this bothers you will depend on how much you value a clean, crisp image. If, like me, you prefer pixels to blend into each other, I would suggest spending a bit more and going for one of the Fire HD tablets instead.

Software and Alexa – If you’re big into Amazon Prime, the Fire 7 will bring all your media and books together

The software that runs on Amazon’s Fire line is the definition of love it or hate it. Every aspect is designed to funnel you towards some sort of content supplied by Amazon, whether it’s a Prime video or a piece of clothing you looked at two weeks ago.

If you’re not a Prime member then I don’t think this is the tablet for you – even at such a low price. Other apps, like Netflix, are available, but the home screens are designed to push Amazon’s own stuff right to the front. At times, it can feel like you’re in a constant advert.

There are also adverts (or Special Offers, as Amazon likes to call them) on the lock screen. These mainly comprise book suggestions, which are fine and can be disabled by paying an extra £10/$15.

If you are deeply entrenched in the Amazon ecosystem then the overall software UI is great at quickly delivering content. Prime Video, Kindle books, Audible audiobooks and apps from Amazon’s well-stocked Appstore are all easily available, alongside other handy features, like X-Ray in video playback and the ability to flip between a Kindle book and an audiobook.

I’m a fan of the For You home screen panel in particular. This is an area where you’ll get quick access to your recently read books and watched films, all combined into a handy, scrollable list. 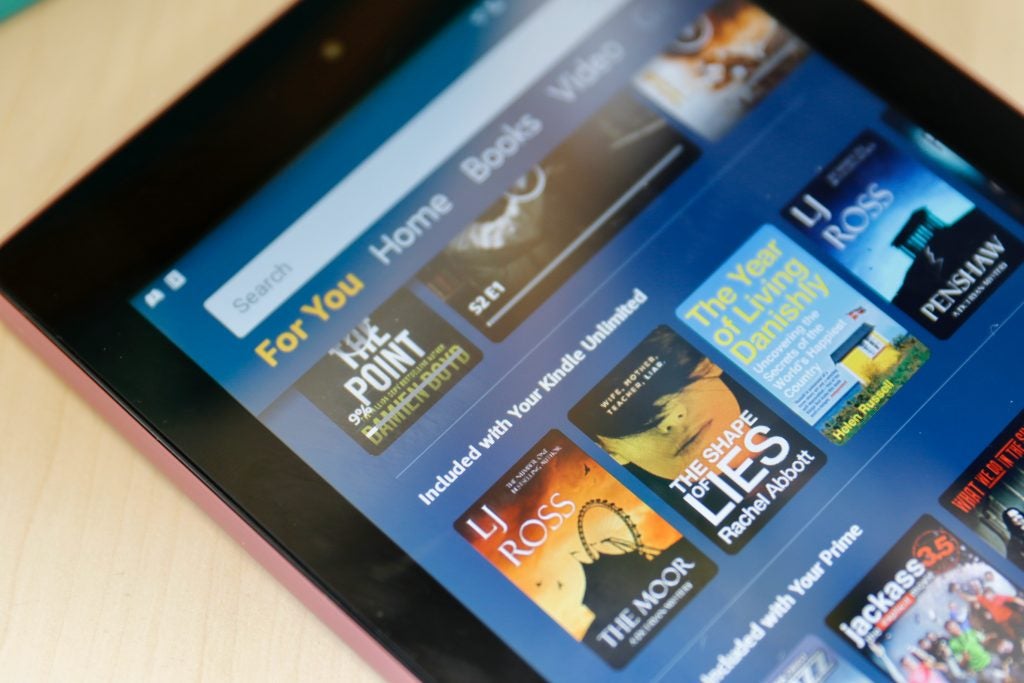 As with previous Amazon tablets, the Fire 7 runs a forked version of Google’s Android. Android remains the basis of the OS, but there’s no visible mention of this and there’s no support for popular services like YouTube, Gmail or the Google Play Store. Instead, Amazon has its own app store and native apps for email and web browsing, which are far from Google’s level – if you’re a big user of the search engine giant’s services, you’d be better off with a tablet that runs a proper version of Android.

One feature the Fire 7 has over other Android tablets is deep integration of Amazon’s Alexa voice assistant. While previous versions of the Fire 7 had Alexa, this is the first to go hands-free, meaning you don’t need to press a button to bring Alexa to life. Instead, just say “Alexa” in the same way you would with an Echo or Echo Dot.

You can use Alexa to control your smart home (“Alexa, turn off the bedroom lights”), play music and just about everything else you can do on the Echo Show.

Performance – The Fire 7’s performance is acceptable, even if the cameras are forgettable

The Amazon Fire 7 isn’t the tablet for intense gaming sessions or picture editing, and nothing makes that clearer than the fairly low-end internals. There’s a mere 1GB RAM, paired with a 1.3Ghz processor. That amount of RAM stands out as being particularly low and you’ll notice it when jumping between apps.

There’s a lag and judder when opening apps that you don’t get with pricier tablets. However, and again I come back to the price, I can forgive that when it’s only £50.

You’ll notice lag when gaming, too, but basic things like browsing and email are a lot smoother.

There are two cameras on the Fire 7: one on the front, which caps out at 720p video, and another on the back, which is 2 megapixels. Neither are very good and, to be completely honest, I would be all for ditching the cameras completely (or at least the rear one) if it allowed Amazon to add a bit more RAM. The camera is slow to focus and shoot, it struggles when the light isn’t bright and generally will be beaten by any phone you’ve got in your pocket.

Amazon states that you should expect seven hours of reading, browsing and media watching. From my weeks using the device on a daily basis, I feel these claims are correct and I tended to charge the tablet every couple of days. If you only use it for, say, half an hour of reading every day, you’ll probably get a week between charges. 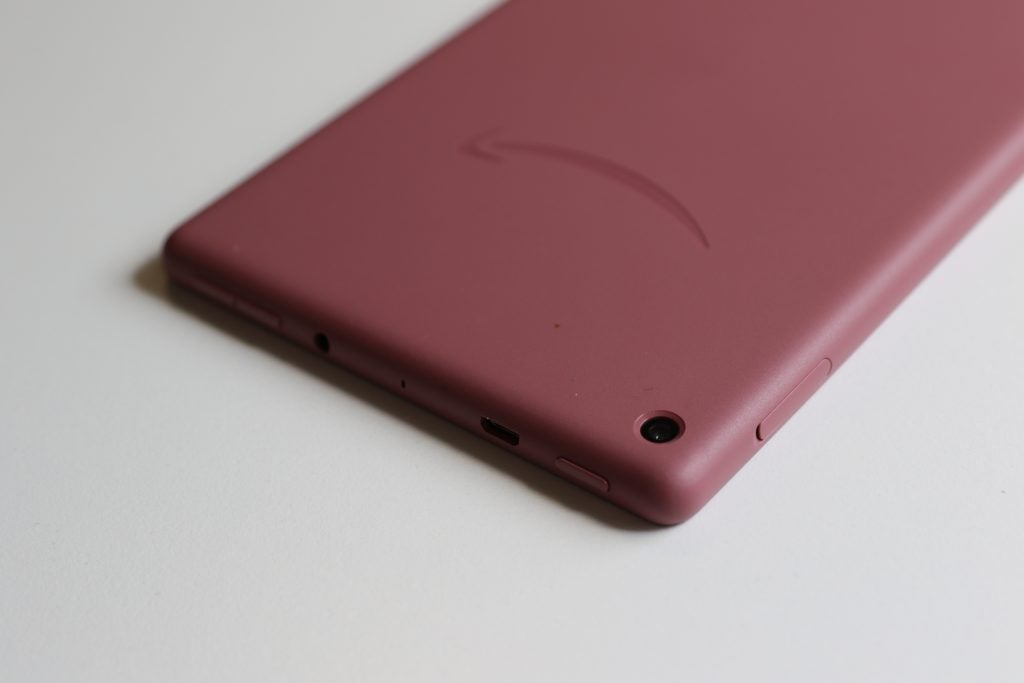 All the ports are along the top

Charging the tablet fully takes roughly two hours with the included power brick. However, it’ll take much longer if you plug it into a laptop to charge (this is something you might be familiar with doing if you’re a Kindle owner). Amazon has also stuck with the micro USB port, rather than switching to the newer USB-C alternative.

Should I buy the Amazon Fire 7?

The Fire 7 remains a budget tablet that, while far from perfect, is hard to really criticise for the £50/$50 price. If you want a cheap slate to watch movies on long flights or give to the kids without worrying about it getting damaged, this is a strong pick.

There are shortcoming and sacrifices, of course: the display is poor, cameras terrible and the meagre 1GB RAM makes itself known a little too often. But when you consider that the cheapest iPad costs over six times the price of the Fire 7, these negatives are a little easier to swallow.

Amazon’s tablets don’t have a YouTube app available through the app store. However you can watch through the browser.

Does Amazon Fire 7 have Bluetooth?

Yes, the Fire 7 has Bluetooth.

No, there is no cellular connectivity on the Fire 7 or any other Fire tablet. You’ll need Wi-Fi to access the internet.

There is a Roblox app available to download on the Fire TV through the Amazon App Store.