Don't worry about the lacklustre internals, buy this for the year of amazing kid-friendly content included in the price.

What is the Amazon Fire 7 Kids Edition?

The smaller of Amazon’s latest Kids Edition tablets, the Amazon Fire 7 Kids Edition, isn’t simply a standard Fire tablet with a case that resembles some sort of expanding foam accident. For your money, you also get access to a wealth of child-friendly content from Amazon’s rich repository; covering apps, games and videos. Not to mention it comes with a no-questions-asked two-year warranty too.

The foundation of this particular Kids Edition centres around the latest Amazon Fire 7 – your basic 7-inch tablet. It doesn’t appear to offer all that much of an upgrade over its predecessors, meaning it covers all the basics without issue but don’t expect standout performance in any one area.

The enhancements of the Kids Edition first become apparent when you squeeze the tablet into the ruggedised case – available in blue, yellow or pink. Sure, it adds significant bulk to the overall package but it also makes it markedly easier to grip (particularly for smaller hands).

Its robust design instils confidence in the sense that it looks as though it could take a licking and ensure the tablet at the centre keeps on ticking. It forms a snug fit around the Fire 7 and there are cut-outs for the 2-megapixel rear camera, the single, mono speaker on its bottom edge, the volume rocker and the 3.5mm headphone jack slot, along with the power button and (somewhat dated) microUSB charging port.

I was surprised to find that a screen protector wasn’t part of the equation here. Considering the extra scratch required over the standard Fire 7, you’ll also need to be willing to fork out a further £9.99 for some purpose-made display armour. Despite its absence, the case does a good job of keeping the screen out of harm’s way should the tablet land face down. Should anything go awry, the no-quibble two-year warranty is very much appreciated though.

The Fire 7 Kids Edition comes with only 16GB of storage, but a microSD slot means you can extend that to 256GB.

The final extra that you pay a premium for is the Fire For Kids app and a one-year free subscription to the service. This offers a child-friendly overlay with a load of useful parental controls and access to a ton of decent videos, games and ebooks. 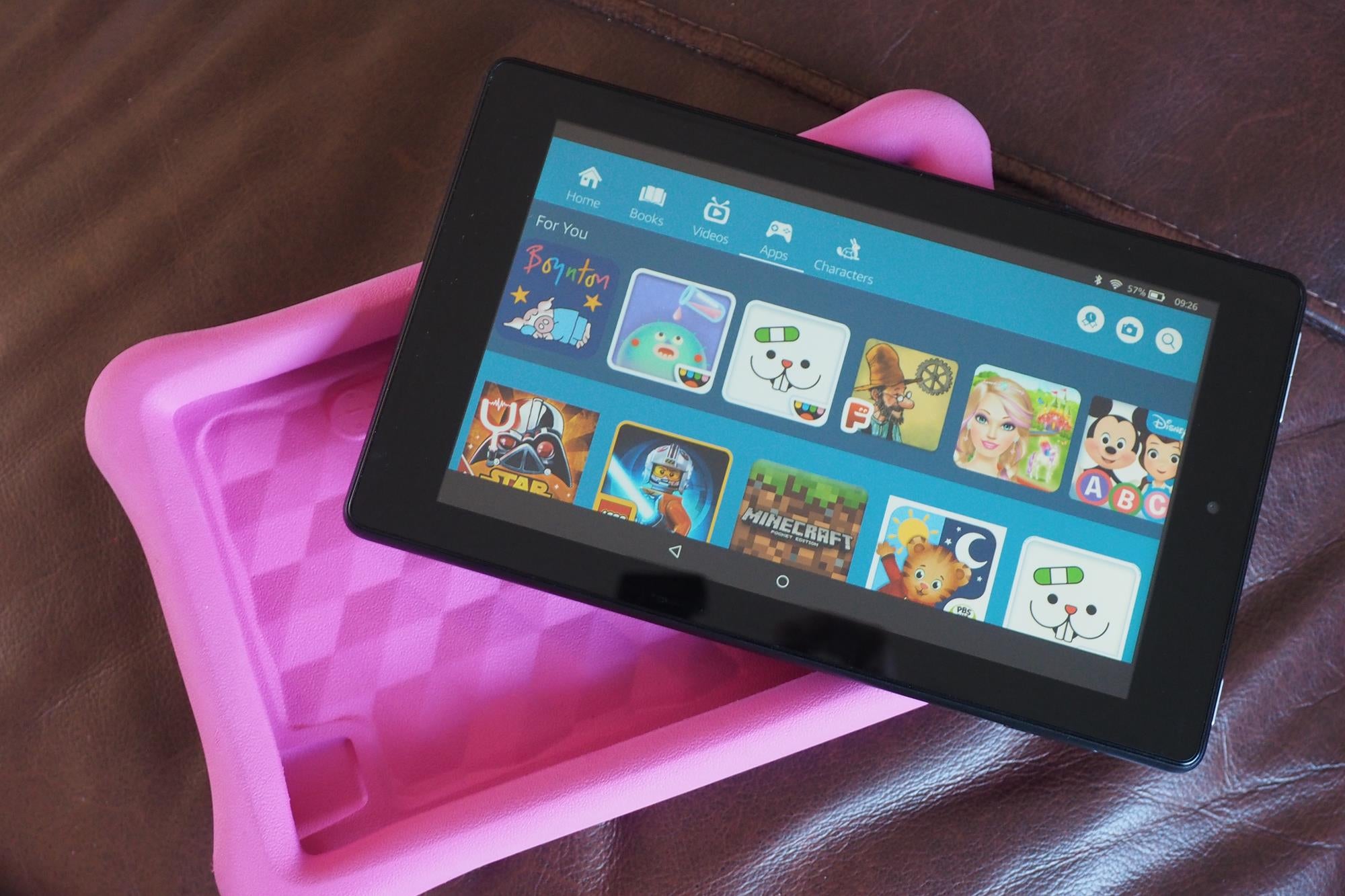 As we noted in our Amazon Fire 7 review, this is a tablet that feels like a throwback. You won’t notice much difference between this and the very first Fire model, aside from the addition of the Alexa digital assistant.

Amazon’s operating system, Fire OS, is Android-based but not Android as you know it. That means you can get most of the major Android apps for Fire OS, including Netflix and the CBeebies apps, but you can’t get Sky Q or Sky Kids, for instance. You’ve been warned.

As long as you’re not expecting too much for your money, the relatively low-resolution screen and slightly slow performance shouldn’t bother you. The eight-hour battery life is a little disappointing, though, and means you’ll have the Fire 7 on charge more than you might like. Since little ones tend to be pretty rubbish at remembering to charge stuff, that’ll be your responsibility. Sorry.

The cameras will satisfy kids taking novelty photos, but they’re really very poor in quality, so don’t expect your little ones to be taking anything worthy of actually keeping.

And now to the real reason to consider this ahead of other, non-Amazon tablets: that one-year subscription to the Fire For Kids service. In essence, it’s a simplified overlay for Fire OS and it provides access to swathes of age-appropriate content.

Fire For Kids is opened just like any other app and gives you the option to add profiles for each of the children who’ll be using the tablet. Firstly you need to let it know their name, age, gender and the profile pic they’d like to use. You can also decide whether to assign them a standard Fire For Kids account or give them a Teen Profile, for children aged 11 and older. I couldn’t really spot much difference between the two.

Once your kid is signed in, they have a choice of content type: Books, Videos, Apps, Characters, and (if you’ve given them permission within the app) Web. They can also search by title or use the camera. All of the categories are full to the brim with content, and unlike with some kiddy tablets, you’ll even recognise most of it – most are well-known brands rather than cheapo filler content. 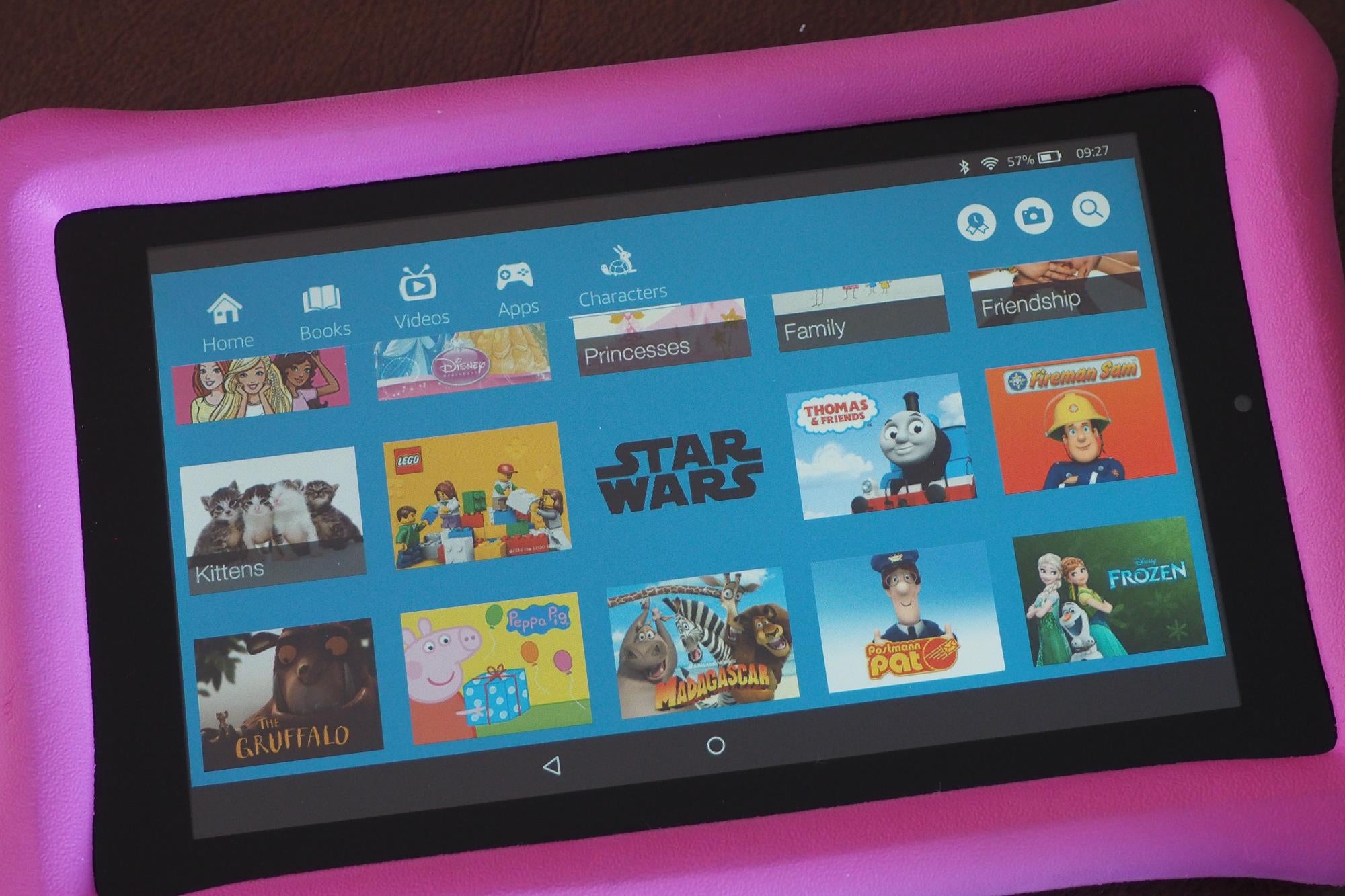 Browsing by character, for instance, reveals a load of familiar faces: Harry Potter, Gruffalo, Postman Pat, Thomas the Tank Engine and a shedload more. There are also sub-categories such as Dinosaurs, Trains, Princesses, Sports and Superheroes.

Unfortunately, there isn’t any real structure to the category lists, so something like Videos can be a bit overwhelming, and so a lot of good content might never be discovered by your little ones.

Some of the apps can take a long time to download, and the progress bar isn’t very obvious, so you might get your kids whining about the tablet being unresponsive when they just haven’t noticed that it’s actually doing something. Books are much quicker to download, and videos stream almost instantly – although you do need constant Wi-Fi for the latter, so don’t expect to have things to watch for long car journeys and flights.

Handily, you can also download standard Fire OS apps – such as CBeebies Playtime Island – through your adult account and just add them to your child’s approved apps list. I’ve found this really useful for my son, who’s a little older, as much of the Fire For Kids content is still targeted at younger kids.

Amazon has provided a custom web browser with Fire For Kids which can be set to show a curated set of Amazon-approved bookmarks. Any other websites have to be manually put on the approved list – although, in the case of YouTube, you can only approve specific videos rather than the whole site, which is both a blessing and a curse.

Within the Fire For Kids Settings page, you can also set daily goals and time limits. You can specify what time of day your child’s profile can be accessed, for how long per day, and whether you want to set them a goal, such as a minimum of 30 minutes reading books. 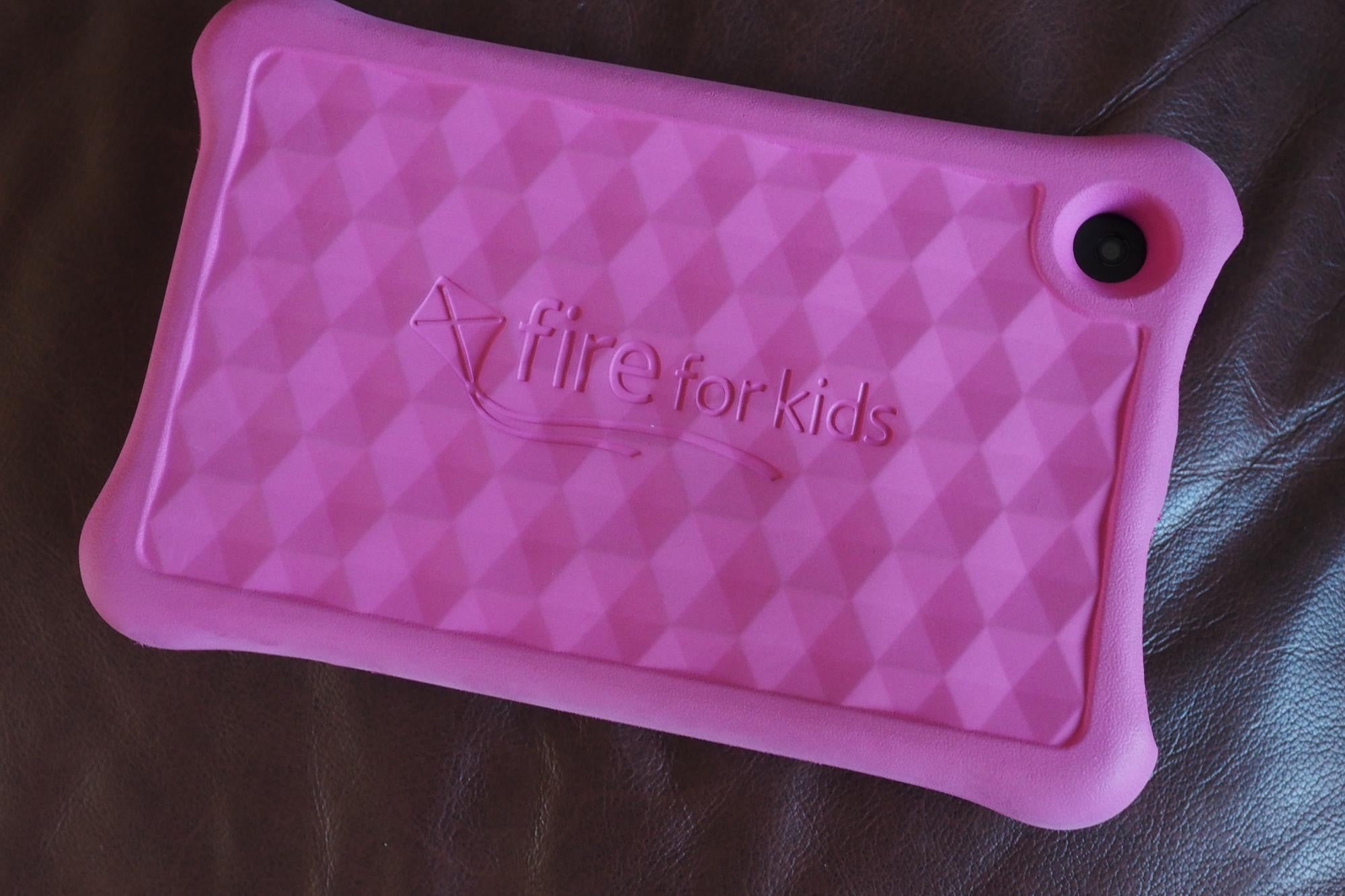 Taken purely as a hardware proposition, the Fire 7 Kids Edition looks terribly underwhelming – ageing tech concealed in a blobby case. But the Fire For Kids content and two-year warranty are what you’re really paying that little bit extra for. There’s an amazing array of videos, games, books and educational apps available here.

For a sharper screen, extra storage and longer battery life, the HD 8 Kids Edition is worth splashing out the extra cash for, but the Fire 7 is still a good buy if you’re on a tight budget.

The hardware may not be great, but the year of amazing free content still means this is worth the money.