In terms of functionality, the Amazon Echo Link Amp has some positives – but, importantly, nothing about the way it sounds is very pleasing

What is the Amazon Echo Link Amp?

It may easily have been missed during Amazon’s announcement of multiple new products last September, but in amongst the microwave ovens and wall clocks, there were a couple of hi-fi products. We’re talking here about “hi-fi” in the traditional sense; not the company’s vast range of smart speakers.

The first such product is the Echo Link, a streaming module designed to bring some modernity (as well as some Alexa voice control) to an existing stereo (or home cinema) system – an it’s on sale right now. The other is this Echo Link Amp, which will be available to buy from May 9th.

If you hanker after an old-school source/amplifier/speakers stereo system with some voice control smarts and multiroom possibilities then the Echo Link Amp would currently seem to be the only game town. Whether or not it’s worth the outlay of over £290, well… that’s a different matter.

In tech terms, it’s a fine line between “understated and sophisticated” and “bland and anonymous” – and it’s one Amazon is treading fearlessly with the Amazon Echo Link Amp. Whether you consider a small (H9 x W22 x D24cm), unbranded black box built from the sort of plastic that’s a magnet for fingerprints to be sophisticated or bland is very much a question of personal preference. 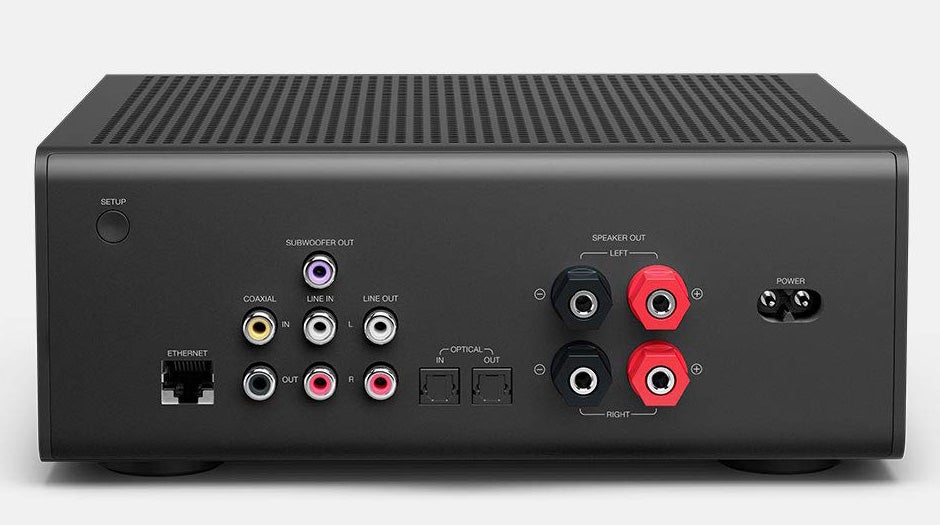 Personally, I quite like the minimalism of a fascia that features only a volume control and a 3.5mm headphone socket. Even the little LEDs around the volume knob that illuminate when you adjust volume level don’t stay on very long. It’s almost as if the Echo Link Amp doesn’t want to draw attention to itself.

The box features gentle curves at top and bottom of the fascia, and the top and bottom panels are vented for efficient heat dispersal. And that’s your lot.

The back of the Echo Link Amp is busier than the front. As well as a figure-of-eight cut-out for mains power, the rear panel features stereo RCA analogue inputs and outputs, digital optical in and out, digital coaxial in and out, an Ethernet socket, and a pre-out for a subwoofer (sadly, the Echo Link Amp can’t wirelessly drive Amazon’s rather good Echo Sub subwoofer). There’s also an “action” button for use during setup.

It isn’t the most extensive set of physical connections seen on a stereo amp, but there’s Wi-Fi and Bluetooth connectivity available, too – Amazon is being a little coy about the version of Bluetooth on board here, but it’s safe to say it’s sub-aptX. There are also two pairs of winningly chunky binding posts for strapping on a pair of speakers.

Power is a claimed 60-watts per channel at a nominal 8-ohms load, and it’s of the class-D variety. Class-D offers both space- and energy-efficiency, and is more affordable to implement than any realistic alternative.

All the heavy digital-to-analogue lifting is done by a 24bit/192kHz DAC. The promise of high-resolution audio is welcome (even if the optical and coaxial inputs can only handle files to a maximum on 24bit/96kHz) – but there’s something of a catch.

Yes, the Echo Link Amp can play the 24bit/192kHz files you have sitting on the same network, but due to the lack of UPnP smarts, the Amazon can only access your hi-res audio via a server using Plex, Kodi or similar. What’s the opposite of “convenient”?

Related: This unbeatable Amazon Music Offer gets you an Echo Dot for just 99p

While I’m having a moan about convenience (or the lack thereof), the Echo Link Amp’s Alexa functionality isn’t quite as wide-ranging as might be considered ideal.

The Alexa app remains logical and straightforward; prioritising the Echo Link Amp as the preferred device in a specific room or system is easy enough. From there, the Echo Link Amp’s system can be added to a multiroom group for streaming in multiple rooms, or designated as part of an “everywhere” group in order to hear the same tunes throughout your home.

Once the Echo Link Amp is on your network, any mic-equipped Echo device on the same network can be used to relay voice commands. 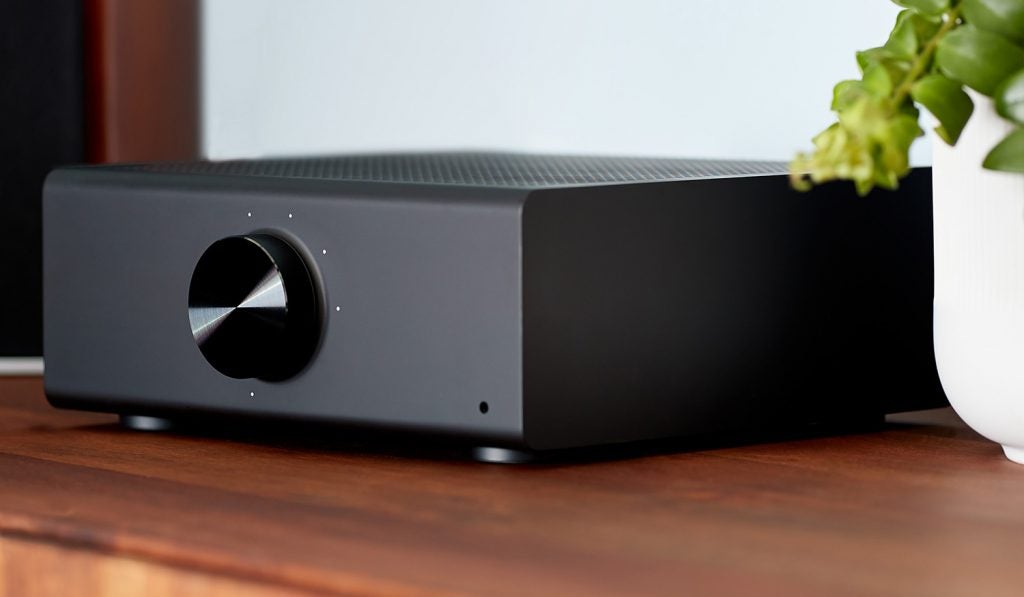 However, those voice commands are pretty limited. It’s easy enough to ask Alexa to “play Grace Jones on Lounge” (if that’s where your Echo Link Amp is situated); you’ll be enjoying “Pull Up To The Bumper” via Spotify in no time at all.

You can adjust the volume using your voice, too. But as far as skipping a track goes, don’t bother trying because Alexa can’t manage it. You’ll need to specify the song you want to hear. All other operations will need to be via the mobile device you’re using, which isn’t quite as hands-off as you may have been hoping for.

Source selection, for instance, relies on the hierarchy on inputs: streaming, Bluetooth, optical, coaxial, analogue. If you’re playing an analogue source and decide you want to hear some streamed music, the Echo Link Amp will override the analogue input immediately. However, if you’re listening to a CD player – say, connected to the optical input – then it will have to be turned off before you can make use of the coaxial input.

In terms of streaming services, Spotify is there alongside Amazon Music and TuneIn straight out of the box. It’s possible to add a Deezer and/or Apple Music account too. But, despite that hi-res DAC, the Echo Link Amp can’t handle anything above MP3-quality streams, so Deezer Hi-Fi is off the menu, and Tidal of any type is never on it.

In terms of audio performance, probably the first impression the Echo Link Amp makes on the new listener is just how quiet it is. Some 60-watt/8-ohms designs are capable of real, authentic loudness – but the Amazon just doesn’t get that loud, no matter how much you wind round the volume control or urge Alexa on.

As far as fidelity goes – the “fi” in “hi-fi” is too often overlooked – the Echo Link Amp demonstrates some areas of competence. It finds acceptable levels of detail in Grace Jones’ “My Jamaican Guy” – it has the necessary punch to underpin the tune, and the stage on which it positions all the performers is broad and quite well defined. But in terms of outright tonality it sounds like several different amplifiers all at once.

While acceptably weighty, bass sounds don’t have the discipline to move forward in unison with all the information above them. So, effectively, they drag at a song and give the impression of a tempo that’s bogged down. At the opposite end of the frequency range, treble sounds are hard to begin and become more so as they approach the mid-range. As a result, percussive sounds are too bright and share little common tonality with the information beneath them.

Add rather half-hearted dynamics and a rather slapdash approach to timing and integration to the recipe, and the Echo Link Amp is of very localised appeal. It’s simultaneously a bit tedious and a bit edgy – which is no one’s idea of a good time.

Related: Amazon Echo guide – Tips and tricks to get more out of your smart speaker

If you’re deep in the Amazon Alexa ecosystem, or you want a much more compact stereo amplifier than most brands build, the Echo Link Amp is worth investigating. Unfortunately, all the compelling reasons to buy one have nothing to do with the sound it produces.

The problem is that it’s currently number one in a field of one. Sonically speaking, there are numerous stereo amplifiers for this sort of money that wipe the floor with the Echo Link Amp – but none of them have an integrated voice-control element and all of them are bigger.

But, let’s be frank: the most important thing about a stereo amplifier is the way it sounds. In this respect you’d be wise to cast your net wider. Consider the Cambridge Audio Topaz AM10 integrated amp, which offers 35 watts per channel, and has the decency to sound like it – and it has a phono stage for amplifying a turntable. It doesn’t have a DAC, and you’ll get nowhere by shouting at it, but it costs £200 and in pure audio terms leaves the Amazon in the dust.

Or, take a look at the Marantz PM6006. Design-wise it’s a few years old now, but as a consequence it’s now available for Echo Link Amp money. Again, there’s no voice control, no multiroom possibilities – but it features a 24bit/192kHz DAC, some digital inputs and a phono stage, and it’s an authentically sweet-sounding, thoroughly sorted stereo amplifier.

If you want a stereo amp for listening to, rather than talking to, you’ll lose nothing by ignoring this Amazon.

In terms of functionality, the Amazon Echo Link Amp has some positives – but, importantly, nothing about the way it sounds is very pleasing.