The Amazon Echo Dot with Clock is a great addition to the Echo range of speakers. You get all the benefits of the current Echo Dot – including neat looks and powerful audio for speech – and the clock on the front makes it the ideal bedside companion, if you don't want a smart display. The screen shows timers, temperature and alarms as you set them. Expanding the Echo lineup to provide greater choice, the Amazon Echo Dot with Clock is another great way to integrate Alexa into your home.

Companies often like to use product names that confuse, but no so with Amazon’s latest device; the Amazon Alexa Dot with Clock is exactly that. The bigger question is whether the decision to build a clock into an Echo Dot makes for a worthwhile product? The answer, in the main, is yes. Of note with this product is that Amazon has expanded its range of smart speakers to provide customers with yet more choice.

Amazon Echo Dot with Clock design – Just like an Echo Dot (3rd Gen), only with a clock on the front

Unboxed and powered off, the Amazon Echo Dot with Clock looks and feels identical to the Echo Dot (3rd Gen). The full product name (All-new Echo Dot (3rd generation) | Smart speaker with clock and Alexa, Sandstone fabric) should reveal that the reason the two products look the same is because they sport identical cases and both measure 83.5 x 83.5 x 32mm. 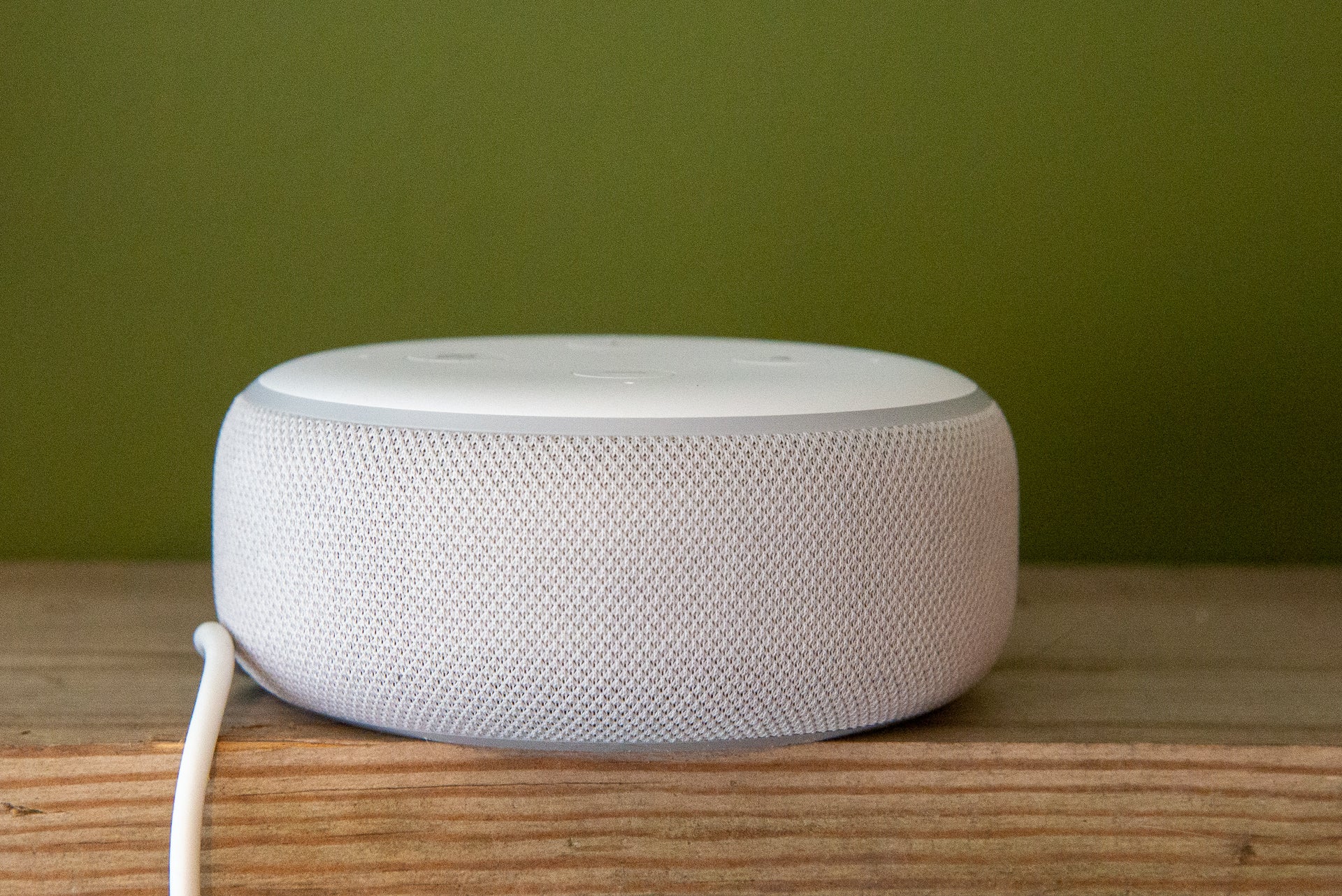 Without the clock, this product looks like the current Echo Dot

This isn’t a problem in my eyes, since the Echo Dot 3rd Gen was a great product. Ditching the plastic, functional exterior of the previous generation Echo speakers, Amazon created a neat device that fit more easily into your home.

Powering on the Echo Dot with Clock showcases the point of differentiation: an LCD screen that shines through from beneath the material finish. It’s neatly done, turning the Echo Dot from being just a smart speaker into a handy bedside assistant. If you’ve been hankering after an Echo beside your bed, but haven’t wanted a device with a screen in the vein of the Echo Show 5, then you’ve got a winner here. 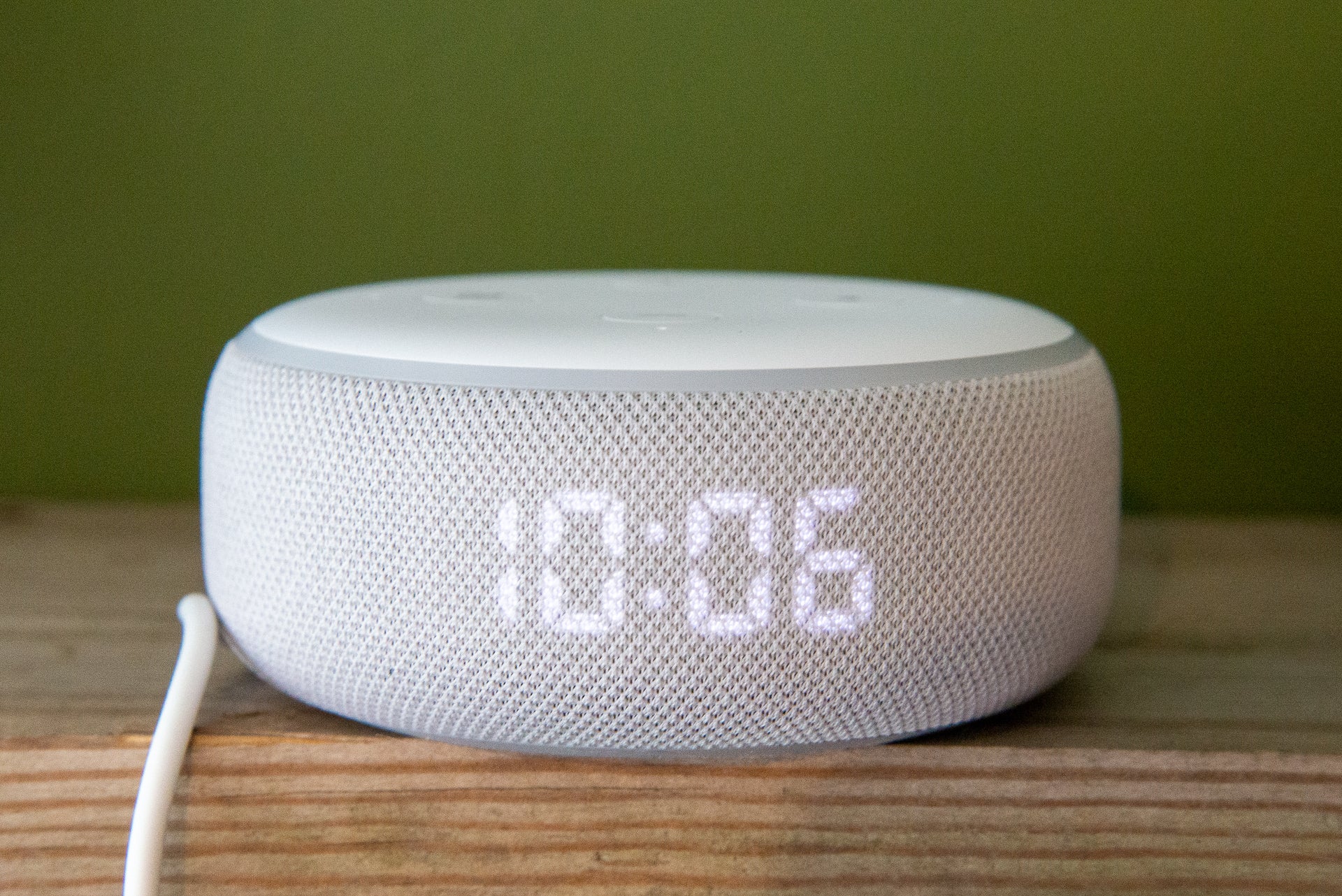 Ports and controls-wise, it’s business as usual. The Echo Dot with Clock has volume buttons, a microphone mute and an Alexa activation button on top. At the rear is a power input and a 3.5mm output that you can use to hook up the product to a set of external speakers. You can also use Bluetooth to do the same job; if you’re going to do this, then the Echo Input might make more sense. 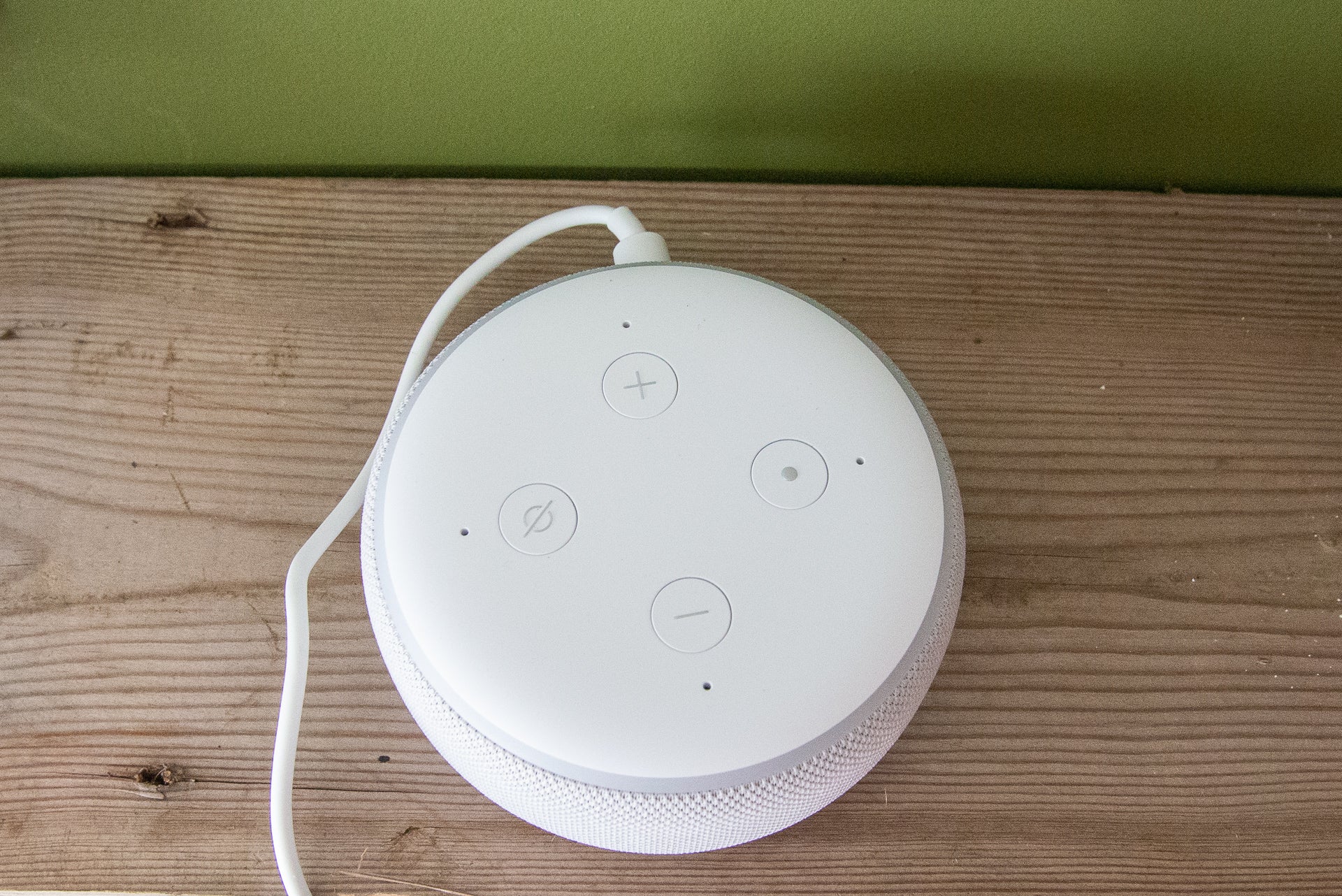 The controls are the same as for any Echo smart speaker

Amazon Echo Dot with Clock – Handy as a clock, but you can also see the weather and timers

At its most basic, the Amazon Echo Dot with Clock’s screen displays the time. Head to the app to change the regular 12-hour clock to 24 hours. From the app, you can also set the screen’s brightness – although you can do this via voice instruction, too. Note that the default Adaptive Brightness setting does a pretty good job at regulating the screen. 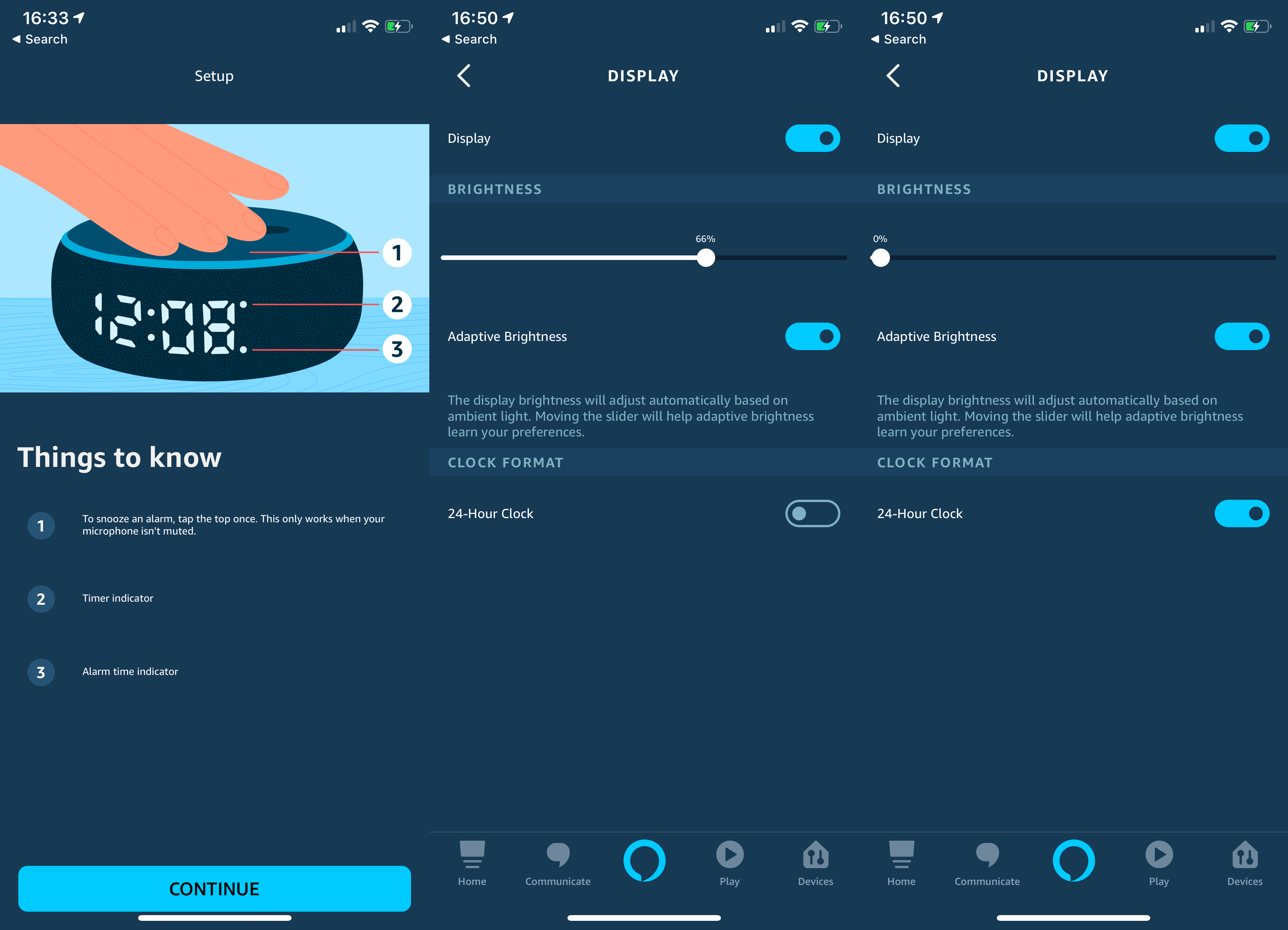 The app lets you control the display

You should be able to sleep with the screen on – the Echo Dot with Clock is no brighter than a regular LCD clock. However, if it does bother you then just say, “Alexa, turn off display”.

As well as  the time, the screen also displays an alarm when you set it, providing a visual indicator that you’ve set the right wake-up time. The display then switches back to the time, with a “dot” indicating that an alarm is set.

When the alarm goes off, you can tap the top of the Echo Dot to temporarily snooze the alarm; you have to use your voice to turn it off completely. In this regard, the Echo Dot with Clock is a perfectly serviceable alarm clock.

The display also shows any countdown timers you’ve set. If you set multiple timers, the Echo Dot with Clock shows the countdown for the one that has the least amount of time left. You can ask to see how long is left on the other timers to get visual and voice confirmations, although the display always switches back to the timer with the least amount of time remaining. Once the first timer has ended, the next timer will display on the screen. 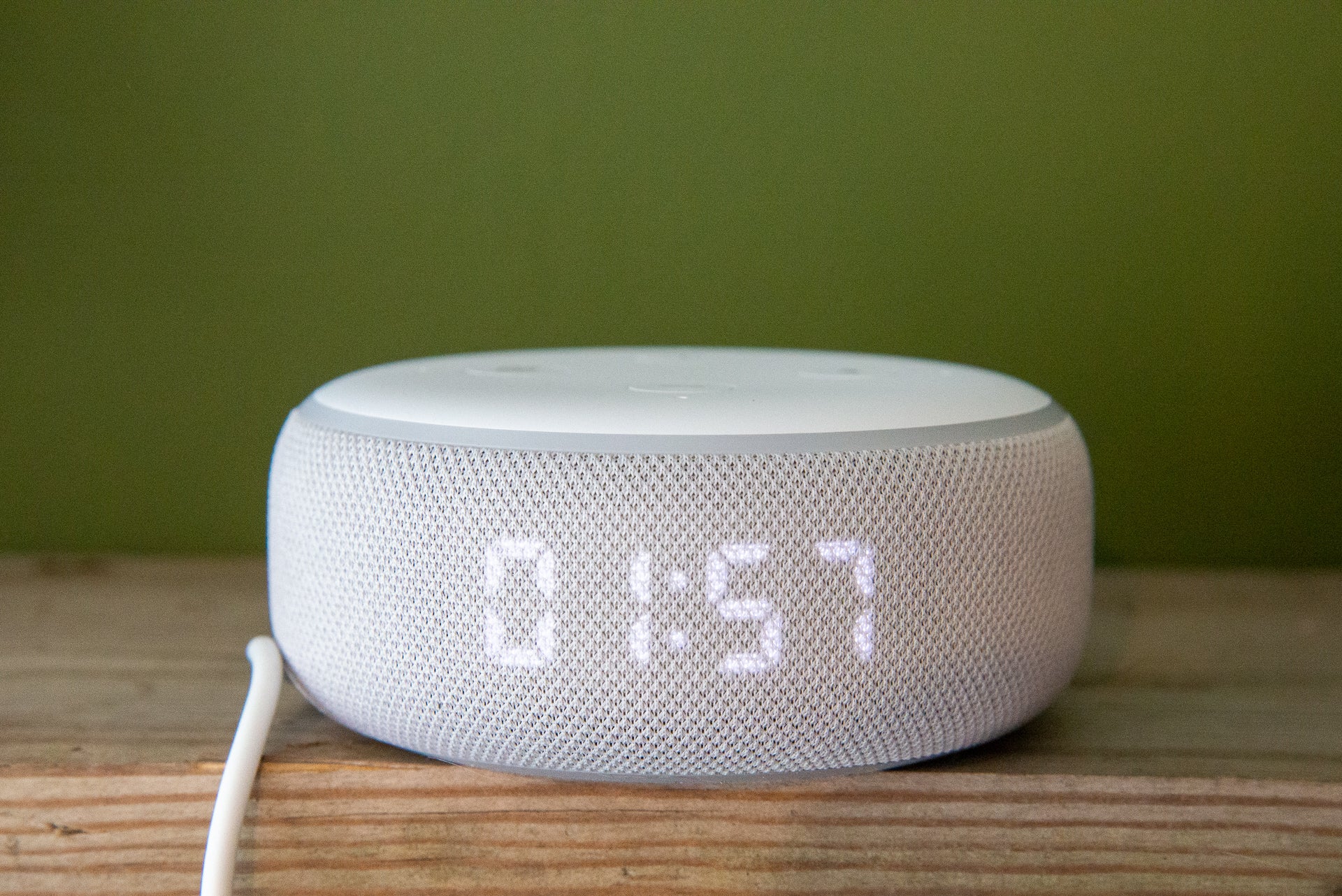 As such, the Echo Dot with Clock could be a great kitchen accessory – although you may find it easier to buy an Echo Wall Clock, since it’s a bit easier to see. Finally, request weather info and the display will flash up the current outside temperature.

It’s a shame that the display can’t do a bit more – displaying the name of an incoming caller if you use Alexa Voice Calls, for example. The display might be small, but there’s no reason that it couldn’t show a scrolling message.

Once again, as Amazon Alexa runs in the cloud, you get the same range of features here as you do on any other Echo speaker. For that reason, there’s a separate guide to Amazon Alexa that covers all the features you can expect, regularly updated with the latest information.

As with its predecessor, the Echo Dot with Clock works brilliantly if you’d like a device for smart home control. Thanks to its small size, this Echo speaker can be placed conveniently out of the way, providing voice control over smart devices around your home; even letting you create powerful Alexa Routines. When it comes to smart home control, Amazon Alexa is far ahead of the Google Assistant.

Alexa does well as a general assistant, too, answering questions, informing about upcoming appointments, and letting you make voice calls for free to UK landlines. More functionality can be added through Alexa Skills, thousands of which are available in the app.

Amazon uses four far-field microphones to pick up sound, with the Echo Dot with Clock generally responding to the wake word without issue. In particularly noisy environments you might need a louder “Alexa!” to make yourself heard, but I generally didn’t encounter any problems.

With the Echo Dot (3rd Gen), Amazon worked hard at boosting the sound quality. The Echo Dot with Clock carries the same 1.6in speaker as the regular Dot, producing identical sound. Given how small the speaker is, the sound is impressively loud and clear.

In terms of voice responses, you can hear exactly what Alexa is saying, with each word clear and detailed. For the odd bit of radio or even the occasional music track, the Echo Dot with Clock sounds pretty good, with loud and clear audio.

Sure, you lose some of the detail, plus audio becomes compressed in the mid-range, but there’s some punchy bass on display, too. For occasional use or mostly radio, the Echo Dot with Clock is more than good enough. Those looking for a speaker specifically for music listening should check out the Echo 3rd Gen.

You can even add in an Echo Sub to improve bass. Both tricks work to a degree, but there are limitations in terms of the Echo Dot’s capabilities; you’re looking at marginal improvements. Both the Echo Sub and stereo pairing are better used with the Echo Plus – or, even better, buy a Sonos One.

Should I buy the Amazon Echo Dot with Clock?

If you’re looking for a device purely for smart home control, in a room that already has a visible clock, then there’s little point buying this model. You’re better off opting for the standard Echo Dot (3rd Gen).

Ultimately, the Echo Dot with Clock expands the number of options on offer. If you can use the clock features, they’re implemented brilliantly, making the additional cost over the standard Dot well worth it.