Amazon Echo Buttons are a cheap way to run Amazon Alexa Routines, making them interesting for anyone that wants manual control. However, with only a single interaction (one push), these buttons don't give the nuanced control of other smart buttons, curbing their use to just simple tasks. As at launch, Echo Buttons can be used for games, although the limited selection means that you'll soon get bored, with the kit relegated to a spare drawer.

Initially launched as a means to play interactive games with your Amazon Echo speakers, the Amazon Echo Buttons were fun for a while but quickly became less so. Today’s Echo Buttons let you trigger routines, thereby turning them into smart buttons that can action almost everything you can with your voice.

If you’re looking for a quieter way to control your smart home, the Amazon Echo Buttons could well be of interest. A low price helps, although the large size and cheap design may put folk off.

Amazon Echo Buttons design – Cheap and cheerful, but on the large side

Long before the Echo Wall Clock, Amazon was already experimenting with Alexa add-ons with the Echo Buttons. Initially designed to be used for games, recent updates have made them slightly more useful. Their low price, too, is a bonus. Given that most smart buttons, such as the Flic Hub, are comparatively expensive, it’s good to see a two-pack of the Echo Buttons costs just £19.99.

One reason that the buttons are cheap is because they connect via Bluetooth, and have to be paired to a single Echo speaker.

If you’re planning to use the Buttons for smart control, it makes sense to pair them to the Echo speaker that’s closest to where you want them to go. Setup is straightforward: it took me only a few minutes to get the Buttons paired. Each Echo Button is powered by 2 x AA batteries, which are included. 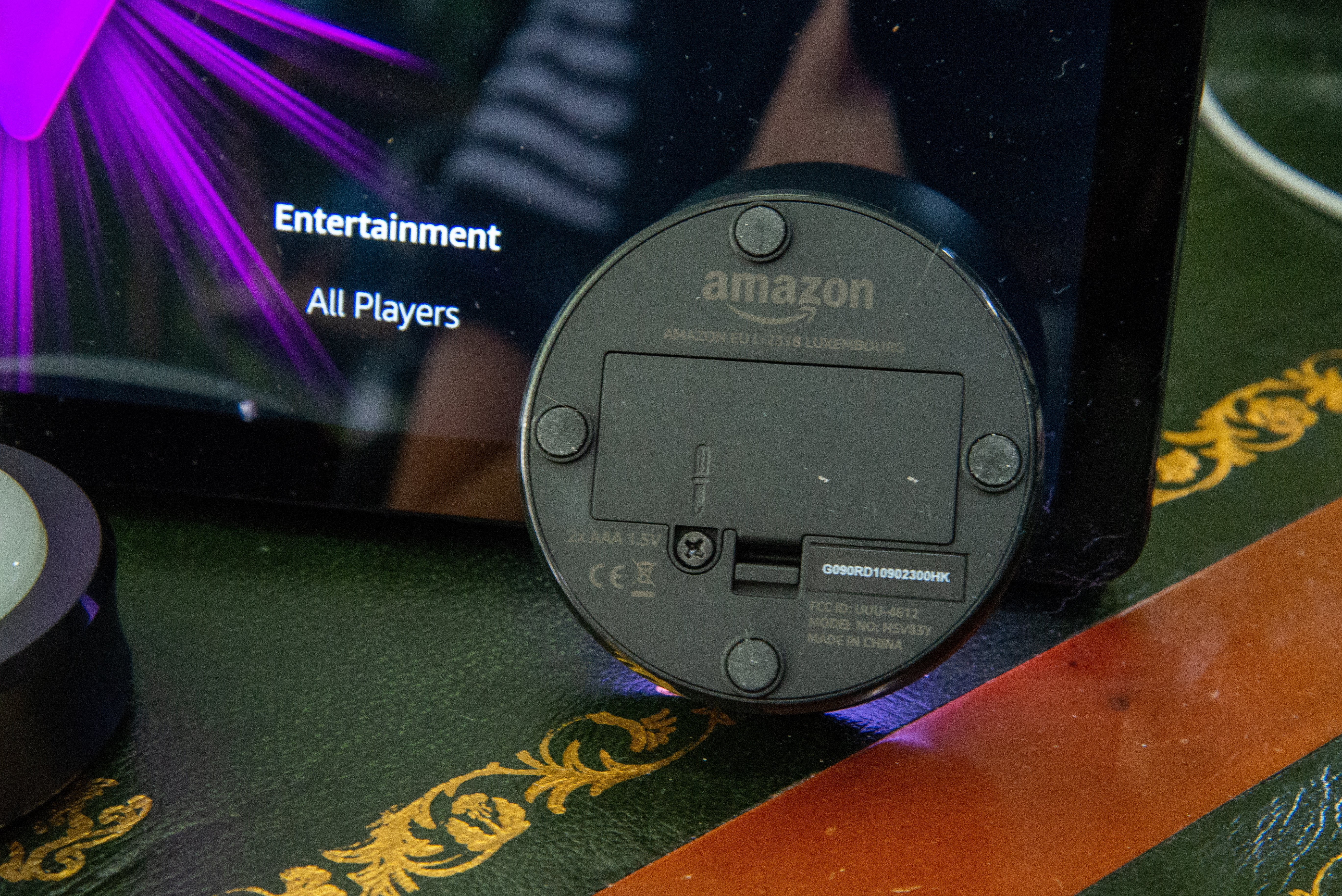 Working out where to place the Buttons is a slightly harder job, since the hockey-puck-sized devices are considerably larger than those of the competition. This is mainly as a result of their original intended use as game-show buzzers for interactive games, where it’s more important to have a large surface to hit rather than a discrete button to tuck out of the way.

You can leave the buttons on a surface, or – with the help of a bit of double-sided tape – stick them to a wall. Either way, the Buttons aren’t particularly easy to place discreetly. Chunky and plasticky, these buttons are hard to place discreetly

The Echo Buttons aren’t particularly attractive either, exhibiting a cheap, plasticky feel. On top of each button is an opaque dome; this lights up in different colours depending on how the button is used.

Thanks to an app update, Amazon Alexa routines can now be triggered by an Echo Button. To do this, you create a new routine, and select Echo Button as the “When this happens” part. You then just have to press the Echo Button you want to use and you’re good to go. Then, every time you press the button, the routine is run.

If you want to control your smart home, Alexa routines give you the same level of control over your devices as the app. Control is massively device dependant, however. For example, with a Nest Thermostat you can set a temperature but you can’t change mode; with the Honeywell Evohome system you can trigger quick actions, but you can’t set a zone to a specific temperature. 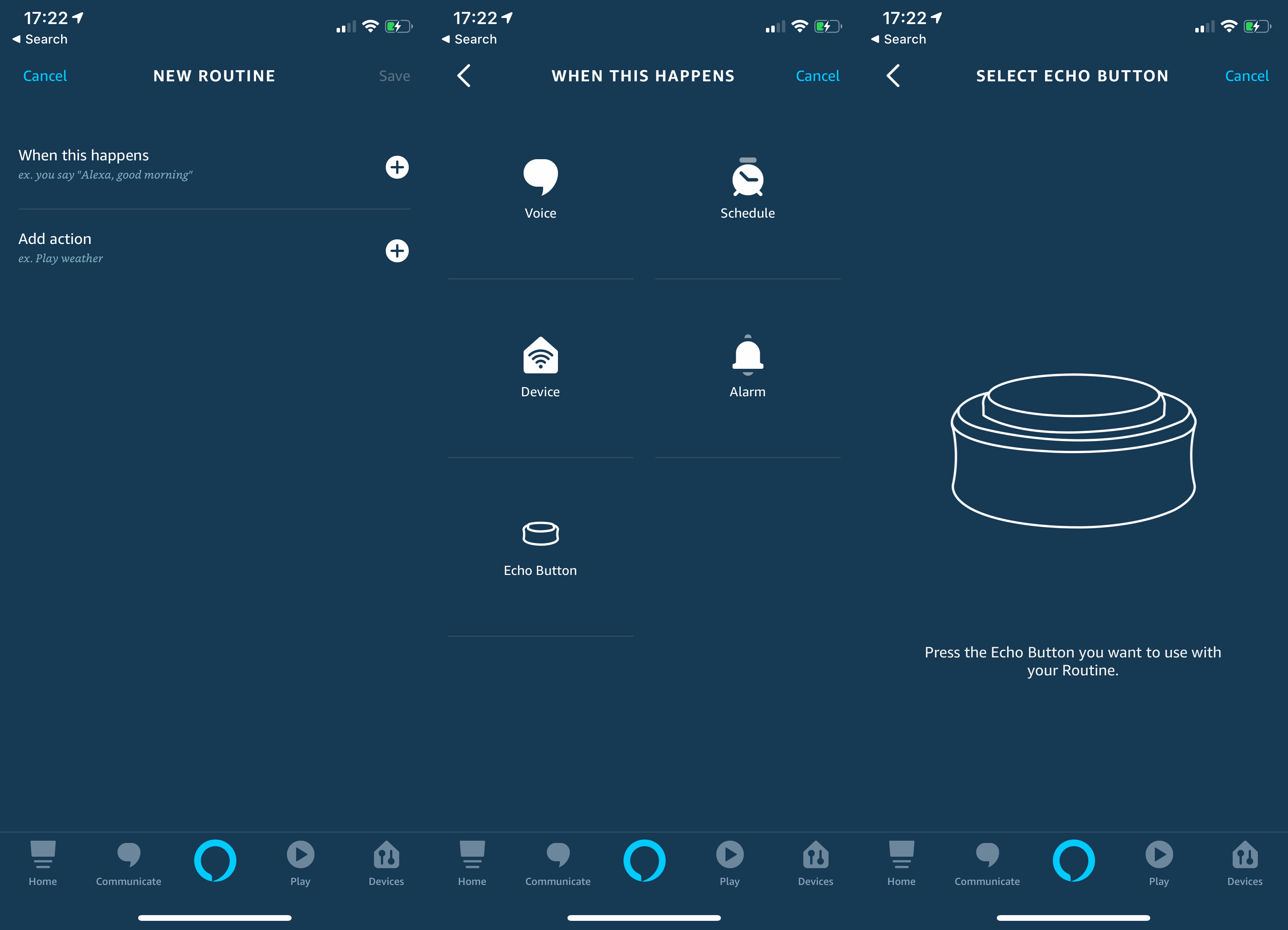 Nevertheless, triggering a routine in this way is handy in specific situations. For example, having an Echo Button by the front door that shuts down your house when you leave to go out. However, there’s one major problem of which you should be aware: Buttons operate only on a single press. Most other smart buttons offer multiple interactions. For example, Flic buttons offer interactions via a single press, double-press and long-press.

Having multiple interactions is important, since it means you can set up one device to do multiple jobs. For example, if the Echo Buttons supported a press and double-press, you could have one action to shut down your house, and the other to turn it back on when you get home.

As it stands, each Button can trigger multiple routines at the same time, but you can’t use a single Button to trigger two different routines at different times.

In addition, you can’t use a Button to directly control a device or group, with the option to toggle. For example, the first press of the Button would turn on lights, and the second press would turn lights off. This feels like a missed opportunity.

Amazon Echo Buttons games – A bit of fun, but you’ll soon get bored

Amazon Echo Buttons were originally designed for games, and there are a fair few available. There are a number of trivia-style quizzes, such as Trivial Pursuit Tap. Up to four players can play, using the Buttons to buzz-in to answer a question in a category.

Buttons light up the same colour as the category when they’re ready to be pushed, and flash red if you answer incorrectly. The game is fun, although there are some rather odd questions – is “Who’s taller, Saddam Hussein or Osama Bin Laden?” really an entertainment question?. Although the bigger issue is that buttons are sluggish to wake up and connect to an Echo, making the game feel slow.

Testing the Buttons by pressing two at the same time, I found that the system tended to favour one of the two every time. I tried switching hands, but it was the same button that always got preference.

Then there are games such as Button Monte, which works like Three-card Monte. You can use between two and four buttons for the game. One lights up red shortly before they all turn yellow. The “trickster”then shuffles the Buttons around, while the “watcher” keeps an eye on it. When the buttons go green, the “watcher” has to tap the Button that they think was red.

There’s some fun to be had, but the initial excitement quickly wanes. I found that Buttons tended to get put away and weren’t used again.

Should I buy the Amazon Echo Buttons?

The main reason to buy the Amazon Echo Buttons is because they can be used to run routines. If you’re looking for a cheap way to do this, then they’re a decent choice, provided you don’t mind their size and cheap look.

Even then, you have to be prepared to live with their limitations: if you want a cheap way to, say, turn lights on and off, then you’d need one Button for each task – which isn’t ideal.

Ultimately, Echo Buttons are a cheap way to run Alexa routines in a limited way, but it would be better if Amazon allowed integration of smaller, neater smart buttons, such as the Flic Hub buttons.