“Llamas equal points!” bellows the tutorial stage of Alto’s Adventure, uttering a sentence that has surely never made it into a video game before.

It’s these aforementioned llamas that, at least on the surface, act as your motivation throughout play – their escape from your precariously placed camp at the top of a mountain range causing you to mount your snowboard and set off in pursuit, triggering a fast-paced adventure that can ultimately only end up with you landing face first in a pile of snow. Or, if you’re particularly unlucky, crashing directly into a rock face. 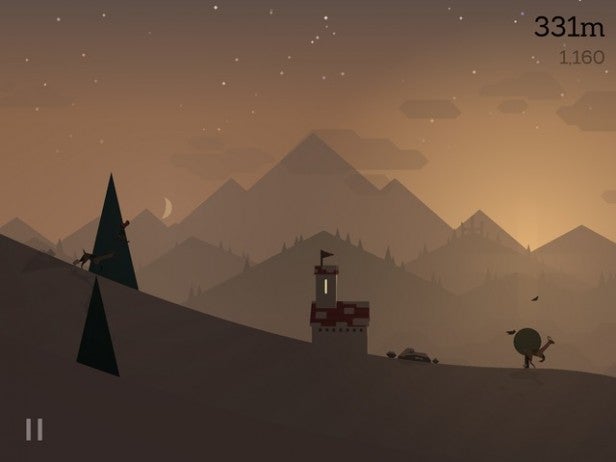 But while the heavy signposting in Alto’s Adventure’s initial run isn’t lying – picking up llamas does indeed win you points – chasing them down is actually something of a side show. This endless runner is all about speed, timing and survival, and while gaining on a pack of llamas on the side of a snow laden mountain may be a fresh concept, the staples Alto’s Adventure is built upon have arguably been around since Canabalt.

As in all endless runners, your methods of interaction are actually kept fairly limited. Gravity takes care of your momentum – the game nicely fusing its title screen with the opening of play, Alto grabbing his board and flying off as the llamas make a run for it with your first tap of the screen – meaning all you have to do is jump. 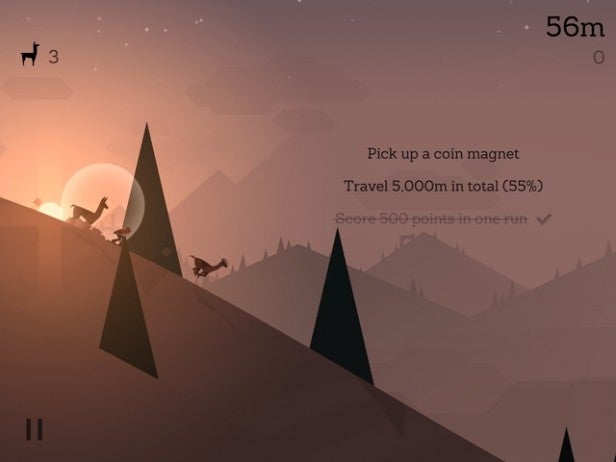 There are, of course, different kinds of jumps on offer. A tap of the screen will help you clear a small rock formation, for instance, but if you want to grind along a line of bunting, or clear a giant chasm in your path (handily marked with warning signs), a more sturdy and well-timed prod of the screen is required. Airborne tricks, meanwhile, which help build up your pace after a successful landing, are a case of holding your finger down long enough to pull off a 360 degree loop, making sure your feet tally up with the land below when gravity pulls you back down.

Like all endless runners, timing is the be all and end all in Alto’s Adventure, the leagues that have gone before. Dig a little deeper into the snow, however, and it’s possible to unearth canny qualities that are designed to extend the game’s run beyond that of its peers. For starters, as well as having randomly generated stages – the standard technique employed by all in the genre – levels also take place at different times of the day and night, meaning sometimes you’ll have a crisp, clear day allowing you to see all obstacles ahead, while at others you’ll be boarding during the deep, dark of night, adding an extra thrill to proceedings. 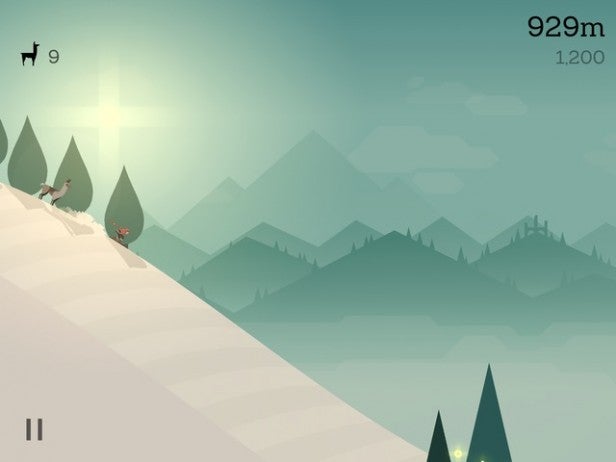 Alto’s Adventure also has a goal system designed to encourage you to level up. Each of these levels comes with three goals to achieve – jumping over a set number of rocks, for instance, or back flipping over a chasm, amongst others – in order to show off your snowboarding prowess. In practice this actually makes very little difference other than being able to show off amongst your friends, but it’s surprising just how enticing the idea of ticking off each target is.

There’s also a Workshop where you can spend the coins you pick up along the track during your runs, which enables you to extend the length of the few bonuses the game has on offer. Spend a few pennies, for instance, and you can draw coins towards you with the magnet timer bonus for just that little bit longer. Stringing together tricks also extends the length of your scarf, and if you’re willing to spend 7,000 coins, you’ll also be treated to a Wingsuit, enabling you to take to the skies in the process. 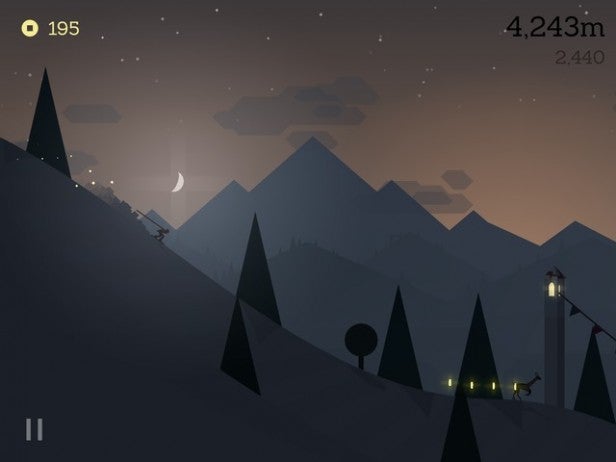 None of these bonuses make a huge amount of difference to the game, nor do the goals give you anything tangible as a reward, but they are a handy hook for Alto’s Adventure, given most endless runners rely on simply beating your own score – or those of your friends – as a reason to play and play again.

As such, it wouldn’t be fair to suggest that Alto’s Adventure does anything especially grand or new, but developer Snowman has nevertheless managed to serve up something of a poster child for the entire genre: If you’re new to endless runners, this is the perfect place to start. Just don’t count on being able to stop sliding down that ice once you set off on that initial run.

Verdict
A solid, stable endless runner, Alto’s Adventure doesn’t really bring anything new to the genre, but its slick and sleek run on the snow benefits from bonuses designed to keep you engaged and a day and night progression that helps to ensure each play is different to the last.