Most iPod docks are not renowned for offering a bold, expansive sound. Their small stature and necessarily close-packed speakers tend to limit the stereo image and amount of bass they can produce. The Altec Lansing Octiv 650 attempts to get around this by including a 4in downward-firing subwoofer driver as well as two full-range 3in drivers. A bass-led approach risks producing over-ripe sonic fruit though, especially when you’re asking for Â£180.


The Altec Lansing Octiv 650’s design is simple. Our review sample was the all-black model, although we’ve been told that a slate grey edition will be available later in the year. Front-on, all you see if the black grille, iPod/iPhone cradle and the small Altec Lansing badge. It’s a lot more stylish than Altec Lansing’s previous efforts – less brash than the inMotion Max, classier than the inMotion Classic and less ridiculous than the Altec Lansing Mix boombox. It’ll look right at home in a modern lounge or kitchen. 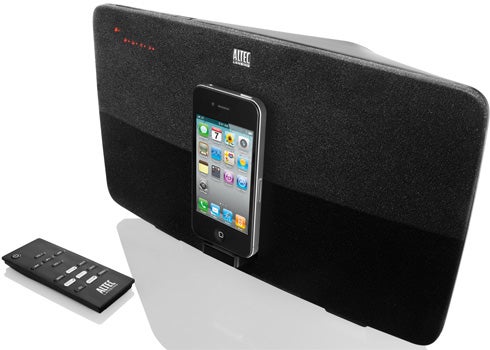 There are things going on behind the grille apart from the vibrations of those speakers though. There’s a set of blue LEDs that show you the state of various settings when the remote or physical control buttons of the Octiv 650 are pressed. The row of five LEDs tells you the bass level, treble level or volume – or if no controls have been pressed recently a single LED lights-up to show the dock’s on. We’d have appreciated being able to dim this light, but otherwise it’s a tasteful, clear and surprisingly intuitive way to relay information.


Controls for the bass, treble and volume, as well as basic playback and power buttons, sit on the top of the dock, while there’s also a remote control that offers these options and more. With the remote you can also navigate through your iDevice’s menu system and pick EQ presets, as well as choosing your own custom setting. It’s useful, but it feels cheap. It’s a slim, light rectangle of plastic powered by a watch-style battery, and displays none of the design nous of the main unit. 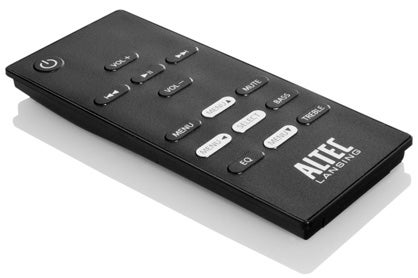 Thanks to its additional subwoofer, which uses a large 4in drive on the bottom of the unit, the Altec Lansing Octiv 650 extends a little further back than some other iPod docks. Take note if you’re planning on placing an iPod dock on a slim mantelpiece. 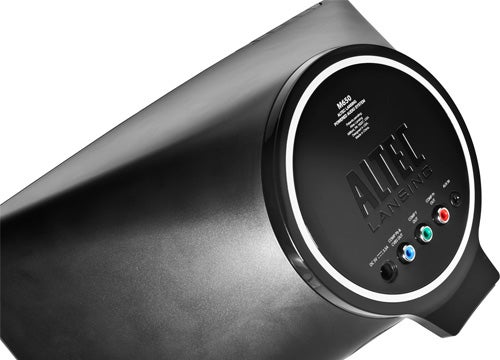 On the back of the dock are component outputs for sending videos from your iPhone, or iPod Touch to a TV and a 3.5mm auxiliary input jack. These two features increase the versatility of the dock significantly, letting you use it as an upgrade for your TV’s own most-likely limp speakers and a video station. The Octiv 650 could have improved its feature list with an optical audio out, but as this would be doing-down the built-in speaker array we can understand why it has been left out.

The Altec Lansing Octiv 650’s key sonic feature is its 4in bass driver, which sits on the bottom of the dock, blasting sound out onto whatever surface the dock is sitting on. This design matched with the bass-heavy tuning of the set means its low end tends to boom away whenever it gets the chance, with no regard for your housemates, neighbours or ears. Altec Lansing clearly wants us to appreciate how much power the sub adds, but this dock goes a little overboard. 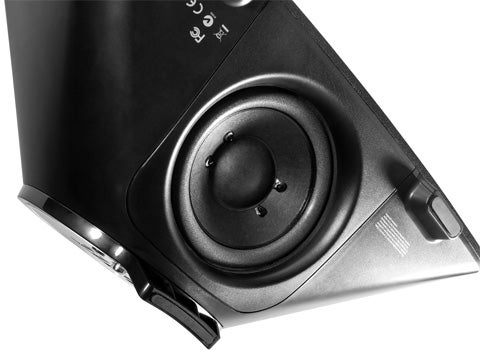 If this dock didn’t have a decent amount of bass control on-board, it’d be stuffed. To get a neutral, balanced, non-boomy sound, we set the bass to around 10 per cent of its maximum – and occasionally dropped down to the lowest setting available. Surprisingly, the Octiv 650 also benefits from a slight clipping of the treble too get a neutral tone – the high-end can sound harsh when cranked-up. Once we’d thoroughly poked and prodded the sound into submission though, the dock produced enjoyable, detailed and room-filling sound.


The sound is still quite positional, as the two main speakers are still as close together and as conservatively angled as other iPod speaker docks, but that small-scale feel of lesser docks is missing here. We wouldn’t call the sound high-end as such though, lacking the refinement, smoothness and resolution you’d get from more expensive speakers. If the dock form factor is the main appeal though, you can’t get such a sound at this price point. You’d need to either splash out significantly more on something like the Arcam rcube, or seek out a deal on an older separate-speaker dock solution like the Fatman iTube or Roth Charlie 2.1. 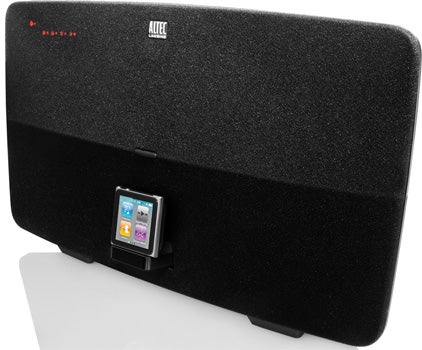 At the time of writing the free companion iPhone/iPod Touch app isn’t available, but we got to try out a pre-release version of it in action. Its main draw is a 7-band equaliser, which will give you more sophisticated control over the dock than the basic bass and treble controls. There’s also a visualiser, which can be outputted to a TV using the component output according to Altec Lansing. The app is something of a gimmick, one that the company has used with previous products, but a welcome one given how much work its out-of-the-box sound can benefit from.


We wouldn’t stretch to using the Altec Lansing Octiv 650 as our main music system, but as a second or bedroom system, or way to play a few tunes and boost your TV’s speakers, it’s great. In these applications, its low-key looks are a huge bonus too. But is it really worth Â£160? Altec Lansing’s biggest rival in this market is perhaps Klipsch, manufacturer of some of the highest-performing affordable iPod docks around. Its iGroove HG is a tempting cheaper alternative to the 650, but only has an S-video output and no sub-style driver, using dual 2.5in with dual tweeters on-top instead.


Stylish and much smaller than most subwoofer-toting iPod docks, the Altec Lansing 650’s design is a good fit for those who don’t want their living rooms taken over by a hulking great big Bowers & Wilkins Zeppelin Air or Philips Fidelio DS9000. However, trying to pack so much into a small frame has resulted in a boomy sound that often makes the additional sub driver seem more like a nuisance than a benefit. It can be tamed, but the bass performance is disappointing.