Lord knows there’s no shortage of iPod docks around, most of them utterly forgettable. However, though most will work with an iPhone, the handset must first be put into ‘Airplane Mode’ in order to enjoy music unimpeded by the interference from the mobile signal. Which, we think you’ll agree, rather misses the point of having an iPhone. What good is being able to listen to music if it means missing calls? Enter the Altec Lansing inMotion Max, which is one of a small number of systems with the electromagnetic shielding necessary for uninterrupted iPhone playback without Airplane Mode.


In addition to this key feature, the inMotion Max also offers an FM radio and an internal battery good for 3.5 hours of use. Consequently the system can be used as a portable speaker system or radio, either around the house or perhaps further afield. This is a useful option to have, though if you don’t need it then you’re obviously paying for a feature you might not use all that often. Still, it also has the added benefit of providing a battery backup in the event of a power cut, which might come in useful if you choose to use the system as your alarm clock.


For this, though, you will need an iPhone or iPod plugged in, since the inMotion Max doesn’t actually have a clock function of its own. Instead it will project the alarm chime produced by your iPhone/iPod when it goes off. Hardly a knock-out feature, but useful nonetheless, especially given your device will charge overnight when connected. 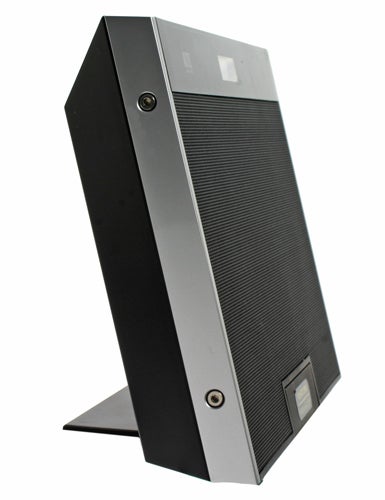 Given this alarm functionality, the inMotion Max is ideally suited to being a bedroom mini-stereo that could be moved around the house whenever the moment arises. However, while at first glance it looks as if it wouldn’t take up too much space, with the stabilising plate extended at the back, docking mechanism at the front and the 310mm wide footprint, the inMotion Max might be a little large for said task. Some may not mind too much, but it rather depends on how large your bedside table is and how much space you’re willing to relinquish.


Visually, it is attractive enough without really exciting. Its angular stance and minimalist fascia give it a contemporary look, but this classy appearance belies a slightly cheap feel to the device. Its plastics feel thin and cheap and the general fit and finish of the whole system could be tighter. So though the design does its best to promote a refined, stylish exterior, the reality is a little less exciting.

On the back are connections for the provided FM antenna, a 3.5mm auxiliary jack and the power input. There’s also a small recess for storing the remote control. We weren’t particular enamoured with the latter though; its buttons are irritatingly imprecise and lacking in positive feedback. Its actual functions are fairly limited, too. You get basic playback controls (play/pause, volume and next/previous), a ‘Source’ button and four shortcut buttons for recalling stations and toggling shuffle and repeat, but you can’t use it to actually navigate the iPod menus remotely. 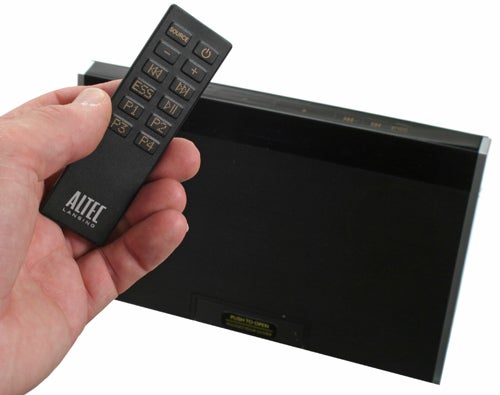 Up top, most (not all) of the remote’s controls are replicated with touch-sensitive buttons that work much better than those on the remote. Unlike the front-mounted display or the controls on the Logitech Pure-Fi Anytime these aren’t backlit on our review sample. Indeed, provided you don’t need the mobile battery powered aspect of the inMotion Max, the Logitech is a good alternative. It offers very similar features, including signal shielding, but does so for around £50 less.


Price is a big issue, too, with the inMotion Max retailing at £130 at its cheapest and up to £150 from many, while the Logitech system is around £75 to £80. It’s not as if the Altec Lansing system sounds £50 better, either: quite the opposite in fact. While it would be unfair to characterise its output as bad, it rarely – actually, never – surprises with its strength or quality. 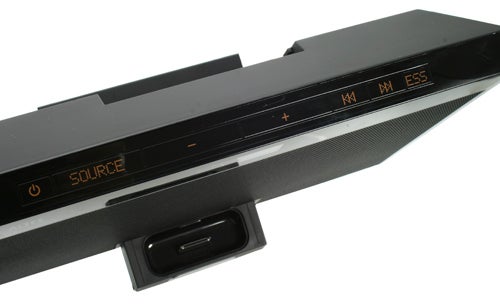 As is so often the case with these kinds of products and despite protestations to the contrary, there’s very little bass and depth to the inMotion Max. Even light, acoustic music suffers for its lack of dynamism, though at least vocals are produced with reasonable clarity. Naturally the system produces a very narrow soundscape as well; a problem not rectified by the ‘ESS’ mode that’s supposed to widen it to “fill a room with sound”. All it really does is flatten the sound to destroy any detail already being produced.


Ultimately, though it does a passable job with varying styles of music, the inMotion Max doesn’t reflect the sizeable price it demands. That’s fine if all you’re after is convenience (and you view that as a premium feature) but for the price we’d like a little more than that. 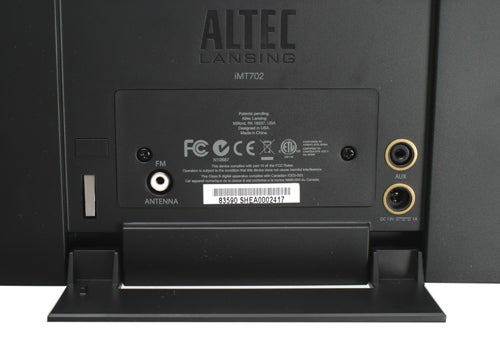 
Sound quality is rarely the prerogative of products like this and the Altec Lansing inMotion Max is no different. However, in light of its performance and its price, it’s hard not to be a little disappointed by it. It’s a solid option if it does what you want, but it could have been better.